Back to homepage
Subscriber Login
Please subscribe to keep reading. You can cancel at any time.
Loading&hellp
You have permission to edit this article.
Edit
In honor of Independence Day, The Daily Progress is providing unlimited access to all of our content from June 28th-July 4th! Presented by an anonymous donor that values the importance of journalism

Traber, Marri and Faiz have worked together to grow their robotics skills since sixth grade and led the middle school “Electro Wizards” team to victory at the regional level three times. The three boys were also the only competitors to form a high school team during the 2020 remote-learning season, with many complications due to COVID-19 mitigation strategies in school and at the competitions.

Monroe Robotics and Lancaster Kinetic Storm won two of their three semifinal rounds. In the Cohort Two championship, they lost the first round, won the second and lost the final round. This put the partnership in second place overall for the day. Other awards are based on the team presentation and judging sessions, which were completed via Zoom on a separate day to minimize contact for COVID-19 safety.

Marri and Faiz have been together since their days in Division I of Lego League at Ruckersville Elementary and have enjoyed the added challenges of the more complex robot design and coding systems involved at the high school level.

“The robot is a lot more complicated,” Marri said. “You’re not messing with plastic Legos where everything almost always aligns—they’re meant to fit together. You’re dealing with parts where you sort of have to make things fit, like sometimes drill holes or cut things or 3D print parts specifically for a certain use. You also have to interact with other teams to actually score points. … In the game itself, there are less tasks but the tasks are harder.”

Faiz said his favorite part of this year’s tournament was the opportunity to learn from other teams at the playoffs—something that was severely limited in last year’s modified competition.

In the FIRST Lego League elementary and middle-school divisions of robotics, a simplified block coding system and robots made from Lego kits complete pre-coded tasks on a tabletop field. By comparison, competitors in FIRST’s high-school competitors fabricate industrial-sized robots from plastic and metal using machine shop power tools or 3D printers and program videogame controllers to allow the robot to respond in real-time to commands from the team.

“We’re coding in Java now instead of the block programming,” said Traber, who added that he was mostly self-taught. “The (FIRST Tech Challenge) program does a great job of providing examples and a lot of documentation that helps teams get started. Last year was a major learning curve for Java, but I think I’ve picked it up. … It’s a lot more complex than the previous (Lego League) block coding but I think it allows for more creativity and customization and individual tweaking of what you want the robot to do.”

FIRST puts out a new theme each year, and this year’s theme revolved around transportation. “From the shipment of packages in rural and urban areas to disaster relief delivery and high-tech air transit, teams will re-imagine faster, more reliable, inclusive and sustainable transportation innovations that better connect and grow communities and economies around the world,” according to firstinspires.org/robotics.

“A lot of the game this year is these cargo elements and you have to move them from a central warehouse location and stack them in certain shipping hubs,” Traber explained. “The shipping hub is going to be on the field and we’re going to get points depending on what level we put them on.”

The shipping hub is a circular device that tips to one side or the other depending how the weight is distributed among its three-tiered shelves. As the team only gets points for cargo cubes resting on the hub, the robot has to find, lift and drop the cubes so that they stay on the hub without falling or tipping over; the top tier is the smallest and worth the most points.

“Because it’s a circle on the bottom, this thing tilts around a lot,” Traber said. “Part of the strategy is that some of the cubes are weighted, so we get more points if this is balanced. If you have a lot on one side, that’s going to give you less points … so you have to go about sort of figuring out how you’re going to distribute the cubes on here to get it balanced.”

In one portion of the competition the robot is controlled by a driver using a videogame controller; in the other portion, the robot must function autonomously using pre-coded behaviors. In autonomous mode, the robot has to pick up cubes from one of three random spots on the playing field and drop it in a certain level of the hub depending on where it was found.

“The programming for the autonomous mode was redesigned and we fixed a servo that malfunctioned last minute,” recalled Faiz of late-night work session he and two of his teammates held the night before the competition.

Cameras and sensors mounted on the robot help it to detect the cube and measure distance from various objects. However, Traber says it can be difficult to account for the activities of the other robots on the field.

“On our game field, you can have up to four robots because there’s two per team and there are two teams running at the same time … so you have to coordinate with the other team that you’re paired up with during the competition,” he said.

Luckily, the team received an infusion of funding from the schools due to many extracurricular activities not taking place in the past year.

“Last year was a challenge for us because we had barely any parts—they’re all hand-me-downs,” Traber said. “But the school was able to get funds for us and were able to donate $5,000 worth of equipment to our robotics team this year, so we’re very happy and very fortunate that they were able to do that. Now we have a bunch of new parts that we’re able to use and we’ve done a lot better than we did last year so far.”

One of the fun parts of working in the high school’s “Fab Lab” (short for fabrication lab) is the use of the school’s 3D printer. According to Marri, some parts can’t be found in stores; rather than changing their imagined design, the team will create the specific piece themselves on the 3D printer.

“We have a 3D printer at home and my dad builds things,” said sophomore Jasmine Haggerty, who studied coding in middle school and just recently joined the team. “He just kind of builds things for fun so I was like you know what, I’m going to try it out—and now I’m here and it’s a lot of fun.”

“I’ve always liked just randomly building things,” said freshman Neveah Gray, another new member this year. “My parents will look out the window and I’ll be taking apart bikes and stuff. (I enjoy building) anything I can get my hands on.”

Freshman Aidan Miller also has a 3D printer at home and was first introduced to robotics through Lego League in elementary school.

“My favorite part was working together with Lancaster Kinetic Storm in the final rounds of the playoffs and setting a new personal record on points,” Miller said. He added that the team hopes to speed up its cargo delivery system before the next competition.

According to Traber, one of the best advances to their robot design was the addition of omni wheels, which allow the robot to move left and right or turn on the spot without moving forward—much like a zero-turn mower.

“I’ve had to do research on this… but this is using trigonometry to figure out, depending on where I want the robot to go, which way each wheel has to turn,” he said, pointing to a section of his Java code.

Traber has taken on a leadership role this year with helping to teach coding to some of the newer members, rather than dividing up the coding and building tasks entirely to different students.

“A lot of the people who have done robotics in past years are very close friends of mine and it was something that they talked about a lot, and it sounded fun,” said sophomore Amy Genz, who traveled with the team to her first meet this year. “I’m getting back into coding. … I’m not the best at it currently but I’m hoping to get better at it.”

Traber’s own coding has advanced significantly since middle school.

“One of the things we wanted to minimize is the amount of human error that could happen during our game, so that one arm movement—the up and drop—you just hit one button and it does the entire thing,” he said. “You don’t have to worry about how far you have to go up, when you have to turn it; you just click and it goes.”

The team will compete in another qualifier Jan. 29 in Harrisonburg to see if they get a chance to compete on the state level. Visit events.firstchesapeake.org for details or twitch.tv/firstchesapeake to watch the competition.

With the difficulty of planning for social distancing, modified school schedules and with many students attending school virtually or in a ble… 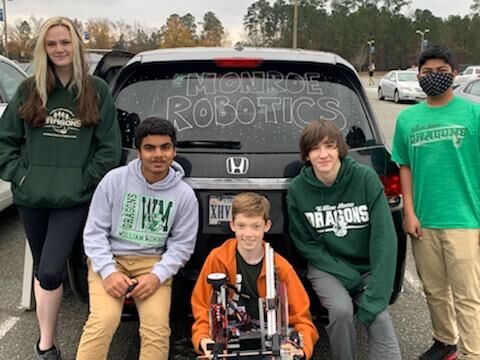 From left to right are, Amy Genz, Akhil Marri, Aidan Miller, Thomas Traber and Mushtaq Faiz traveled to Glen Allen to represent Monroe Robotics at the first of two qualifying meets for the season. 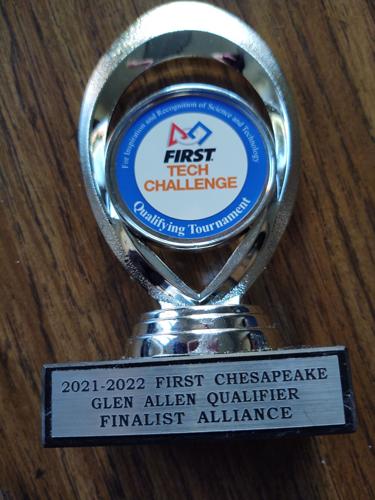 Monroe Robotics brought home the second-place trophy and will compete in a second meet Jan. 29 in Harrisonburg. 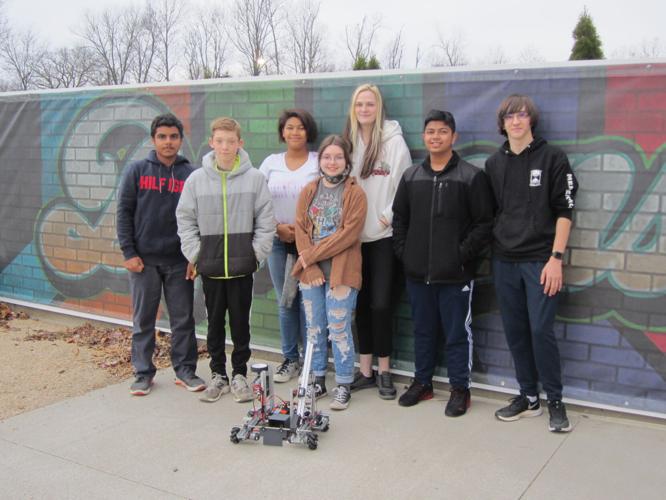 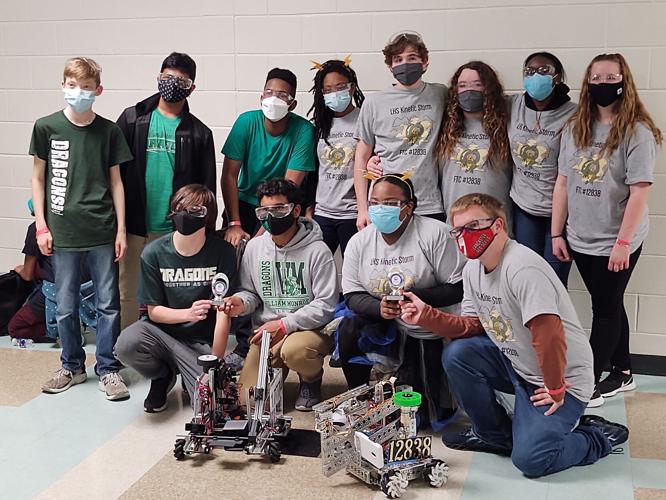 The members of Monroe Robotics and Lancaster Kinetic Storm teamed up to take second place in the robot games at last month’s competition. 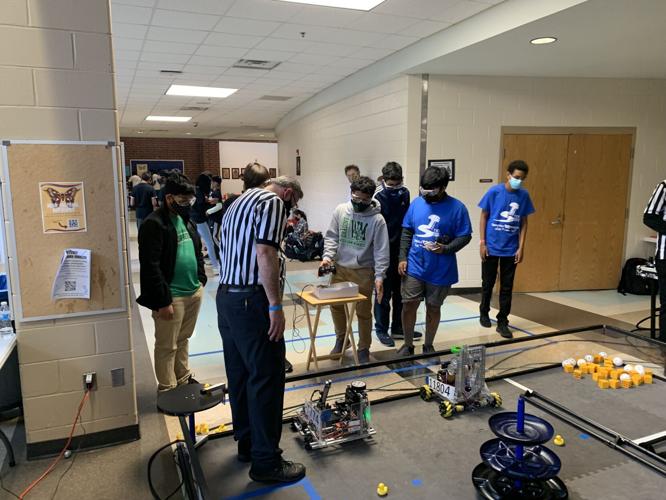 Monroe Robotics and Lancaster Kinetic Storm teamed up to take on the competition at the regional qualifier match Dec. 11 in Glen Allen, Virginia. The next match will take place in Harrisonburg Jan. 29. 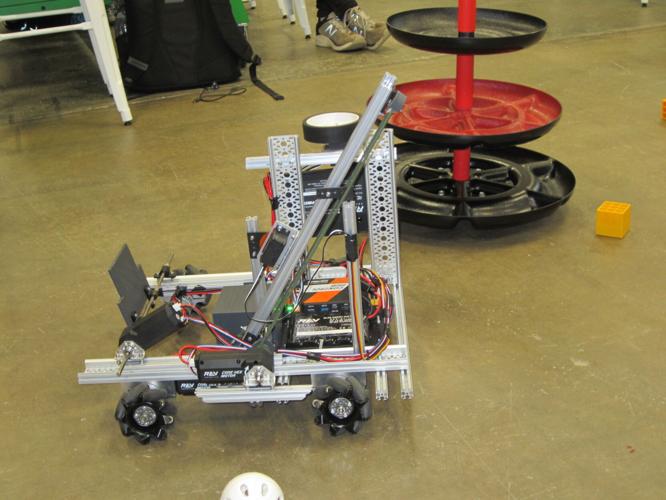 The “William Monrobot,” as he is affectionately known by the students, features omni wheels which allow it to slide side to side and turn on a central axis.