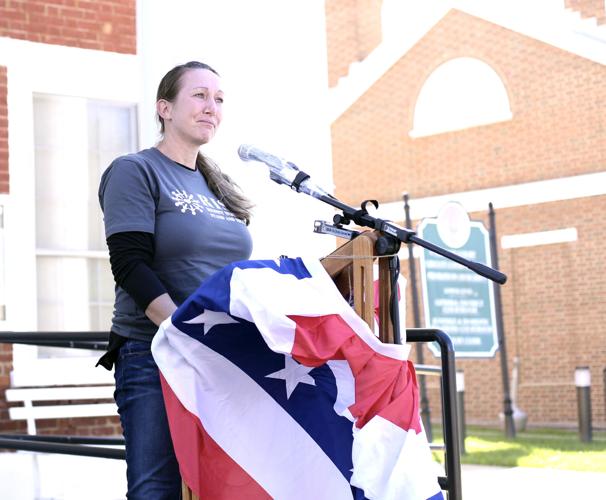 Megan Battaile, one of the cofounders of Resist Injustice Stand and Educate (RISE) holds back tears after listening to several speakers, including Shiloh Baptist Church Pastor the Rev. Dr. Harrison Williams. 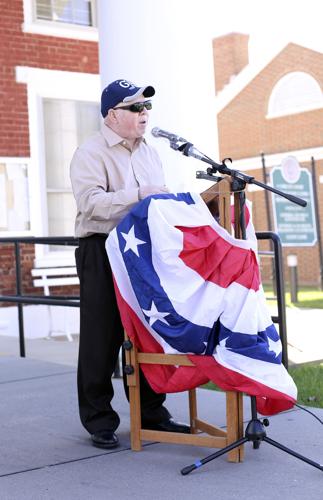 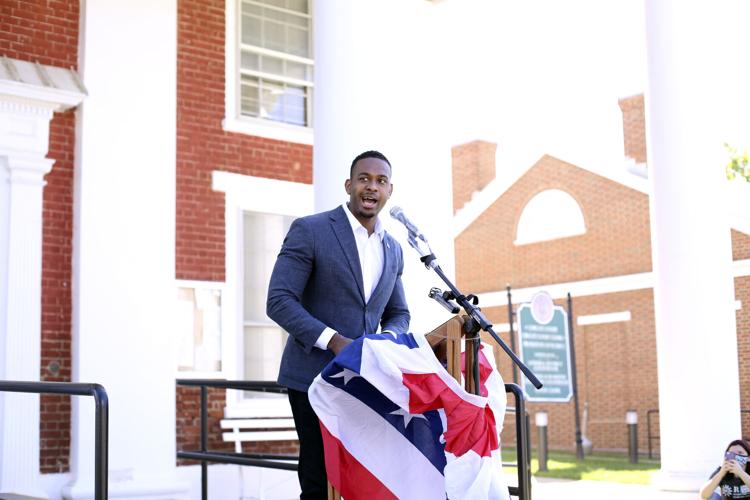 Dr. Cameron Webb is running as the Democratic challenger for the 5th Congressional District. 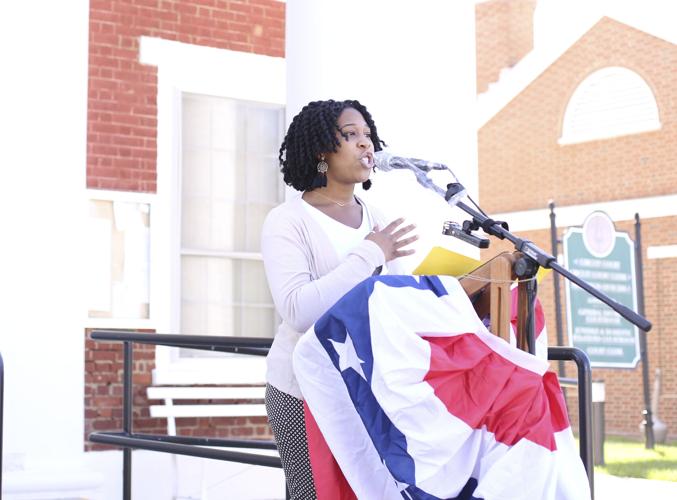 William Monroe High School 2018 graduate Shalita Kenney told the audience to vote “like your life depends on it.” 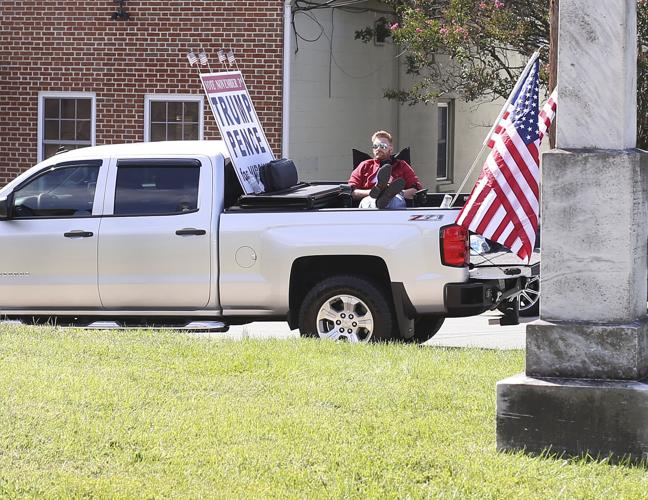 Steve Kruskamp participated in a silent counterprotest with “Trump/Pence” signs, though he remained in his vehicle the entire event. 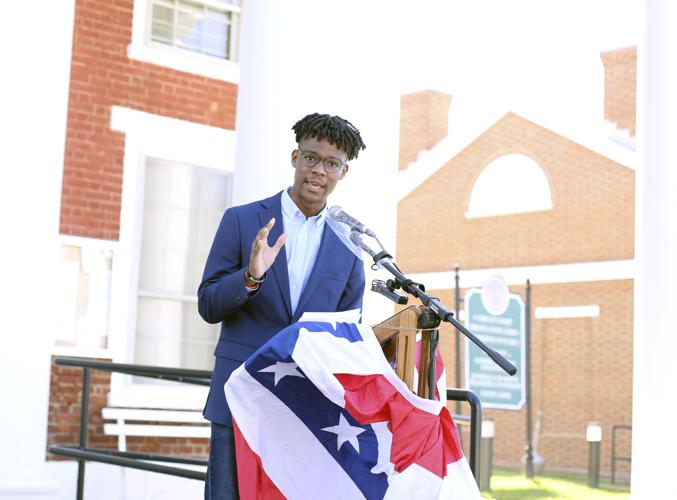 O’Brian Martin, a senior at Orange County High School said the youth of America will not allow the message of John Lewis to be forgotten.

Dr. Cameron Webb, Democratic 5th District candidate, spoke to a crowd of approximately 120 people as one of many speakers during the voting block party Saturday, Sept. 19, in Stanardsville. The event was hosted by local organization Resist Injustice Stand and Educate (RISE) in Courthouse Square.

“Historically, there has been a lack of voter turnout, which results in the lack of representation in government,” said Kenney, now a senior at George Mason University where she’s majoring in criminology law and society. “It is our duty, as Americans, to show up and show out to elect those who will represent the good of the nation, not just their personal needs.”

Kenney told the audience that it’s necessary to make sure you’re still registered to vote and to help people if they need a ride to the polling location.

“We can apply for an absentee ballot when we have even the slightest inkling that voting in person may not be possible,” she said. “Sharing information on each candidate, or even providing information on how to obtain that information, is a part of our civic duty.”

Kenney was one of the students instrumental in organizing a walkout at William Monroe after the Marjory Stoneman Douglas High School shooting in 2018 that left 17 dead.

“In college, I have participated in several campaigns, have marched on Washington and have joined organizations and their corresponding executive boards,” she said. “I say all this to show that I enjoy being involved in working with others toward a common goal that reflects my interest in law and government.”

Kenney said voters are the “shot-callers,” as elected officials answer to all constituents they serve, not just those who elected them in.

“I haven’t even touched on the fact that all of our forefathers fought for our right to vote and to elect public servants—no matter your age, your race, your ethnicity or even gender,” she said.

O’Brian Martin is a senior in Orange County High School and will be the school board’s student representative this year.

Martin upheld the memory of Civil Rights icon John Robert Lewis, who passed away in July, saying voting and participating in the democratic process are needed.

“(Lewis) said it is not enough to say it’ll get better by and by. He said each of us has a moral obligation to stand up, speak up and speak out. When you see something that is not right, you must say something, you must do something,” Martin said. “Ordinary people with extraordinary vision can redeem the soul of this nation. It can redeem the soul of this nation by getting into what I call ‘good trouble,’ getting into what I can ‘necessary trouble.’ The vote is the most powerful nonviolent change agent we have in this democratic society. You must use it because it is not guaranteed and you can lose it.”

“As I stated earlier, those words came straight from the mouth of John Lewis while he was on his deathbed, breathing his last breaths of air; he passed a torch down to us, the youth,” Martin added.

He told the audience that enough is enough and good trouble is now necessary.

“I am so sick and tired of being sick and tired. But, luckily, today is the day that I am finally cured because the change that I’ve been waiting sick for has finally arrived,” Martin said. “That change that I’m talking about, that medication that I so desperately need, goes by the name of voting.”

“The prophet Micah condemns the leaders of his people for injustice perpetrated against the poor and the powerless, complacency that nothing is wrong and the abuse of power by both political and religious leaders,” Williams said. “They say they are good Jews, they say that they go to temple and we observe every Sabbath and we give our offerings. But Micah says to them, ‘What does God expect from us?’ Then Micah gives them an answer, ‘What does the Lord require of you? To do justice. To love mercy. And to walk humbly with your God.’ The same question is being asked of us today.”

Williams said those who do not vote are saying yes to everything going on.

“We are intelligent enough to understand that Black lives do matter, right? Black lives do matter and black lives matter as much as blue lives matter,” Williams said. “It does not mean that only black lives matter. We’re concerned about all lives. We don’t have to be for one and against the other. That is an insult to our intelligence. Our hearts grieved for the five police officers killed in Dallas, and injuring nine others (in 2016). Their families are still in our prayers. We need not draw a line in the sand and be forced to choose sides, because no one wins with that philosophy. As Christians, our claim would be all lives matter.”

Webb said to get over the tensions that have plagued the country for 400 years is to spend time with each other and talk about equity, justice and freedom.

“We have had that tension, it has not disappeared, it has not gone away, because we never turned to face it,” he said.

The desire to serve was something that was woven into Webb’s family of six children from their parents. His mother was a public school teacher for 30 years and his father worked training law enforcement in the federal government.

“I remember asking my dad one day ‘why do you do this work, why are you so invested in training?’” Webb said. “My dad said, ‘Cameron, I grew up in Louisiana in the 1950s and 60s, I saw firsthand the clashes between law enforcement and the citizens they were sworn to protect. I know good officers when I see them. I know bad officers when I see them. And I know the thing that makes the difference is the training. By working in hiring and working in training, I’m making a difference’.”

Friday, Sept. 18 was the first day of early in-person voting in Virginia and Webb said he went to vote.

“It’s a privilege for me as a Black man in America,” he said. “I recognize it is something that was earned by the blood and sweat and tears of my ancestors and that without people sacrificing and doing things that were seemingly unpopular at the time, I never would have been able to walk into that registrar’s office yesterday.”

Webb said he decided to run for Congress because forces have been trying to pull people apart instead of bringing them together.

Due to circumstances beyond our control, our shelter has suffered the loss of both our savings account and our status as a non-profit 501©3 ch…

The holidays are quickly approaching and Stanardsville is gearing up for a Main Street Magical Holiday Celebration for the community on December 3.

Memories of happy times came easily to the teammates and other speakers who came to remember Lavel Davis, Jr., Devin Chandler and D’Sean Perry…

School Board and Board of Supervisors briefs

Megan Battaile, one of the cofounders of Resist Injustice Stand and Educate (RISE) holds back tears after listening to several speakers, including Shiloh Baptist Church Pastor the Rev. Dr. Harrison Williams.

Dr. Cameron Webb is running as the Democratic challenger for the 5th Congressional District.

William Monroe High School 2018 graduate Shalita Kenney told the audience to vote “like your life depends on it.”

Steve Kruskamp participated in a silent counterprotest with “Trump/Pence” signs, though he remained in his vehicle the entire event.

O’Brian Martin, a senior at Orange County High School said the youth of America will not allow the message of John Lewis to be forgotten.