Sheep farmer/artist uses natural dyes to color her own wool

Whether shopping for your back-to-school fall fashions or sorting your laundry, everyone has a favorite color when it comes to clothing and other textiles. In fact, evidence from ancient Egyptian tombs suggests humans have been dyeing their clothes for more than 4,000 years. Historically, dyes were derived from sources found in nature such as vegetables, plants, berries, trees and insects. Synthetic dyes were invented during the Industrial Revolution and have risen in use since the 1850s, according to “The Evolution of Textile Dyes” on keycolur.net.

Although commercial clothing manufacturers go to great length to ensure their synthetic chemical dyes are safe for everyday use, natural dyes can be just as colorful—and are fun to create, as well. Local sheep herderess, weaver and artist Ann Vonnegut sells colorful creations at annual craft shows and fiber festivals—and she has invested decades into exploring every aspect of the wool medium. From raising and caring for her Leicester Longwool sheep to shearing, cleaning and combing the wool, spinning fiber into yarn and weaving tapestries, towels, rugs and more—and yes, she makes her own natural dyes, as well.

“I took a natural dye class some years ago through the Handweavers Guild of America,” Vonnegut said. “They have a conference every couple of years and this class was held in Albuquerque, NM in 2020.”

Vonnegut first became interested in owning her own sheep after working with the National Park Service at Oxen Hill Farm in Maryland, where she learned how to spin wool.

“I learned how to spin while I was there, and then the spinning went to dyeing, and then from dyeing I got into wanting to have a flock of sheep,” she said. “I wanted to raise a rare breed of sheep and so I did some research on the Leicester Longwool; there aren’t that many breeders that raise this particular kind of sheep. … I thought it would be nice to get a place out in the country and have sheep and just one thing led to another.”

The Leicester Longwool was popular during the colonial period in America but was originally developed by agriculturist Robert Bakewell in Leicestershire, England, in the late 1700s. Bakewell’s aim was to create a breed that was a producer of both long, course wool and high-quality meat.

“It has long, lustrous wool for spinning and it’s great for dyeing,” Vonnegut said.

Compared to the Suffolk sheep, which is more common in the South with its white wool and black face and legs, the Leicester Longwool has very long, slow-growing dense wool that grows into curls. They are very docile, according to the Livestock Conservancy—which lists this particular breed as “threatened” and a priority for conservation. They were brought back from near extinction in the early 1900s and came to Virginia via Colonial Williamsburg, which is where Vonnegut first heard of them.

Once a year, the sheep shearer comes to call and relieves the small flock of sheep of their heavy wool. After cleaning the wool to remove debris and the oils (called lanolin) from the fiber, there are many different techniques to turn the raw wool into a finished product.

“With Leicester Longwool, the wool is a very long lock, unlike Merino, which has a shorter lock,” Vonnegut explained, pulling several locks of wool out of a bucket and sliding them onto a metal comb in her makeshift studio. “This is called combing, and there is such a thing as carding—two different processes for worsted or for woolen. A lot depends on how you process it with combs or with carding.”

For worsted woolen suits such as Brooks Brothers or Pendleton, wool is combed to keep too much air from getting into the fibers. For a warmer outer garment such as a fishermen’s sweater, you card the wool to keep the air in the fibers before spinning.

“Fishermen, back in the day, would want a lot of air in their woolen sweaters because … the heat from your body warms up the air molecules trapped in the fluffiness of the wool to keep you warm,” Vonnegut said. “You don’t want something like a suit on (because) it’s not as warm as a woolen sweater.”

After combing the locks of wool until they are nice and soft, Vonnegut pulls the soft fibers through a card with a small opening in it to wrap the long fiber into a ball, which will then be spun on the wheel to begin the process of turning fibers into yarn. Generally, the fiber is spun two or three times with the strands wrapping around one another to form the yarn.

Like a farmer selling bread baked from his own grain, Vonnegut controls all parts of the process—from raising the sheep to shearing day, cleaning the wool, spinning and dyeing and weaving, every aspect has been practiced and studied over the years. Each step comes with its own choices that affect the qualities of the final product, from the type and amount of ingredients used to how long it’s allowed to soak, which type of fiber is used and how it’s treated before and after dyeing.

If you’re not growing your own ingredients (some dye plants only grow in particular parts of the world), there are a number of online sellers that provide ingredients for the natural dye enthusiast. Vonnegut gets her ingredients from different growers in Asheville, N.C., and parts of California as well as Wiama—a small family business in British Columbia—where weld flowers grow wild.

“I’ve gotten away from chemical dyes and I’m doing more natural dyes, which takes longer because I’m cooking over a fire and it’s just a longer process,” she said. “The chemicals do give you brighter colors and they’re definitely lightfast (not prone to discoloration when exposed to light), but I like the muted colors of the natural (dyes) and I just think they’re safer to use overall.”

While you may think of fresh blueberries and raspberries as materials that give natural color, many natural dyes actually come from roots, leaves, vegetables and even insects.

“You’re probably familiar with indigo and onion and we have madder and logwood—these are all different plants,” Vonnegut said. “There is an insect called Cochineal and that produces a red color, too. Madder is what was used in the British redcoats during the Revolution period—that’s the brighter red.”

Before you start adding roots and flowers to your fibers, however, there’s one more important step: mordanting. A mordant is a substance used to permanently fix a dye to the fibers, enhancing light- and wash-fastness. The word “mordant” comes from the French verb meaning “to bite.”

Some dyes can be used without a mordant, but results will vary depending on the color and fiber used. A mordant is often derived from metal, and Vonnegut says her favorite mordant to work with is alum, a form of aluminum sulfate.

“A mordant gives a ‘bite’ to the dye so the dye will stay on the wool,” Vonnegut said. “A lot of the chemical mordants you’ve got to be very, very careful with. I don’t even know if you can find chrome any more—it’s very toxic. In order to make iron, a lot of people will take rusty nails and let it sit in water for a number of days and that will be their mordant.”

The dyeing process, according to Ann Vonnegut

“The longer it sits in the water, the deeper the color,” said Vonnegut, who periodically checked on her fibers to see the orange color as it deepened over the course of an hour in the onion-skin mixture.

Vonnegut has taken various classes over the years and enjoys trying out different techniques from books or from her circle of spinning and dyeing friends, some of whom she met through the Art Guild of Greene County.

“I’m not a big operator—I’m not on Etsy—but I do sell at shows like the Fall Fiber Festival and Montpelier Sheep Dog Trials and up in the town of Berryville there’s a show called the Shenandoah Valley Fiber Festival,” she said. “I started spinning back in the early 1990s, but really the dyeing has been more recent.”

Vonnegut is currently working on some yarns as well as kitchen towels, placemats, rugs and small patterned tapestries. If you want to see her wares, you can find her at the Fall Fiber Festival, Oct. 2-3 at Montpelier. Visit fallfiberfestival.org for more information.

During a time of pandemic, it’s good to be able to both work and practice creativity from the comfort of your home. Especially if that home is…

The 18 residents of Anne Vonnegut’s Autumn Vista Farm were treated to a bit of a spa day on Feb. 15 when Kevin Ford, international sheep shear…

From fleece to art

What is art? Well, that is like asking what is beauty? Anne Vonnegut of Dyke spins and weaves fleece and fiber to create both. 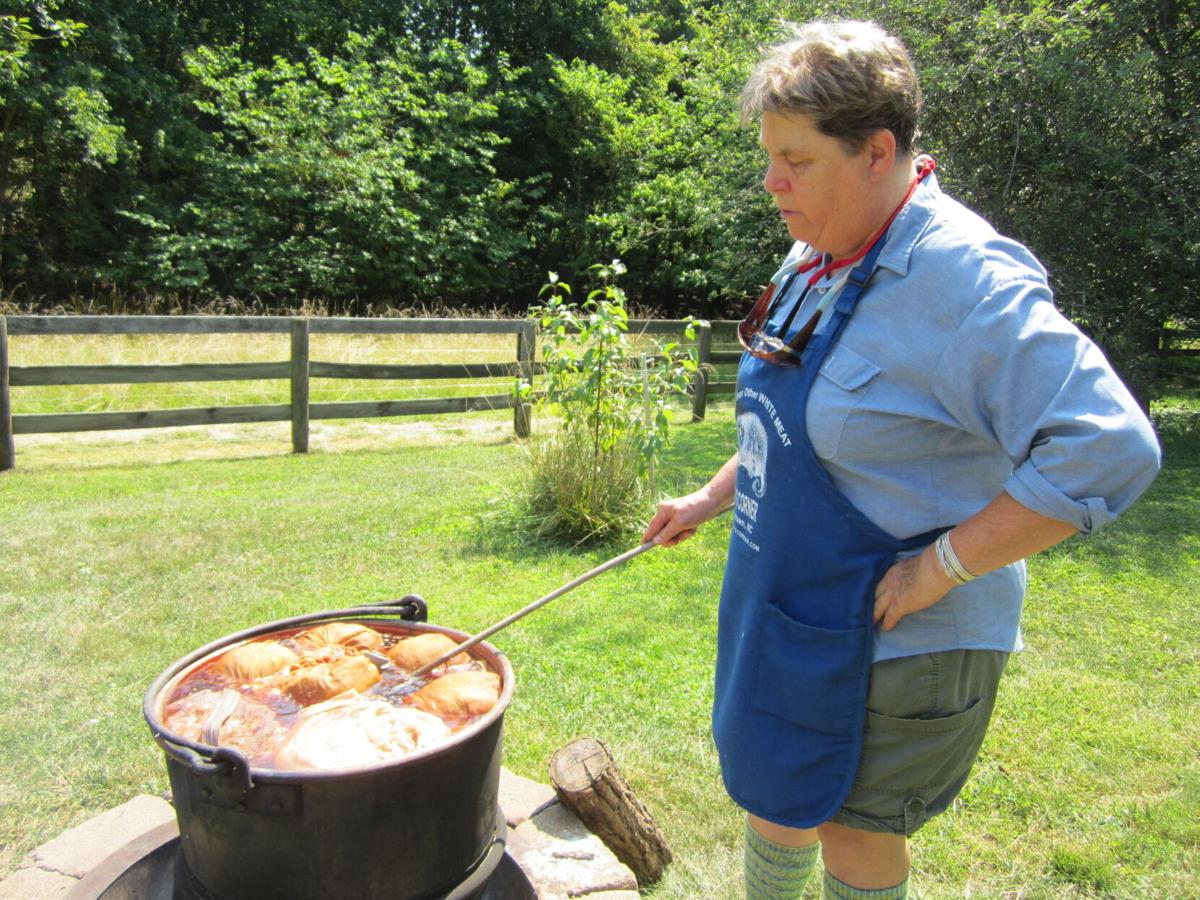 Dyke sheep farmer Ann Vonnegut cooks locks of wool over a fire with alum and onion skins to produce a natural orange color. 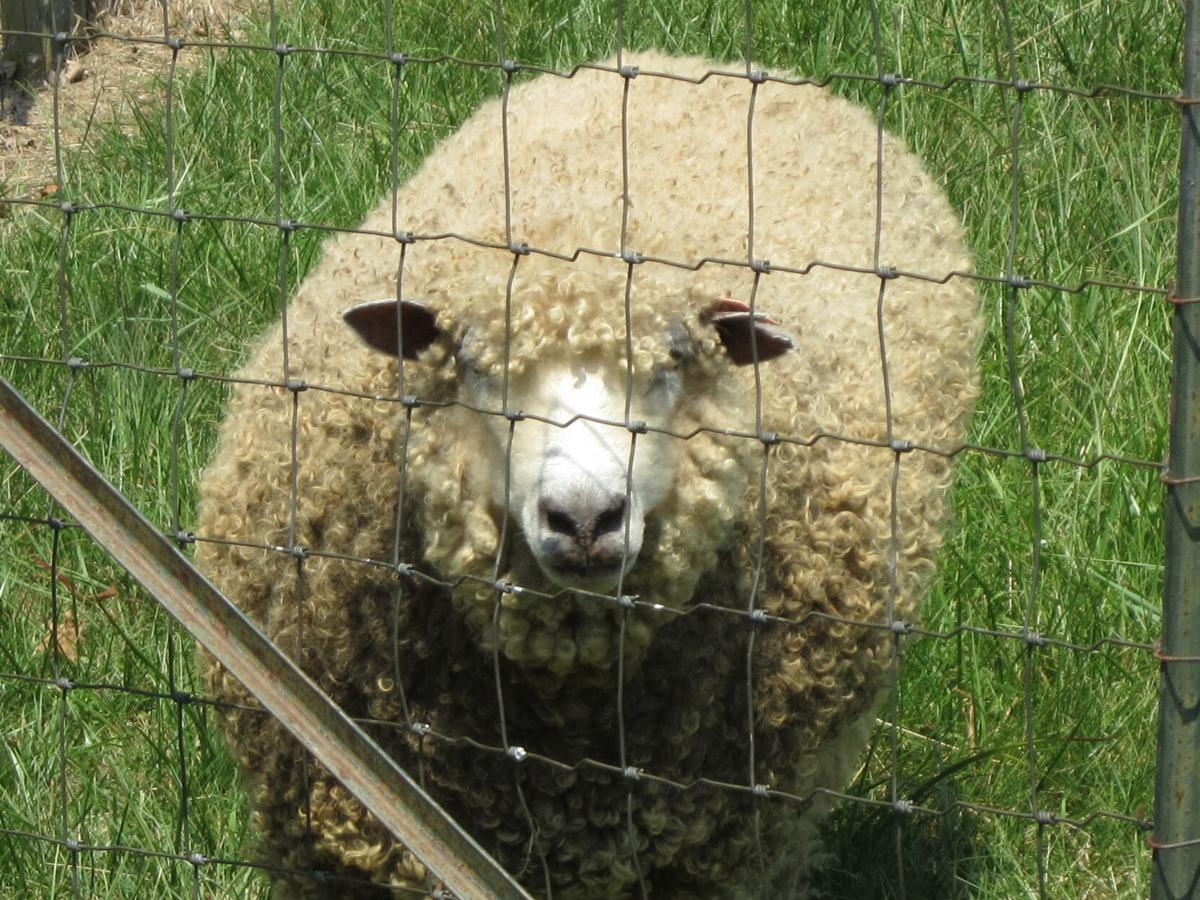 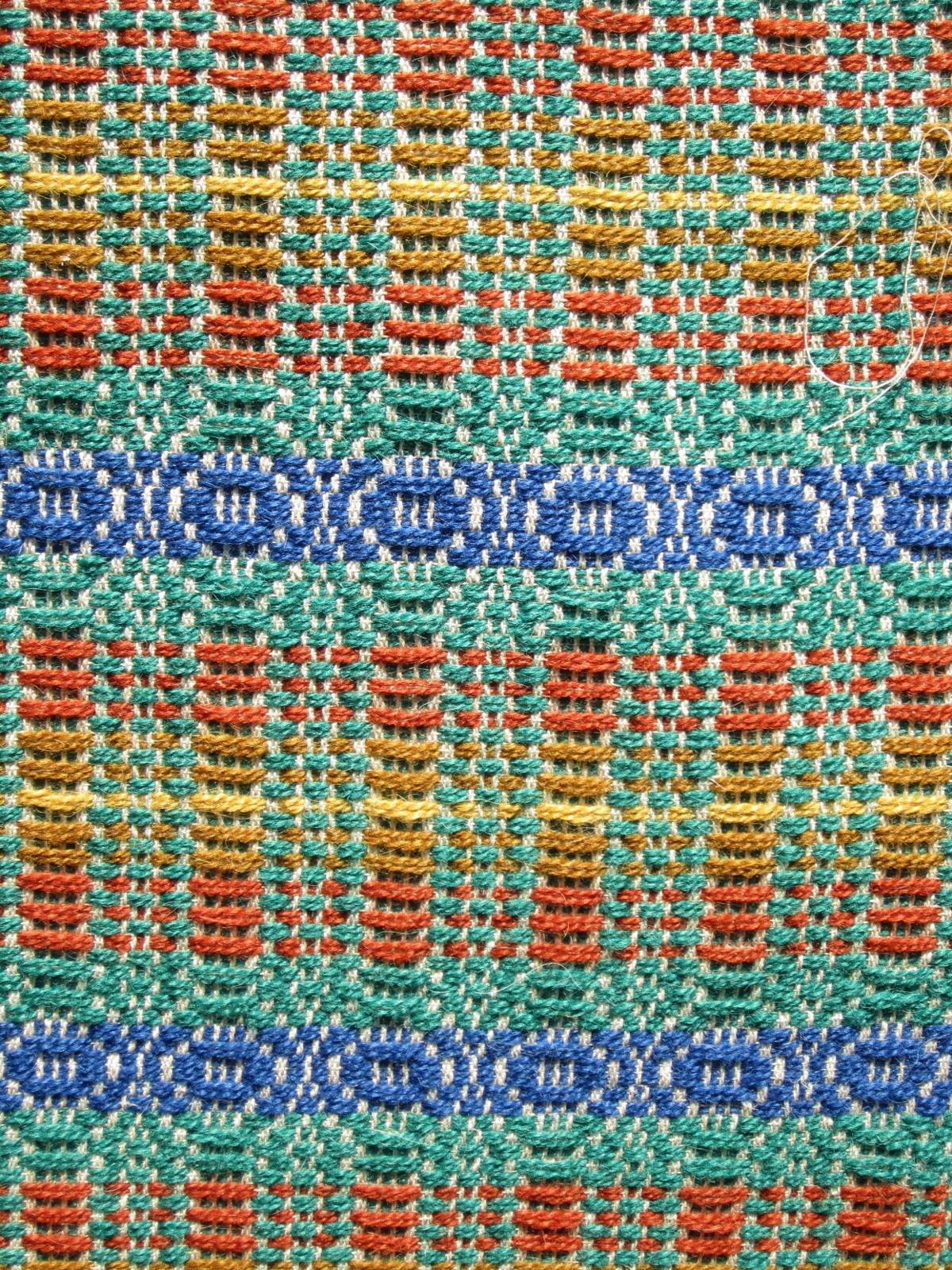 A finished tapestry (this one used chemical dyes) made by Vonnegut on the loom in her home studio. 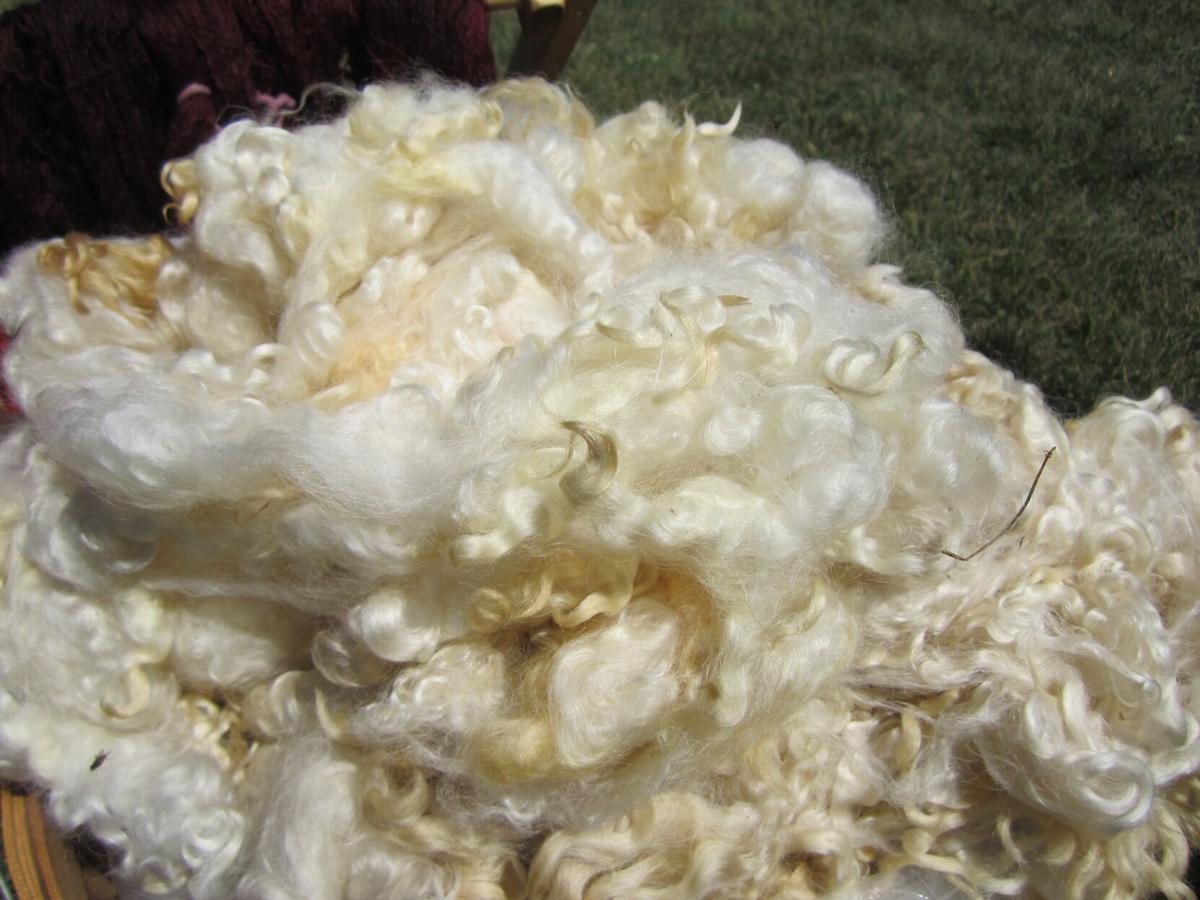 The Leicester Longwool has very long, slow-growing dense wool that grows into curls. Once processed, it is great for outerwear, rugs or tapestries. Merino wool, on the other hand, is much softer and is good for blankets and baby clothes. 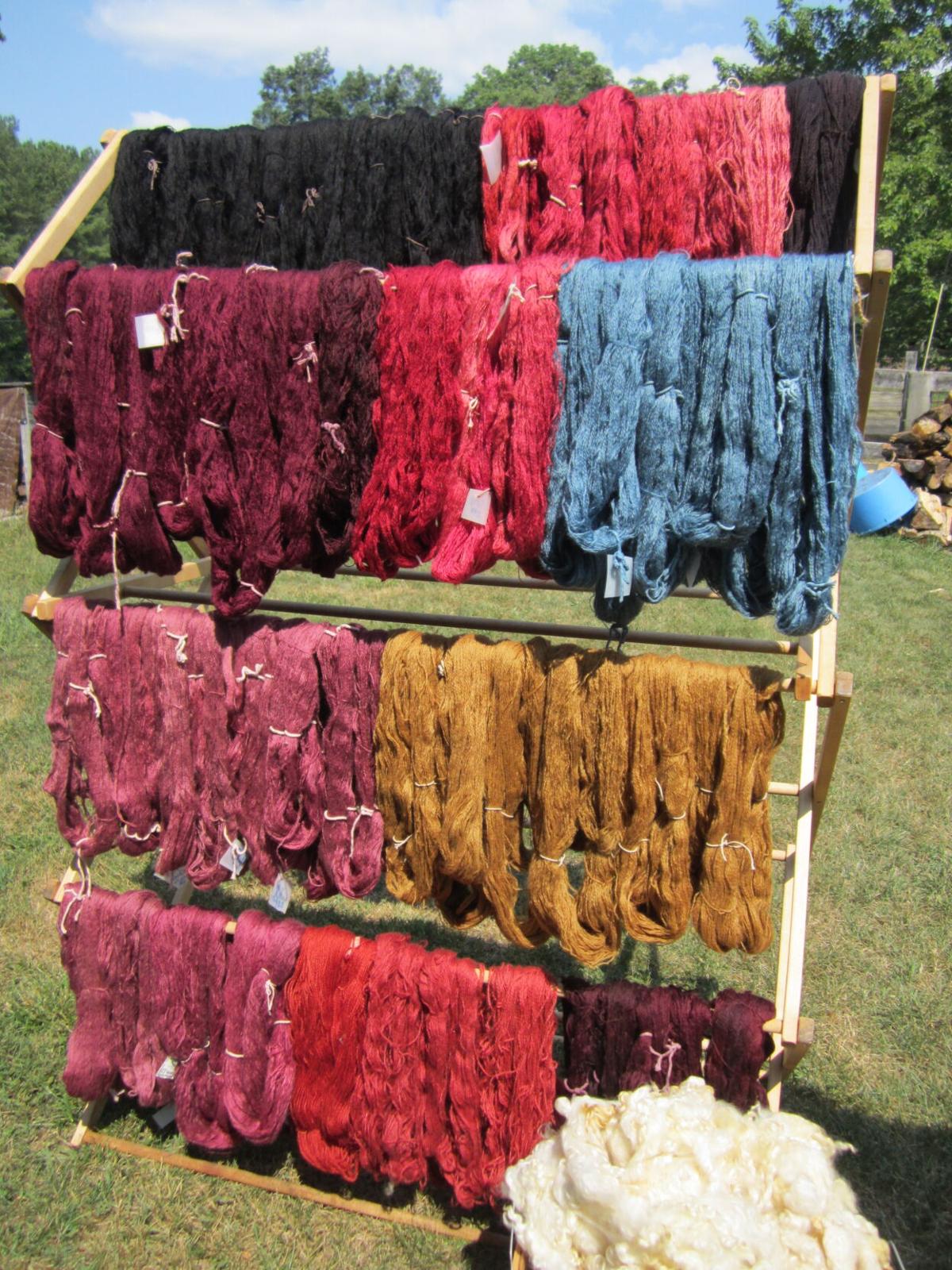 Finished yarn hang on a drying rack in Vonnegut's yard. The blue comes from indigo; orange is from onion skins; black from logwood; reds from madder (bright red) and cochineal (red/pink). 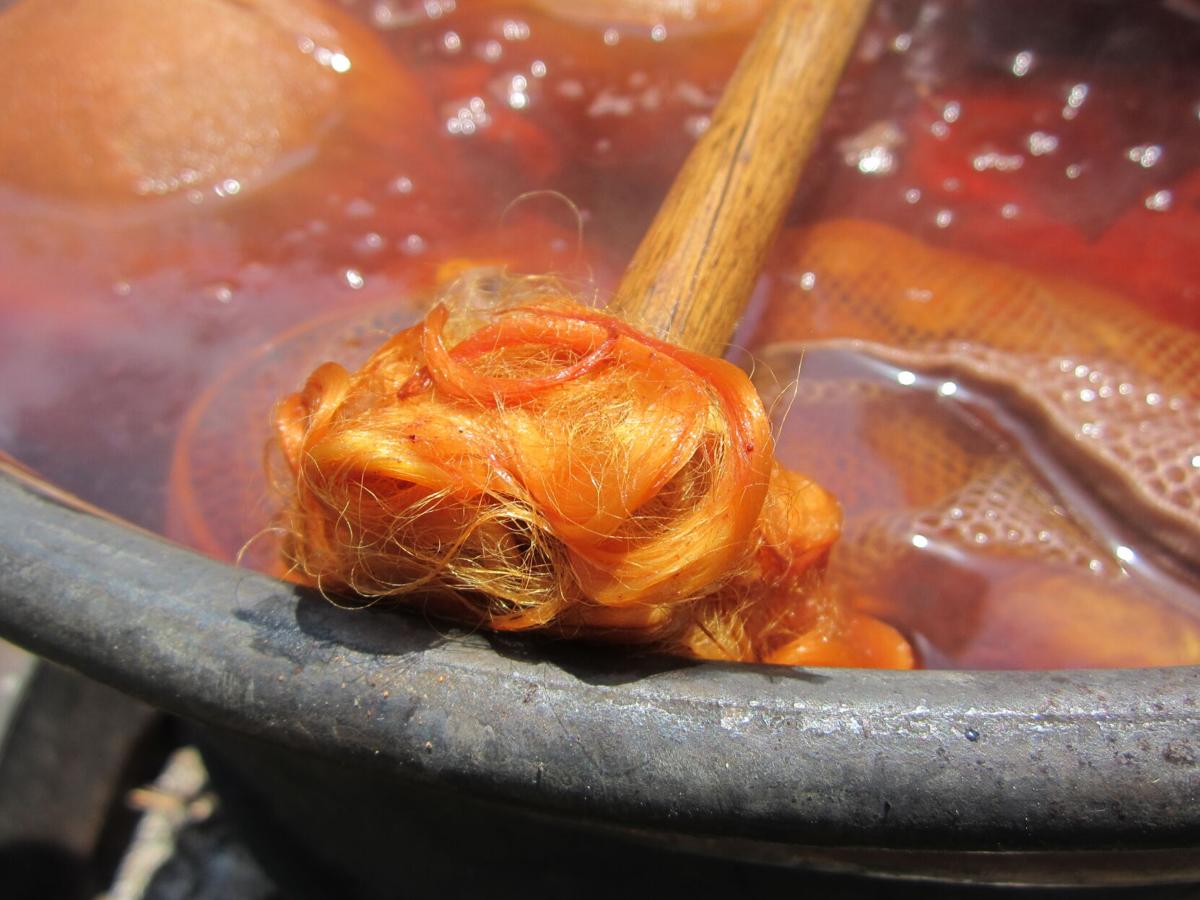 The wool’s final color after cooking with onion skins for over an hour. 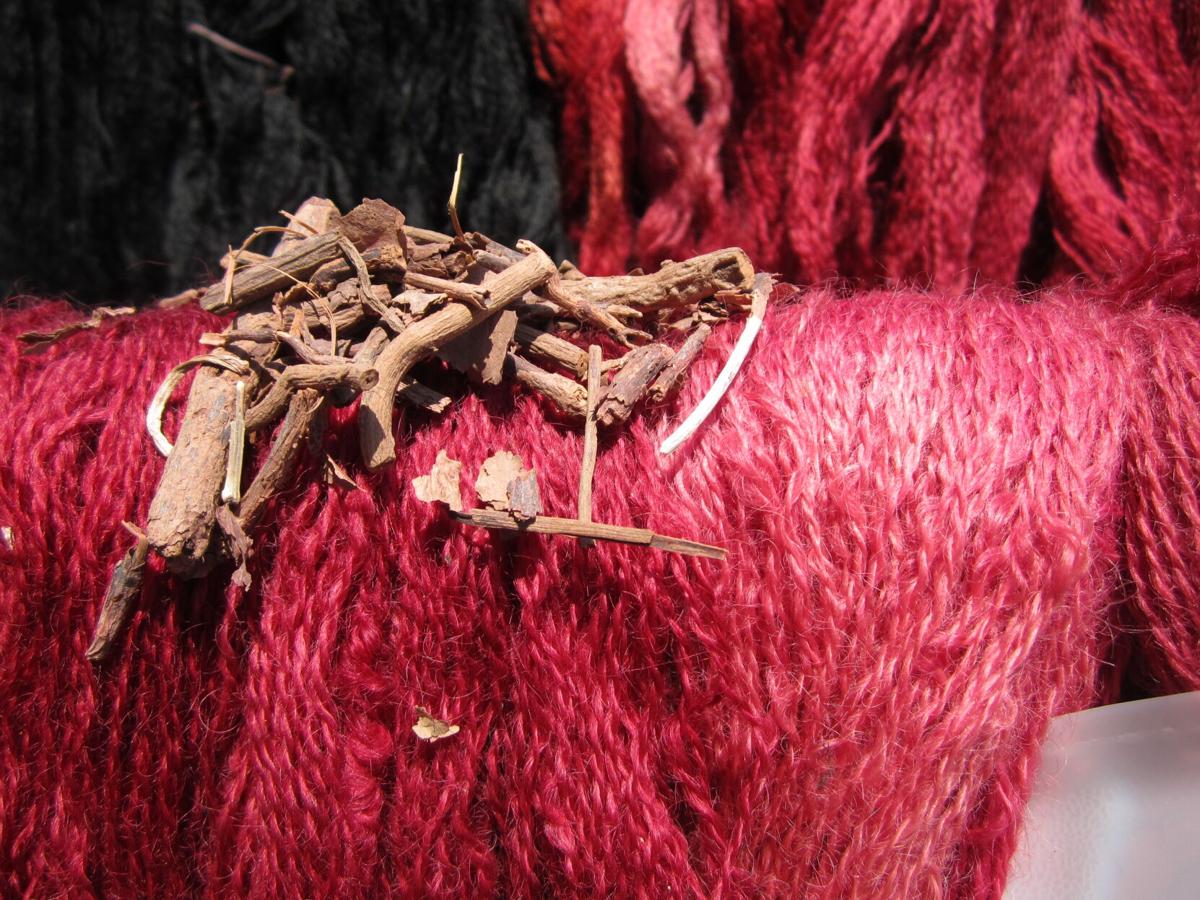 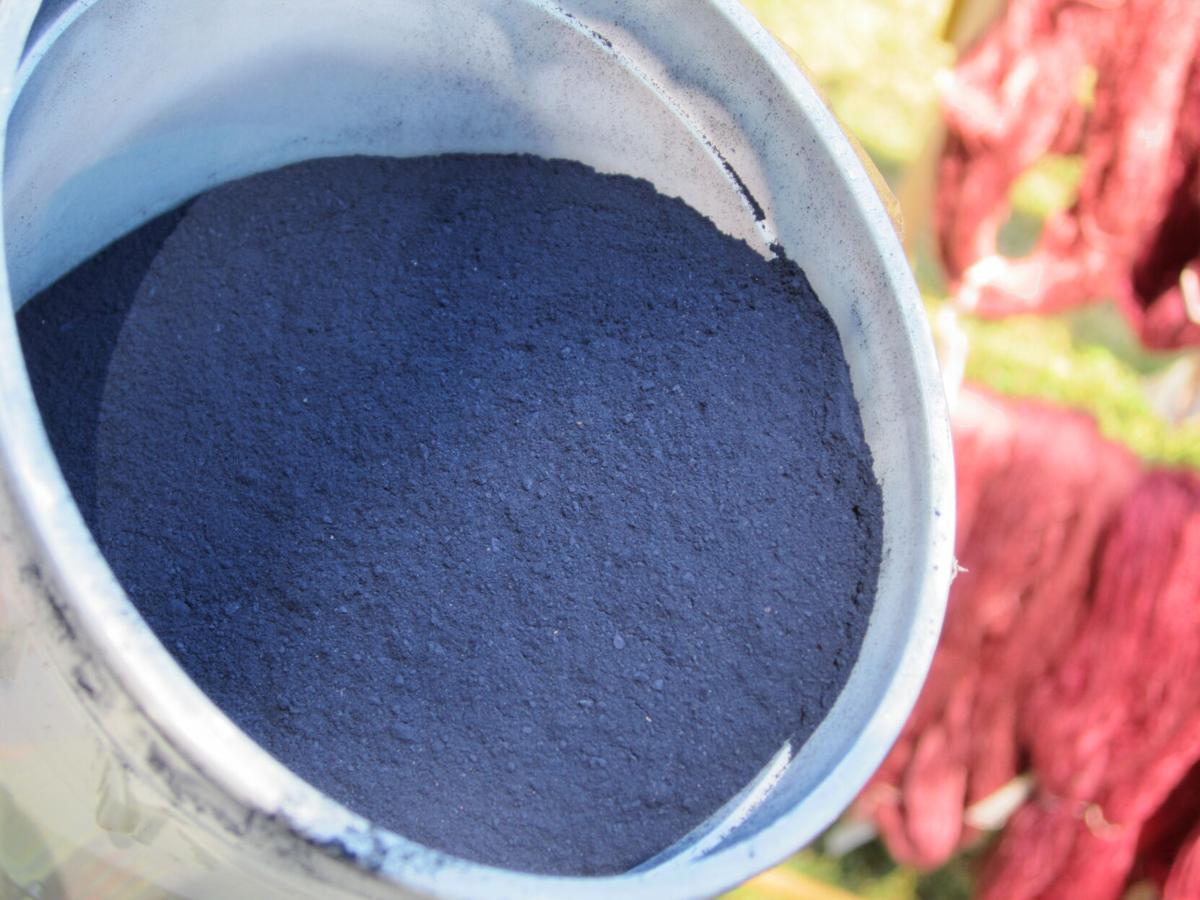 Japanese indigo is a popular blue dye. Vonnegut gets hers in powder form.