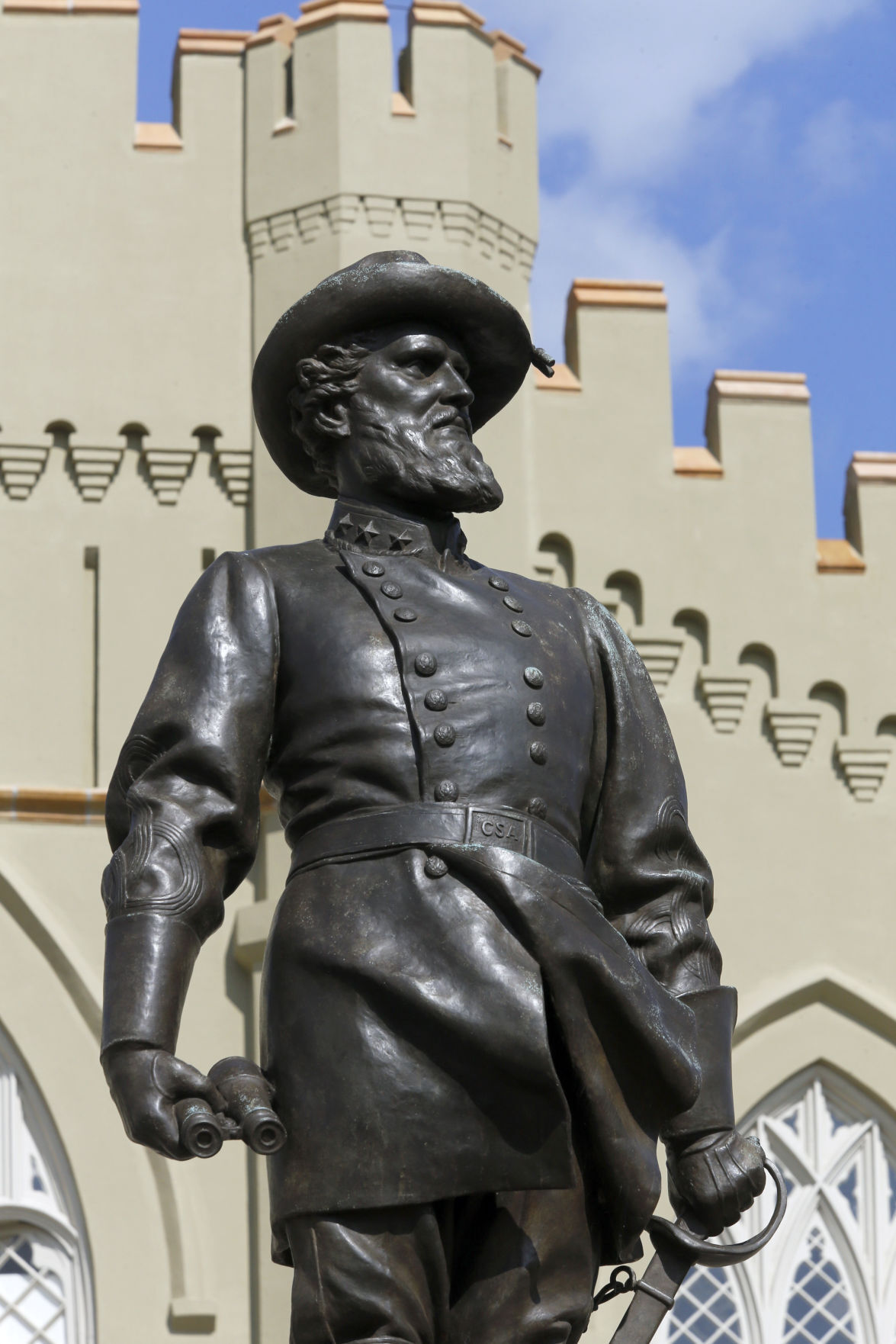 The statue of Confederate Gen. Thomas J. “Stonewall” Jackson stands in front of the barracks at the Virginia Military Institute in Lexington. A new letter from four alumni calls on VMI to form a commission to reassess the school’s traditions, building names and monuments, including the Jackson statue. Four-hundred people added their names to the letter in the first 24 hours after it was published online. 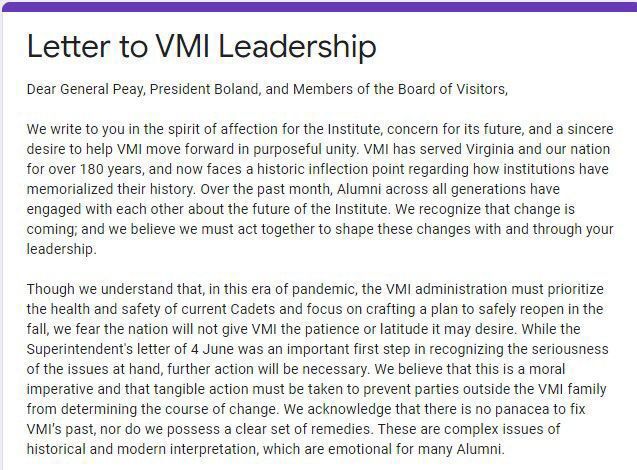 A screen capture of part of the letter to the Virginia Military Institute's leadership from four alumni seeking a review of the school's ties to Confederate history and symbolism. The full letter can be read online.

The statue of Confederate Gen. Thomas J. “Stonewall” Jackson stands in front of the barracks at the Virginia Military Institute in Lexington. A new letter from four alumni calls on VMI to form a commission to reassess the school’s traditions, building names and monuments, including the Jackson statue. Four-hundred people added their names to the letter in the first 24 hours after it was published online.

A screen capture of part of the letter to the Virginia Military Institute's leadership from four alumni seeking a review of the school's ties to Confederate history and symbolism. The full letter can be read online.

Four Virginia Military Institute alumni have drafted a letter to the military college’s leadership requesting a commission be formed to examine and reassess the school’s traditions, monuments, and building names. The letter, published Tuesday night, was signed by roughly 400 people within 24 hours, ranging from the class of 1948 to current cadets. Its creation was spurred by recent debate within the VMI community over the institute’s future and how its history — particularly its ties to the Confederacy — should be memorialized.

“We believe that this is a moral imperative and that tangible action must be taken to prevent parties outside the VMI family from determining the course of change,” the letter states. “We acknowledge that there is no panacea to fix VMI’s past, nor do we possess a clear set of remedies. These are complex issues of historical and modern interpretation, which are emotional for many Alumni.”

The letter’s creators, Donnie Hasseltine, Conor Powell, Mike Purdy and Shah Rahman, do not propose specific solutions. They instead request that a cross-generational and racially diverse commission of alumni and cadets review and reconsider “every element of VMI that possesses direct or indirect connection to the Civil War, the Confederacy, or the defense of slavery” and “determine whether they comport or conflict with VMI’s mission and values.”

“Over the past month, Alumni across all generations have engaged with each other about the future of the Institute,” the men wrote. “We recognize that change is coming; and we believe we must act together to shape these changes with and through your leadership.”

VMI spokesman Col. Bill Wyatt said in an email Thursday that VMI’s superintendent, retired Gen. J.H. Binford Peay III, was unavailable for an interview. Wyatt said the institute’s leadership “is aware of all of the petitions being circulated and has heard from many interested parties on both sides of the issue.” Peay “will continue to give the matter attention in the coming weeks and months,” Wyatt wrote.

The four graduates’ letter comes on the heels of two dueling petitions directed toward the institute’s Thomas J. “Stonewall” Jackson statue, one started by recent Black VMI graduates asking the institute to address racism at VMI and remove the statue, the other a counter-petition — which received three times the number of signatures — acting as “a defense of the Stonewall Jackson monument and VMI’s sacred heritage.”

This letter, which will be delivered to Peay and VMI’s governing board of visitors, voices the alumni’s belief that VMI is in a position to be a leader on the issue and should be proactive. “Remaining reactive ... will diminish VMI’s reputation for wisdom and courage,” the letter states.

“Let’s do things on our own terms while we still can before we’re made to do those things that are inevitable,” Rahman said in an interview Thursday.

‘An appropriate method of change’

Purdy said in an interview Wednesday that alumni have discussed addressing certain VMI symbols since the 2017 Unite the Right rally in Charlottesville. With the recent national conversation about racism spurred by George Floyd’s killing and new action by cities, “it seemed more than past the time for VMI to actually do something.”

Purdy and Powell, both 1999 graduates of VMI and longtime friends, decided to pen an op-ed in the Richmond Times-Dispatch calling for the campus Jackson statue to be taken down. They found out Hasseltine and Rahman, 1997 graduates, also had been thinking about how VMI should move forward, Purdy said.

Though the four men had different approaches, they had similar goals and decided to collaborate, Purdy said. Hasseltine is a retired decorated Marine Corps combat veteran who works in cybersecurity; Powell is a freelance journalist; Purdy is a Navy Reserve veteran and lawyer for Google; and Rahman is an engineer.

“Ultimately, we thought, let’s try to work with the administration,” Purdy said. “Let’s demonstrate that there is a core group of alums who are very concerned that the institute is effectively being left behind by the rest of society, and that it’s not going to be an attractive place for a lot of young future leaders to go to school.”

The group is about reassessment, not erasing history, Purdy said. The letter calls for history to be preserved, studied and placed in context based on “an appropriate method of change.”

Purdy believes even those who oppose change may find the idea of a reassessment commission worthwhile. “Because the alternative is that all this stuff gets taken down. And it’s just a matter of time,” Purdy said.

Jackson, a Confederate general who also owned six enslaved people, taught at VMI before the Civil War. Until just a few years ago, first-year cadets — known as “rats” — had to salute his statue, which was erected in 1912 and stands in front of the barracks. Multiple buildings are named for Jackson and other notable VMI alumni and faculty who fought for the Confederacy.

Change — rather, resistance to change — has put VMI front and center on the national stage before.

The school made headlines at the end of the 20th century for spending six years and millions of dollars in a legal fight to remain all-male. The U.S. Supreme Court in 1996 ruled the institute needed to admit women or turn private. The court ruled 7-to-1 that the school could not exclude women while taking state money.

Even then, VMI did not go quietly.

Alumni leaders attempted to raise enough money to buy the college from Virginia and turn private. Three months after the decision, the board of visitors voted 9-8 to admit women. Cadets and alumni lamented that it would be the death of the storied military college.

But the “parade of horribles” brought up in the ‘90s never came to fruition, Purdy said.

It’s that change that has informed Purdy and Rahman’s thinking about the current issue at hand. Women first matriculated in August 1997, two years before Purdy graduated and a semester after Rahman graduated.

“I was one of those people that thought the world would come to an end when the first VMI female cadets walked into there,” Rahman recalled. “That didn’t happen, did it? Everything worked out just fine.”

“If we would just embrace the change and kind of pivot towards the future, I think the place to be a stronger place going forward,” Purdy said.

“This is an opportunity that we as an institution have at this moment in history,” Rahman said. “We should take this chance. ... We should decide our fate. We should do the right thing.”

Rahman was born in Bangladesh and lived in several countries during his childhood, the son of an American-educated professor. Rahman was drawn to attend VMI for its history, and he became head cadet at the college’s museum during his time there. He was used to adapting to new cultures, so he embraced what he saw at VMI without thinking too critically, he said.

But his views have changed as he has grown older, he said.

He has three children, all of whom were born in America. It’s them he thinks about as he asks his alma mater to reassess its symbols.

“I have to think about their futures and what kind of an America I leave behind for my three children,” Rahman said. “So that they don’t have to experience a lot of things that minorities, including myself, have experienced in this country.”

A group of former cadets want the military college's Stonewall Jackson statue to be torn down and for administration to clamp down on racism in the ranks.

VMI to alter traditions tied to its Confederate history, but leave statues in place

“Throughout the years, the primary focus on honoring VMI’s history has been to celebrate principles of honor, integrity, character, courage, service, and selflessness of those associated with the Institute. It is not to in anyway condone racism, much less slavery.”