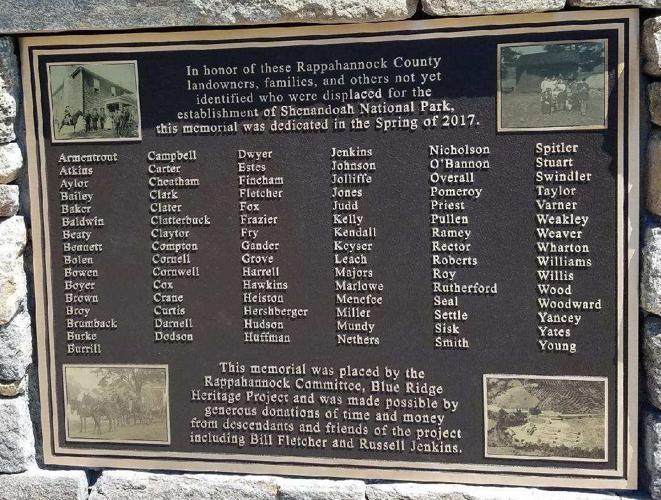 The names of the Rappahannock County residents who were displaced with the building of Shenandoah National Park. The monument will be dedicated Saturday in Sperryville. 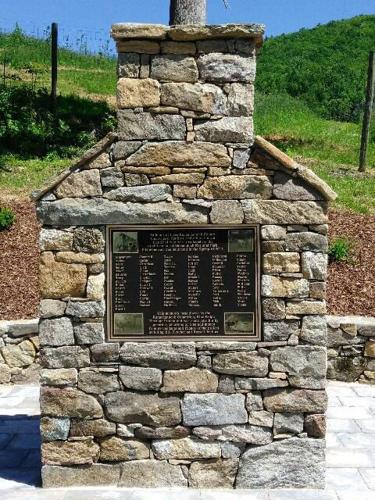 A memorial to Rappahannock County residents forced to move when Shenandoah National Park was built will be dedicated Saturday in Sperryville.

Shenandoah National Park is an escape for many in the D.C. area as well as local residents, attracting more than 1 million visitors each year. But many who utilize the park don’t know a significant part of its history: that hundreds of families were forced to leave their homes, farms, and businesses in the 1920s and 30s to make way for the federal park. Some of those families never fully recovered.

At 10 a.m. this Saturday, May 20, a memorial to the Rappahannock County families displaced by the national park will be dedicated at Thornton River Orchard and Market, 11587 Lee Highway in Sperryville.

The Blue Ridge Heritage Project was created to build memorials in each of the eight counties where folks were displaced, including Albemarle, Augusta, Greene, Madison, Page, Rockingham and Warren. The project also educates visitors about the lives and culture of the people who lived in the mountains.

The Rappahannock Committee has worked for two years ago with descendants and local citizens to construct the latest memorial, which sits just east of the park entrance on U.S. 211 in Sperryville.

“The location of this memorial is perfect because park visitors will see it before they enter the park and can stop to learn about the park’s history before or after they visit the park,” said Missy Sutton, chair of the Rappahannock Committee.

She is the great-great granddaughter of William Jackson Rutherford whose 300 acres were condemned when the park was created.

“There is so much history in the area around the memorial,” Sutton said. “There are cemeteries and old home sites. There is a log cabin just a short distance from the memorial that at one time served as the Pullen post office, named after one of the families that once heavily populated the area. Just across the highway is the Beech Spring Regular Baptist Church; it’s where residents attended church and were baptized and married. There are so many stories to be shared about these people and this area.”

The shape of the memorial, a stone chimney, is significant because after residents left, their homes were burned down to prevent families from returning and the stone chimneys were all that remained. Hikers in the park today often stumble upon chimneys or other remnants of home sites including stone walls, springs, flowers, and apple trees but have no idea how these things came to be there.

Propaganda shared at the time led outsiders to believe that these mountain people were extremely poor, uneducated, cut off from the rest of the world, and in general that they would be better off by being forced to move. Nothing could have been farther from the truth, but the propaganda was necessary to garner public support for the park’s creation.

While it’s true that some of the families didn’t have a lot of money, they were self-sustaining and knew nothing of the Great Depression because they grew, raised, or made most of what they needed to survive. Schools and churches were abundant, and while some houses were very simple in terms of size and construction type, others were more luxurious and had electricity.

The adults who were forced to move back then have all passed, but some of the children, now in their 80s and 90s, are still alive and remember the good times they had before their families were forced to move but also the pain, heartbreak, resentment, and financial hardship they experienced.

The names of the Rappahannock County residents who were displaced with the building of Shenandoah National Park. The monument will be dedicated Saturday in Sperryville.

A memorial to Rappahannock County residents forced to move when Shenandoah National Park was built will be dedicated Saturday in Sperryville.