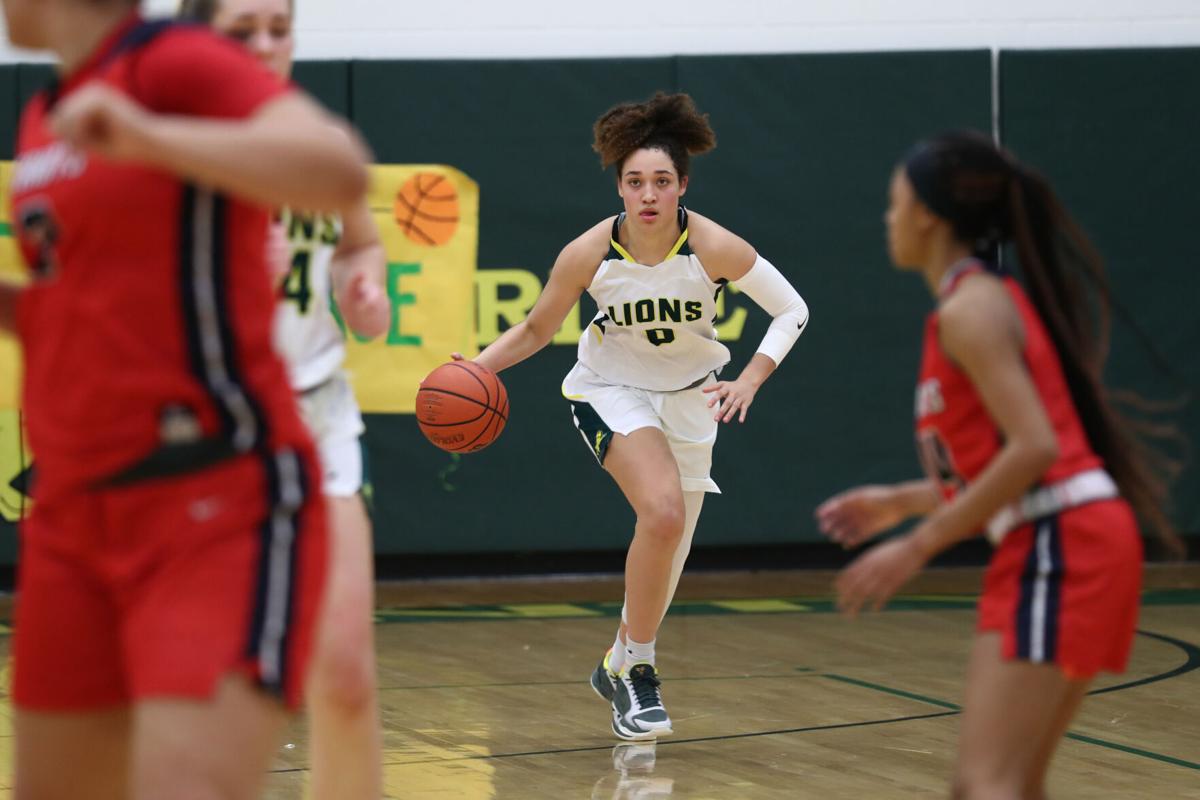 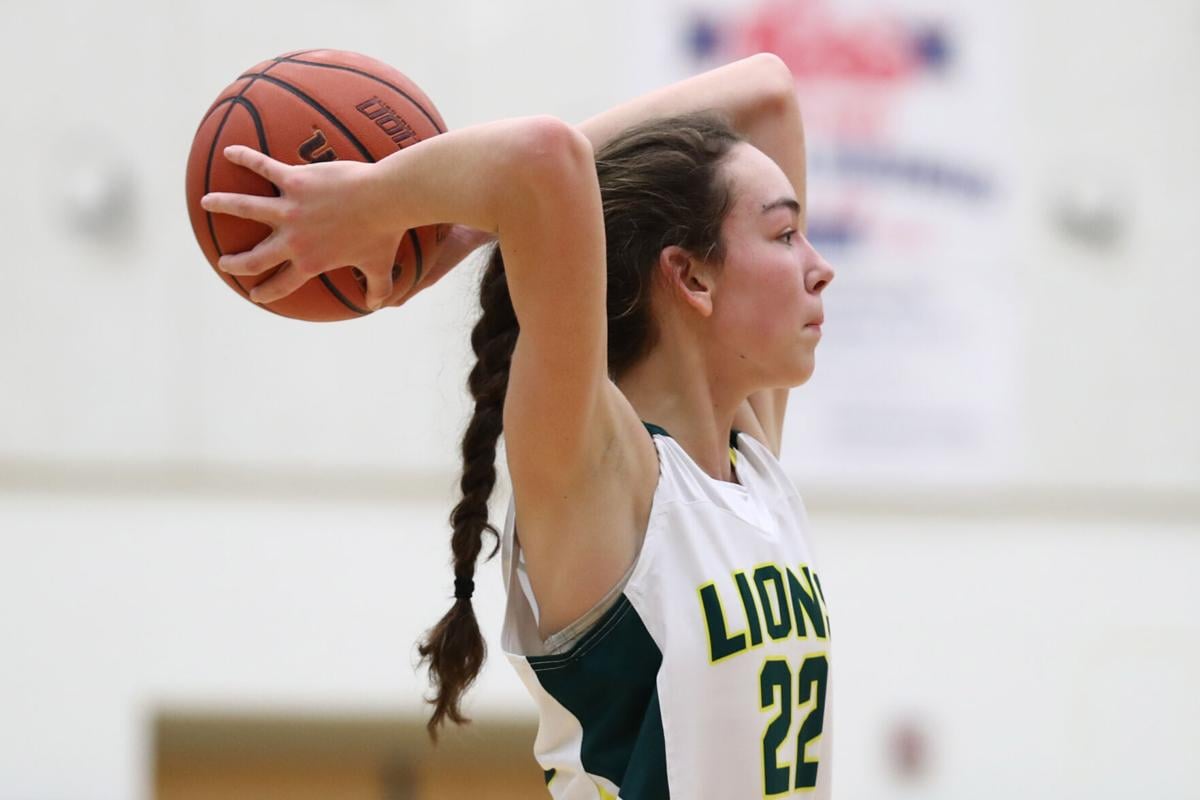 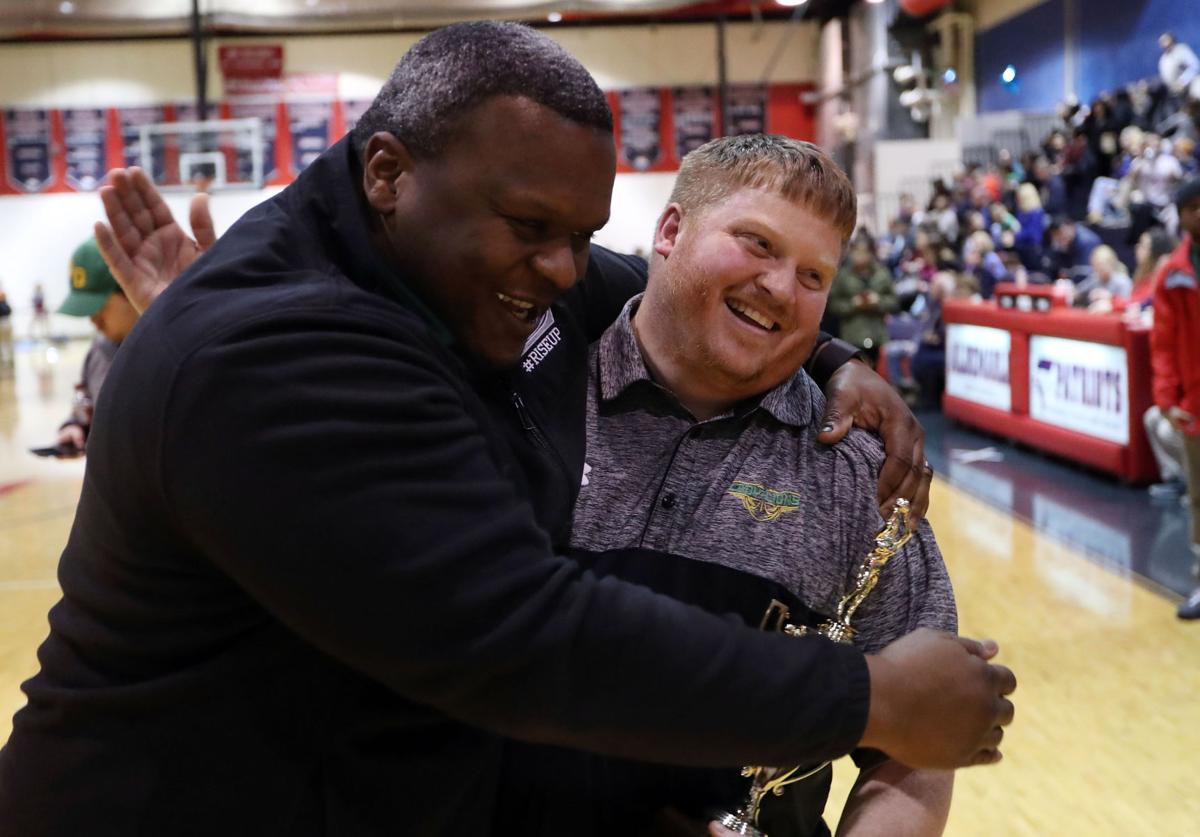 Louisa County’s head coach Nick Schreck, right, smiles as he receives a hug from Louisa athletic director George Stanley after a 63-49 win over Western for the Jefferson District Championship.

The celebration that ensued included plenty of laughs, tears and selfies in recognition of a season-long mission accomplished.

This winter, Coach Nick Shreck and his team embark on a new journey as they set out to become just the second school in VHSL Class 4 history to repeat as state champions.

“Last year was definitely magical,” Schreck said. “Everyone involved can always say they were state champs. We accomplished something that nobody can ever take away.”

The Lions return eight players from last year’s state championship team. That familiarity with not only the system, but the experience from playing in high-pressure games and situations could be a boost for the Lions this season. In addition, Schreck said that he had the most girls try out for the junior varsity and varsity teams this year than any other time during his tenure as Louisa coach.

“This year’s team has a lot of potential,” Schreck said. “We have a good group back from last year and we will need some players to step up to fill host roles from the six seniors we lost if we want to make another run.”

Olivia McGhee, the 2020-21 Central Virginia Girls Basketball Player of the Year, is back for another season after she led the Jefferson District in scoring for the second straight season at 22.8 points per game to go along with 11.5 rebounds , 3.5 assists and 3.2 steals a night.

Another returner from last year’s team is junior guard Sylvie Jackson, who averaged a career-high 19.7 points, 6.5 rebounds, 3.9 steals and 3.5 assists in her first season with the program.

“Last year’s experience was definitely different due to COVID, but we all made sacrifices to keep us successful,” Jackson said. “Winning the championship showed how much work we put in at practice and the chemistry we all had, on and off the court.”

Another key to last year’s success was the Lions’ ability to gel so quickly. Jackson said the chemistry within the team was nearly instantaneous.

“I realized the first week of practice last year that we had all the pieces necessary to win a state championship,” she said. “Coach Schreck made it clear that winning the championship was our main goal the whole season, so that’s what we all worked for.”

From the start of the season, Schreck and his team established lofty goals.

“Playing our best basketball at the end of the season and giving ourselves a chance to make a deep playoff run,” he said of the team’s goals. “We had confidence that we could compete and play with anybody in the state. Once we got rolling and started winning, even with some of our key players being out or hurt and other players stepping up is when I really felt we could make a run.”

Confidence started to grow during the regular season as the Lions captured the Jefferson District title. They followed that up with a victory over perennial powerhouse Monacan in the Region 4B championship game. They Louisa capped a perfect 15-0 season with a road victory over Pulaski County to raise the trophy.

As with most teams last season, the Lions’ challenges extended beyond the court due to the COVID-19 pandemic.

“Being able to compete and play to get back to some sense of normality was a blessing,” Schreck said. “We were very grateful for our school administration for allowing that to happen.”

The support also extended into the Louisa community.

“I think it was great for our community to have sports and to be able to follow along, even if they couldn’t attend our games,” Schreck said. “We felt the support from the community as we made our run and Louisa is a great place where the community really gets behind its athletic teams. I think our run gave the community something to take their minds off the pandemic.”

Jackson said the state championship helped set the tone for the offseason.

“Winning the title motivated me to work harder over the summer during AAU, then in the offseason on my own,” she said. “Working harder than last year is one of the ways we’ll be able to run it back this year.”

Schreck has been impressed with the hunger that the players have shown heading into winter practice.

“The offseason has been great,” he said. “We have had a good turnout at our workouts. We have a lot of new faces in the program, at both levels, and I think the excitement and interest in the program is at an all-time high.”

With expectations high, both internally and externally, the Louisa County coach made sure to challenge his team with some realistic goals.

“The message as we start the season and during offseason workouts was one of not being satisfied,” Schreck said. “We have to put even more work [in] to match the expectations and I hope they understand that the target is even bigger on us this year.”

Schreck said the biggest obstacle is not taking last year’s success for granted.

“We were successful last year because we did everything right from the start of the season,” he said. “Our attitude, focus and mentality was on point at every game and every practice and the results showed for themselves.”

As the season approaches, Schreck has been impressed with what he’s seen from this year’s team. He has seen a lot of potential from this group, but realizes they must spend the regular season developing depth and having players fill expanded roles for the six seniors lost to graduation.

“I like where we are right now,” he said. “We have a group that is working very hard and they will have to quickly pick up on the systems we run, both offensively and defensively but they are doing great and picking it up quickly. Our goal is to always play our best basketball toward the end of the season. I think this team has the potential to make another run, but we will have to develop some depth if we want to play the style we want.”

Louisa County opens its regular season Friday, Dec. 3 at home against Spotsylvania. Schreck said his team is eager to get started.

“As always, when you win a championship and you have a lot of players back, expectations are at an all-time high for us. I think this group has the potential to have another special year,” he said. “We have a lot of good pieces and we just need to come together and find the added depth needed to be a championship team and make a run. This is going to be a fun season and we are looking forward to it.”

Jackson said the Lions are up for the challenge.

“Our biggest goal is to make a state championship run again,” she said. “We know what it takes to succeed and win. We just have to have that same amount of effort, relentlessness and determination as we had last season.”

Louisa County’s head coach Nick Schreck, right, smiles as he receives a hug from Louisa athletic director George Stanley after a 63-49 win over Western for the Jefferson District Championship.