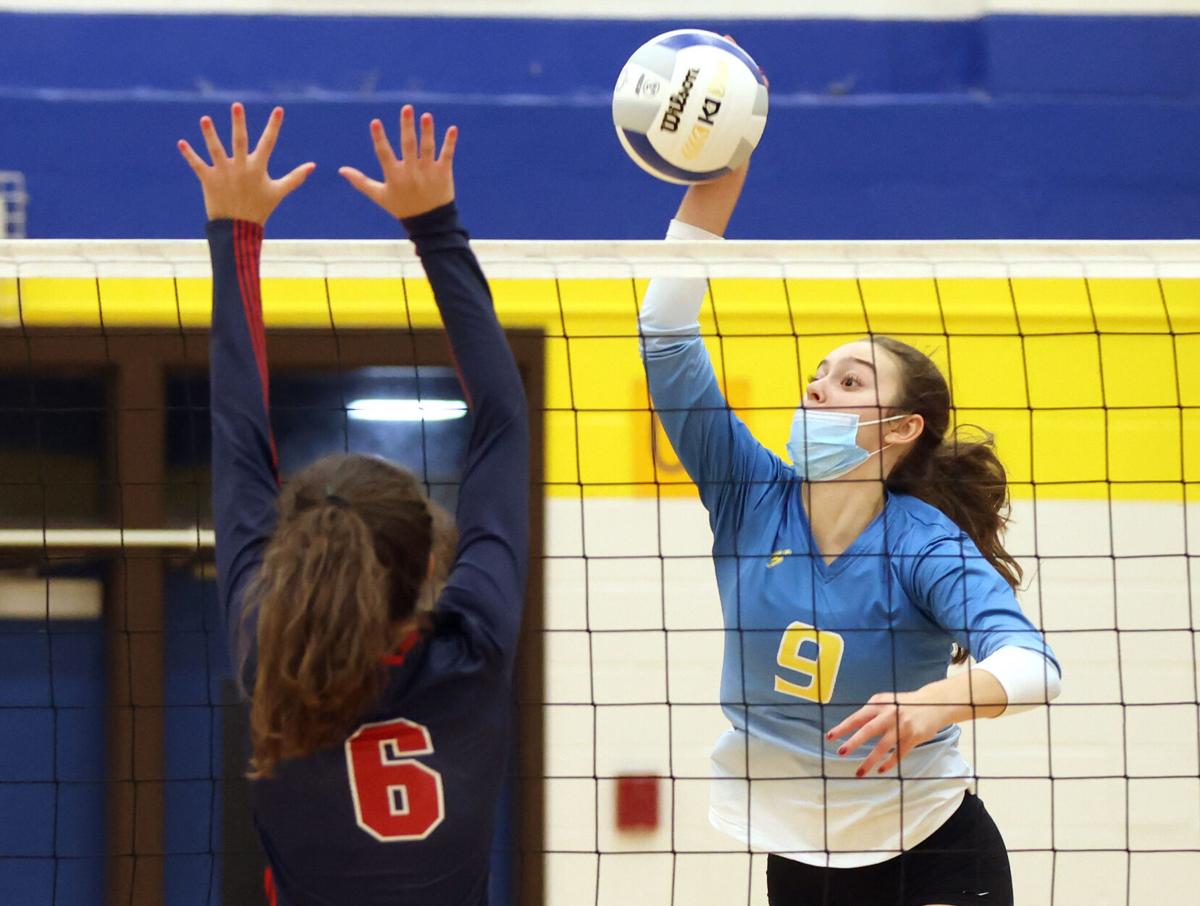 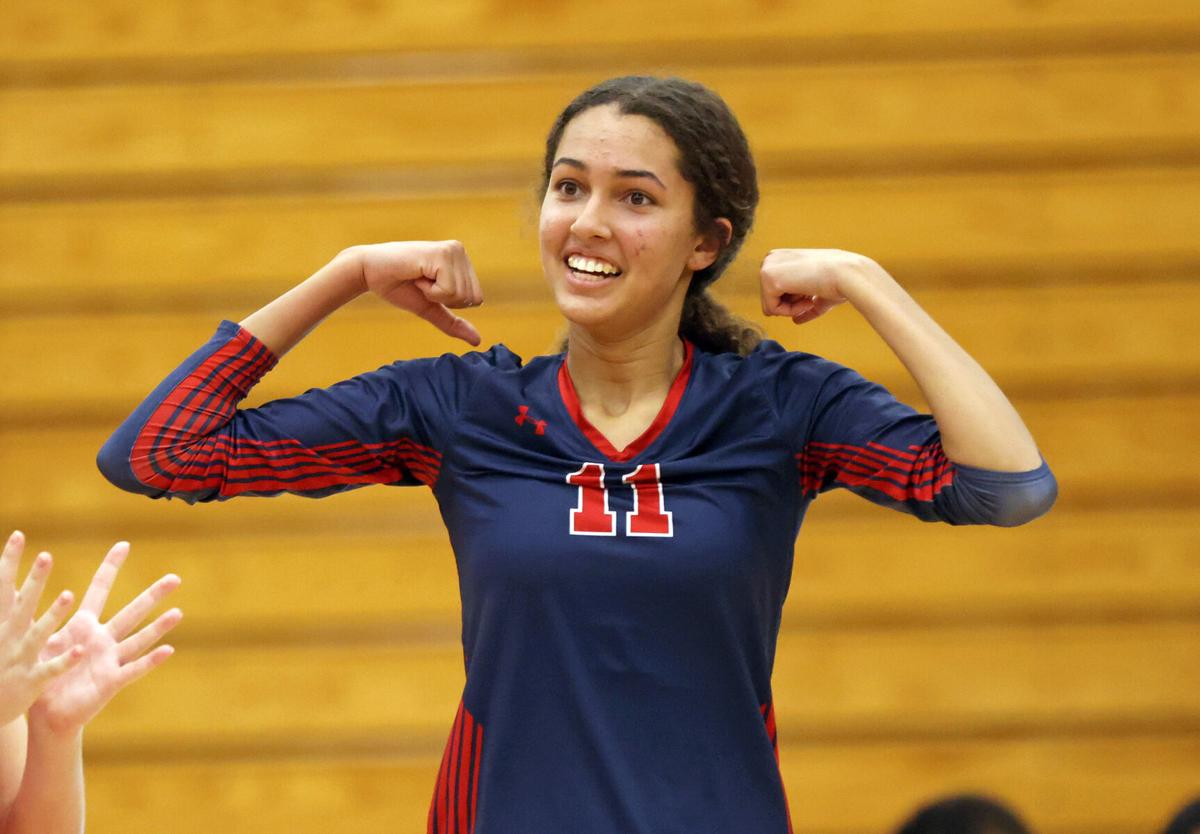 It’s been nine years since the Western Albemarle volleyball team has won a Jefferson District title.

Brooke Chavez posted a team-high 21 kills and middle blocker Emma Shifflett contributed 13 kills and a pair of blocks as Western Albemarle improved to 11-0 on the season.

“We got down a couple of times, but we were able to get together and bring [the energy] back up,” Shifflett said. “I think that’s what it really came down to.”

Albemarle had other ideas early on, thanks to the spirited play of Maya Winterhoff. The Patriots’ senior outside hitter was determined from the opening point of the match. She had a kill on the first point and racked up three kills and five service points to give her team an 12-4 lead.

The good work at the net was contagious for the Patriots. Weining Ding had two kills and Maddie Ott added a kill and a block to give Albemarle the first set, 25-11.

Winterhoff continued to thrive at the net at the start of the second set, posting four kills, including a soft shot over a block to become the Albemarle volleyball program’s all-time leader in kills. She passed the mark of 923 set by Jessica Evers in 1999. Evers went on to play volleyball at James Madison University.

“I did know going into that point, I knew that was my 10th kill for the game, so it was such a good feeling,” Winterhoff said. “I was like, ‘Wow, I really did that.’ That record’s been there forever and that was a great player that went on to play D-1 volleyball. I’m so excited to have my name there.”

After a brief celebration of Winterhoff’s accomplishment, Western Albemarle found its hitting rhythm. Shifflett had five kills and Chavez added four more as the Warriors took a 24-19 lead. Sofia Beard capped the second set for the Warriors with an ace to even the match at 1-1.

The third set was another back-and-forth tilt before Grace Boitnott capped a five-point run with an ace to give Western Albemarle an 12-7 lead.

Bella Tesoriere and Shifflett each had a big solo blocks on Winterhoff, and Chavez split two defenders for a big kill to secure a 25-16 win for WAHS and a 2-1 lead in match.

Western trimmed the lead to 20-17 on a dink from Sequoyah Sorensen, but Albemarle answered with two kills from Ott and Winterhoff slammed home the set point to win 25-20 and force a fifth and deciding set.

Chavez came out swinging with four kills in the final set as Western jumped out to a 7-3 lead.

Albemarle countered as Ott and Winterhoff combined for five kills to trim the lead to 9-8.

That’s when Shifflett left her stamp on the game.

With two blockers in front of her, the Western Albemarle middle hitter calmly sliced a shot to the right for a kill to give her team a 12-9 lead.

“Really, it was the setter and where they put the ball and I just got to it and got the shot off,” Shifflett said.

Chavez and Sofia Beard added two more kills to earn a match point, and Albemarle couldn’t get the ball back in play on the ensuing point as Western Albemarle celebrated the hard-earned win.

Beard added 14 service points and eight kills in the win for Western Albemarle.

For Albemarle, Winterhoff finished with 30 kills, while Ding and Ott added seven kills apiece in the loss.

“We were so proud to take it to five this time,” Winterhoff said. “So just to have improved since last game [against Western Albemarle] is such a good feeling and I’m so proud for us getting that done. We almost came back. We started out strong, but then they came back, and we knew they would, that’s what they do, but I’m proud of us for taking that fourth set and taking it to the fifth.”

With two weeks remaining in the regular season, Western Albemarle now holds a two-game lead in the district standings.

“This is like a really big deal,” Shifflett said. “We’re really excited.”

NFL Week 6 Market: Will weather be a factor?

Who will win NFL Offensive Rookie of the Year?

Who will win NFL Offensive Rookie of the Year?

Kyrie Irving says he is not retiring

Kyrie Irving says he is not retiring