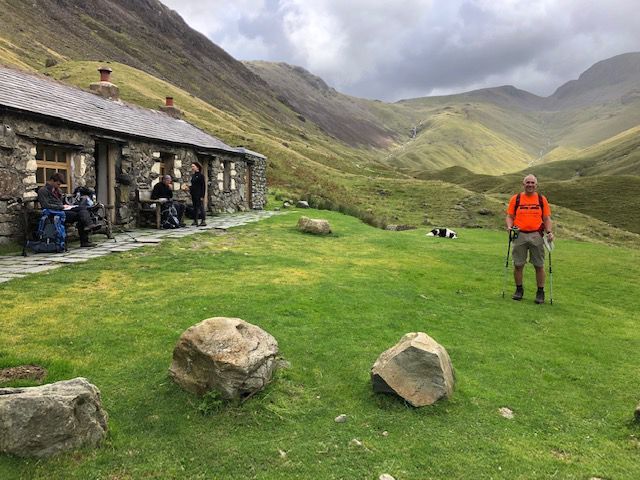 On the second day of his walk across England, Mark Lorenzoni had to overcome his fear of heights to hike through the mountains between Ennerdale Bridge and Rosthwaite. 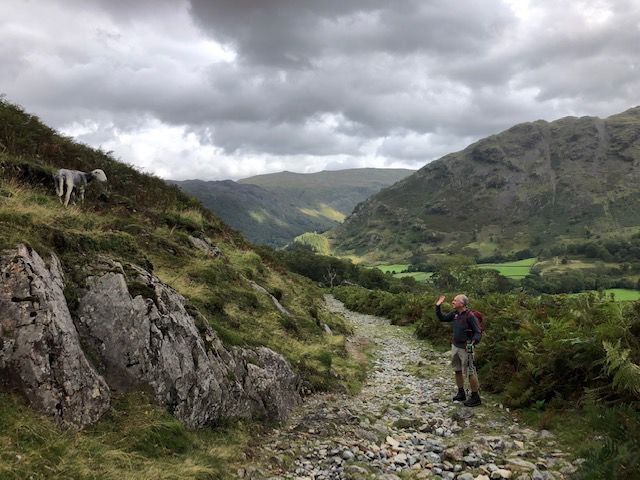 Mark Lorenzoni looks at a mountain goat during his walk across England.

After a good night’s sleep and a hearty English breakfast, we headed out of the tiny village of Ennerdale Bridge, in 52 degree weather, to the start of the legendary Lake District. Within two miles, we could see the stunning mountains of the most eastern section of this magnificent national park, looming up ahead of us. We excitedly picked up the pace as we drew closer to the head of Ennerdale Water, the first of many gorgeous mountain lakes to come. As if on cue, just as we arrived at the western shore of the lake, the early morning sun pulled itself up over the towering mountains and cast a shimmering reflection along the length of the beautiful body of water. It was simply stunning!

After a few miles of walking on a narrow path along the very edge of the lake’s northern banks, and wading through the tallest and thickest mass of amber colored waist high ferns one can imagine, we came upon an old logging road. The massive lake had now narrowed to a rushing mountain stream and our early morning flat terrain was now steadily working its way uphill to the base of the mountains, along the soft surfaced forested road and the river below it. In many ways this section reminded us of the hikes we had done in the Tetons a few summers earlier: wide, tree-lined rocky streams with the majestic mountains, almost as if computer generated, constantly as our backdrop.

With only a few miles to go to the Black Sail Hut, our halfway point of the day, a young hiker came cruising up behind us. Harry, a second-year student at Cambridge, was camping his way across the C2C before going back to school. We thoroughly enjoyed spending time walking and talking with this energetic young man. Despite his lovely British accent, he reminded us of our wonderful UVa students who work with us back in Charlottesville. So full of energy and not a fear in the world, although he did confide in us that his main goal each day was to get to a place where he had cell reception, so he could call his “Mum,” who was worried about her son hiking all alone all the way across England.

As we approached the legendary Black Sail Hut, known as England’s “most remote” Youth Hostel, we found ourselves facing a tall bowl of the most magnificent grass-covered mountains and, despite the incredible height of these towering mountains, their color remained a rich green all the way to the very top.

For as far as one could see, in the bowl of this mighty wall of mountains, there were towering waterfalls cascading from way far above, to the floors of this lush green valley oasis. Water was everywhere in this valley of green carpet! This area of the Lake District annually records the highest rainfall amounts in all of England and the beautiful results of all that rain were now, stunningly, before our eyes.

And as I surveyed this Shangri-La like scene I suddenly realized that I could no longer see our path eastward. How in the heck were we going to get through this half circle of mountainous terrain? And then Cynthia pointed to the top of one of the mountains looming up in front of us. I strained my eyes to see what she was gesturing at and there, almost 2,500 feet above us, way, way up were a group of hikers climbing along a narrow path of stone steps, alongside a cascading waterfall. And they weren’t meandering their way along a gentle switchback trail, they were literally walking straight up the mountain!

Gulp! I froze in my acrophobic tracks.

See, I can talk to an audience of 1,000 people without a single ounce of trepidation but the mere sight of a high path makes me sweat and shake with fear. Simply put, I’m terrified of heights. No Eiffel Tower stairs with my college buddies, no looking over the edge of the Empire State Building with our Sunday School students and no climbing up the stairs of the Currituck Beach Lighthouse with my own kids. It’s been a lifelong but futile battle to overcome this irrational phobia.

Having asked, as we planned our walk, Linda and even our friends at the British sherpa company, about any sections along the way that would give pause for a scaredy-cat like me and all answers were the same: “Not a thing to worry about!” What a fellow acrophobiac pointed out to me at the pub later that evening totally made sense: “That’s the honest answer you’ll always get from someone who isn’t actually afraid of heights. The problem is that they simply can’t relate. The key is to ask someone who is afraid!”

I debated about turning around and walking the nine miles back to Ennerdale where there was cell service to call a taxi to our next B&B but quickly realized how silly that was. I knew there was only one way along our journey and that was to go 2,000 feet straight up. Ugh! So, with Cynthia’s constant encouragement, as she walked behind me every single tentative step of the way up the steep ascent, that’s just what I did.

With my walking sticks planted firmly into each ancient stone step and a rushing waterfall cascading far down below us, I slowly made it to the top and in doing so, had conquered the steepest climb of my life. I wasn’t quite ready to tear up my acrophobia club card yet but, thanks to Cynthia’s upbeat coaching, I now had the confidence to keep going up and over more mountains. This wasn’t in our wedding vows but, after 40 years of patient marriage, Cynthia had found yet another benevolent way to say “I do!”

The magnificent views from the mountaintop made every scary step worth it. Outstretched before us were endless miles of stunning mountains laced together by five large, gorgeous lakes. It was now so very apparent to us why this sprawling National Park had been dubbed the “Lake District”. Standing there all alone, with not a soul in sight and not a single bar on our cell phones, looking out at this spectacular and unspoiled sight, made Cynthia and I feel like we had stepped back in time to an England from a century long ago. We stood there entranced by this peaceful moment.

We then steadily worked our way down the other side of this magnificent mountain range, using our walking sticks for stabilizers, as we navigated the steep descent along the rocky path. We passed countless sheep along the way, many of them grazing in the middle of our path, and before we knew it, the uneven and unstable rocky footing had turned into a smooth, dirt-packed path, running along lichen-covered stone walls and bubbling streams coming down off the mountains. As the path leveled, we spotted, farther down along the lush green valley, our first view of civilization since leaving Ennerdale eight hours earlier, as we could see the slate roofed, white washed stone cottages of the quaint village of Rosthwaite in the distance.

Within minutes, our path came out onto a narrow lane that wound its way along ancient stone walls, that bordered fields filled with cows and sheep, into the tiny farming village and our next resting place, The Royal Oak, an 18th century inn where William Wordsworth once slept. The low beamed ceiling of the old inn’s pub was a welcome sight after our 16-mile journey and, as we raised our pints of delicious beer, we toasted to not only an amazing day but also to another set of memories in our wonderful 40 year marriage journey together. We couldn’t wait for what lay ahead...

TIP OF THE WEEK: To get to your 15 miles per week I’d suggest five days of three miles or, if you have less time each day, then a daily walk of two miles. Always start your walk by going deliberately slower. This is the safest and most efficient way to “stretch” because it allows your cold fibers (Achilles, calves, plantar fascia and hamstrings) to naturally and gently warm up and reduce the risk of injury. After about 8-10 minutes, you can begin to pick up your pace to safely allow your heart rate to get to a beneficial level. And save the “static” (pulling and pushing) stretching for after you finish your walk.

HIDDEN LOCAL GEM of THE WEEK: One of Albemarle County’s most beautiful public parks also is one of the most remote and least known. The uphill climb into the majestic mountains of Patricia Ann Byrom Park is a wonderful simulation for the terrain we covered during the second day of our C2C walk. Located about eight miles northwest of the tiny village of Whitehall, this beautiful park has countless miles of narrow earthen paths that climb high into the mountains as they meander along cascading streams and, ultimately, as you get closer to the top, offer you stunning views eastward. Go to the Albemarle County Parks website for more detailed information on this beautiful, underutilized local walking resource.

Mark Lorenzoni and his wife Cynthia have been running since the early 1970s but they also very much enjoy walking together, as they start many of their mornings with a brisk walk around the western part of beautiful Albemarle County.

Our local hero, Mark Lorenzoni, has week after week invited us to follow his fantastic travel log.

Walking across England with Mark and Cynthia Lorenzoni

On the second day of his walk across England, Mark Lorenzoni had to overcome his fear of heights to hike through the mountains between Ennerdale Bridge and Rosthwaite.

Mark Lorenzoni looks at a mountain goat during his walk across England.