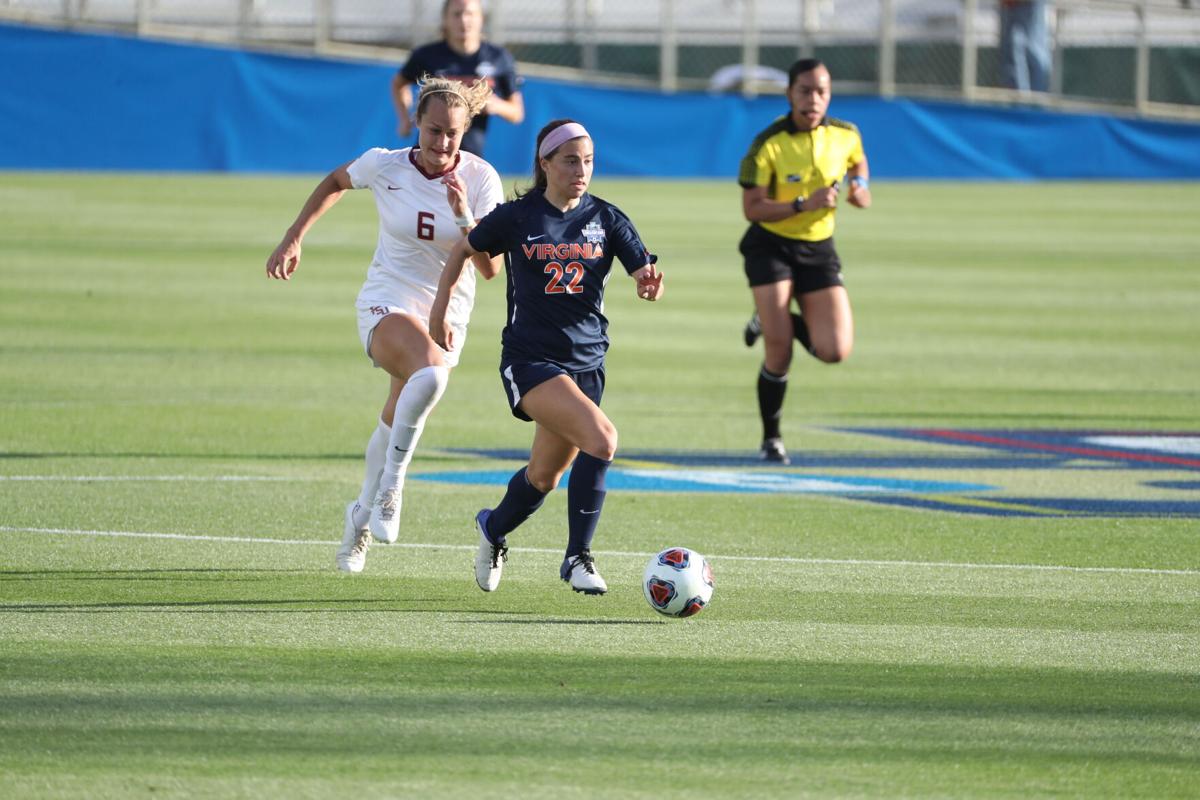 Virginia’s Lia Godfrey dribbles the ball against Florida State during the College Cup on Thursday in Cary, N.C. 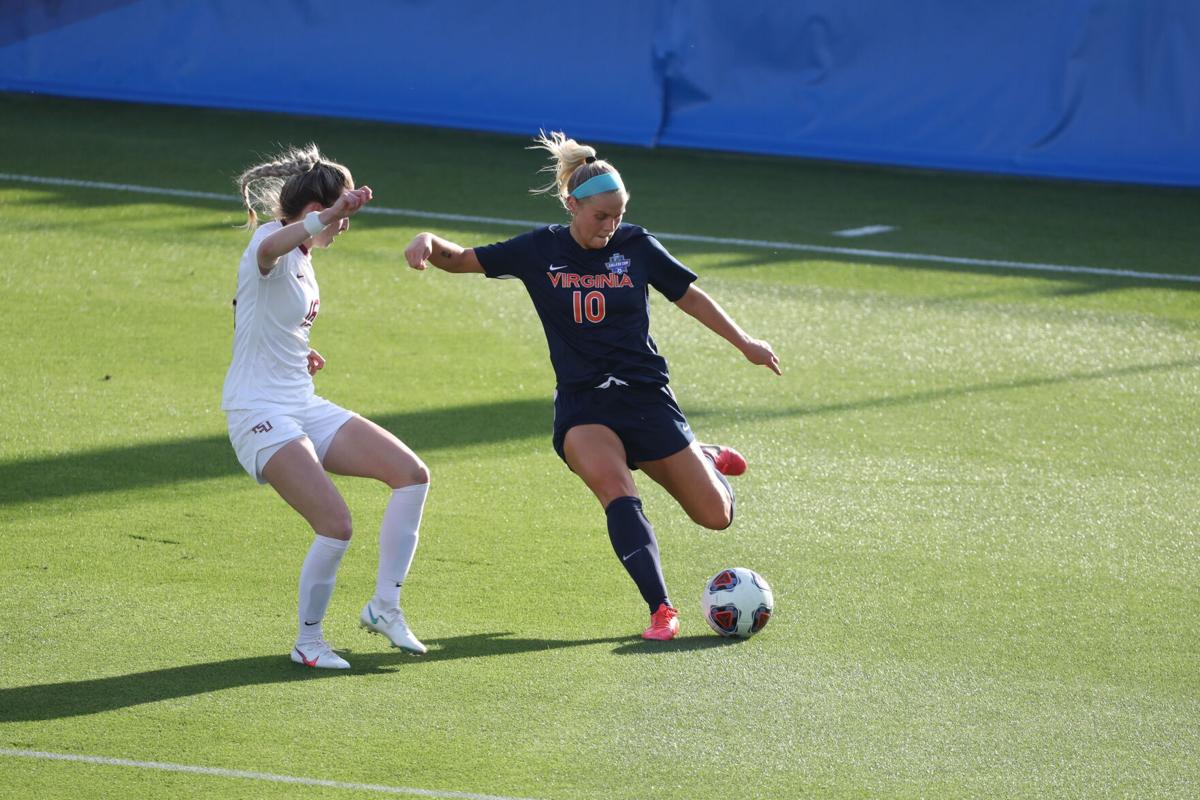 Virginia’s Taryn Torres, right, looks to pass the ball against Florida State in the College Cup on Thursday in Cary, N.C.

Women’s soccer was the first University of Virginia athletic program to return to game action in September after months away from competition due to COVID-19.

Eight months after the Cavaliers defeated Virginia Tech on Sept. 12, they saw their phenomenal season end in heartbreaking fashion.

The unseeded Cavaliers were outlasted by top-seeded Florida State in the NCAA Tournament semifinals, falling 3-0 in penalty kicks after playing to a 0-0 tie in regulation and two overtime periods.

“It obviously hurts, so bad, like I can’t even describe,” senior Taryn Torres said.

Unfortunately for the Wahoos, a tremendous effort against the nation’s top team was soured by a subpar showing in the penalty kick shootout.

Diana Ordonez, UVa’s leading goal scorer, took the team’s second shot. She took a big stride toward the ball and tried to beat Roque left, but the goalkeeper quickly maneuvered over to stop the shot. FSU’s Emily Madril took the second shot and scored in the left side of the net, giving the Seminoles a commanding 2-0 edge.

Desperate now, UVa turned to Torres. She went right, but Roque was once again up to the task. She saved the ball, delivering another blow to UVa’s hopes of advancing.

Gabby Carle ended the match, slamming the ball into the back of left side of the net and sending the Seminoles to the national title game.

“If I had the answer to PKs, I think I’d make a lot of money at this point in time,” UVa head coach Steve Swanson said.

As Virginia looks back at the loss, missed chances in the first half were the team’s undoing.

“It was really unfortunate,” Torres said. “We came into halftime knowing we should’ve had a goal or maybe a few. We were definitely dominating. We felt in control. As good as Florida State is, I felt like we were the better team in the first half.”

Virginia controlled the first half, which was a welcomed change from the first meeting between the teams this season. In October, Florida State led 2-0 after 15 minutes and 3-1 at halftime. Thursday, the Cavaliers held FSU to a season-low one shot in the opening 45 minutes.

Unfortunately for the Wahoos, they couldn’t turn a shots advantage into a lead. Virginia took six shots in the first half, and it nearly converted on a couple.

Junior Rebecca Jarrett’s shot in the 13th minute was the team’s best first-half look. The speedy forward, who proved to be a mismatch for the Seminoles, took a shot with her right foot from the left side of the box with a defender on her hip. The look beat Roque, but it connected with the crossbar.

The ball bounced down, but didn’t cross the goal line and was cleared away.

UVa generated other chances in the first half, although nobody came up with a goal. The Cavaliers were unable to capitalize on a quality half.

“I thought that Virginia gave us all that we could handle, that we were fortunate to come into halftime at 0-0 and to regroup,” FSU head coach Mark Krikorian said.

In the second half, Florida State upped the pressure. They controlled possession, limiting UVa to mostly counterattacks.

Florida State recorded six second-half shots to Virginia’s two, but much like the first half, the dominant team failed to capitalize on its possession.

A dominant penalty kick showing was enough to put the Seminoles in the championship match and end Virginia’s season.

Up next: Florida State advances to the national championship match. Virginia's season is over.

Virginia’s Lia Godfrey dribbles the ball against Florida State during the College Cup on Thursday in Cary, N.C.

Virginia’s Taryn Torres, right, looks to pass the ball against Florida State in the College Cup on Thursday in Cary, N.C.