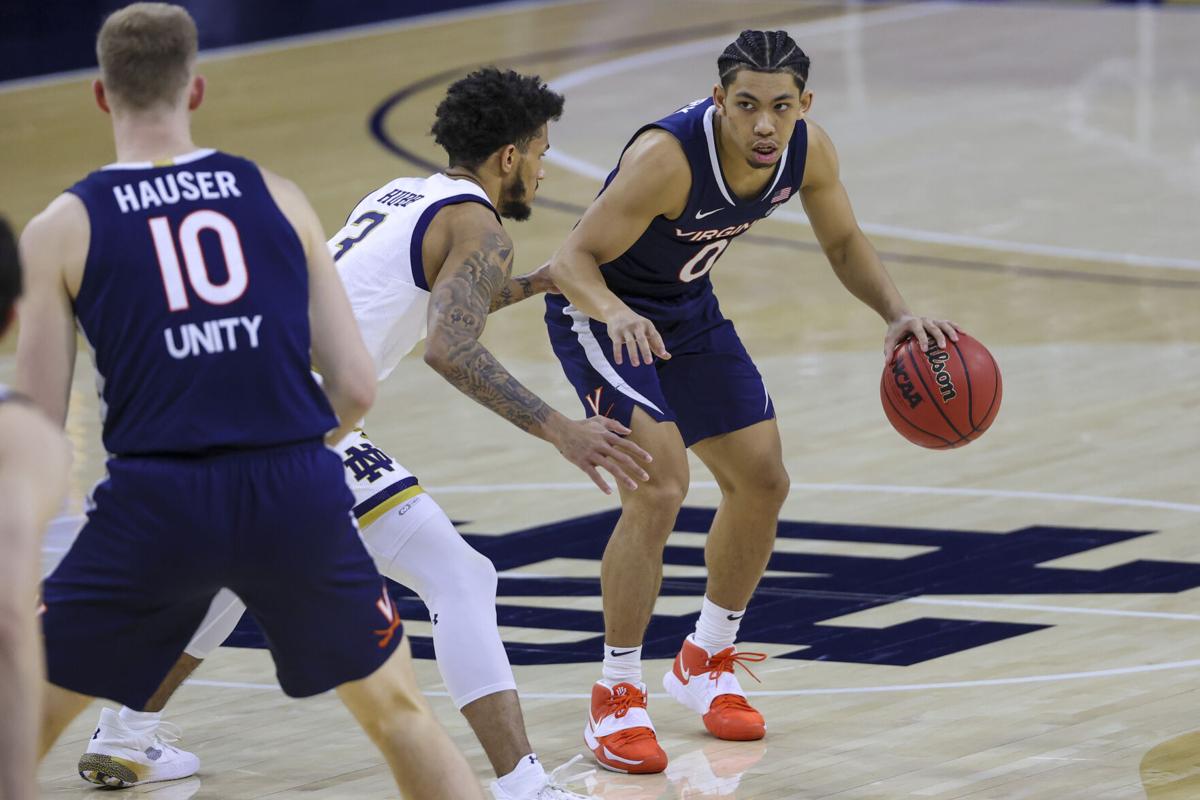 Virginia guard Kihei Clark, right, had 19 points and five assists in the Cavaliers’ win over Notre Dame on Wednesday. 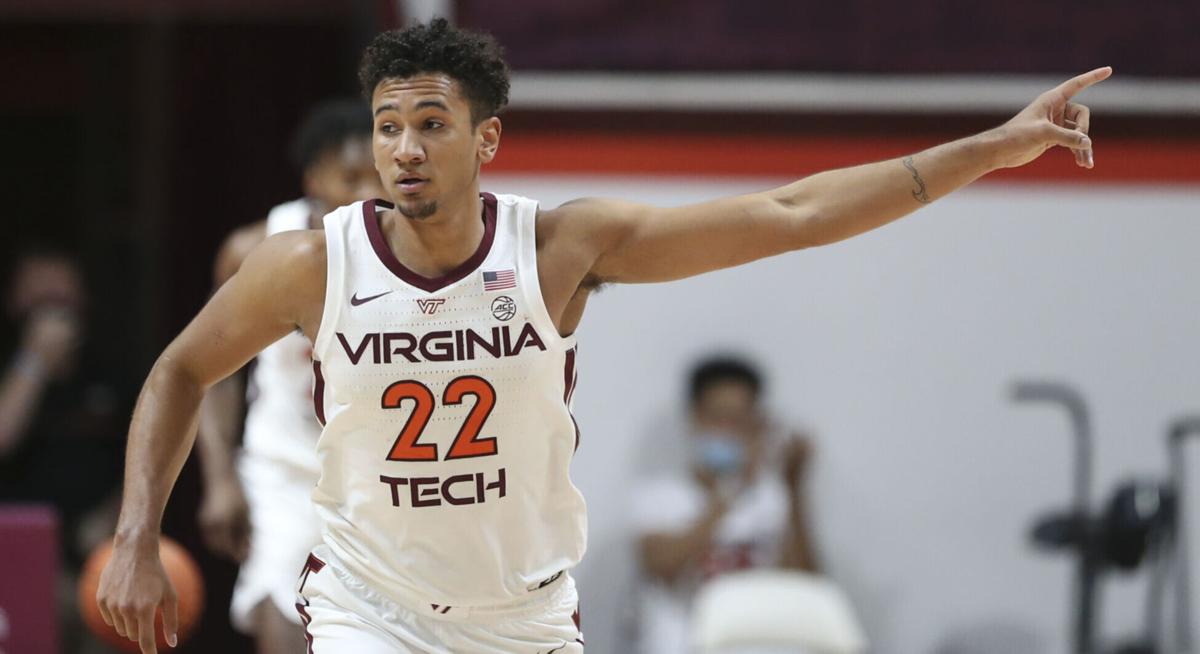 Virginia Tech’s Keve Aluma points during the second half of the Hokies’ win over Miami on Tuesday in Blacksburg.

When Virginia and Virginia Tech last met, Kihei Clark buried a game-winning 3-pointer in the final seconds to silence the majority of the 9,275 fans in Cassell Coliseum.

Clark’s shot sparked a cheer behind the Cavaliers’ bench and gave Virginia a 56-53 victory as well as a season sweep over the Hokies.

When the two teams square off Saturday at 2 p.m. in John Paul Jones Arena, the in-game atmosphere will be subdued.

“They’re good,” Virginia head coach Tony Bennett said Wednesday after the Cavaliers’ win over Notre Dame. “I haven’t watched them a ton. I’ll get to that. Obviously our staff has, but anybody who can beat Villanova [is good]. They’re hard to guard, they work hard, they’re well-coached. Certainly respect the job they’re doing.”

Mike Young’s team checks in at No. 24 in the AP poll, one spot behind Bennett’s 23rd-ranked Cavaliers.

They’ve won eight times, losing only once to Penn State. Virginia Tech beat Villanova on a neutral floor earlier this season, and they also took down quality ACC foes in Clemson and Miami.

Virginia Tech plays with good energy on both ends, ranking 37th in adjusted offensive efficiency and 46th in defensive efficiency, according to KenPom. The Hokies shoot the ball well and play hard on the defensive side of the ball.

They also bring solid energy on the bench. In fact, Young said an official actually — to Young’s surprise — told the bench to calm down during Virginia Tech’s win over Miami.

“I always enjoy when our bench is engaged,” Virginia Tech’s Keve Aluma said. “That really is the fuel to our fire when we aren’t allowed to have a crowd. Everyone on the court thrives off of that energy, I liked it.”

UVa (5-2, 1-0 ACC) placed an emphasis on bench energy in its 66-57 road victory over Notre Dame. The Cavaliers delivered a victory and an engaged sideline after a poor showing against Gonzaga.

Both teams want their benches to bring energy and excitement to a game played in front of a mostly empty JPJ Arena on Saturday afternoon.

The sideline wasn’t the only reason for Virginia’s win over the Fighting Irish, though. UVa limited Notre Dame to 25% shooting from beyond the arc, and the Cavaliers committed a season-low five turnovers to go with 14 assists.

After losing to Gonzaga and struggling with turnovers, the Wahoos took care of the ball and played better defense against Notre Dame. The performance wasn’t perfect, but it was certainly improved.

“We definitely made a step in the right direction,” Virginia forward Sam Hauser said of the defense. “Gonzaga really exposed us on that end of the floor.”

The talented point guard scored 18 points in last season’s first win over Virginia Tech before scoring 10 in the win in Blacksburg, and he finished the win over Notre Dame with 19 points, five assists and no turnovers. The junior point guard played his best game of the season against the Fighting Irish.

UVa needs Clark at his best to take down Virginia Tech, which is the best team to appear on the Cavaliers’ schedule outside of Gonzaga. The Hokies pose a tough test for an inconsistent Virginia team.

“We just always got to be focused,” Clark said. “It’s the ACC; anybody in the ACC is capable.”

The road stays challenging the rest of the season. Gone are matchups with struggling mid-majors.

It’s conference play the rest of the way.

“We’re in ACC play now and everything steps up,” Bennett said.

Kihei Clark and Reece Beekman were on the floor together for almost the entirety of Saturday's 61-49 victory over Boston College, yet they committed just one turnover.

Former St. Anne's-Belfield star Aaron Stinnie will get one of the biggest opportunities of his NFL career this upcoming weekend.

A way-too-early look at key players on the UVa football team’s 2021 roster.

After moving to 3-0 in the ACC over the weekend with a win at Boston College, the Virginia men's basketball team returns home for a midweek game against Notre Dame.

Jay Huff scored Virginia’s first two points of the game and didn’t let up throughout the afternoon, finishing with 18 points, eight rebounds and five blocks to lead the Cavaliers to a 61-49 victory over Boston College.

Virginia guard Kihei Clark, right, had 19 points and five assists in the Cavaliers’ win over Notre Dame on Wednesday.

Virginia Tech’s Keve Aluma points during the second half of the Hokies’ win over Miami on Tuesday in Blacksburg.