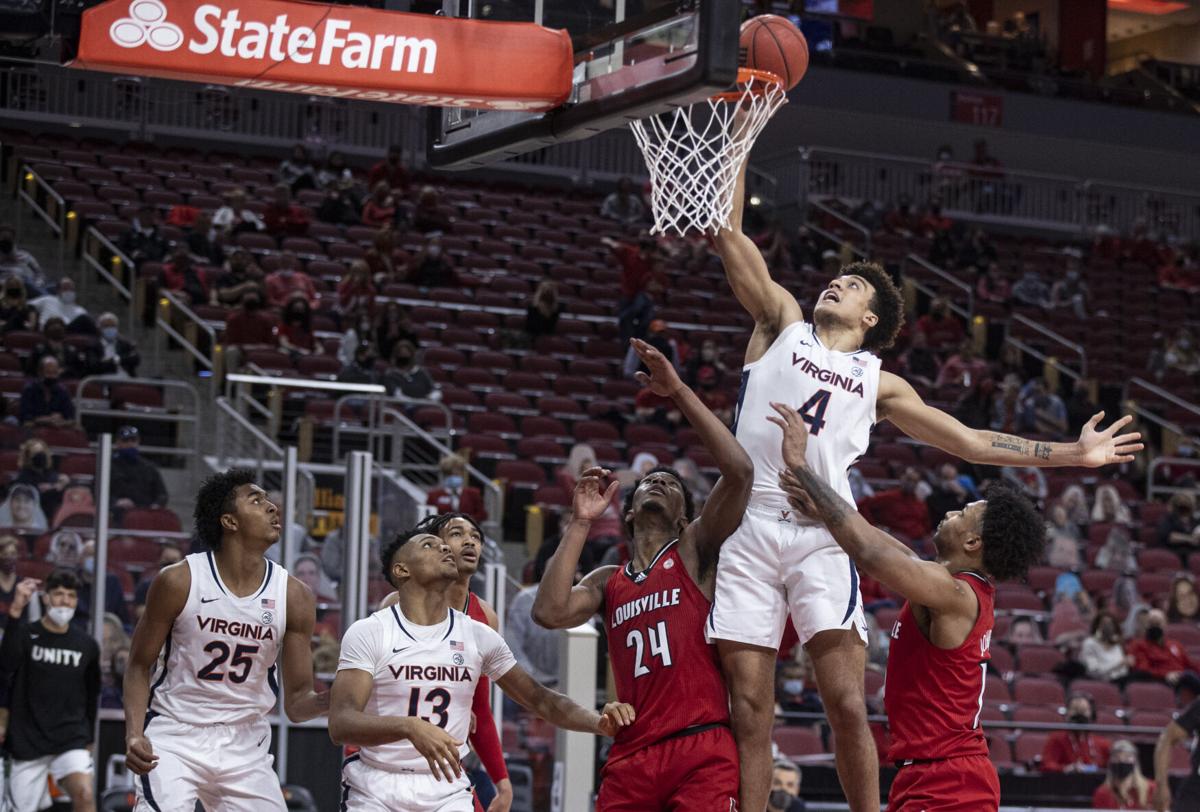 Virginia’s Justin McKoy dunks during the second half of the Cavaliers’ win over Louisville on Saturday at the KFC Yum! Center in Louisville, Ky. 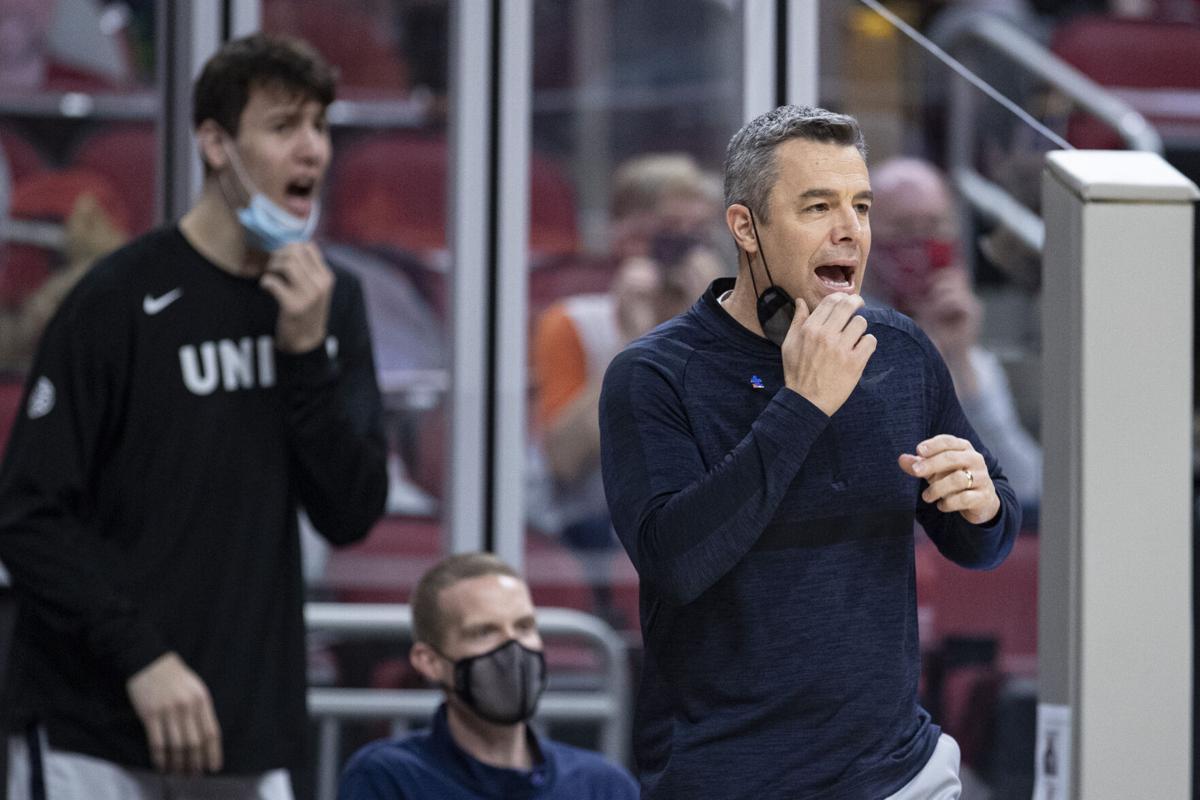 Virginia coach Tony Bennett, right, yells to players during the second half of the Cavaliers’ win over Louisville on Saturday at the KFC Yum! Center in Louisville, Ky.

His team faced one Saturday, and they delivered the knockout blow with their two prize fighters on the bench.

In Saturday’s 68-58 ACC regular-season title-clinching win over Louisville, six UVa players were on the floor during a crucial 11-4 run spanning a nearly five-minute portion of the second half. Redshirt seniors Sam Hauser and Jay Huff weren’t among the six.

They watched from the sideline as their teammates took control.

“Man, those guys played their butts off,” Hauser said. “On the defensive end they were phenomenal, and they were making really good plays on offense. I think that’s what really sealed us the game is that stretch when those guys were in, and hats off to them, they played awesome tonight.”

Hauser and Jay Huff, both ACC Player of the Year candidates, went to the bench with Virginia leading 51-47 and 9:39 left in the game. When Hauser reentered the game with 4:44 remaining, Virginia led 62-51.

Woldetensae made a critical play within a minute of checking into the game. The sharpshooter was fouled taking a 3-point jumper in front of Virginia’s bench, and he knocked down all three free throws to extend the lead to seven with just under nine minutes left.

“They were coming back, so I thought that was significant,” Bennett said of the sequence, which he called “a pivotal moment.”

Virginia led by double digits in the early portion of the second half. Louisville cut the lead to as few as three points, but the Cavaliers hit back without Hauser and Huff on the court.

“We clawed back in it, and sometimes when you climb to get to that mountaintop, it doesn’t just allow you to slide to the other side of the mountain and go down easy,” Mack said. “You lose your grip and you fall back down. Good teams respond, and UVa’s a good team and they responded.”

Make no mistake; Hauser and Huff played the role of heavyweights when on the court.

Hauser scored 24 points in 30 minutes. Every time the Cavaliers needed a shot, the Marquette transfer delivered. He was sensational, and helped carry Virginia to the win with his 9-of-14 shooting performance.

Huff chipped in with 10 points, six rebounds and four blocks. The redshirt senior center went 5-of-6 from the field, making all five of his 2-point attempts. After an unusually inefficient performance against Miami on Monday — he made just two of his 10 shots against the Hurricanes — Huff looked like his normal self with the regular-season title on the line.

For much of this season, Virginia leaned on its frontcourt. The team’s three top players made their mark Saturday, scoring 51 of the team’s 68 points and snatching 20 of the squad’s 34 rebounds. UVa’s top players were fantastic, and the role players contributed alongside the stars.

Notre Dame handed UVa a massive favor early Saturday afternoon. The Fighting Irish, who had dropped four games in a row before Saturday, upset No. 11 Florida State a couple hours before Virginia’s game with Louisville. The win gave Virginia the opportunity to clinch the ACC regular-season title with a victory against the Cardinals.

“We had our eye on the game, knowing that if they lost and we won, we would win it,” Hauser said. “When they ended up actually losing, we couldn’t have a blind eye to it and we knew what was at stake.”

UVa had a puncher’s chance of winning the ACC regular-season championship coming into Saturday. The Cavaliers ended the night celebrating a regular-season conference title.

“That’s all I ever ask for, I always say that, just the chance at a title fight,” Bennett said. “You can’t determine if you’re gonna get them, but when you get into those spots … you come out swinging and I thought our guys did.”

Why Ronaldo and Mbappé's futures are inextricably linked

Why Ronaldo and Mbappé's futures are inextricably linked

Olympic moment: Record-setting 400-meter hurdles final is being called the greatest race ever

The race produced a world record, a masterpiece and slice of history. It might have been one of the best races ever run. Here's why.

The United States’ men’s basketball team remains the favorite to win gold at the Tokyo Olympic Games, but an international team lead by an NBA…

A grueling nine-week summer conditioning period came to an end Friday for the Virginia football team when redshirt senior defensive lineman Mandy Alonso pulled a sledgehammer over his head and slammed it down to “break the rock.”

Virginia’s Justin McKoy dunks during the second half of the Cavaliers’ win over Louisville on Saturday at the KFC Yum! Center in Louisville, Ky.

Virginia coach Tony Bennett, right, yells to players during the second half of the Cavaliers’ win over Louisville on Saturday at the KFC Yum! Center in Louisville, Ky.