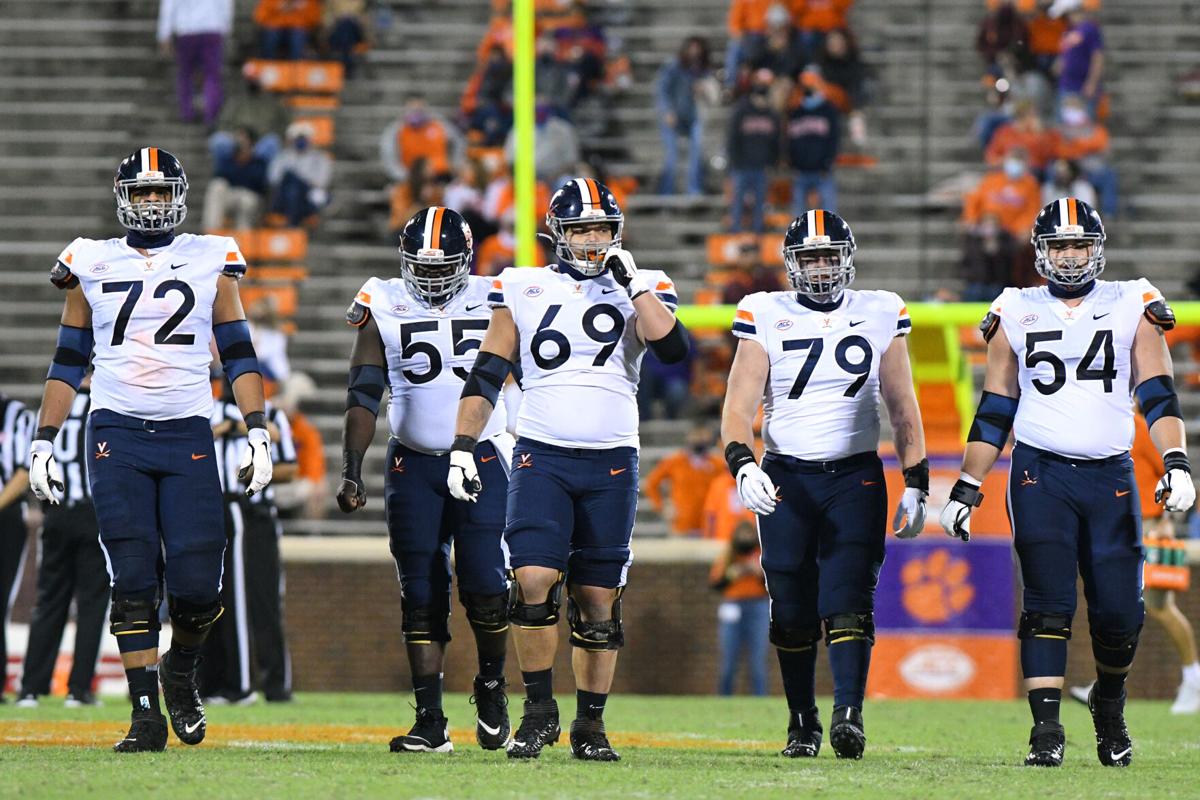 Virginia's offensive linemen make their way down the field during their game against Clemson on Oct. 03 at Memorial Stadium in Clemson, South Carolina. 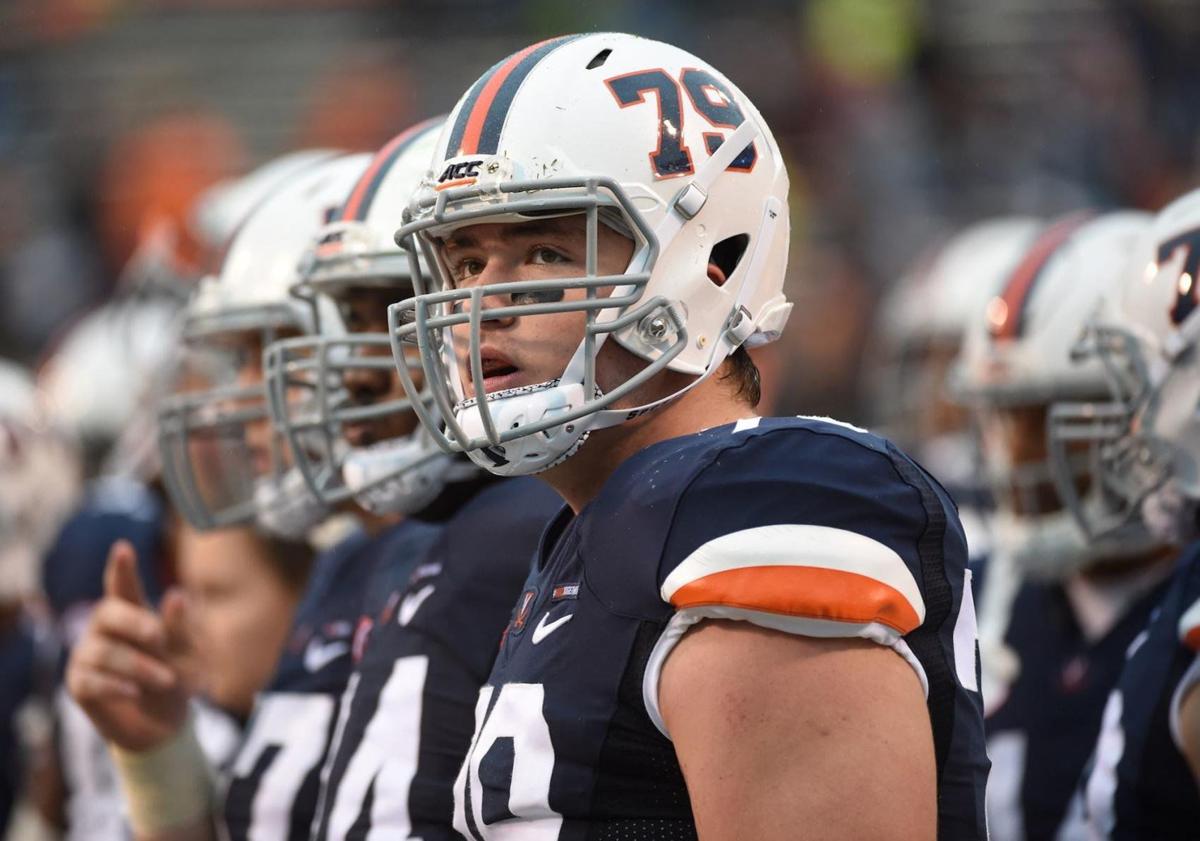 The Virginia football team waltzed into Notre Dame Stadium a season ago undefeated, but with one glaring weakness: the offensive line.

The Fighting Irish exposed the team’s weak spot, sacking the Wahoos eight times and forcing five turnovers, many created by pressure on the quarterback. With sacks included, the Cavaliers rushed for an abysmal four yards on 29 attempts.

“Ultimately, our inability to consistently protect our quarterback in the pass game was the difference in the game,” head coach Bronco Mendenhall said after the game.

The loss to Notre Dame jumps out as a key landmark in the development of the offensive line.

A season ago in late September, the Fighting Irish dominated UVa’s offensive front. Through a pair of ACC games this fall, the Cavaliers look dramatically improved from their embarrassing showing against one of the country’s premier programs.

In its first game this season, Virginia’s offensive front paved the way for Wayne Taulapapa to rush for a career-high 95 yards in a win over Duke. Perhaps most impressively was the consistency of Taulapapa’s runs. He didn’t record a run over 19 yards, as he steadily worked his way toward the 95-yard mark. He ran through solid holes throughout the contest.

Through two games, UVa is averaging 167.5 yards per game on the ground. That’s nearly 50 yards higher than last season’s average of 121.2. Even with one of the team’s games coming against Clemson’s stout defense, the Cavaliers have shown an ability to move the football on the ground.

Credit goes to the offensive line.

“Absolutely one of the bright spots of my journey here to the University of Virginia,” Mendenhall said. “[Offensive line] coach [Garett] Tujague has worked so hard, and has taken his lumps and has been working and growing and trying to get depth and trying to get the performance the way we, he and I, we all want it. And for the first time in going in, here in our fifth season, our offensive line, I would say is the cornerstone of why we're having success as a program and as a football team and as an offense.”

Players and coaches are quick to praise Tujague for his work with the group. The development of the starters has led to improved play up front.

Olu Oluwatimi gives the Cavaliers a steady presence at center. Ryan Swoboda has developed into his 6-foot-10 frame, making him a quality option at right tackle to protect quarterback Brennan Armstrong’s blind side. Chris Glaser, a senior, mans the right guard position.

Dillon Reinkensmeyer, one of the most versatile players along the line, currently slides in as the team’s starting left guard. He’s flanked by left tackle Ryan Nelson. Every player on the offensive front weighs at least 305 pounds and stands at least 6-3, making the group a formidable front.

Depth at the position is improving, and Bobby Haskins should soon return from injury and work his way into the mix. The starting five will gladly welcome him into the fold.

“There’s no animosity between the O-line, who plays or who doesn’t play, we just want to put our best product out there on the field,” Reinkensmeyer said. “We know that we’re going to rotate if guys get tired, so guys know there’s opportunity, but I think there’s a gigantic difference between when I first got here and now. That kind of speaks to Coach Mendenhall’s ideology and Coach Tujague and the job he’s done.”

The improved play doesn’t just help Taulapapa and the running game, though. In Mendenhall’s estimation, it’s critical for the maturation of Armstrong.

“When you don't have protection or if you're not certain how the front will play, that really can delay a quarterback’s development, or it can stop and actually cause problems that halt a quarterback’s development and sometimes allow them not ever to be developed because there's things that have happened that just don't go away, or the quarterbacks can't overcome mentally,” Mendenhall said. “So Brennan is the benefactor right now of, probably the best situation he could have of a consistent offensive front, while he's inheriting the reigns of being the starting quarterback.”

Perhaps the best news for UVa faithful is the potential of the position group in future seasons, likely with Armstrong still leading the way at quarterback.

Haskins, Nelson, Oluwatimi and Swoboda are all juniors.

Four-star offensive line prospect Andrew Gentry, considered by some outlets to be a top-100 recruit nationally in the 2020 class, will join the team in 2022 after his religious mission trip concludes. The team’s 2021 class currently has five verbal commitments from offensive linemen. The highest-rated recruit in the class is Logan Taylor, an offensive lineman who plays his high school football in Virginia.

For the first time under Mendenhall, concerns about the offensive line seem almost nonexistent.

“That’s when teams don’t just have good seasons, they become really good programs, and consistent and sustainable,” Mendenhall said. “It’s the biggest difference in our program from a year ago to this year is the offensive line play.”

Virginia's offensive linemen make their way down the field during their game against Clemson on Oct. 03 at Memorial Stadium in Clemson, South Carolina.