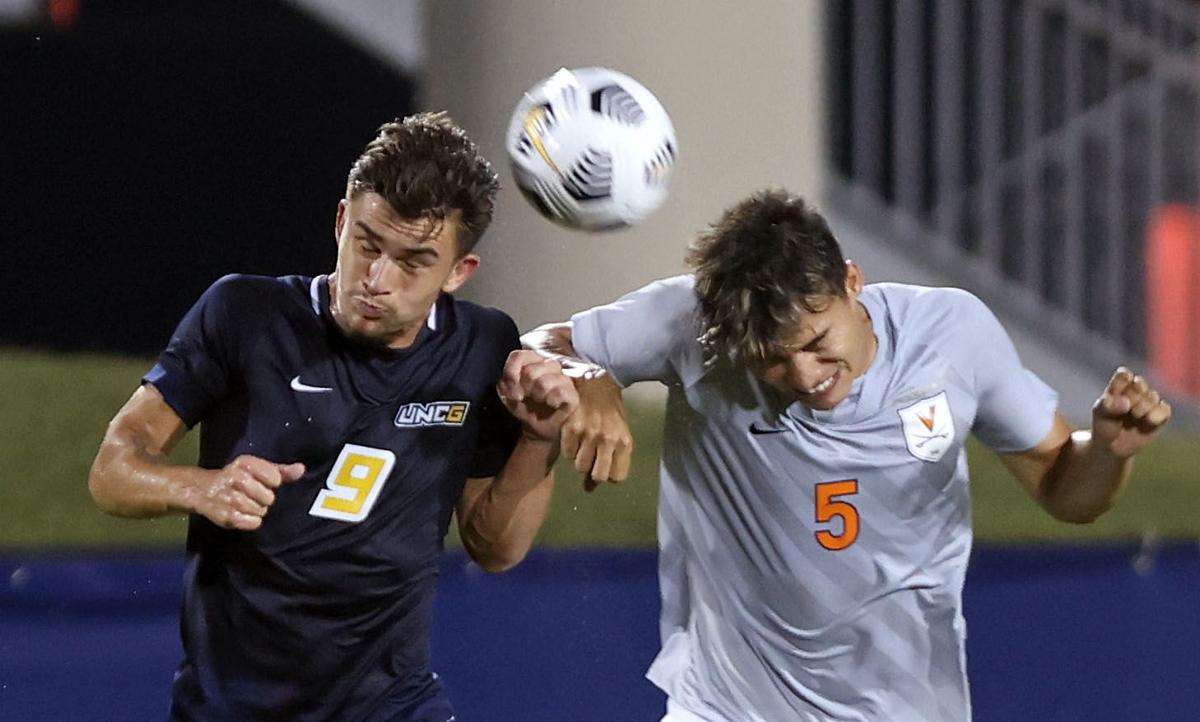 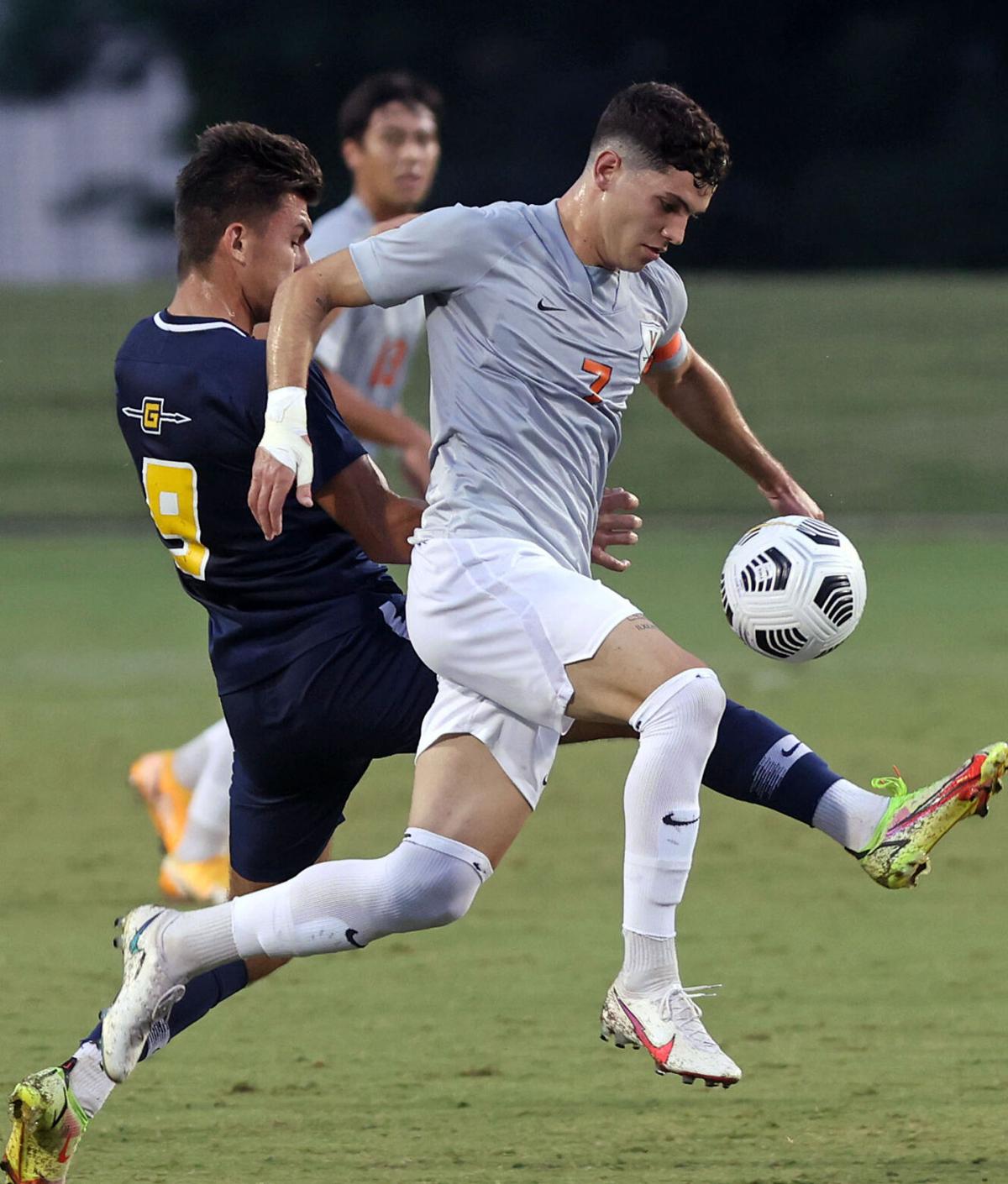 Virginia's Leo Afonso handles the ball next to UNC Greensboro’s Nelson Oceano during the game Tuesday at Klöckner Stadium. 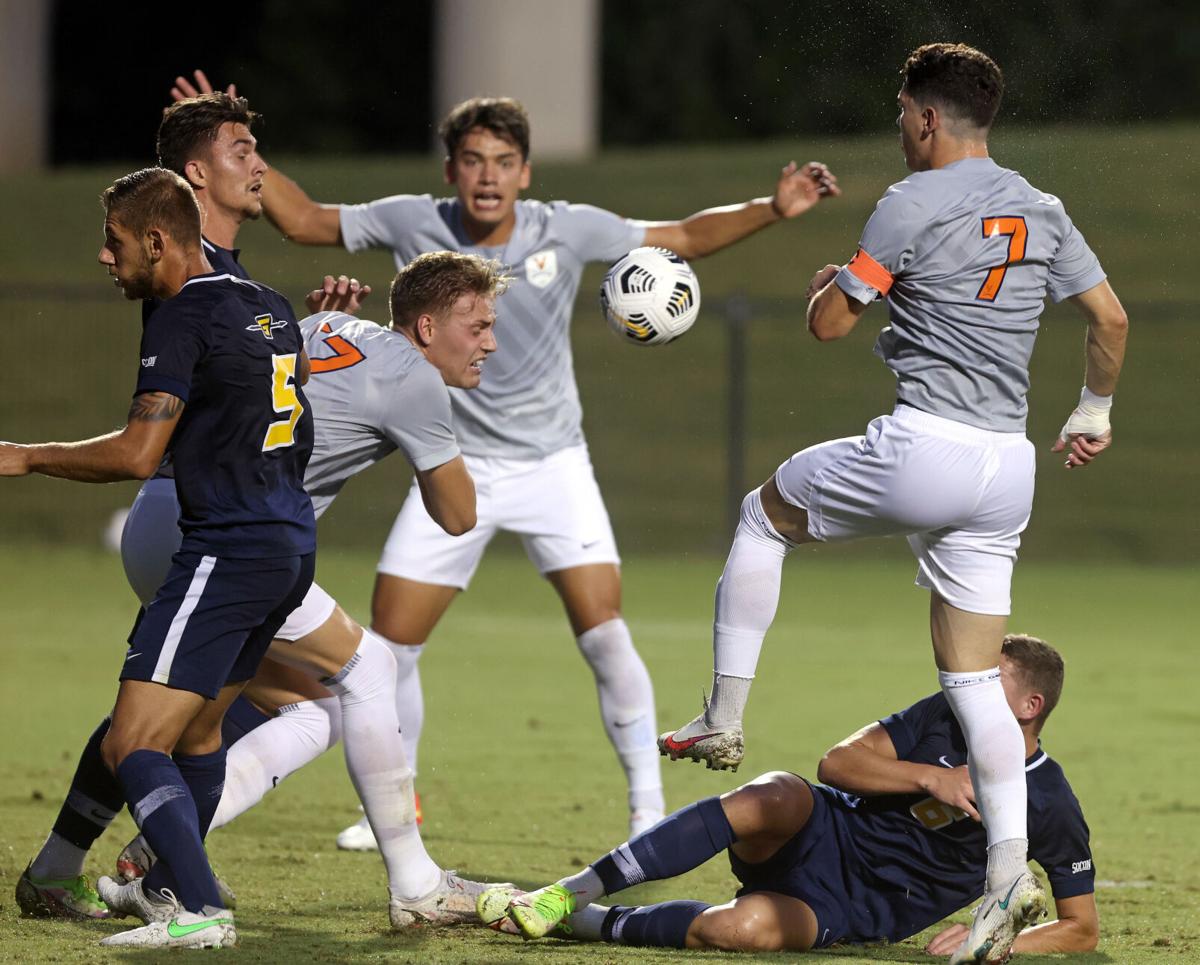 Virginia players fight for control of the ball with UNC Greensboro defenders during Tuesday's game at Klöckner Stadium.

It wasn’t enough time for either team to find the back of the net.

The Cavaliers (2-2-1) played UNCG (3-2-1) to a scoreless draw. While both teams had the occasional scoring chance, the game was largely played in the midfield.

“I’m actually proud of the performance,” Virginia head coach George Gelnovatch said. “I think UNC Greensboro is a very good team, and I think on the night — I don’t know about week in and week out — but on the night, that’s an ACC opponent in my opinion.”

Virginia started the match slowly, as UNC Greensboro dominated possession in the opening 15 minutes. The Spartans recorded three shots and earned a corner kick in the first 15 minutes of the match.

After a slow start, Virginia began to dictate tempo as the match progressed. By the final 25 minutes, the Cavaliers were doing well to possess the ball. They controlled the ball in the middle of the field, sporadically pushing toward the UNCG box.

“They started pressing us pretty roughly the first 15 minutes," UVa defender Andreas Ueland said, "but we got through that hard wave and then I felt like we got into the game after that.”

UNCG seemed content to play defense in the second half. The Spartans dropped numbers back, and the Cavaliers didn’t aggressively move numbers forward. The result was a select group of Virginia players struggling to find open spaces and scoring chances in crowded areas.

Daniel Wright recorded a shot attempt in the 78th minute, but his angle from the left side of the box wasn’t great. He pulled the ball wide to the right side of the net.

A header from Leo Afonso in the final 10 minutes of the half looked like a possible goal, but he just missed wide to the right. The Cavaliers maintained the pressure.

Kevin Ogudugu ripped a shot just high in the 87th minute, keeping the match scoreless. The teams went to overtime without anything on the scoreboard.

Neither team came particularly close to scoring in the first overtime. UNCG recorded the lone shot of the period in the 100th minute, but it dribbled wide left of the net.

Ogudugu nearly ended the match in the 107th minute when he corralled the ball in the center of the box, but UNCG goalkeeper Niclas Wild made a save. He finished the match with a pair of saves. UVa goalkeeper Holden Brown chipped in four for Virginia.

“We conceded three goals last game, and now we kept a clean sheet, so that’s something to be proud of,” Ueland said.

In the end, neither team put together the offensive sequence needed to score.

“At home, we want to get the win,” Ueland said.

Finishing with a draw frustrated the Cavaliers, but they weren’t distraught with a hard-earned tie.

Virginia hits the road for its next match, a rivalry showdown with Virginia Tech scheduled for Friday at 7 p.m. The Hokies are ranked 17th nationally, having taken down reigning national champion Marshall in late August. Marshall sits at No. 6 in the latest national polls.

Last year’s matches between UVa and Virginia Tech were intense, with the Hokies taking two of the four contests. Virginia won a match in the spring, and the programs played to a tie in one of the fall games. Prior to Virginia Tech’s first win last season, UVa had a 16-match unbeaten streak against the Hokies.

“I feel like this game we just played was an equivalent of a level of play like Tech for example,” Gelnovatch said. “The trick is [Virginia Tech] didn’t play tonight. We just played a game and two overtimes, so it’s really just a matter of now recovering and getting ready to play.”

Winning in the ACC is understandably a focus for the Cavaliers. A win over the Hokies would give Virginia its first conference win of the season. The Cavaliers fell to Syracuse in their ACC opener.

Up next: The Cavaliers travel to Virginia Tech on Friday.

Virginia's Leo Afonso handles the ball next to UNC Greensboro’s Nelson Oceano during the game Tuesday at Klöckner Stadium.

Virginia players fight for control of the ball with UNC Greensboro defenders during Tuesday's game at Klöckner Stadium.