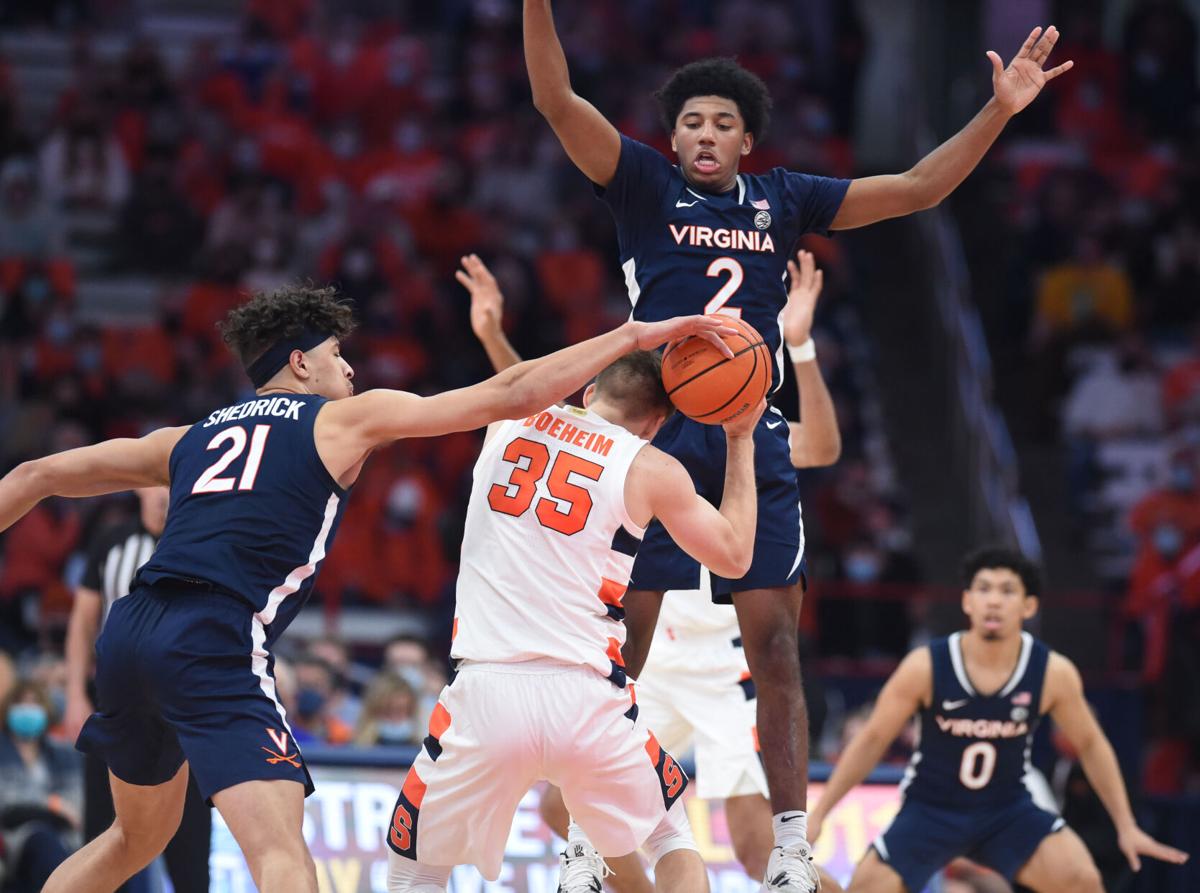 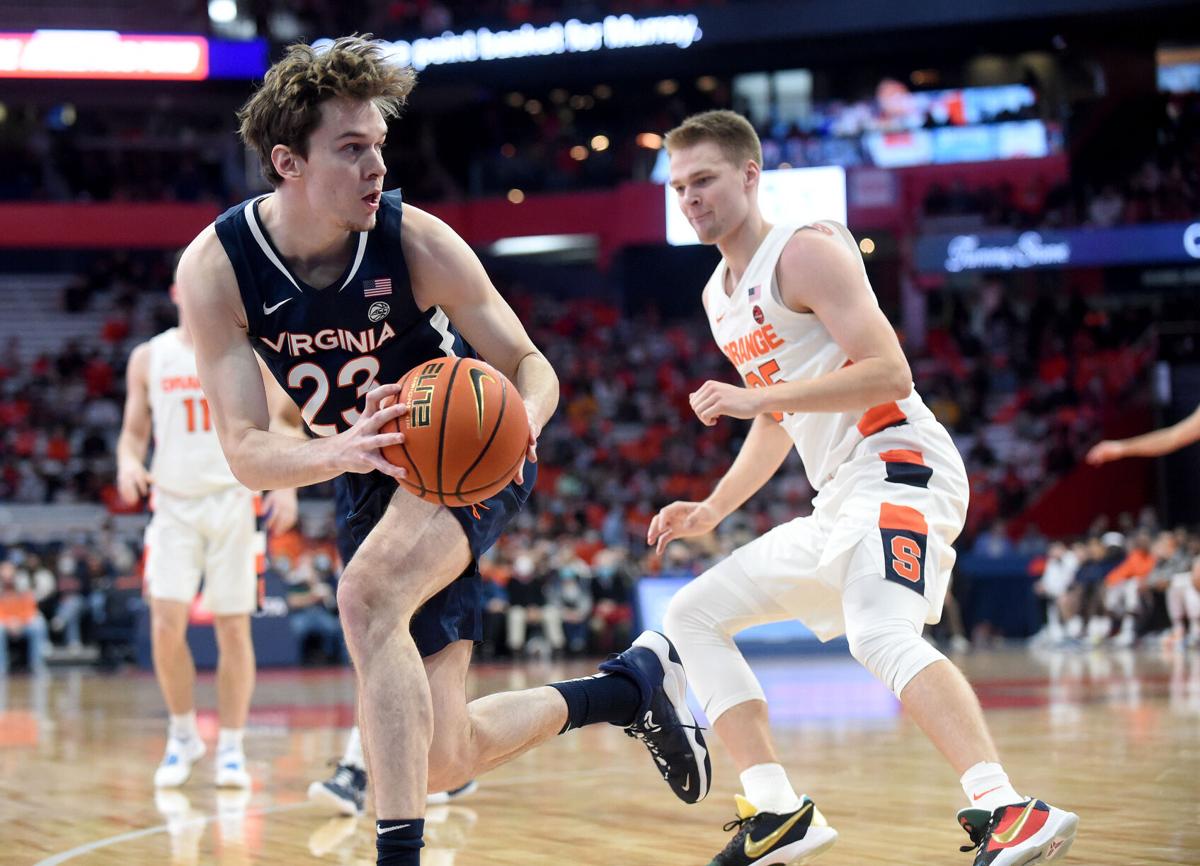 Virginia guard Kody Stattmann saves the ball from going out of bounds during Saturday’s game against Syracuse in the Carrier Dome.

SYRACUSE, N.Y. — There were a few occasions when it felt as if the orange-clad faithful inside the Carrier Dome would get a chance to continue on their crescendo to ultimately reach the potential pinnacle of sound.

Buddy Boeheim’s dunk and free-throw conversion for an old-fashioned three-point play put Syracuse up two in the second half and had the 17,000-plus on their feet. His brother Jimmy Boeheim’s layup to knot the score at 52 later on did the same.

So did Buddy Boeheim’s 3-pointer to cut the Orange’s deficit to three with less than four minutes to go.

But the visitor always resisted on Saturday night.

Virginia answered those could’ve-been propelling moments for Syracuse with noise-canceling shots or runs and the Cavaliers ultimately pulled away for a 74-69 road victory in ACC action. It was UVa’s (8-5, 2-1 ACC) third straight win against the Orange (7-6, 1-1 ACC) dating back to last season.

Following the 3-pointer from Buddy Boeheim, Cavaliers senior guard Kihei Clark delivered one of his own from well beyond the left wing on the next possession to push their advantage back to six points at 68-62.

“That was huge,” UVa coach Tony Bennett said of Clark’s clutch shot. “It was deep. I was actually looking away for a second and then it went up, and I just saw the tail end of it and the ball going in. We needed that.”

Before the final buzzer, Clark added an acrobatic layup and then made both ends of one-and-one free throw with 22 seconds left to seal the win and give the Cavaliers the final tally they’d take the game by.

With 17 points, he finished as one of four scorers in double figures for the Hoos. Guard Armaan Franklin also had 17. Forward Jayden Gardner added 15 points and forward Kadin Shedrick had 12 points to go along with 11 rebounds for a double-double.

The contest’s top scorer on Saturday was Buddy Boeheim with 27 points.

But after his wowing dunk through a foul and the made free throw, UVa put together a run of seven points in a row to go ahead 52-50. Then following Jimmy Boeheim’s layup, the Cavaliers tallied five straight points to move in front 57-52 with 8:18 to play.

As part of that sequence to go up by five, Clark hit the second of his three 3-pointers when Gardner found him open. The Cavaliers moved the ball well throughout to get open looks, and were 7-of-20 from 3 against the Orange’s signature 2-3 zone.

“I thought we kept our composure,” Bennett said, “and kept playing against that zone. And we played really good defense for the most part. … So, yeah, I thought there was some resiliency.”

Syracuse had seized the energy of the contest by halftime after center Jesse Edwards’ awkward running shot at the buzzer evened the score at 33 and wiped out the lead UVa held for almost all of the opening stanza.

The Cavaliers had led by as many as 12, building it after Franklin and Clark combined to knock down the Cavaliers’ first three shots from beyond the arc. Franklin made his first two tries from deep — one after a shot fake and another from the corner — and Clark’s gave the Hoos a 13-6 lead early on.

From there, the Cavaliers were able to continue succeeding against the ACC’s worst scoring defense. Syracuse entered Saturday yielding more than 75 points per game.

Off the bench, UVa guard Kody Stattmann knocked down a jumper and a pair of free throws to push its advantage to 25-13.

The good fortune ran out following Stattmann’s contributions until halftime, though. After making its first three 3s, UVa made only one of its last 11 3-point attempts prior to heading into the locker room.

But just as the Cavaliers overcame a hostile a crowd in a tough venue to leave with a win, they bounced back in the second half.

“We’re still coming together as a team,” Franklin said. “We’re not where we want to be, but this is a step in the right direction for us, battling adversity with scoring runs and being locked in.”

Virginia guard Kody Stattmann saves the ball from going out of bounds during Saturday’s game against Syracuse in the Carrier Dome.