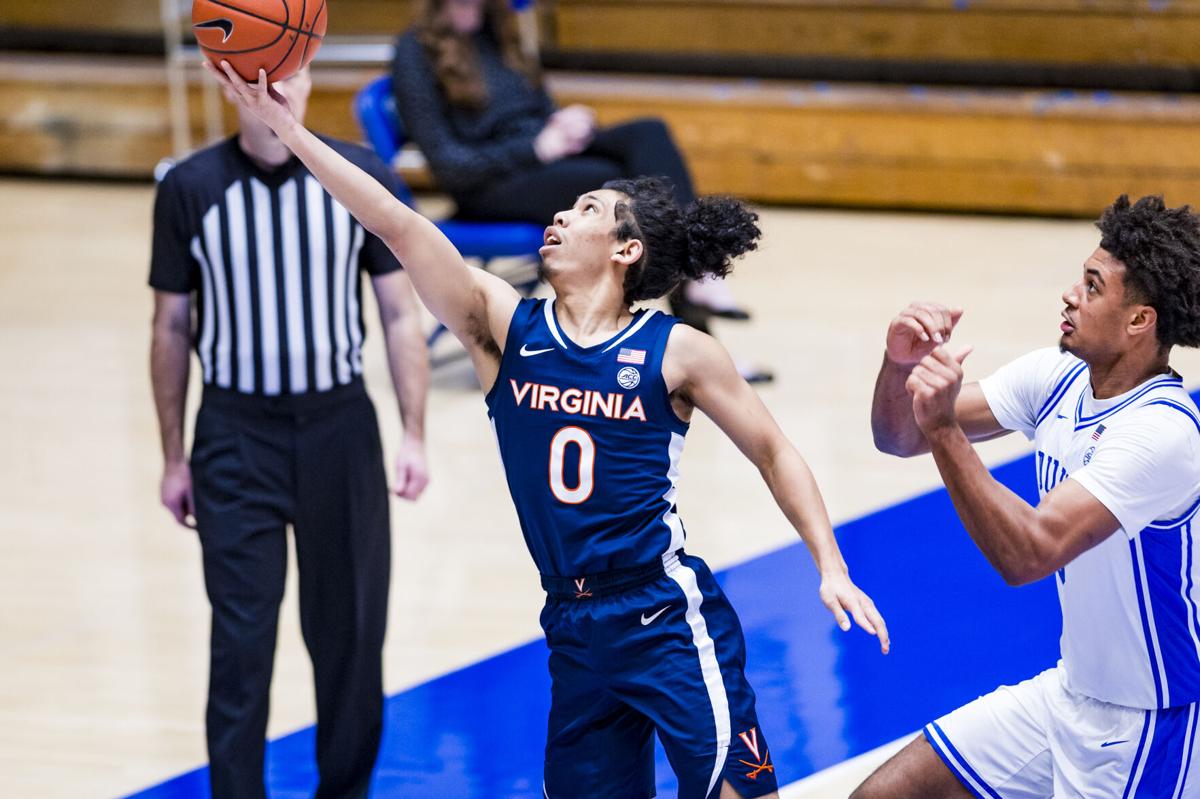 Virginia guard Kihei Clark goes up for a shot against Duke on Saturday at Cameron Indoor Stadium. 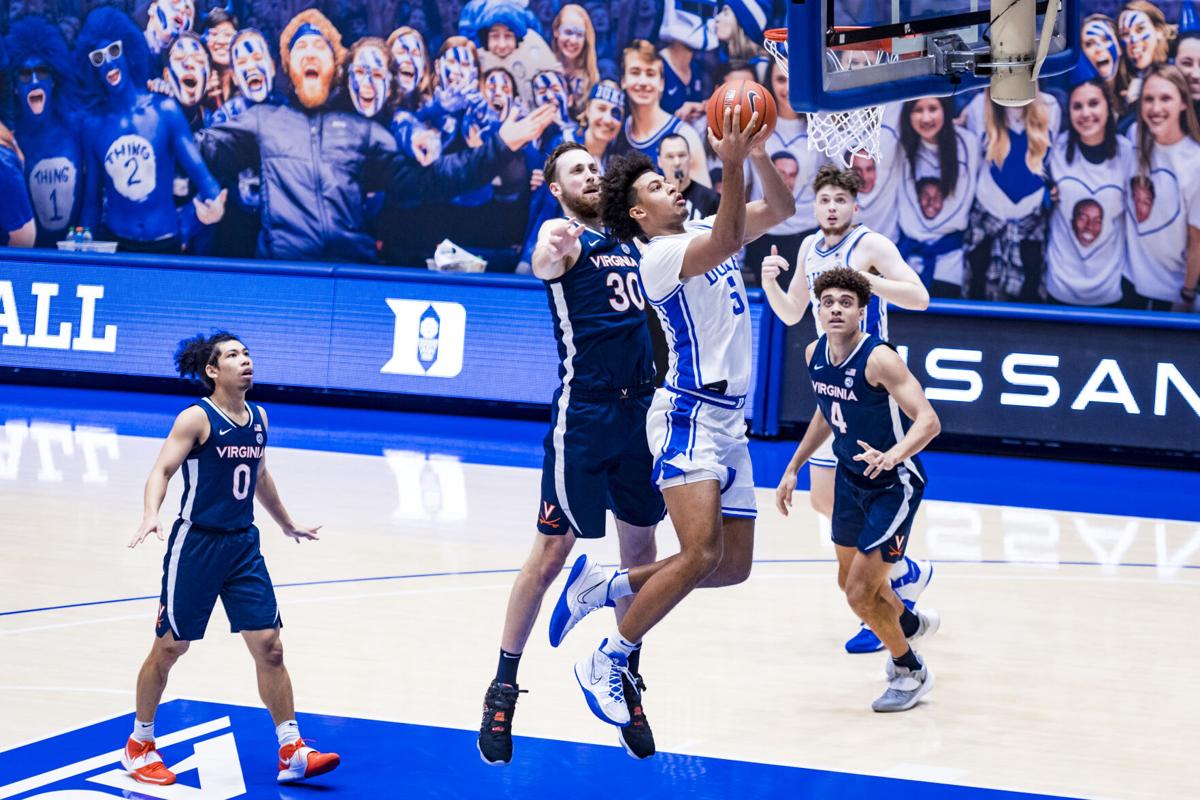 Duke’s Jaemyn Brakefield goes up for a shot against Virginia on Saturday at Cameron Indoor Stadium.

Jay Huff hung from the rim in his hometown arena as the final buzzer sounded and Duke’s players celebrated.

The Virginia senior's put-back, two-handed dunk off a Kihei Clark miss didn’t count, coming after the clock expired, allowing the Blue Devils to hold off No. 7 UVa for a 66-65 win Saturday night.

"As soon as I caught it I had already seen the buzzer go off," said Huff. "But I figured if I was up there, I might as well.”

Trailing by a point, Huff rebounded a missed free throw by Duke’s D.J. Steward and got the ball to Clark, the team’s junior point guard. Clark mishandled his dribbled at the top of the arc, recovered and hoisted a 3 that came up short of the rim.

Huff, a Durham native who grew up attending Duke games, caught the ball in the air and slammed it through, but after the horn had gone off.

“We knew it was late,” said UVa senior forward Sam Hauser. “You could see the buzzer go off.”

Sophomore forward Matthew Hurt scored 22 points and freshman forward Jaemyn Brakefield’s layup with 1:59 to play lifted the Blue Devils to their third straight win, dropping the Cavaliers to second place in the ACC, behind Florida State.

Earlier this week, Duke star freshman Jalen Johnson announced he was opting out of the rest of the season to focus on his NBA future.

Virginia (15-5, 11-3 ACC) hadn’t played since getting drilled 81-60 by the Seminoles on Monday night, a game coach Tony Bennett descried as a serving of humble pie. Saturday’s contest had its own bitter tasted as UVa led five points with 6:33 to play, but couldn’t finish the job.

“They made timely plays and winning plays,” said Hauser after his team dropped consecutive games for the first time this season.

Huff finished with 20 points and 12 rebounds in his final homecoming game, and Hauser, playing at venerable Cameron for the first time, added 19 and 8, in one of the more physical showdowns between the two ACC powers.

The Cavaliers lost despite shooting 50% for the game. They didn’t score in the final 3:08 of the game, a contest Duke coach Mike Krzyzewski described as “epic.”

Duke (10-8, 8-6) entered Saturday night seven spots and four games back of Virginia in the ACC basketball standings, but neither team ever had more than two shots worth of separation in this one.

Five of the last seven meetings between the two teams have now been decided by two points or fewer.

The Blue Devils led 39-36 at the half, and things remained tight after the break, down to the final possession.

On that play, Bennett had hoped his team would be able to drive to the basket to score or draw a foul after the Steward free throw miss. Instead, the broken play ended with the Clark long jumper and Huff's seconds-too-late slam.

“We’re like, 'If they miss it, attack. Get to the rim, we’re in the bonus,'" said Bennett. "I was hoping we could get into the lane and get one up.”

Virginia, which played Saturday night’s game without senior guard Tomas Woldetensae, who was unavailable due to contact tracing, hosts North Carolina State on Wednesday at John Paul Jones Arena, where the Cavaliers are 9-0 this season.

After three productive weeks in the G League, former Virginia star Ty Jerome was recalled by the Oklahoma City Thunder on Thursday.

Instead of turning the page on a rough chapter, the Virginia men's basketball team added another page to its losing streak, which grew to three games after a lackluster showing against N.C. State.

Mental fatigue catching up with No. 15 Virginia heading into Senior Night

Has all the added stress of COVID-19 protocols, isolating from friends and family, taking remote courses and playing in front of mostly-empty arenas finally caught up with the Cavaliers?

Three takeaways from Virginia’s win over Miami, which snapped a three-game losing streak.

On Wednesday, Virginia surrendered 68 points to N.C. State as it extended its losing streak to three games. The Cavaliers have allowed at least 66 points and 45% shooting in all three losses.

One of the year's best feel-good stories has met the cold realities of the NFL.

Floundering at both ends of the floor, the No. 15 Cavaliers fell 68-61 to North Carolina State on Wednesday at John Paul Jones Arena, losing their third straight game and falling at home for the first time this college basketball season.

The Virginia football program added another player to its 2022 recruiting class Wednesday.

The Albemarle football team tops Monticello in its first game of the season.

The Louisa County football team kicks off its season with a 49-0 victory over Charlottesville.

Virginia guard Kihei Clark goes up for a shot against Duke on Saturday at Cameron Indoor Stadium.

Duke’s Jaemyn Brakefield goes up for a shot against Virginia on Saturday at Cameron Indoor Stadium.