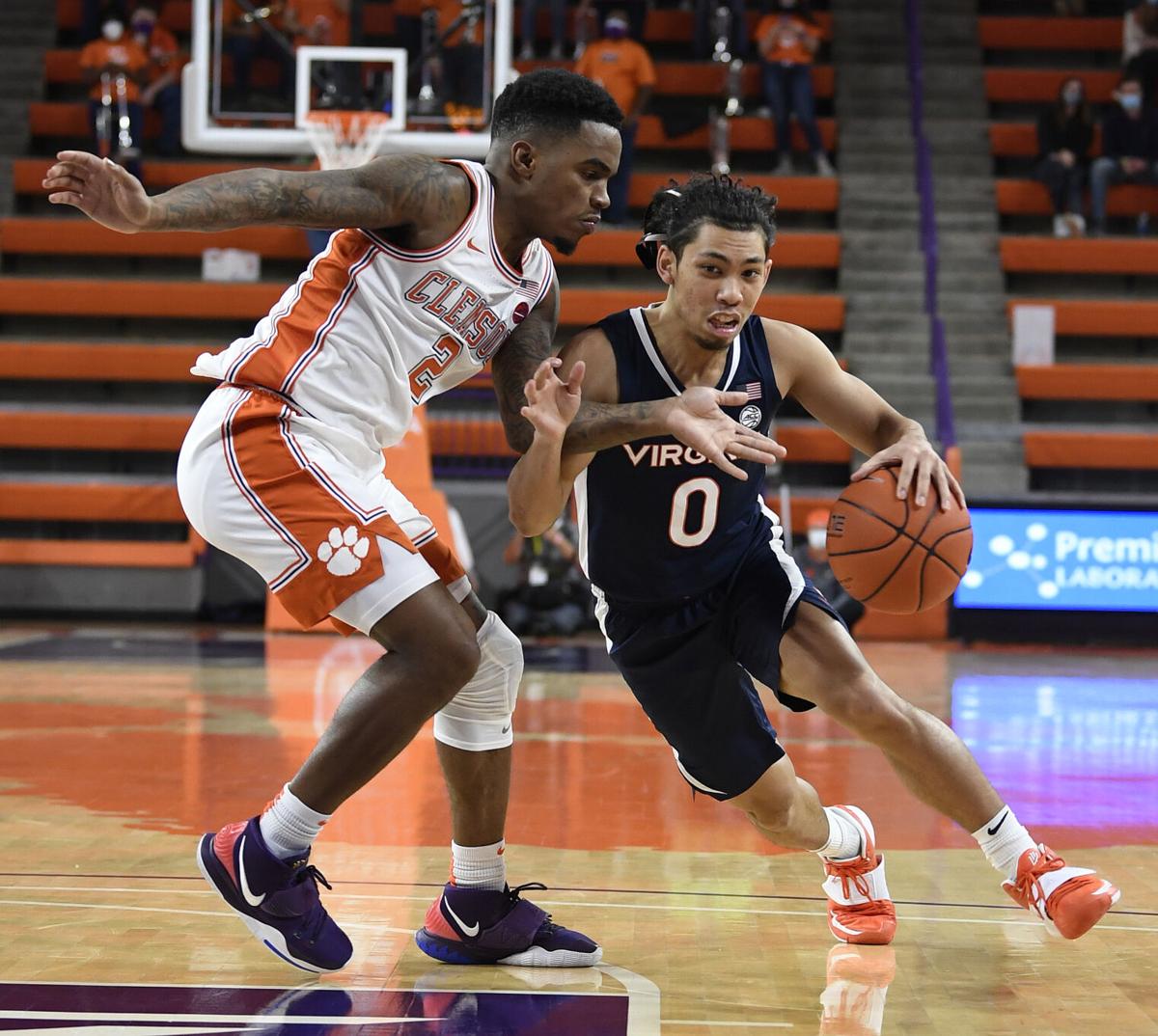 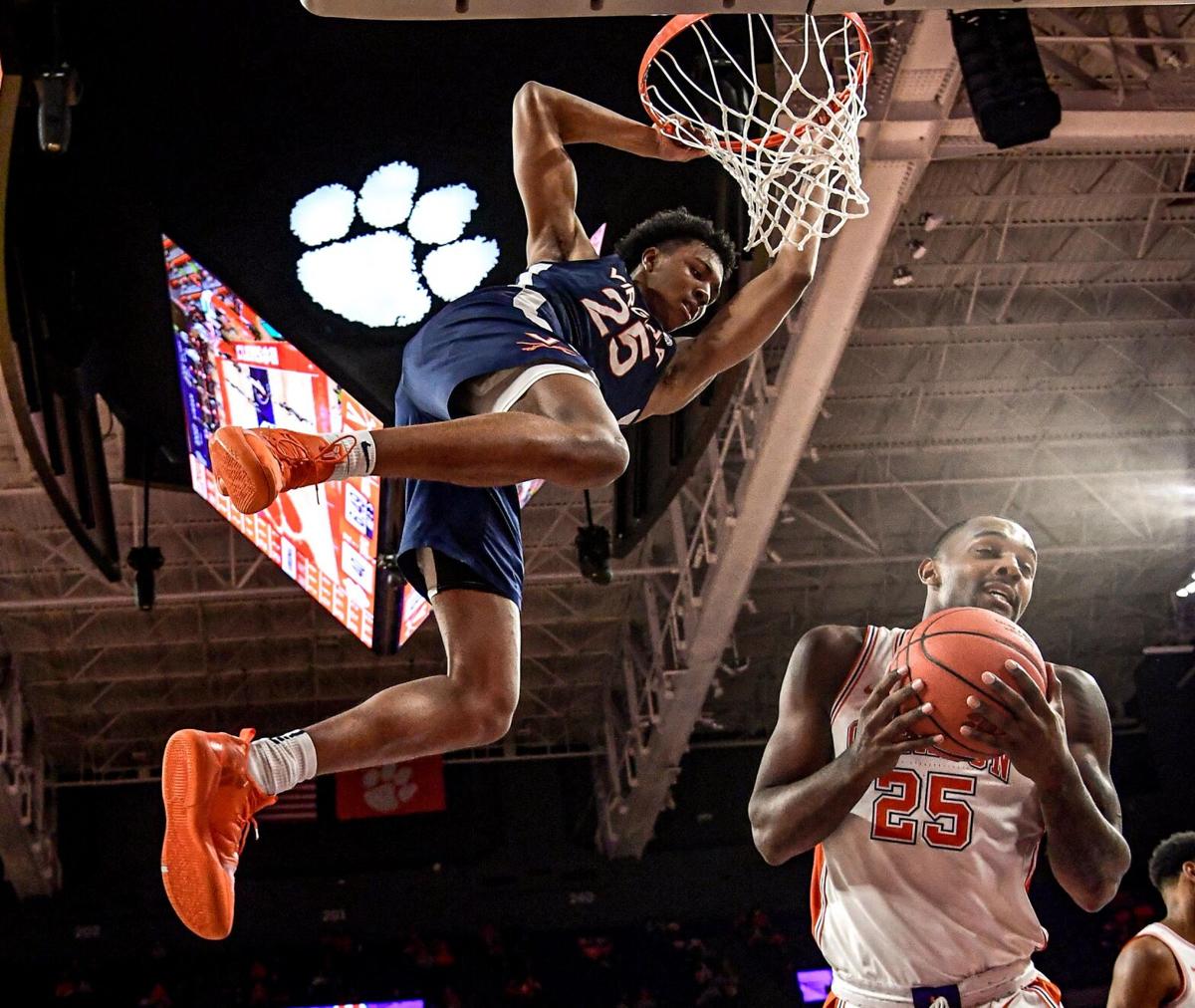 Virginia guard Trey Murphy III hangs on the rim after dunking near Clemson senior forward Aamir Simms during the second half on Saturday in Clemson, South Carolina.

Clemson came into Saturday’s showdown with Virginia as the top per-possession defense in college basketball.

UVa, a program renowned for its defensive success, seemed to take that personally.

Perhaps rusty from 10 days between games due to a COVID-19 pause, the Tigers went 11 minutes and 48 seconds between made shots in the first half. While rust certainly may have played a factor in the defeat, Virginia looked spectacular on both ends.

Jay Huff found a cutting Kihei Clark at the rim for easy layups multiple times in the first half. Woldetensae came off the bench and reminded ACC foes and UVa fans what he’s capable of from beyond the 3-point arc, finishing with 14 points and four made 3-pointers.

“I hope that it’s a breakthrough,” Woldetensae said of his performance.

Ultimately, the Cavaliers reminded the conference why they were picked to win the league before the season began.

Clemson made its first shot of the game when Aamir Simms scored in the post. After Simms’ make, the Tigers went ice cold, going nearly 12 minutes before making another shot, and just over 10 minutes between points.

Virginia opened up a 20-3 lead when Huff pivoted in the post and slammed a ball through the hoop with his right hand.

UVa stretched the lead to 31-7 after a pair of Clark free throws, leading by 24 at the final media timeout of the first half. Fortunately for Clemson, a 10-0 run that stretched into the opening minute of the second half pulled the Tigers within 14 points.

With the game seemingly close to becoming competitive, the Wahoos ripped off a 10-0 run of its own to grab a 43-19 lead.

The dominance only continued from there.

“We didn’t take our foot off the gas, and we were for the most part sound and made Clemson earn their baskets,” Bennett said.

UVa made its first nine 3-points shots of the second half, stretching the lead to 70-37 after a Woldetensae 3-pointer. A couple possessions later, Reece Beekman stole a pass and slammed home a dunk to put Virginia up 76-37 and force a Clemson timeout.

“When things are going like that, it’s very contagious,” said Virginia forward Sam Hauser, who scored 14 points and went 4-of-5 from 3-point range. “I think guys coming off the bench and even guys on the floor at the time, once they saw other people making shots they could get more confidence to shoot and take good shots.”

Clark and Beekman were among those who were phenomenal for UVa. The two point guards combined to score 20 points on 9-of-14 shooting while adding 11 assists to just one turnover. As a team, UVa tallied 22 assists, its first 20-assist showing in an ACC game since a 79-53 win over Syracuse in March of 2019.

Eventually, the Cavaliers did miss a second-half 3-pointer, but the outcome was never in doubt Saturday night.

The last time Virginia played a ranked team, it lost by 23 points to No. 1 Gonzaga. Bennett called his team “overwhelmed.”

Saturday, against No. 12 Clemson, the Wahoos overwhelmed the top-ranked defense in the country. They showed why they entered the season as a top-5 team as they delivered on both ends of the floor.

UVa sent a clear message to the ACC that it’s still the team to beat.

“Obviously you take a hard punch to the face from Gonzaga, it’s hard to get up from that, but you learn, you live, you move on,” Hauser said, “and I think we’ve taken some great strides.”

The Virginia women’s soccer team is headed to the Elite Eight for the first time since 2015.

Virginia, Rice square off with spot in Elite Eight on the line

The Virginia women's soccer team squares off with Rice on Wednesday at 9 p.m. with a spot in the Elite Eight on the line. It’s the only Sweet 16 match between two unseeded squads.

The Virginia baseball team was three outs away from entering a rare idle weekend with positive momentum. Instead, the Cavaliers threw away a 5-0 lead and suffered a 7-5 home midweek loss to VCU on Tuesday night.

Virginia guard Trey Murphy III hangs on the rim after dunking near Clemson senior forward Aamir Simms during the second half on Saturday in Clemson, South Carolina.