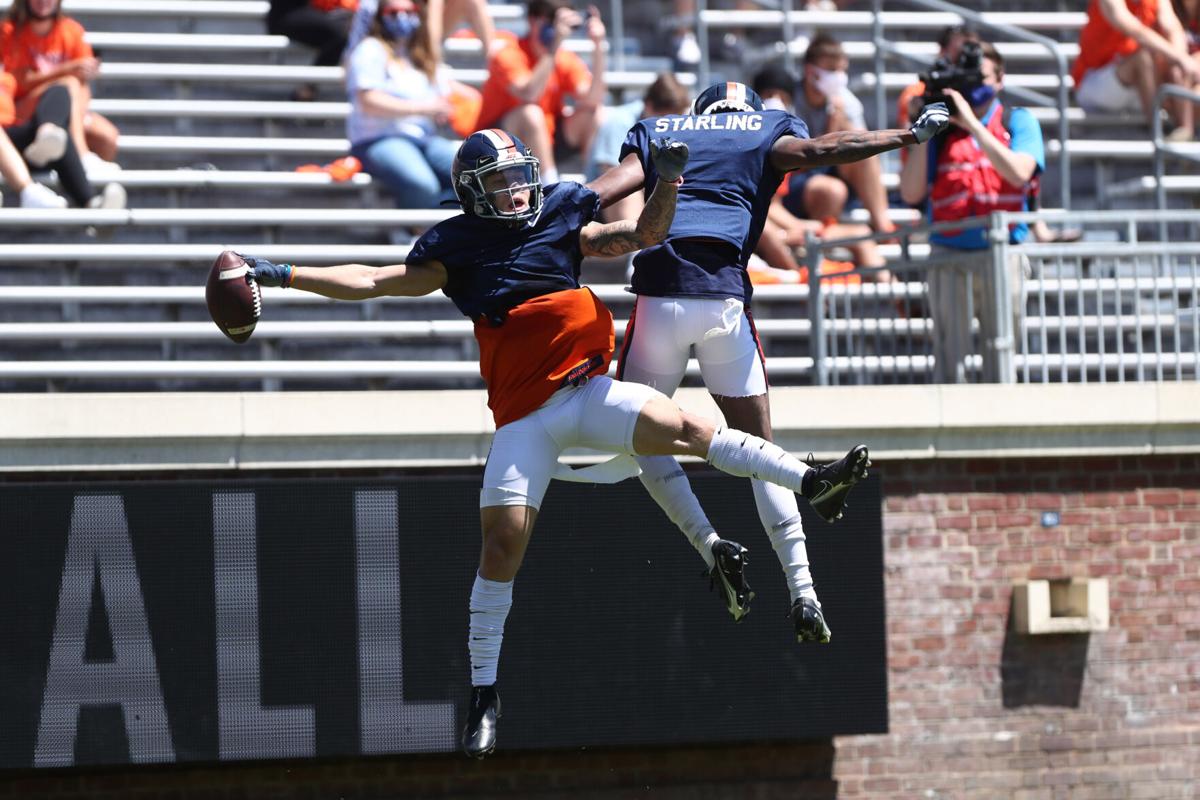 Virginia players celebrate after a score during the final UVa spring football practice on Saturday at Scott Stadium. 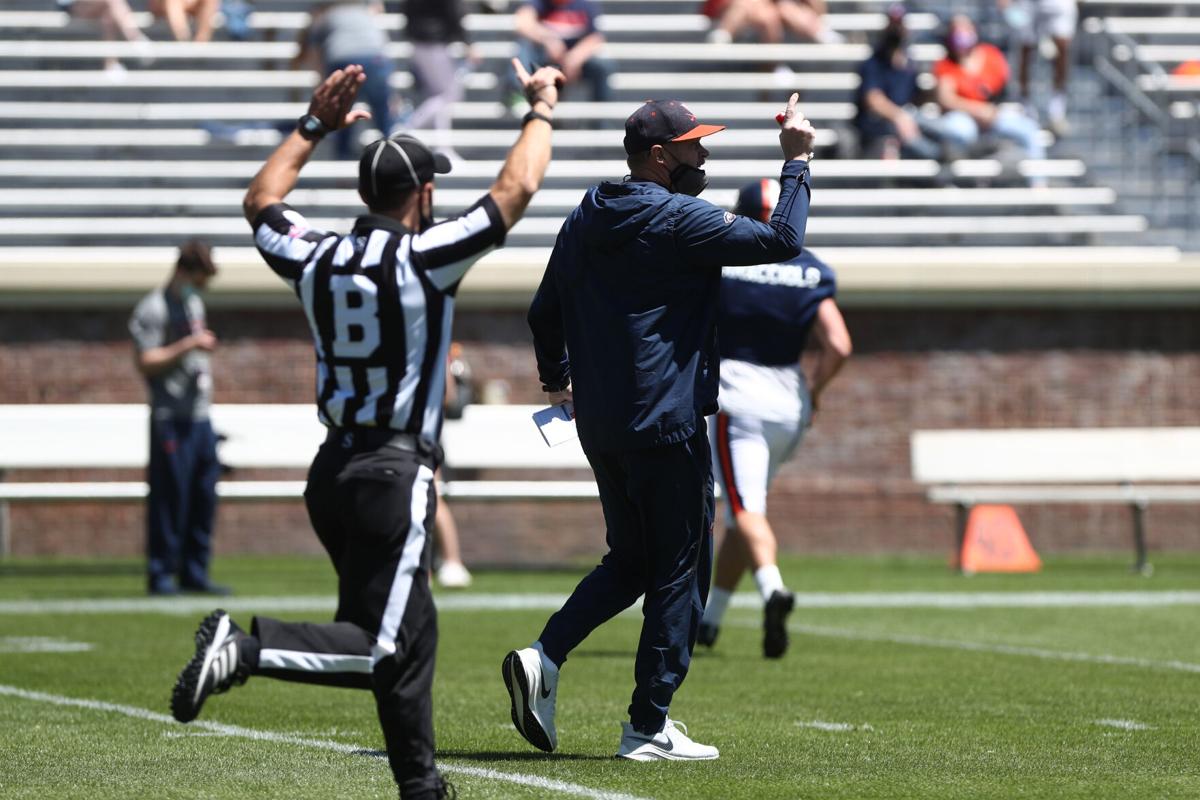 The Virginia football team’s spring game on Saturday felt like a step toward normalcy.

A “sellout” crowd of 5,000 fans attended. The program, which prides itself on development, just completed an important few months of practice that it missed out on last year. With hope of putting the pandemic in the rearview mirror, the attention Saturday at Scott Stadium seemed almost fully shifted toward football.

“We have a Coastal championship to defend,” Virginia coach Bronco Mendenhall shouted into a microphone before the game.

With no divisions in the ACC last fall, the Cavaliers remain the defending ACC Coastal Division champions despite a 4-5 conference record in 2020. They’ll attempt to win the division this fall with a solid group of returning contributors.

Junior Brennan Armstrong returns at quarterback, and he performed well in Saturday’s spring game. He connected frequently with sophomore wide receiver Dontayvion Wicks, who UVa made a point to find in the passing game after he missed the 2020 season with a foot injury.

Wicks made that goal easy on Armstrong as he often burned cornerbacks with smooth route running and speed. The dazzling routes and effortless speed thrilled the UVa fans in attendance.

“It was real fun to come out and see fans surrounded and cheering on every catch I make,” Wicks said.

With sophomore star Lavel Davis Jr. out for at least most of the fall, the Cavaliers need Wicks’ production.

Alongside Wicks is senior offensive weapon Keytaon Thompson. The former Mississippi State transfer plans to build on a 2020 campaign in which he averaged 7.3 yards per touch. He caught a handful of balls Saturday and is expected to be used all over UVa’s offense in the fall.

Senior Ra’Shaun Henry, who had an impressive spring, was unavailable Saturday for an undisclosed reason. Mendenhall wasn’t overly concerned by his absence.

“He just wasn’t available, but he was, going into this spring game, our most productive receiver of the spring,” Mendenhall said. “We really like how he’s developed.”

UVa also used the spring to develop its running backs as the program searches for a reliable rushing attack outside the quarterback position. Senior Wayne Taulapapa, the most experienced of the group, was essentially given Saturday’s scrimmage portion off so the Cavaliers could work out their other three primary backs.

Senior Ronnie Walker Jr., an Indiana transfer, and sophomore Mike Hollins, a 2020 opt out, were given ample touches. True freshman Amaad Foston, who Mendenhall says is the best receiving option at the position, also worked into the mix.

“I think we can be the best offense in the ACC,” Armstrong said.

“In the tackle period, most of those players didn’t play, as we were focusing kind of on more of an opportunity scrimmage to get some final evaluations on some of our depth players,” Mendenhall said.

UVa’s defense, especially within the front seven’s second unit, remains a work in progress heading into the fall. Mendenhall stressed the need for increased “violence” as the team moves toward fall. Junior linebacker Nick Jackson, the team’s leading tackler in 2020, agrees with his coach and also thinks the defense is coming along well.

“I think that there’s always room for improvement for violence,” Jackson said. “You can always be more violent. You can always hit harder. You can always do everything more deliberate, but I think … we’ve made strides from just pad level and just assignments and playing football the way Virginia plays football.”

While the Cavaliers weren’t perfect Saturday, they showed good flashes. The offense boasts dynamic playmakers to go with an experienced offensive line, and the defense likes the projected group of starters.

With four months to go until the start of the fall season, there’s time left to grow and develop. By the time kickoff against William & Mary rolls around on Sept. 4, Virginia hopes Scott Stadium is packed to the brim.

The Wahoos inched closer to a full Scott Stadium on Saturday, but plenty of seats were left unfilled. Mendenhall noted that the ticket allotment — which was capped at 5,000 — sold out. There’s an appetite to watch the defending ACC Coastal Division champions, and Mendenhall is working to keep his program at the top of the division.

He’s hopeful the community will be there to watch them try.

“It’s just more fun,” Mendenhall said. “I would love to say it’s the same with or without, it’s not even close. It’s way more fun when we have a Scott Stadium environment and a true fourth side.”

Virginia players celebrate after a score during the final UVa spring football practice on Saturday at Scott Stadium.