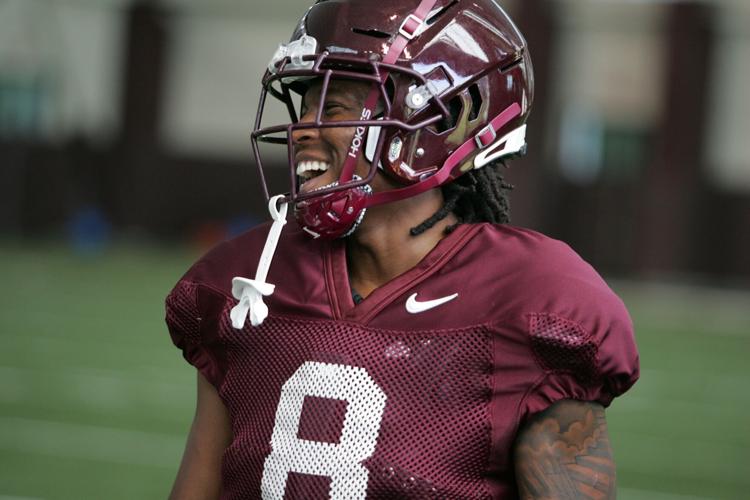 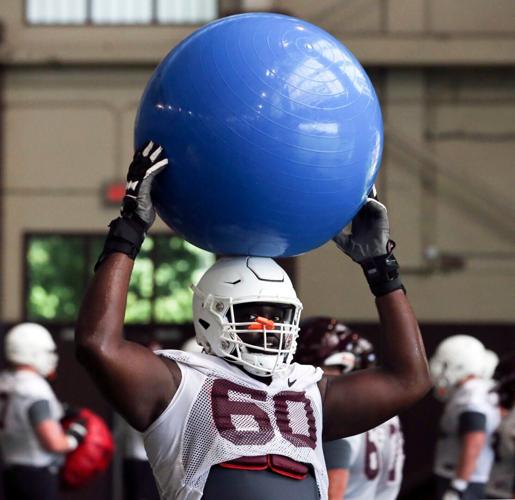 “He works his tail off. He’s the first one in the building, the last one out every day,” said Hollifield. “And like, my opinion? He didn’t get what he deserved in years past.”

All across the Tech roster, the arrival of a new coaching staff, led by Pry, has given players a fresh start — a second chance to make a first impression. Perhaps no Hokies are benefitting more from that than Murray and Dzansi.

“It’s something that’s helped me out a lot and kind of rejuvenated my confidence,” said Murray, who is competing with senior Armani Chatman for a starting position. “It definitely feels good when your hard work is not going unnoticed. It definitely gives me that extra edge, lets me know that I’m going to get something out of it.”

Murray transferred to Virginia Tech from Coffeyville Community College after the 2018 season and has seen his playing time fluctuate year to year under the former staff. He played in 11 games as a backup and special teamer his first season at Tech, then got the start in the team’s Belk Bowl appearance. He intercepted a pass in that loss to Kentucky.

The next year, he started eight of nine games for the Hokies, intercepting passes against North Carolina State and Boston College.

But last season, he played sparingly, seeing time as a backup in 11 games. His fluctuating playing time wasn’t always easy to swallow, he said.

“I think when you’re going through that, it’s kind of hard,” said Murray. “My confidence was definitely up and down and my mentality was messed up and sideways.”

That’s certainly something Dzansi can relate to.

As a redshirt freshman in 2018, he started his first collegiate game at left tackle in a road loss to Old Dominion. He ended that campaign starting the final three games at right tackle. Over the next three seasons, he bounced in and out of and all around the Hokies’ lineup, playing both tackle and both guard spots.

“I really tried to roll with it,” said Dzansi, who was part of a 24-23 showing by Tech the past four seasons under Justin Fuente. “It wasn’t easy. From being a starter, to not being a starter, being a guy who was considered a captain to not, it was definitely frustrating. I just tried to keep my head high.”

Pry said it didn’t take long to peg Dzansi as the team’s left tackle, an assessment Rudolph reached on his own, as well. From there, the task was getting Dzansi to agree to play another season at Tech.

“That was our biggest recruiting task. Getting him to stay was big,” said Pry. “I think he can be as good as anybody we have on our football team at their position. … He’s a tremendous athlete with great feet for his size. You just don’t see that. And he’s smart and experienced and mature.”

For Dzansi, feeling valued that highly by the new coaching staff made his decision to return for a final year an easy one.

“When they came in, everyone had a fresh start,” said Dzansi, who will anchor a line that returns three starters from last season. “The fact that they saw me as a leader on this team and as a guy who could be a starter, hopefully, it’s been a blessing. It’s definitely rejuvenating.”

Owner Robert Kraft paid for the Virginia team’s flights to and from South Florida.

No. 3 UVa acted like one of the country’s most-seasoned and skilled teams, who had experienced moments and environments of magnitude and hostility before, in its 70-68 win over Michigan.

The Virginia women's basketball team pulls away from East Carolina to improve to 8-0 for the first time since the 1992-93 season.

The 2023 Virginia Sports Hall of Fame class has a strong Central Virginia flavor.

For all the scoring Camryn Taylor did Saturday, the most critical play she made came on the defense, and the tenacity she showed in doing so ensured UVa remained unbeaten.

Teel: Tony Bennett isn't sure there's an elite college basketball team this season, but he may have one at Virginia

Tony Bennett isn't sure there's an elite team in men's college basketball this season, but the numbers show that he may have one at Virginia, writes David Teel.

Study: Caffeine can improve the performance of sprint runners

Study: Caffeine can improve the performance of sprint runners