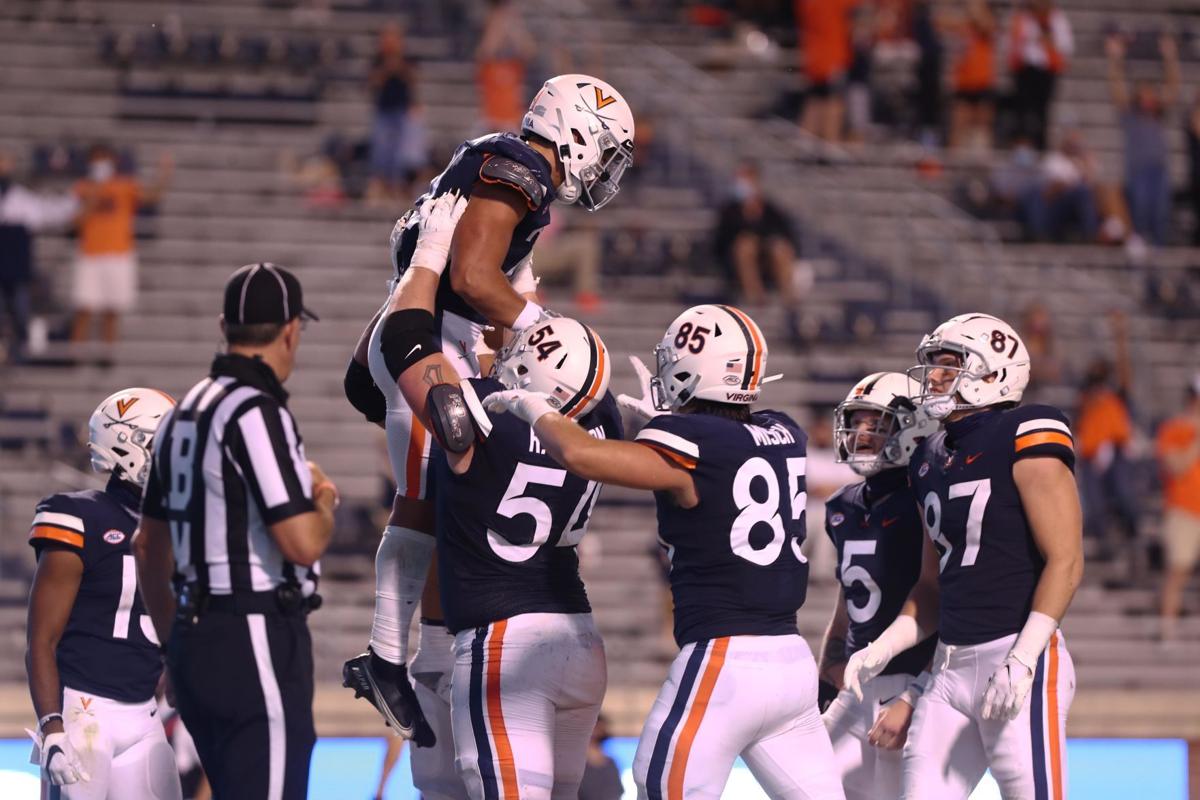 Virginia football players celebrate a touchdown during the first game of the season against Duke at Scott Stadium. 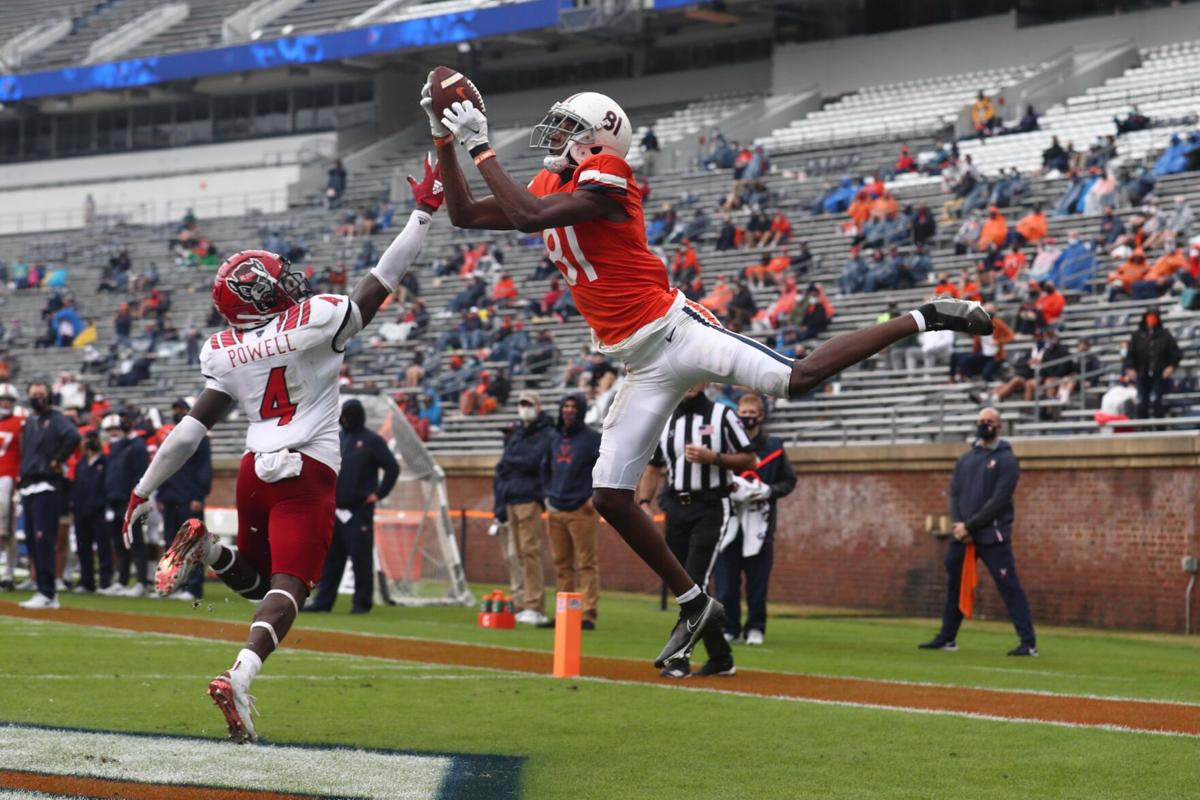 The Virginia football team’s upset victory over North Carolina re-energized fans, giving them hope for a strong finish to the season after a 1-4 start.

The Cavaliers sit at 2-4 overall and in the ACC, waiting to play on Nov. 14 after positive COVID-19 tests within Louisville’s program delayed the team’s Nov. 7 contest with the Cardinals. Both sides are hopeful they can play.

UVa hopes it can build on the momentum generated in the upset victory over the Tar Heels. With Louisville, Abilene Christian, Florida State, Boston College and Virginia Tech left on the schedule, there’s potential for the Cavaliers to finish the regular season with a winning record.

Through the first half of its season, Virginia has been inconsistent. The Cavaliers performed admirably against Clemson, Miami and North Carolina, but dropped games to N.C. State and Wake Forest by 17 points apiece.

Bronco Mendenhall’s team, despite inconsistent stretches, believes in itself. The Cavaliers haven’t performed up to their standards consistently, but they’ve shown flashes of being a top-5 ACC team.

Let’s take a closer look at UVa’s grades through six games this fall.

UVa’s offense grades out at slightly above average. Several times this fall, the Virginia offense looked like a top-tier ACC unit, including in the team’s 44-point showing against North Carolina.

Other times, like the middle of the Miami loss and for much of the N.C. State game, the Cavaliers’ offense showed significant need for development. With quarterback Bryce Perkins and wide receivers Hasise Dubois and Joe Reed gone, the need for development makes sense.

When Brennan Armstrong is healthy, UVa’s offense looks decent, though. The first year-starter gives the Cavaliers a passing and running threat when he’s on the field.

“I thought he played an amazing game and that’s just the beginning,” Mendenhall said after the win over UNC. “As we saw from the Duke game to the Clemson game when he had a chance to go back-to-back, now you see Miami to this game back-to-back. He has such an amazing future in running and throwing and leading.”

The Cavaliers are averaging 27.3 points per game and 412.7 yards per contest, although Armstrong missed the second half against N.C. State and the entire contest against Wake Forest. Both the scoring and yardage marks are respectable, but the Cavaliers would certainly like more consistent production on the scoreboard. At times this fall, yards have not translated into touchdowns.

Third-down conversions remain a key area for improvement entering the final stretch this fall as well. Virginia converts just 31.6% of its third-down attempts. Fortunately for the Wahoos, a 14-for-20 mark on fourth down helps mask some of the third-down shortcomings.

A lead tailback would also prove valuable as the season winds down. Wayne Taulapapa leads the team’s rushers with 330 yards on the ground, averaging 4.6 yards per carry. Shane Simpson rattled off 70 rushing yards in the win over North Carolina, and he sits at 178 rushing yards on the season on 31 attempts.

Using quarterbacks Iraken Armstead and Keytaon Thompson adds a dynamic dimension to the rushing attack. Armstead will miss the rest of the fall with injury, but Thompson figures to see significant usage the rest of the way.

Thompson lined up at quarterback, running back and wide receiver against the Tar Heels.

Indiana transfer Ronnie Walker Jr. is expected to be available when the Cavaliers next play, potentially giving UVa a third running back threat. Armstrong leads the team in carries and he’s taken a handful of big hits this fall. He left the N.C. State and UNC games with injuries and missed the Wake Forest contest.

Increased production from running backs would take the pressure off Armstrong to perform on the ground, helping him avoid hits in the running game.

While the Cavaliers want better performance from running backs, the offense averages 171.7 rushing yards per contest. That’s a decent number for the Wahoos, and the offensive line deserves credit for being solid all season long.

Entering the fall, UVa’s defense seemed like the cornerstone of this year’s team. Instead, the Cavaliers are allowing an average of 33 points per contest. That falls below the team’s standard and expectations.

Clemson, North Carolina and Wake Forest all reached or surpassed 40 points against the Wahoos. The offense possessed enough firepower to beat North Carolina. Even so, the Cavaliers allowed 443 passing yards to the Tar Heels.

“What has to improve is you have to win the one-on-one matchups,” defensive coordinator Nick Howell said.

In fairness to the defense and the secondary, injuries have played a role in the lack of consistency. Safeties Joey Blount and Brenton Nelson suffered injuries early in the season, and they’ve both missed the games against Miami and North Carolina.

On the other hand, N.C. State eclipsed 30 points against the Wahoos and allowing big plays has been an issue for the secondary all fall, even when fully healthy. UVa’s defense needs improvement, especially in the back end.

Defensive line play will be a challenge the rest of the way with Richard Burney out for the season with a health issue. Experienced depth at the defensive line spot is minimal.

Charles Snowden has tallied five sacks in the past two games, providing important production at the outside linebacker position. With the defensive line not creating a ton of pressure, Snowden’s athleticism off the edge provides a valuable spark for the Wahoos.

“He’s got havoc written all over him,” linebacker Nick Jackson said of Snowden.

There’s potential for Snowden and the Cavaliers to finish the final games of the regular season strong. That depends on limiting big plays and returning to full health.

Virginia’s fall season started with a fumbled kickoff return. The Cavaliers gave up a long opening kickoff return in its second game of the fall. They fumbled another kickoff in their loss to Wake Forest.

“I think our special teams have been poor, collectively,” Mendenhall said in early October.

Virginia used a fake punt in its win over UNC to seal the game late. The play marked the second successful fake punt of the fall. Earlier this season, a Nash Griffin pass helped set up a touchdown in the N.C. State loss.

Griffin offers consistency, averaging 43.5 yards per punt. Seven of his 27 punts were downed inside the opposing team’s 20-yard line, and eight of his punts traveled at least 50 yards.

Brian Delaney sits at 6-for-8 on field goal attempts this fall. He’s been decent for UVa. Justin Duenkel took over kickoff duties for Delaney, showcasing a strong leg capable of creating touchbacks. Unfortunately for the Wahoos, they’ve knocked four kickoffs out of bounds, with two coming from Delaney and two from Duenkel.

UVa averages 8.6 yards per punt return and 20.9 yards per kickoff return. There’s need for more production out of the return game, and the unit has seen a dramatic decline after years of Joe Reed owning the role.

Overall, UVa’s special teams play has been slightly below average. Key plays in recent weeks help the Cavaliers earn a grade above a D.

A few sloppy execution mistakes from the Wahoos keep the coaches from earning an A, but they deserve credit for the performance this fall. Yes, the Cavaliers sit at 2-4 overall on the season and they lost winnable games to N.C. State and Wake Forest.

On the flip side, the Virginia players clearly believe in Mendenhall and UVa’s culture. Every player who spoke to the media after the team’s sluggish start stressed the same things.

They believed they needed to execute better, but they also believed they were better than their 1-4 record indicated. With the win over North Carolina and an easier schedule in the second half of the season, the Cavaliers can still salvage a winning season despite playing during a pandemic and breaking in a new starting quarterback.

“Every team that we played this year, I think we could’ve [beaten],” offensive lineman Chris Glaser said before facing UNC.

Glaser went on to add that “just because their ranked, it doesn’t matter to me.”

Despite a 1-4 record, UVa believed it could beat a top-15 team. The belief ultimately resulted in a victory.

The overall fall record makes UVa fans frustrated — and it should — but the belief within the team that the season isn’t lost is a direct result of the culture created by Mendenhall and his coaching staff.

It’s up to the Cavaliers to execute more consistently in all three phases to turn the potential of a winning season into reality.

Virginia football players celebrate a touchdown during the first game of the season against Duke at Scott Stadium.