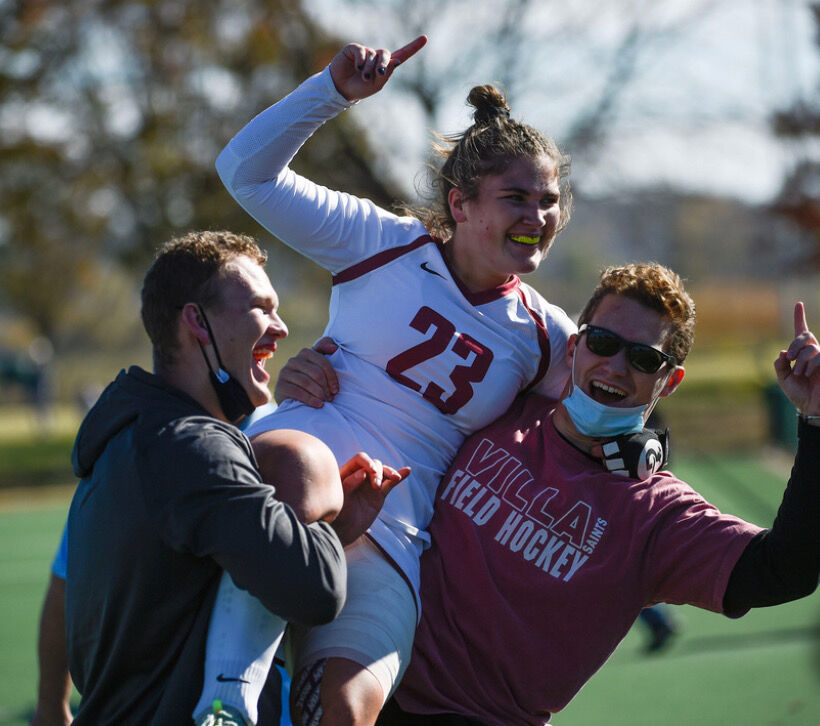 Taryn Tkachuk, center, celebrates with her brothers Brady and Matthew after scoring the game-winning goal for her high school, Villa Duchesne, in the Missouri state championship game last season. Taryn Tkachuk will be a freshman on the Virginia field hockey team this season. 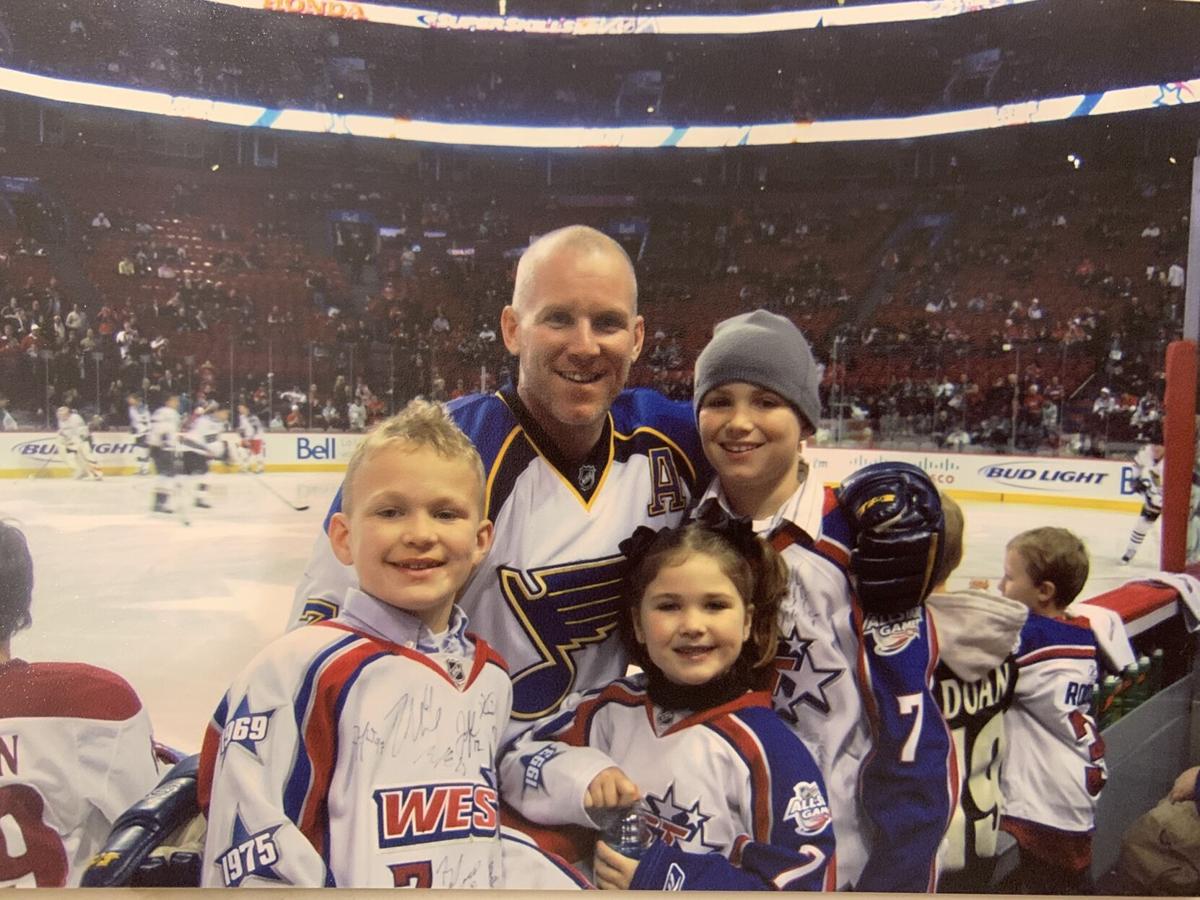 Taryn Tkachuk, front center, comes from a family of standout hockey players. Her father, Keith, top center, was a five-time NHL All-Star and four-time Olympian and her brothers Matthew and Brady were both top 10 picks in the NHL Draft.

Soon after scoring the game-winning goal to give her high school field hockey team its third Missouri state championship in four years, Taryn Tkachuk was lifted into the air by the broad shoulders of her brothers.

In a family of exceptional athletes, it can be hard to stand out, but the UVa field hockey signee captivated those in attendance on Oct. 31. Her game-winning overtime goal, which came on her birthday, thrilled a family of NHL standouts.

“That’s something I’ll never forget,” Brady Tkachuk said. “That’s a memory that for our family it’s really important and dear to us. That was such a great moment for us.”

Brady currently plays for the Ottawa Senators and was the No. 4 overall pick in the 2018 NHL Draft. His older brother, Matthew, plays for the Calgary Flames and was selected No. 6 overall in the 2016 draft. Their father, Keith, was a five-time NHL All-Star and four-time Olympian. He played in the NHL from 1992-2010.

Even with a rich history of athletic achievements, Taryn’s final high school field hockey game made an impact on the Tkachuks.

Typically, Brady and Matthew can’t watch much of Taryn’s season because they’re dealing with NHL responsibilities. With the NHL season’s start date altered due to COVID-19, the entire family was able to watch Taryn in the fall of 2020.

“That was one of our favorite days, not only of the break being home, but honestly of our lives,” Matthew said.

It meant something to Taryn, too.

She felt increased internal pressure with her brothers in the stands. She delivered under the spotlight with the only goal of the game, as her squad won 1-0.

“My high school has been in the state championship every year,” Taryn said. “We’ve won three out of four, but they’ve never been there to experience that, and I just wanted to be able to share that with my family. I was going to do everything to win that one.”

While Brady, Keith and Matthew boast impressive athletic accolades and ability, the two brothers are quick to praise Taryn’s talents. Whether it was soccer, hockey or a trampoline game the siblings made up, Taryn’s athleticism shined throughout childhood.

She didn’t pick up field hockey until about seventh grade, but she blossomed into a star in Missouri. Before playing field hockey, she played a handful of sports with her brothers and played quite a bit of soccer. Feeling burned out around seventh grade, she made the switch to field hockey.

“My mom was like, ‘Well, you’ve got to pick another sport, you’re not just gonna sit around and do nothing,’” Taryn said. “A bunch of my school friends were playing field hockey in seventh grade, and I just started playing for my school and started loving it.”

Her ability, which became evident quite quickly, led to Division I interest and a scholarship offer and commitment to UVa. Taryn was her high school conference’s player of the year in all four of her high school seasons. She also led the state of Missouri in goals and points all four seasons.

“She just has that natural athletic gene,” Matthew said. “I like to say we all do in the family, but hers is another level.”

Taryn acknowledges that she’s able to go from sport to sport effectively, but whatever natural athleticism she holds is aided by a relentless work ethic.

“I wouldn’t say it came naturally,” Taryn said. “It came with a lot of practice.”

Her athletic gifts developed during childhood as she competed against two highly athletic and competitive brothers. Her older brothers were willing to let her play sports with them growing up, on one condition.

They wouldn’t go easy on Taryn.

“She’s probably the toughest because she had to deal with a lot growing up,” Brady said.

Matthew remembers summer Wiffle ball games at his family’s Cape Cod house. Every weekend people would gather to play in their backyard, having fun but playing with a desire to win. Taryn played under the same rules that Matthew and Brady’s friends would follow.

“It’s probably not good to say it, but when she was young we’d play exactly like we played with our buddies,” Matthew said. “We chucked the ball at her and if it hit her, she’s out. We definitely toughened her up.”

Competing in a wide range of sports against her brothers taught Taryn what it takes to have success. She says it also shaped her field hockey playing style. She laughed when describing her physical nature of play, mentioning that sometimes she has to dial it back to avoid fouls.

A fiery competitor with elite athletic gifts, Tkachuk is one of the top prospects in the country. She’s excited to develop more at UVa, citing a desire to work on skills for the sport she only picked up a handful of years ago.

Taryn will arrive to Virginia this weekend for her physical, and she’ll soon take part in the team’s preseason camp before embarking on her first collegiate season.

She knows the battles with her brothers will serve her well the rest of her career.

Taryn Tkachuk, center, celebrates with her brothers Brady and Matthew after scoring the game-winning goal for her high school, Villa Duchesne, in the Missouri state championship game last season. Taryn Tkachuk will be a freshman on the Virginia field hockey team this season.

Taryn Tkachuk, front center, comes from a family of standout hockey players. Her father, Keith, top center, was a five-time NHL All-Star and four-time Olympian and her brothers Matthew and Brady were both top 10 picks in the NHL Draft.