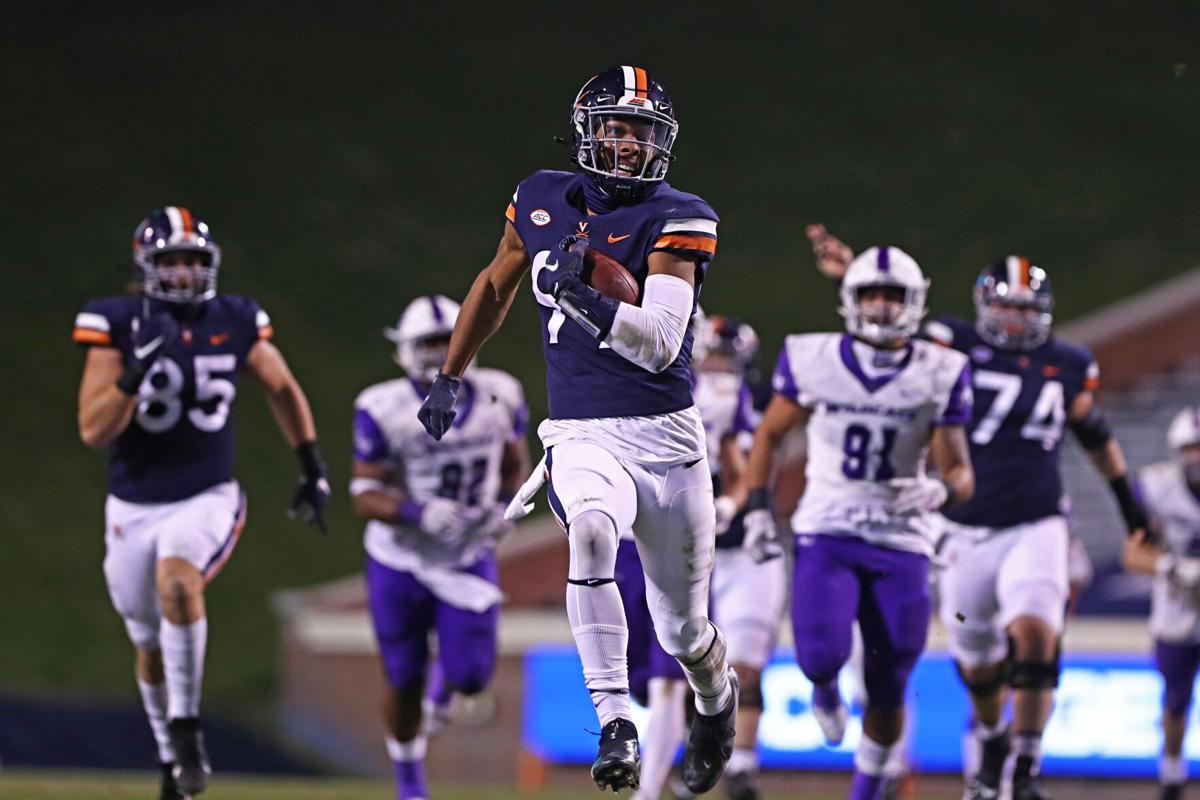 Virginia quarterback Keytaon Thompson runs for a touchdown against Abilene on Saturday at Scott Stadium. 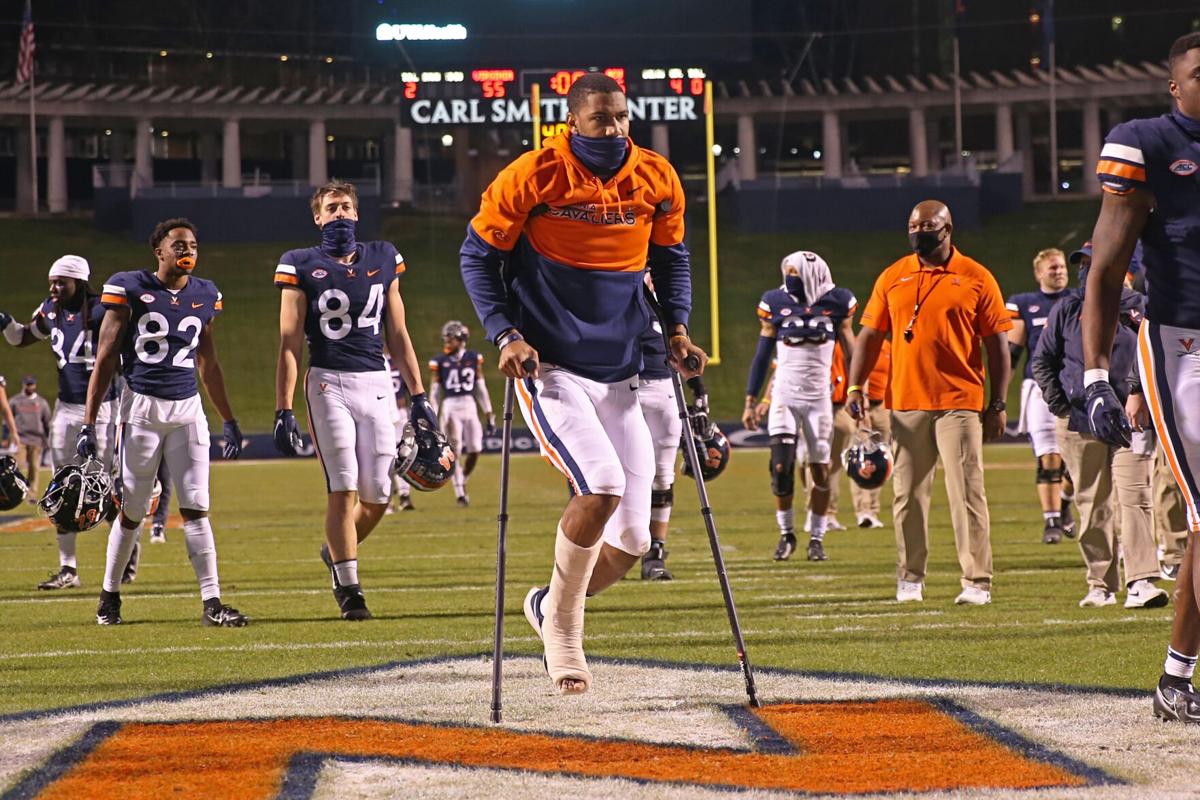 Virginia linebacker Charles Snowden heads off the field on crutches after the Cavaliers' 55-15 victory over Abilene Christian on Saturday at Scott Stadium.

Unfortunately for the Wahoos (4-4, 3-4 ACC), costly injuries appeared throughout the victory.

Cornerback Nick Grant went down on the team’s first defensive series. He later returned, but the biggest blow came a couple plays later when star linebacker Charles Snowden went down with a right leg injury. As he lay on the field long after the whistle blew, he took his helmet off and slammed it on the turf in frustration.

“It’s always hard to see players get hurt,” UVa head coach Bronco Mendenhall said. “I hate that part of the business and this job, especially the players that I have such good relationships with and just admire.”

Mendenhall declined to provide official updates on anyone’s health immediately after the game.

Trainers helped Snowden off the field as he avoided putting any pressure on his leg. He immediately headed toward the locker room.

He returned to the sideline in the second half wearing a sweatshirt and what looked like a cast on his right leg. He sat on a training table for the final half, chatting with teammates who stopped by to share words of encouragement.

Later in the first half, Lavel Davis Jr. fell hard and missed a few plays. Fortunately for UVa, Davis Jr. returned, but the Cavaliers’ bad injury luck wasn’t quite done.

After speaking with trainers, Malani went to the locker room.

While injuries might keep Mendenhall up at night, Virginia’s on-field performance should put him at ease.

The Cavaliers opened the scoring with a 28-yard yard touchdown pass to Tony Poljan. On the final play of the first quarter, Virginia extended its lead to 14-0 on a 90-yard touchdown strike from Armstrong to Davis Jr. The 6-foot-7 wide receiver caught the ball around midfield before galloping by the defender trying to catch him from behind.

“We saw it once in fall camp this year, and we were like, ‘Oh wow, he’s got some speed,’” Armstrong said. “When he caught it, I didn’t know where the corner was to get him, but I was like he might be gone, and he was.”

Virginia took a 28-7 lead into halftime thanks in part to a pair of Shane Simpson one-yard rushing touchdowns, including one as the clock expired to end the first half.

Abilene Christian found the end zone on a two-yard pass from Stone Earle to Kobe Clark. The touchdown drive continued thanks to a D’Angelo Amos interception return for a touchdown being overturned due to a questionable pass interference call. Abilene Christian took advantage of the penalty, marching down the field to cut the deficit to 21-7 before Virginia quickly answered with Simpson’s second score.

The UVa lead quickly grew in the opening moments of the second half, as the Wahoos ran a quick toss play to Keytaon Thompson, who turned the short pass into a 56-yard touchdown. Two minutes later, Thompson took the ball, rolled left and flipped it to Armstrong who then launched a 52-yard touchdown pass to Ra’Shaun Henry on a trick play that fooled the Wildcats.

With the touchdown, Henry maintained his trend of only catching touchdowns for Virginia. All three of his catches since joining the Wahoos as a graduate transfer have gone for touchdowns. Saturday’s score put UVa up 42-7 with 9:06 left in the third quarter.

As the lead grew, so did the list of injuries.

Amos went down on a special teams play, slowly leaving the field and not returning to the game. He favored his right leg as he limped off the field.

UVa avoided other devastating injuries as it quickly turned to players well down the depth chart to close out the game. The Cavaliers added their final offensive score on a two-yard pass from Lindell Stone to freshman wide receiver Demick Starling.

Abilene Christian added a final garbage time touchdown on a rushing touchdown from backup quarterback Peyton Mansell. After the score — perhaps wanting to celebrate their final offensive score in the final game of their fall season — one Wildcat rolled the football at his teammates who then fell down as they pretending to be bowling pins. An unsportsmanlike conduct penalty moved the extra point back, which was then hooked wide left.

A few plays later, Virginia inexplicably ran a trick play from its goal line that resulted in a safety to give the Wildcats two final points. Offensive coordinator Robert Anae accidentally called the double-pass as the Cavaliers wanted to run out the clock.

“It was a complete accident,” Mendenhall laughed. “It was like, what the crap just happened?”

As time expired, UVa’s D’Sean Perry returned an interception 84 yards for the Cavaliers to cover the 39.5-point betting spread and win 55-15.

Crazy finish aside, when the Cavaliers wake up Sunday morning, they’ll sit at .500 on the year, riding a three-game winning streak. They’ll also need to craft a plan to sustain success as the team’s depth dwindles due to critical injuries.

“You definitely feel for the guys,” linebacker Nick Jackson said. “They’re your brothers, and you want to play for them, so you just come out and play for them. Do what they would do for you.”

The Virginia men's basketball team bounced back from a disappointing loss to San Francisco with a dominant victory over Saint Francis on Tuesday in a nearly empty John Paul Jones Arena.

After falling to unranked San Francisco on Friday, the Virginia men’s basketball team’s wait to return to the floor ends Tuesday evening, when the Cavaliers (1-1) host Saint Francis (1-1).

Virginia quarterback Keytaon Thompson runs for a touchdown against Abilene on Saturday at Scott Stadium.

Virginia linebacker Charles Snowden heads off the field on crutches after the Cavaliers' 55-15 victory over Abilene Christian on Saturday at Scott Stadium.