Virginia basketball notebook: With no fans, Cavaliers bring their own noise
0 comments
Share this
{{featured_button_text}}
1 of 2

Virginia coach Tony Bennett claps for the team during the second half against Notre Dame on Wednesday in South Bend, Ind. Virginia won 66-57. 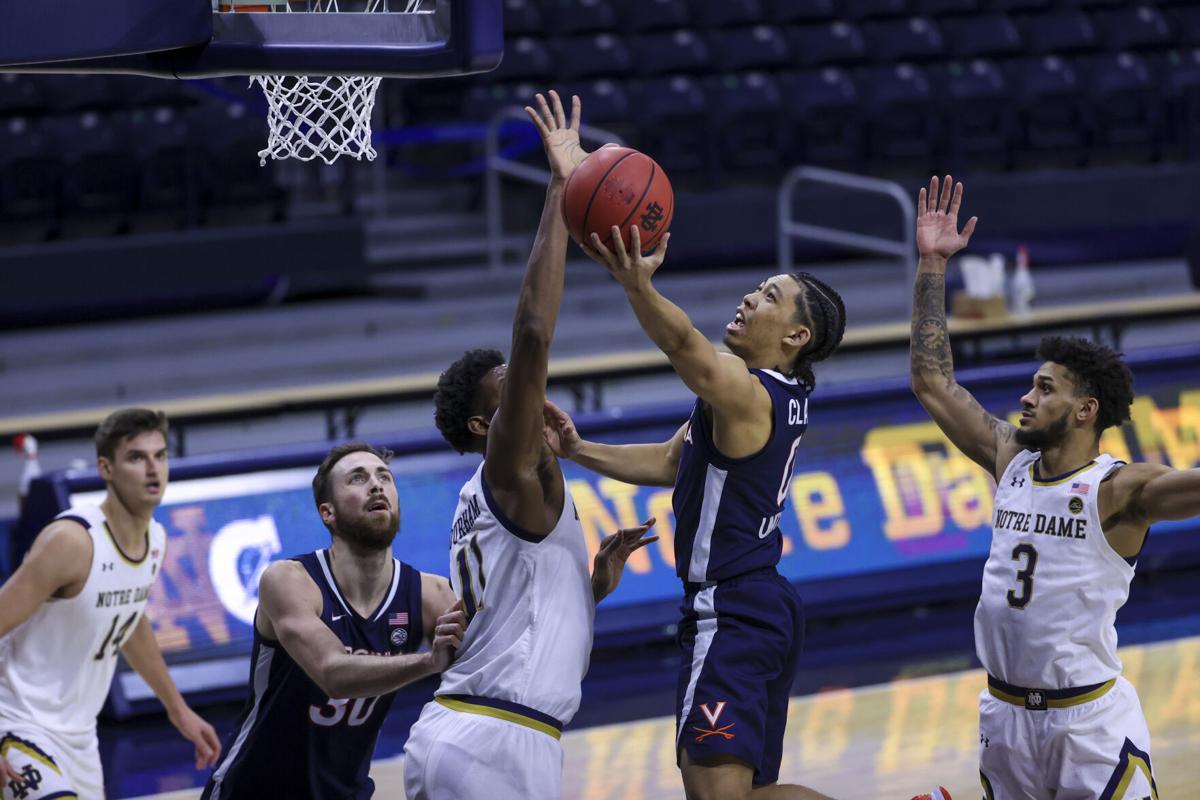 Virginia guard Kehei Clark goes up for a shot against Notre Dame on Wednesday in South Bend, Ind. Clark finished with 19 points in the Cavaliers’ 66-57 win.

For many college basketball fans, watching games on TV this season has required an auditory adjustment.

With games being played in near-empty arenas due to the COVID-19 pandemic, the usual sounds of cheering fans and loud bands have been replaced by eerie silence, the squeaking of shoes and coaches calling out assignments to their players.

But on Wednesday night, Virginia fans heard a familiar chant resonating from Purcell Pavilion through their TV sets.

With no UVa fans able to make the trip to South Bend due to COVID-19 restrictions, the Cavaliers decided to create their own cheering section. Players that were not in the game provided some of that missing fan energy from the bench with clapping, cheers and chants.

“It’s good you could hear the cheers,” Virginia forward Sam Hauser said after Wednesday’s win, “because Coach challenged us on that one today.”

As his team kicked off conference play, Virginia coach Tony Bennett turned to his players help generate some of the missing fan energy from the bench. Part of that plan was figuring out what cheers the players could do during the game.

“We practiced a couple cheers, put it that way,” Bennett said with a smile. “We went old school. I asked the guys, ‘What were some of your best chants when you were in AAU or high school?’”

One of the chants the Cavaliers decided to use was the tried and true “De-fense.”

“Obviously the ‘De-fense’ chant, everyone knows that one,” Bennett said.

While he challenged the entire team to be more vocal while on the bench, Bennett said he is looking to walk-ons Chase Coleman, Jayden Nixon and Austin Katstra, who rarely see playing time, to lead the cheering charge. The Cavaliers’ bench has been lively in seasons past, but their role as energy boosters has taken on an added significance during this pandemic-altered season.

“As you look around college basketball, this is unlike anything [we’ve seen] in terms of atmosphere and what it’s like,” Bennett said, “so you have to try to get some of that.”

Much like the Virginia football team tried to generate sideline excitement with “The 4th side” during the fall, the Cavaliers’ men’s basketball team will try to generate that same jolt as it navigates ACC play this winter.

“Not having fans there, sometimes you feed off of their enthusiasm and their cheering, but … our bench came together and started some chants,” Hauser said. “That’s where the energy is going to have to come from throughout this whole year.”

At 5-foot-9, Kihei Clark is the shortest player on Virginia’s roster, but the junior point guard showed off his post prowess late in Wednesday’s win over Notre Dame.

With 2:55 to go and the Cavaliers leading 57-53, Clark posted up Notre Dame guard Cormac Ryan, who is 6-5. Despite being half a foot shorter than his defender, Clark attacked the rim and scored on a left-handed lay-up as he was fouled by Ryan. Clark hit the ensuing free throw to complete the three-point play and give Virginia a seven-point lead.

“I was just trying to pick my spots in the offense,” Clark said. “When we’re in [the] three-game [offensive set], we got two guys on the wing and me. Sam [Hauser] and Jay [Huff] are moving around. You can get catches anywhere in the middle, whether it’s up top or in the post. Once I get in a post, I just take my time and I’m just trying to work on it. We work on it a lot in practice, something that we worked on in the past, so we call it the playmaker spot.”

Clark shined in the playmaker spot Wednesday night, finishing with a team-high 19 points and five assists. The junior has led Virginia in scoring in each of the past two games.

“He was aggressive,” Bennett said of Clark. “And at times we threw it to him in the post and he can make some plays, whether it’s for himself or create for others, so I like that.”

For the second straight game, Virginia forward Jay Huff saw his minutes limited due to foul trouble. After picking up four fouls in just 13 minutes of action against Gonzaga on Saturday, Huff played 24 minutes against Notre Dame on Wednesday. The senior picked up his fourth foul with 15:07 to go in the game, sending him to the bench for a good chunk of the second half.

Huff was effective offensively in his limited minutes Wednesday, finishing with 15 points on 7-of-9 shooting. But Bennett said he would like to see more from Huff — as well as Hauser — on the defensive end. That includes limiting fouls.

“Sam and Jay got to keep coming defensively,” Bennett said. “They got to shore up our defense better and be more alert. They did some wonderful things offensively. That was showing tonight and yeah, Jay got in foul trouble against Gonzaga and he did tonight, and other guys stepped up. Again, I think it comes down to just having an awareness and alertness, because it’s happened repeatedly, so that’s got to change. I want Sam and [Huff] to take a step defensively and they got to keep working.”

Dylan Mitchell has experienced a lot of team success during her time with the Western Albemarle girls basketball program.

Virginia coach Tony Bennett claps for the team during the second half against Notre Dame on Wednesday in South Bend, Ind. Virginia won 66-57.

Virginia guard Kehei Clark goes up for a shot against Notre Dame on Wednesday in South Bend, Ind. Clark finished with 19 points in the Cavaliers’ 66-57 win.