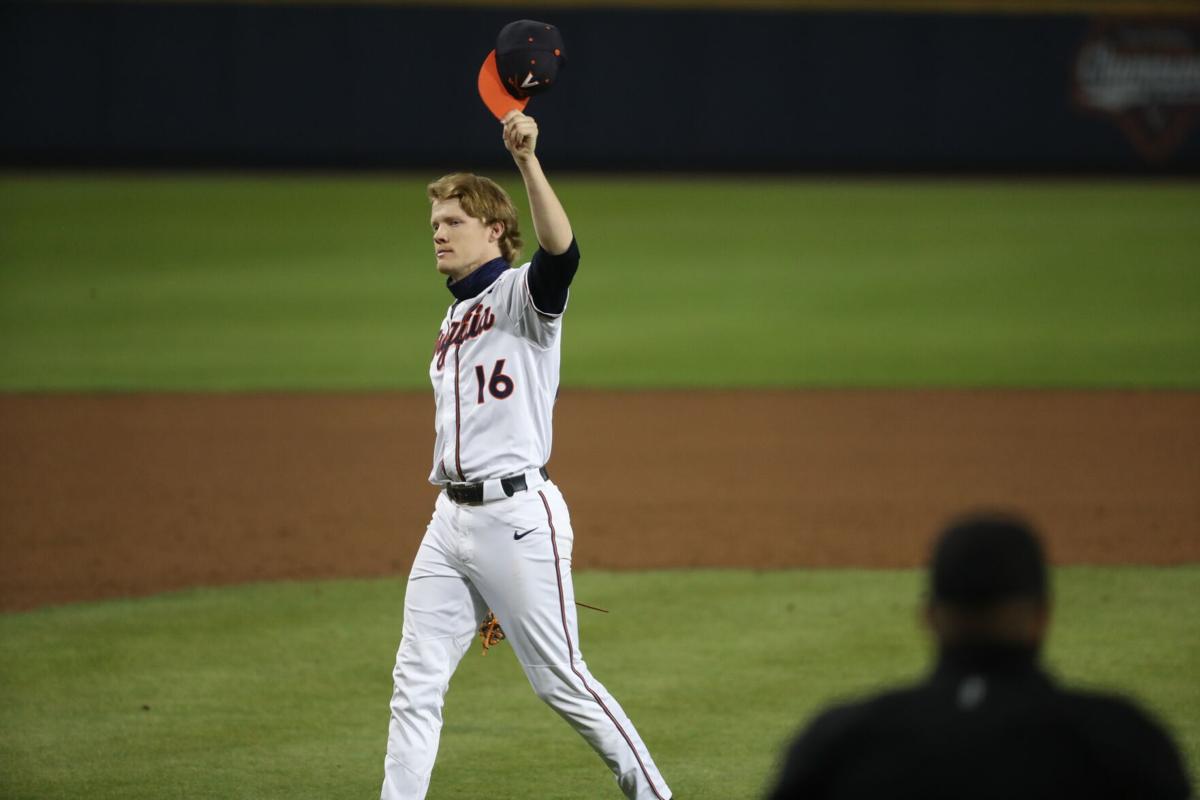 Abbott graced the Cavaliers, who are battling for a berth in the NCAA Tournament, with a historic pitching performance against Wake Forest in the final home start of his collegiate career. His offense backed him up with 17 runs.

“I’m just so proud of him” head coach Brian O’Connor said. “You wish there were 5,000 people in the stands.”

“I mean, what do you say?” O’Connor said. “Obviously, to be a part of a no-hitter is something that’s really, really special. The entire team, they’ll remember that for the rest of their lives, but those three pitchers that pitched in that game certainly will.”

“Emotional, definitely,” Abbott said. “It was hard to keep it back, guys giving me hugs and stuff on the mound.”

Abbott’s 16 strikeouts ties Seth Greisinger for the third-best single-game strikeout performance in program history. Only Nathan Kirby (18) and Harry Thomas (19) have ever had more in a game.

Two runs came across in the second inning on wild pitches from Wake Forest starting pitcher Ryan Cusick. Wake limited the damage, temporarily, by throwing out a runner at home to end the frame trailing just 2-0.

On the mound, Abbott fooled Wake Forest hitters. His first eight outs came via swinging strikeouts, as the Demon Deacons were unable to catch up to his fastball and struggled to make contact with his off-speed offerings.

He looked completely in command from the first batter he faced, pounding the strike zone and forcing the ACC team leader in home runs to put the ball in play. Wake failed that challenge.

Three runs came across in the fourth, including two on Brendan Rivoli’s first home run of the season. The senior outfielder launched a ball over the right field fence to give UVa a 5-0 edge. He finished the night 2-for-4 with two RBI.

Virginia added another four in the fifth, with two coming on a no-doubt home run from junior third baseman Zack Gelof. He demolished the ball, posing as it left the bat and slowly dropping the bat next to home plate as he jogged around the bases. Gelof went 2-for-4 with two RBI and three runs scored.

Leading 9-0 after five innings, the Cavaliers weren’t content. They added eight more runs in the sixth inning. Freshmen Jake Gelof and Kyle Teel were among the Wahoos with RBIs in the inning. Wake Forest pitchers struggled with command, walking in two runs with the bases loaded.

Sophomore Chris Newell recorded a three-run triple to center field, on what seemed like a routine fly ball. Wake Forest’s Lucas Costello lost the ball in the lights and it dropped, scoring three to put Virginia up 17-0 after six frames.

“As we move along here, we’re learning how to not just win a game, how to score in bunches and give ourselves a chance and some breathing room,” O’Connor said.

Abbott’s day ended after a strikeout to open the eighth inning. O’Connor told him his day would be done after seven innings, but Abbott requested a final batter so he could properly leave the mound and say goodbye to the home faithful.

He left the field to raucous applause from fans and his teammates. Abbott dazzled everyone in attendance, including the several MLB scouts, across his 105 pitches.

“Seeing the fans, standing ovation and stuff like that, it’s always hard to fight back tears,” Abbott said.

Berry and McGarry walked a couple, but the relievers kept the Demon Deacons hitless on a special night for Virginia baseball. McGarry, who was moved out of the weekend rotation earlier this spring for subpar performances, ended the night with a strikeout.

He recorded three strikeouts in the ninth, showcasing who he can be when he’s at his best.

“I’m glad that I was able to do that and help him achieve such a big thing,” McGarry said. “Wouldn’t have wanted to do that for anybody else.”

First pitch of the second game of the series is scheduled for 6 p.m. Saturday.

Key stat: The Virginia pitchers combined to throw a no-hitter.

Detroit Lions embrace being underdogs in 2021

The 2021 All Central Virginia baseball team.