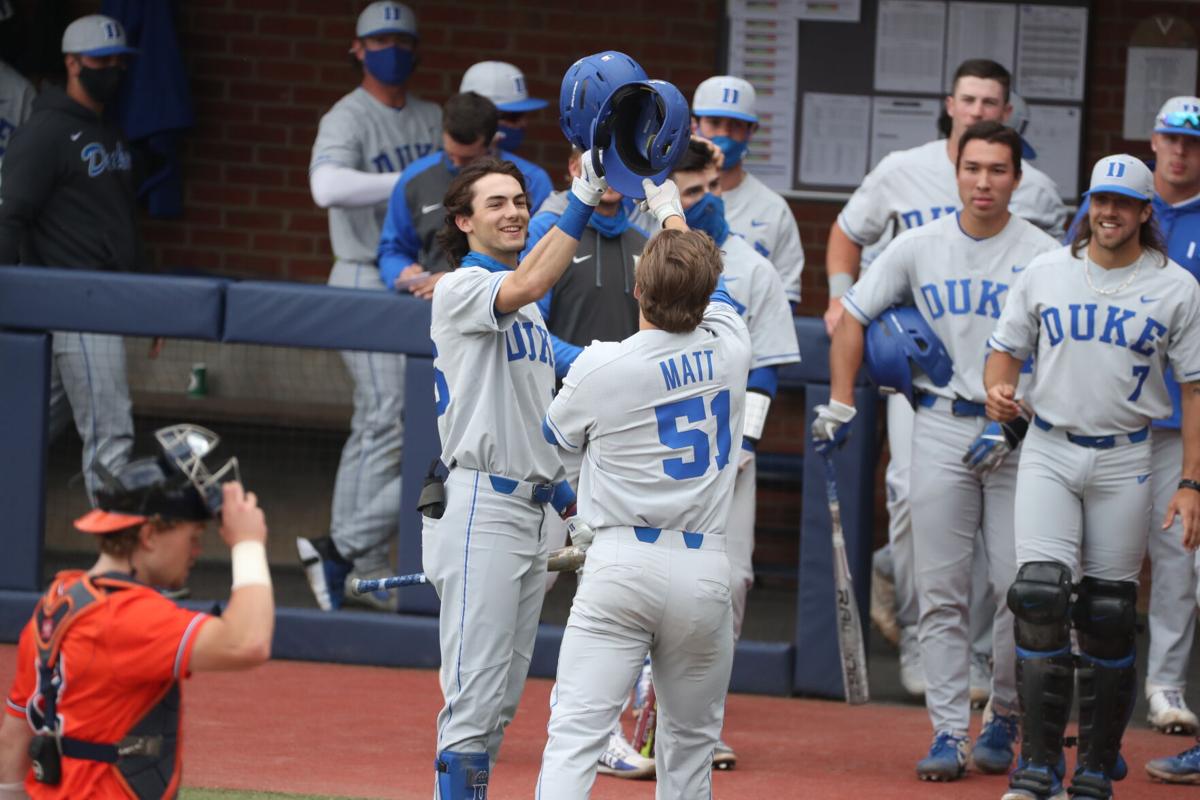 Duke’s Peter Matt, right, celebrates one of his two home runs against Virginia on Sunday at Disharoon Park. 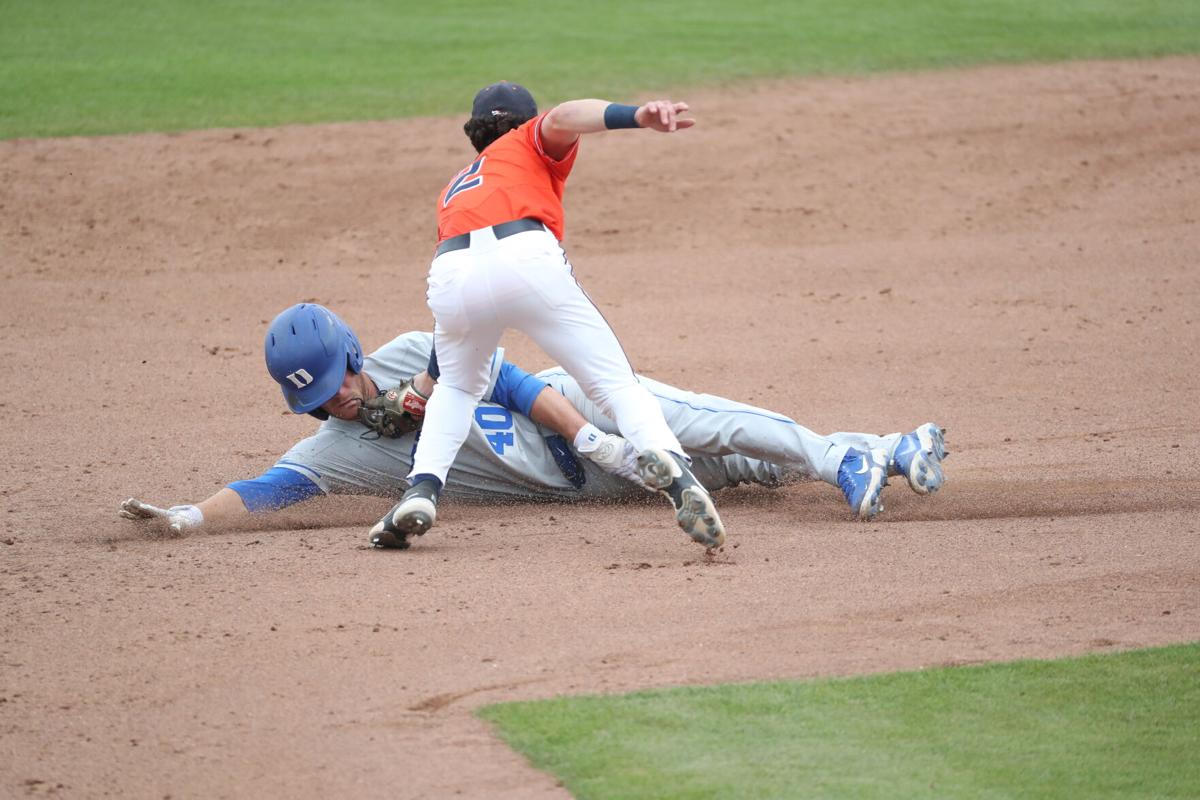 The Virginia baseball team’s pitching staff starred in Friday and Saturday wins over Duke. The Cavaliers allowed just three runs in each contest, striking out 28 over the two days.

In Sunday’s series finale, the pitching wasn’t as stellar, and the bats were silenced late in the game by Duke’s standout reliever Marcus Johnson. Duke took advantage of four home runs, beating Virginia 7-4 to salvage one win from the road series.

“Unfortunately, I think we missed out on a terrific opportunity to get our first series sweep,” UVa head coach Brian O’Connor said. “We just didn’t do enough.”

The game was up in the air for most of the afternoon, with the Cavaliers (19-19, 11-16 ACC) coming close to earning their first series sweep of the spring. A lack of clutch hits — UVa went 1-for-14 with runners on base — hurt the team’s chances of success.

Both sides put up big numbers in the second inning.

Duke (18-18, 9-15 ACC) strung together a two-out rally. The Blue Devils drew a walk, singled through the left side and smacked a three-run home run to right field to take a 3-0 lead. The long ball came off the bat of powerful left-handed hitter Chris Crabtree, who hit his second home run of the series.

UVa came up with a quick response.

The Cavaliers loaded the bases, and junior third baseman Zack Gelof cleared them with a hard-hit double into the right-center field gap. Gelof’s game-tying hit came with two outs. The rally pushed Duke starting pitcher Cooper Stinson out of the game after just 1 2/3 innings.

One-upping Crabtree, Duke catcher Michael Rothenberg ripped a ball over the right-center field fence for a solo home run in the top of the third. Rothenberg’s third home run of the series, which came off UVa sophomore starter Nate Savino, gave Duke a 4-3 lead.

“My stuff runs down, so I just live low,” Savino said. “The stuff that hurts me, like today, everything I left middle or up, obviously they hit it out.”

Virginia’s Devin Ortiz led off the bottom of the fifth with a double. After a groundout to second base, Ortiz scored to tie the game at four when Rothenberg tried to throw him out at third base but threw the ball into left field. Ortiz, a senior first baseman, had a generous lead on third base, but Rothenberg’s throw was low and bounced into left field.

The game was tied 4-4 after five frames. That’s when Duke graduate student Peter Matt, a transfer from Penn, put on a show.

Matt hit a two-out solo home run to right field in the top of the sixth off reliever Zach Messinger to put Duke up 5-4. In the eighth, Matt added a two-run blast to right-center field off lefty reliever Brandon Neeck to give the Blue Devils a 7-4 edge.

“They’re the type of team that thrives on extra-base hits, and they certainly did that today,” O’Connor said.

UVa didn’t have senior reliever Blake Bales available out of the bullpen, according to O’Connor. It’s unclear when the right-hander, who has a 0.60 ERA in 30 innings, might return to action.

While UVa didn’t have one of its best relievers, Duke leaned on star sophomore reliever Marcus Johnson. The reliable right-hander entered the game with two outs in the fifth. He pitched 4 1/3 shutout innings to ensure the Blue Devils at least one weekend win. UVa only mustered two hits and a walk off the reliever.

“We knew that he had one of the best arms and the best stuff on their staff,” O’Connor said.

Ethan Murray, a Crozet native, went 3-for-4 out of the leadoff spot for the Blue Devils. The junior shortstop had significant fan support all series, and he hit well for the Blue Devils and performed admirably in the field. He team left town with a Sunday win as well.

For Virginia, Sunday represented a missed chance. The Cavaliers allowed seven earned runs and left nine runners on base.

“I know this, I know our intent was there, our focus was there, our guys were excited,” O’Connor said. “We just didn’t execute in either facet of the game.”

Mississippi State used a six-run eighth inning to surge past Virginia and to a 6-5 win. The Cavaliers will face No. 2 Texas in an elimination game Thursday at 7 p.m.

Duke’s Peter Matt, right, celebrates one of his two home runs against Virginia on Sunday at Disharoon Park.