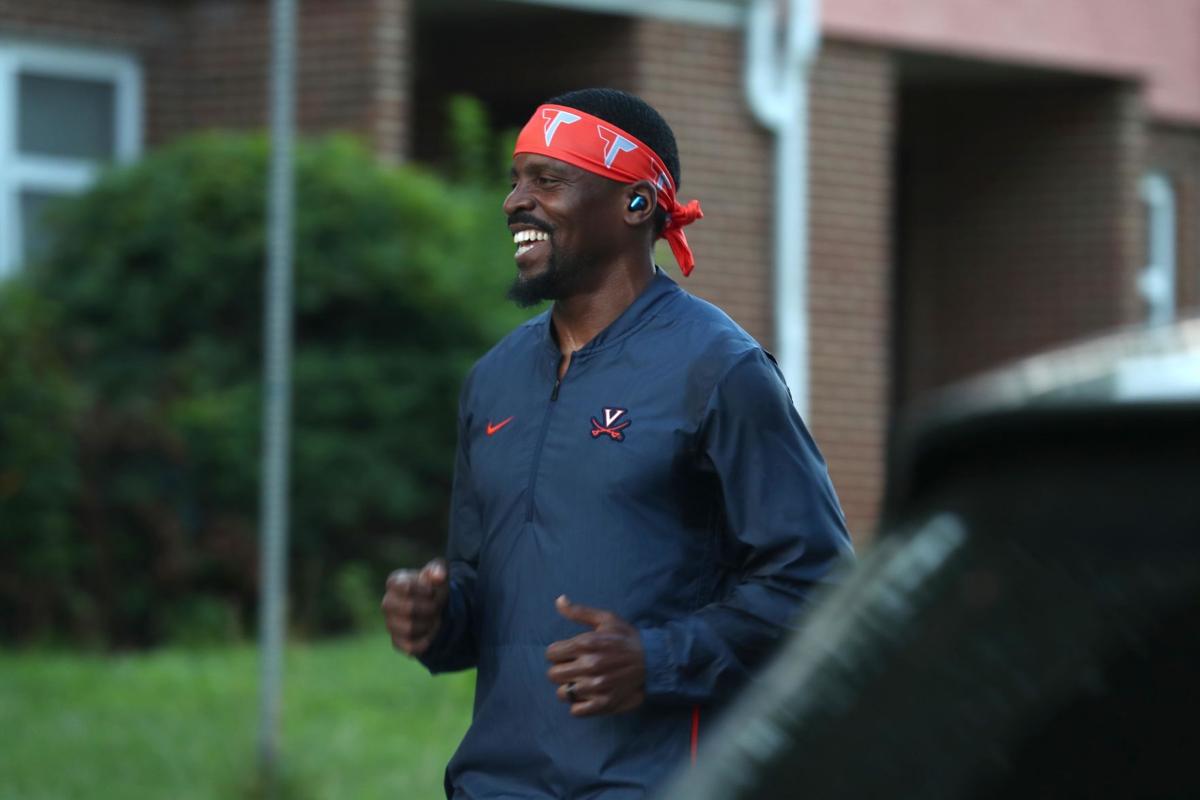 Former Virginia football player Ahmad Hawkins turns around and cheers on runners behind him during a four-mile run through Charlottesville with the ProlyFyck Run Crew. 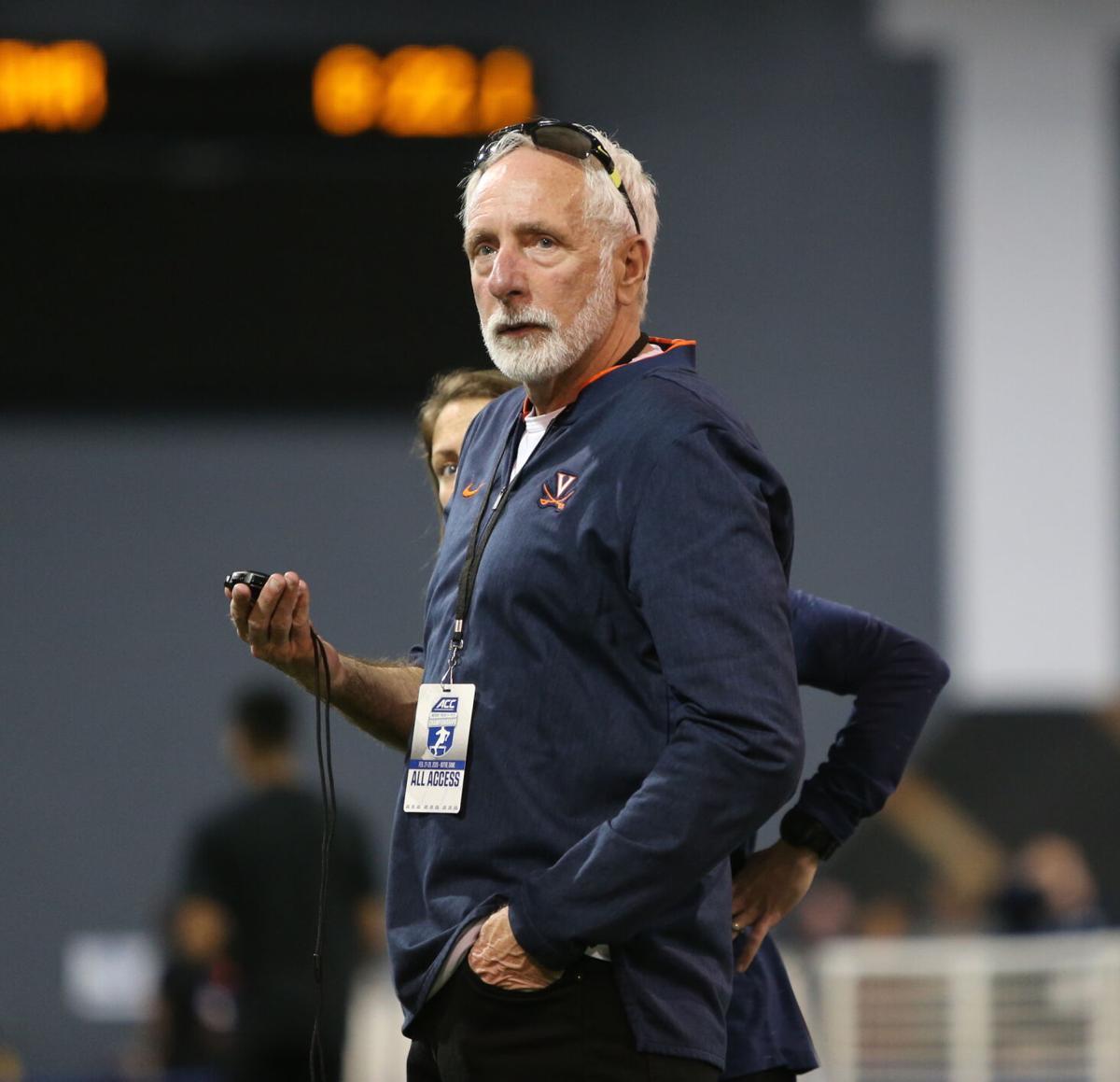 Ahmad Hawkins knows the importance of building a connection between the University of Virginia and the Charlottesville community.

A former Virginia football player and track athlete, Hawkins currently works as a behavioral coordinator at Lugo-McGinness Academy, an alternative high school for at-risk students in Charlottesville. He knows Charlottesville well, from UVa to what he describes as the heart of the city — places like Hardy Drive, Friendship Court and First Street.

“I get excited any time I can build a bridge between the university and the community, especially the African-American community,” Hawkins said. “I know the perception of UVa and just the inner city youth, they feel like it’s not attainable.”

He’s part of a group aiming to foster the connection between UVa and the Charlottesville community with a series of events beginning Tuesday night.

The Virginia track and field program will host a virtual gathering Tuesday at 7 p.m. with members of the UVa team as well as team alumni and current local runners. It’s the first installment of a once-a-month virtual series known as “Track’Ville Talks.” Future events will be held on the second Tuesday of April, May and June in addition to the March event.

Everyone is welcome to register, with organizers of the event hoping to strengthen connections between different Charlottesville running groups.

He’s a Virginia alumnus and he’s also a local runner, participating in a growing group known as the ProlyFyck (pronounced prolific) Run Crew. The diverse group runs through historically Black neighborhoods in Charlottesville every Monday, Wednesday and Friday.

The goal of the group is to inspire people to achieve their own personal greatness, while also offering an outlet for people of all backgrounds to exercise as part of a community. ProlyFyck offers people of diverse backgrounds and running ability the chance to come together to run through Charlottesville.

ProlyFyck will be represented at Tuesday’s virtual event, representing the community along with Mark Lorenzoni, owner of Ragged Mountain Running and Walking Shop. UVa’s current track team will also be represented.

Head coach Vin Lananna, who helped launched the Track’Ville Talks series, will be in attendance. Four UVa student-athletes competing in the NCAA Championships in Arkansas will join virtually from Arkansas.

Lananna feels current track student-athletes, UVa track alumni and local runners are all large, diverse groups, but that the connection between the three groups is lacking.

“It’s all about creating a network and connection point,” Lananna said.

The esteemed running coach spent more than a decade at the University of Oregon. While there, he created a group that met once a month. The group began with about 20 people but grew to 300.

Lananna hopes to grow Charlottesville’s running community and its connection with UVa runners similarly to the way he did at Oregon. He wants alumni to feel connected to the program despite graduating from the university.

“Those people who graduated want desperately to be connected with their program,” Lananna said. “They’re very fond of their institution. They’re very proud of it, and it is one thing to read the results and to watch somebody throw the discus and it’s another thing to actually know what makes these kids tick, what’s important to them.”

Lananna loves strong running communities, and he believes Tuesday’s event is a step toward building the connections between the local community and UVa’s current student-athletes and alumni. With UVa set to host the 2023 NCAA cross country championships, Lananna wants to get the ball rolling on building a strong connection between different groups of Charlottesville runners.

“I think that all collegiate athletics should be a community connector and builder,” Lananna said.

Hawkins knows well the difference between sports like football, men’s basketball and track. Community members flock to follow football and men’s basketball, while other sports have a tougher time with resources and generating fan interest.

It often takes events like the one Tuesday night to grow those bonds.

In Hawkins’ eyes, the bonds go both ways. From the community supporting the university’s athletic programs to UVa giving back to the local area, often sparking hope in the kids Hawkins works with daily that one day they can attend UVa if they so choose.

“It’s more than just being lip service,” Hawkins said. “You really got to be a part of the community and be one because in the grand scheme of things we’re trying to pull each other out and make each other great.”

Simone Biles reveals if she will return to the Olympics

What is the New York Giants ceiling this season?

What is the New York Giants ceiling this season?

Are the Eagles and Texans close on a deal for Deshaun Watson?

Are the Eagles and Texans close on a deal for Deshaun Watson?

The United States’ men’s basketball team remains the favorite to win gold at the Tokyo Olympic Games, but an international team lead by an NBA…

Olympic moment: Record-setting 400-meter hurdles final is being called the greatest race ever

The race produced a world record, a masterpiece and slice of history. It might have been one of the best races ever run. Here's why.

A grueling nine-week summer conditioning period came to an end Friday for the Virginia football team when redshirt senior defensive lineman Mandy Alonso pulled a sledgehammer over his head and slammed it down to “break the rock.”

Former Virginia football player Ahmad Hawkins turns around and cheers on runners behind him during a four-mile run through Charlottesville with the ProlyFyck Run Crew.