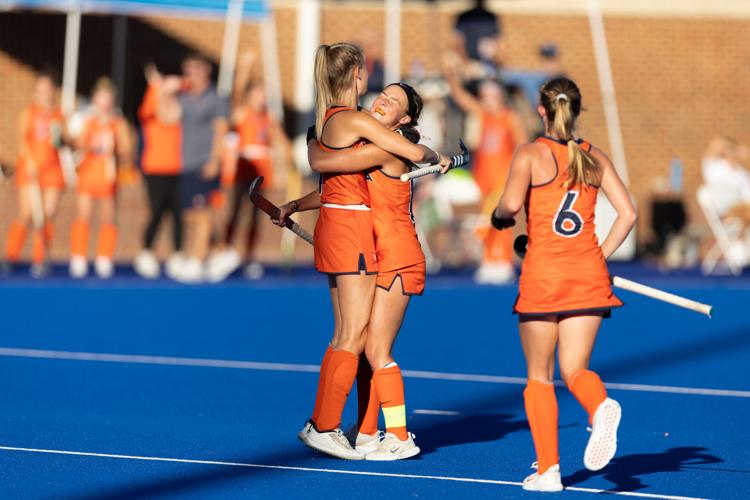 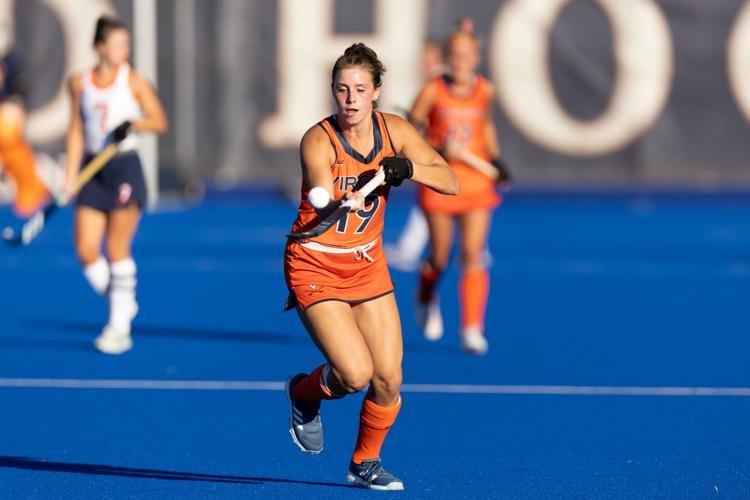 Senior Cato Geusgens scored a pair of goals to lead the No. 10 Virginia field hockey team to a 3-0 victory over Syracuse on Friday at the UVa Turf Field.

“The team stepped up today,” Virginia coach Michele Madison said. “They put the pressure on, and they kept the pressure on. They were relentless in their pursuit. Our defensive corners showed up and took away their chances. It was a total team effort on our part. They just dug deep and did what it takes to win and dominate an ACC game.”

Ten of Virginia’s shots came in the first period as the Cavaliers went on the attack early. Geusgens knocked in a shot from the top of the circle to give UVa a 1-0 lead in the waning seconds of the opening period.

Virginia continued to put on the pressure in the second quarter, firing off another seven shots to take a 17-2 shot differential into the halftime break, as well as the 1-0 lead.

The Cavaliers added their second goal on their 13th penalty corner of the game in the fourth quarter. Syracuse saved an initial shot from Jans Croon, but Adele Iacobucci found the ball after the save and zipped it over to Laura Janssen, who was positioned at the corner of the cage to deflect it in.

Syracuse pulled its goalkeeper with 3:48 remaining in the game, a move that proved costly when UVa earned its 14th penalty corner of the game. With no keeper in the net, the Orange defense could not keep Geusgens’ shot out of the cage.

The Cavaliers conclude their homestand next weekend by hosting No. 3 Louisville on Friday at 3 p.m. and No. 17 William & Mary on Oct. 2 at 1 p.m.

The Virginia men’s and women’s cross country teams swept the women’s 5k and men’s 8k races at the Coast-to-Coast Battle in Beantown on Friday afternoon in Boston.

The Virginia women remained undefeated on the season as they clinched their third victory of the campaign. Leading the way once again for Virginia was Margot Appleton, who crossed the finish line with a time of 17:12 to finish second and clinch her third top-two finish in three races this season.

Following Appleton by less than a second was Massachusetts native Camryn Menninger, who took third place for the third time this season. The scoring places were rounded out by Esther Seeland, Sophie Atkinson and Anna Workman who placed fifth, seventh and 10th, respectively.

On the men’s side, Virginia won its second consecutive meet of the season as the Cavaliers went 2-3-4-5-6 in the men’s 8k to earn the top spot.

Leading the way for Virginia was Yasin Sado, who recorded his second consecutive runner-up finish this season with his time of 23:53. Following Sado were Justin Wachtel, Jack Eliason, Rohann Asfaw and Virginia debutant Will Anthony, whom all crossed the finish within four seconds of Sado and helped the team capture its second victory in as many races.

Virginia has won its last two races following a second-place finish in its season opener. The Cavaliers topped No. 15 Harvard and No. 20 Syracuse.

“It was excellent to see our teams put in a dominant performance today,” Virginia coach Vin Lananna said. “Both teams entered with a good race plan, executed them well and are progressing nicely overall.”

Maddie Mercado scored the game’s lone goal and No. 18 Notre Dame defeated the No. 2 Virginia women’s soccer team 1-0 on Thursday night, handing the Cavaliers their first loss of the season.

Mercado’s goal came in the 76th minute on a shot from point-blank range following a corner kick. Virginia (8-1-1, 1-1-0 ACC) had several chances to score the equalizer down the stretch, getting a pair of shots from Haley Hopkins and one from Lia Godfrey, but the Irish (8-1-0, 1-1-0 ACC) were able to turn away the chances and earn the victory.

“No question the better team won tonight,” Virginia coach Steve Swanson said. “We had trouble solving their pressure and just could not get much going on the attacking side. There are a lot of takeaways from this game, though, and hopefully if we can learn the lessons, we will improve in the areas we need to moving forward.”

Virginia returns to action on Sunday, when the Cavaliers host Louisville in a 2 p.m. contest at Klöckner Stadium.

Behind the Scenes - At the World Cup media hub

Behind the Scenes - At the World Cup media hub

Tunisia our inspiration says USA captain ahead of Netherlands match

Tunisia our inspiration says USA captain ahead of Netherlands match