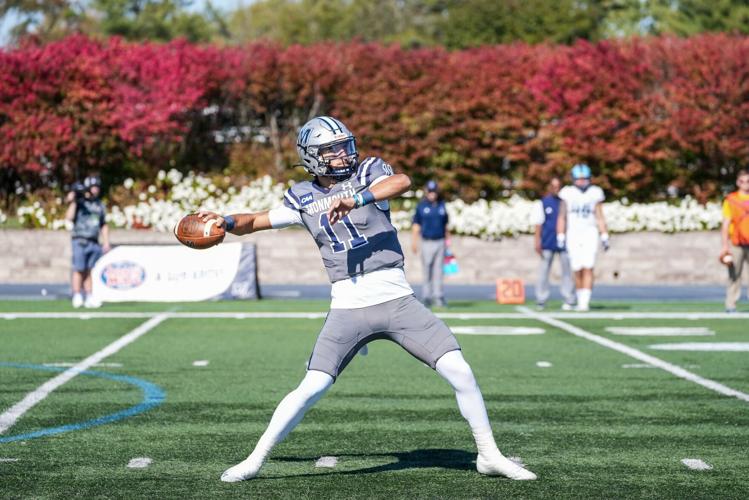 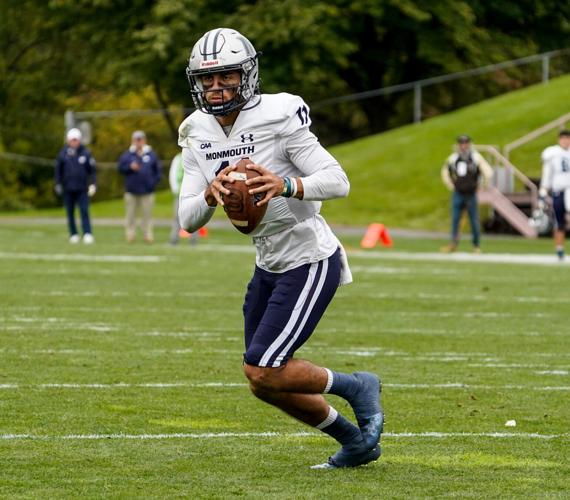 During his time at Monmouth, quarterback Tony Muskett racked up 5,687 passing yards and 51 touchdowns compared to 16 interceptions.

The jump in competition level won’t matter when it comes to this key attribute for Virginia’s newest quarterback.

Tony Muskett, the transfer signal-caller from FCS Monmouth who committed to Virginia on Sunday afternoon, can command a huddle and has the ability to gain the respect of his teammates, according to those who have worked with Muskett previously.

“There’s no doubt he can lead,” said Lafayette offensive coordinator T.J. DiMuzio, the former Monmouth assistant who recruited Muskett out of West Springfield High School in Northern Virginia to the Hawks.

DiMuzio was Muskett’s position coach at Monmouth for two seasons also, before accepting the job he has now.

“He’s real, he’s genuine and he’s not going to BS you,” DiMuzio said. “He’s going to go to work, and at the end of the day, I think that’s what guys look for. They want to see guys that work and guys that aren’t fake. And he’s real.”

DiMuzio pointed to the tricky situation Muskett encountered and navigated as a freshman for the Hawks. Their expected top quarterback was a senior, but got hurt, which DiMuzio said opened up an opportunity for the then-rookie Muskett.

DiMuzio said: “He was able to lead … and he took it and ran with it.”

The result — during Monmouth’s four-game campaign in the spring of 2021 after the fall season was postponed because of COVID-19 — was stellar as Muskett threw for 1,039 yards and nine touchdowns while completing 62.5% of his throws. He was the Big South Offensive Freshman of the Year and finished fifth in voting for the Jerry Rice Award, an honor given annually to the top freshman in the FCS.

West Springfield coach Anthony Parker wasn’t shocked by Muskett’s immediate success and the ultimate impact he made for the Hawks.

Parker said Muskett was always the player as a prep standout who could corral his teammates during the long offseason when there wasn’t a ton of required football happening.

“Great leader,” Parker said. “He was responsible for all of our out-of-season stuff with our kids and getting our kids out on the field, working with them and getting them better. And then his senior year was really special for us and he threw the ball really well, ran the ball well. He’s just a good football player.”

Parker relayed a lot of that to UVa quarterbacks coach Taylor Lamb, Parker said, when Lamb reached out about Muskett after Muskett entered the transfer portal late last month. Before joining coach Tony Elliott’s staff at UVa, Lamb was the offensive coordinator at Gardner-Webb, which matched up against Monmouth in Big South action in 2021 — the Hawks’ last year in the conference ahead of joining the Colonial Athletic Association this past fall.

Against Lamb’s Bulldogs, Muskett threw for 289 yards and four touchdowns in a blowout home win for the Hawks.

In his Monmouth career, Muskett racked up 5,687 passing yards and 51 touchdowns compared to 16 interceptions.

“[Lamb] was in that conference, and he was like, ‘We thought he was special then,’” Parker said. “And I was like, ‘He’s a better person when you get to meet him.’ He’s humble, but he’s also cocky at the same time where he’s going to be really coachable but he’s going to demand that his teammates listen to him and follow him, so he’s definitely going to lead UVa to some good things.”

Parker said he can’t pinpoint why Muskett didn’t garner more FBS offers than only the one he landed from Coastal Carolina out of high school. At West Springfield, he threw for more than 7,000 career yards and had 69 touchdowns. His other notable offers then came from Penn, Richmond and William & Mary.

“A lot of people wanted to come in and see him, watch him throw, but I don’t know,” Parker said. “I don’t think they were overwhelmed by him then, but he was a good football player. He was a really good football player … but he’s so much stronger throwing the ball now and so much more polished that I was like, ‘I thought he could play anywhere,’ now and I’m not surprised by the offers he’s gotten since he went into the portal.”

And DiMuzio shared thoughts similar to Parker’s about Muskett’s arm strength from his early days in college to now, perhaps, as one of the reasons why Muskett was so sought-after while in the transfer portal.

“He didn’t have a very strong arm when he first showed up [to Monmouth],” DiMuzio said, “and then he worked very hard at getting it stronger, and sometimes that stuff is tough to measure.

“But for instance,” DiMuzio continued, “when we first started throwing the deep ball and you look at just how far he could throw it when you’re testing it, he started at like 63 or 64 [yards] and within a year he was at 71, so he improved his arm strength. That’s not a great metric, but it is a metric.”

DiMuzio said Muskett upped his running ability, too, by working closely with Monmouth strength coach Tim Rehm and that the training enabled Muskett to quicken his straight-line speed but, more importantly, teach him to control his body so he could slip past and avoid defenders while carrying the ball.

Muskett rushed for at least 50 yards in three games this past fall.

On top of the skill set and leadership traits Muskett holds, what DiMuzio said should enhance Muskett’s chance to thrive with the Cavaliers is his intelligence. DiMuzio said Monmouth trusted the quarterback to make his own decisions, beginning early in Muskett’s career there.

“That’s why I’m really confident in his ability to pick up whatever it is because he came in and picked our offense up as a freshman,” DiMuzio said. “He was able to play those first four games in the COVID spring that we played, so I’m very confident he’ll be able to pick it up.

“The thing he does best is he processes information really quickly,” DiMuzio said, “and that helps with the playbook, but it’s also once the ball is snapped. He’s able to get through his reads and progressions faster than a lot of kids because he processes the information so quickly.”

Both DiMuzio and Parker said they’re thrilled Muskett is getting a chance in the FBS.

Parker said he’s even more excited Muskett has the opportunity in his home state.

“I’m looking forward to seeing what he could do at that level,” Parker said, “and how special he could be. It looked seamless from the high school level to the FCS level, so I think it’ll be pretty good for him. It was a great choice for UVa to offer him and now I’m just excited to see it.”

Stuck in the portal: Virginia's All-ACC linebacker one of more than 120 ACC players who hasn't found a new home

UVa's Nick Jackson is just one of over 120 players who entered the NCAA transfer portal this offseason and have not found a new program yet going into Wednesday’s national signing day, per a source with access to the database.

As Saturday dawned, Virginia was the only ACC team without at least one player averaging more than 13 points per game. But as the afternoon’s 76-57 thumping of Boston College affirmed, this Cavaliers’ offense is elite and in overdrive.

During his time at Monmouth, quarterback Tony Muskett racked up 5,687 passing yards and 51 touchdowns compared to 16 interceptions.