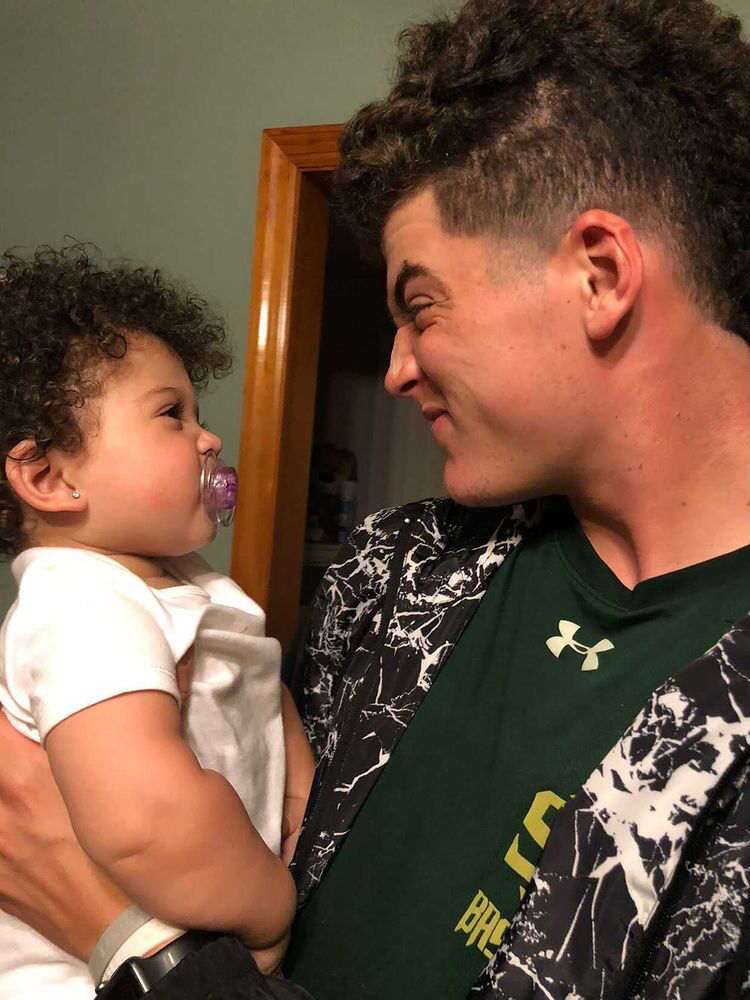 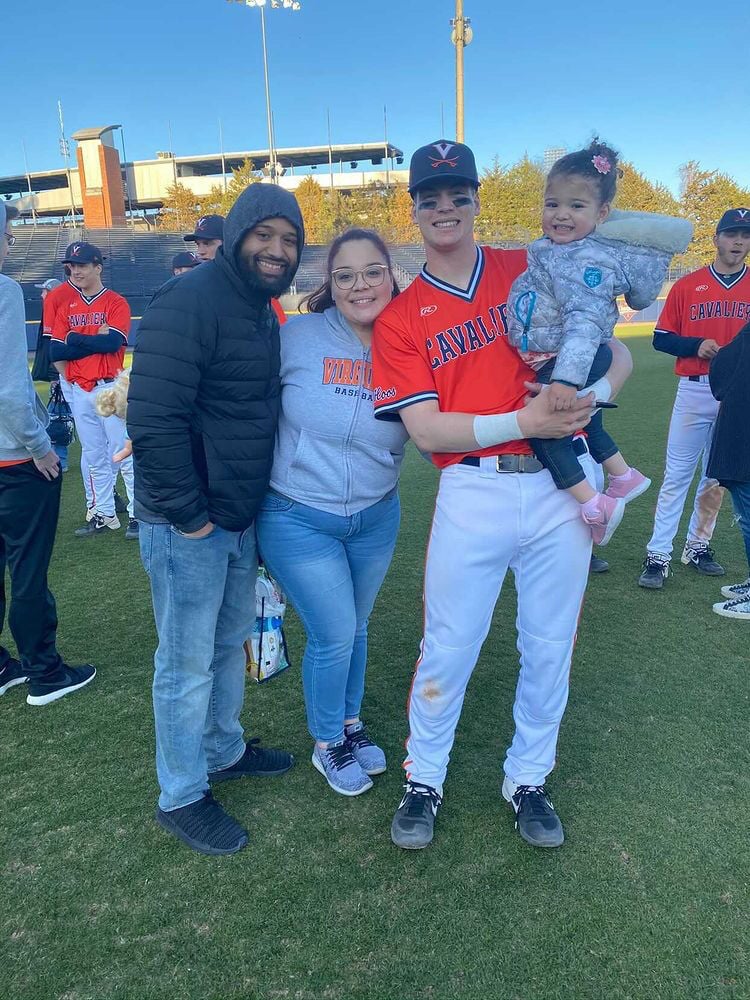 There were health complications with her unborn daughter.

Doctors told Crystal that her daughter wouldn’t be able to walk or talk. She might be brain dead, and she’d only live two years.

On Tuesday, just over a month before her fourth birthday, Riley Cameron watched on TV with her parents as Devin Ortiz, her uncle and godfather, hit a walk-off home run to send the Virginia baseball team to the super regionals.

Not only is Riley alive today, she came into the Ortiz’s lives at a time when they needed her.

In 2015, Devin and Crystal’s parents got divorced. It was a tough time within the family. Devin was still in high school, working toward a collegiate baseball career.

Two years later, Devin suffered a shoulder injury prior to joining the Virginia baseball program. As he dealt with injury, Crystal learned about Riley’s diagnosis. Riley had spina bifida, a neural tube defect that affects the spine and can lead to a range of issues, including problems with movement.

Doctors’ concerns about the baby were so significant they presented abortion as a possible option at one point.

“The broader pregnancy, it was a rollercoaster ride for all of us,” Devin said.

Crystal and her family put their faith in God, wanting to fight for Riley’s life. She was born in July of 2017.

Life hasn’t been easy for Riley, but the constant smile on her face belies her daily challenges. Despite undergoing a handful of surgeries and using a wheelchair, walker and ankle braces, Riley goes through each day with infectious energy.

Riley’s journey helps inspire the Ortiz family as they deal with challenges in their lives.

In the summer of 2017, Devin prepared to go off to college. Crystal battled health complications of her own related to Riley’s birth, while also dealing with the uncertainty of what could happen to her child.

When Riley was born, she needed medical care and surgeries. Devin, off at college, wasn’t a starter for one of the first times in his baseball life.

“Something our parents always taught us is that if you let these obstacles overtake you and overcome you, you’re never gonna get through that,” Crystal, Devin’s older sister by seven years, said. “You have to learn to embrace these obstacles and accept those obstacles and conquer them. I think that Devin and Riley and just all of us in general always have that in the back of our mind.”

For Devin, that meant staying at the baseball diamond when practices or games ended for additional work. He had no thoughts of transferring from UVa, even as peers departed his freshman season. He picked UVa for a reason, and he planned on putting the work in to become an impact player.

“He didn’t play much here for two years, and what you’re seeing in college baseball is a lot of kids decide that maybe they need a change of direction and a different place,” head coach Brian O’Connor said. “He didn’t.”

For Crystal, overcoming meant leaning into any challenges associated with Riley’s disabilities. Fortunately, she had Riley by her side, who isn’t deterred one bit by obstacles in her way.

The family decided to use social media to raise awareness about spina bifida and their personal journey. Crystal has over 13,000 Instagram followers, and she’s eclipsed 74,000 followers on TikTok. They turned a potential obstacle into an opportunity to inspire others, helping families in similar positions feel connected and supported.

Crystal stays in contact with a social media connection that lives in the Philippines. She sends photos of her own daughter and how her journey is progressing, keeping Crystal updated.

When the Ortiz family has moments of doubt as they try to overcome obstacles, they lean on each other. Often, they just look at Riley’s attitude and use that as inspiration.

One of Riley’s most inspiring moments came six months ago, on New Year’s Eve. Expected to need some combination of a wheelchair and crutches for her entire life, Riley once again proved a diagnosis wrong.

She told her parents to look, as she started taking steps from near one end of a coffee table. Crystal’s husband and Riley’s father, Bryan Cameron, looked on from the other side of the table in disbelief.

Within a week, Riley was telling her parents she didn’t need the crutches.

In 2019 he received more playing time, going 4-0 on the mound with a 1.78 ERA in 35 1/3 innings. At the plate, he made five starts as a designated hitter and outfielder. He was the team’s only two-way player.

After a standout performance at the plate in a Florida summer league, UVa shifted the two-way player to primarily a role at first base. He didn’t pitch in 2020, but hit a pair of grand slams in 17 starts before the season was canceled due to COVID-19.

This season, he’s been arguably the team’s most consistent performer from February to June. He began the season hitting balls hard, but right at defenders. Eventually balls found gaps. Entering the Columbia Super Regional, he’s tied for the team lead with eight home runs and has a .289 batting average.

“I really believed that he was going to turn the corner in this program, and he has,” O’Connor said.

As a first baseman, he has a superb fielding percentage of .996. A left shoulder injury forced him to play designated hitter in recent weeks, but it also gave him a chance to work on his pitching during midweek scrimmages.

That work proved valuable in the Columbia Regional, when Ortiz started the final game against Old Dominion. In the first pitching start of his collegiate career, Ortiz threw four shutout innings and hit the walk-off home run in the 10th inning after he moved back to designated hitter once off the mound.

His walk-off home run was an emotional moment for the Ortiz family.

“This week, it was kind of like a breath of fresh air,” Crystal said. “It’s a reminder like, ‘See what I mean if you just roll with the punches and overcome those punches, you’re gonna be bigger than those.’”

The home run also elated Riley, who Crystal says has a best-friend relationship with Devin, rather than a traditional uncle-niece relationship. When Riley calls Devin, she never wants to give the phone up. She always wants to chat with her godfather, who she calls “Nino.”

Devin said Riley is starting to understand that he’s at school, which is why he isn’t with them in New Jersey. Still, she’s often trying to FaceTime Devin at inopportune times.

Riley’s unwavering support and love not only inspires the family, it helped them come together.

“The birth of Riley, me being away for college and my sister going through her things really brought all four of us back together,” Devin said. “My relationship with my sister, my dad, my mom and all four of us together, it’s never been as great as it is now. It just shows, no matter what happens, what’s going on in families, not to give up on them.”

Ortiz sat in his hotel room Thursday evening, taking a break from a hectic week. The Cavaliers advanced through an NCAA regional that took five days. They remained in Columbia for this weekend’s upcoming games, and several stars including Ortiz spent much of this week dealing with numerous national and local media obligations.

As he took a moment to reflect, Ortiz remembered his feelings in 2015 when his parents got divorced.

“I look back at the time they got divorced and you think as a kid, ‘Oh, man, things will never be the same,’ but obviously with times things got better and now we all talk to each other as if nothing ever happened,” Devin said. “I think that’s the most important thing for us is that we stay together and we have fun and continue to acknowledge and love each other’s success.”

The love never left, but three-year-old Riley helped remind the family of what really matters.

“She’s definitely the rock in the family that brought us back,” Devin said.

Detroit Lions embrace being underdogs in 2021

The 2021 All Central Virginia baseball team.