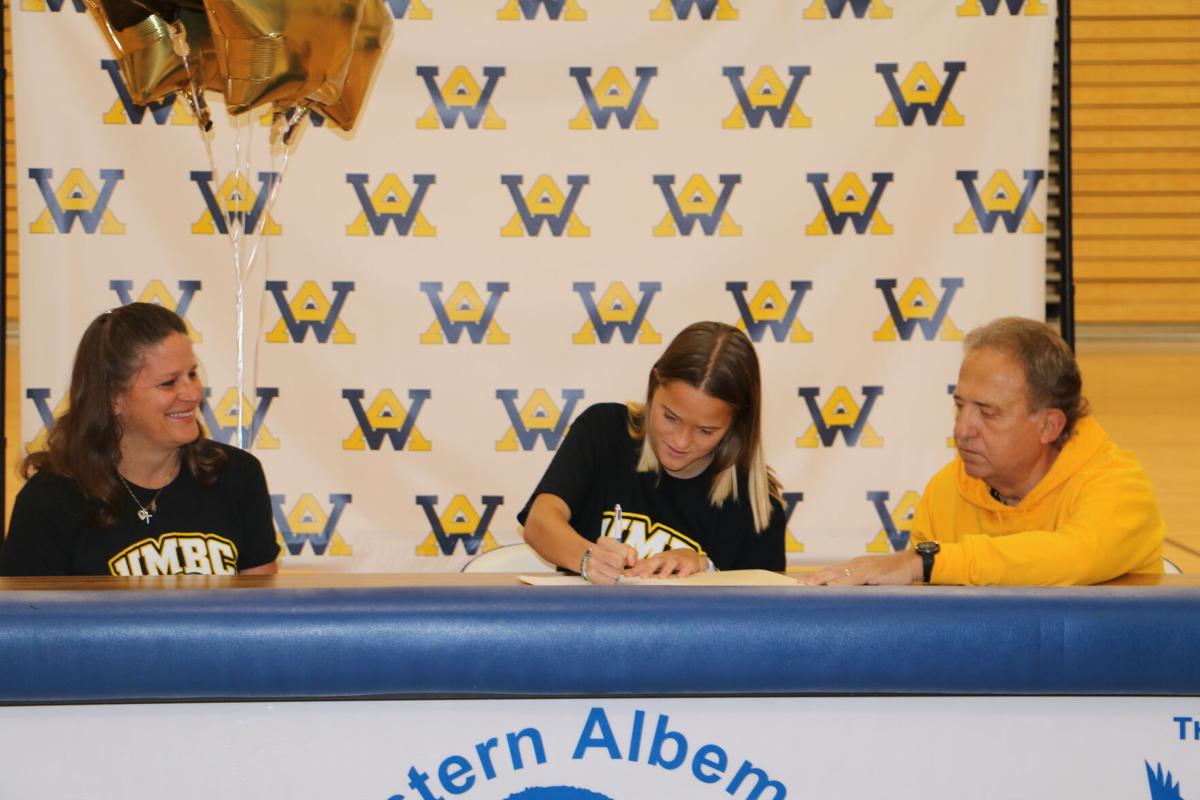 Western Albemarle’s Catherine Domecq, center, signs her National Letter of Intent to play soccer at UMBC on Friday in Crozet. 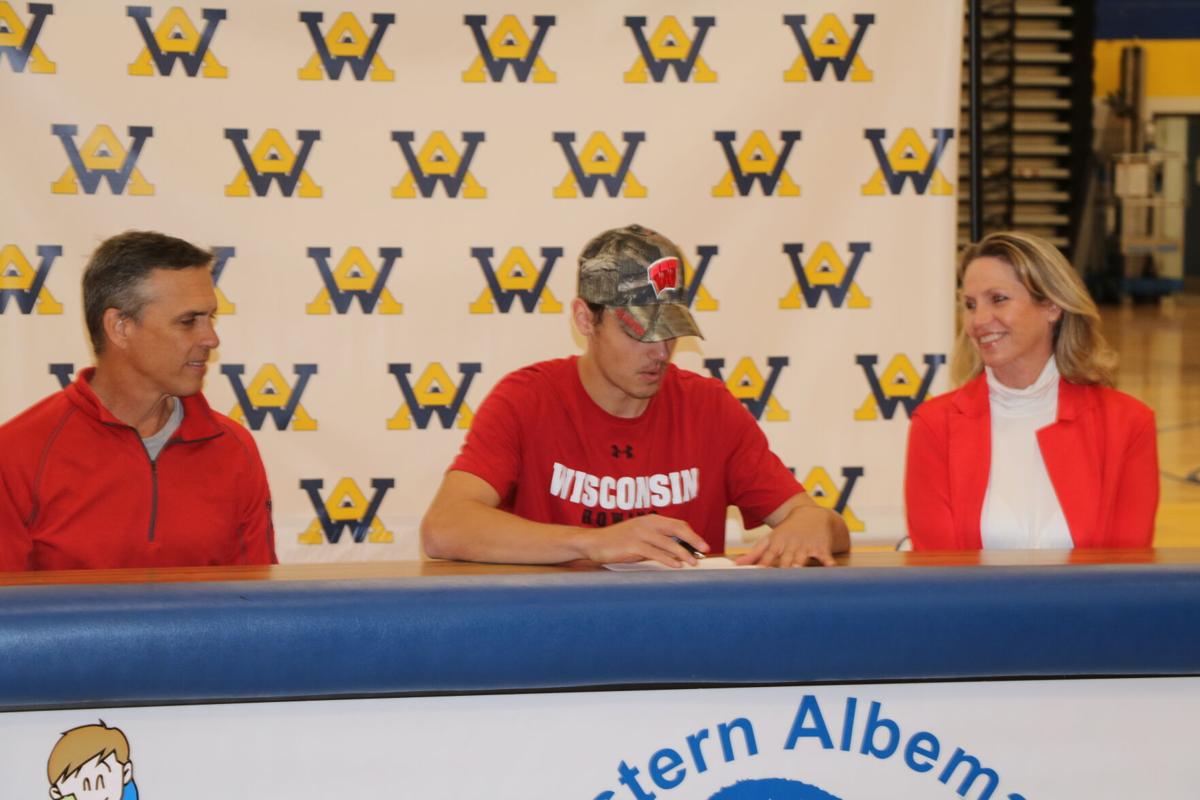 Western Albemarle’s Lucas Farmer, center, signs his National Letter of Intent to row at Wisconsin on Friday in Crozet. 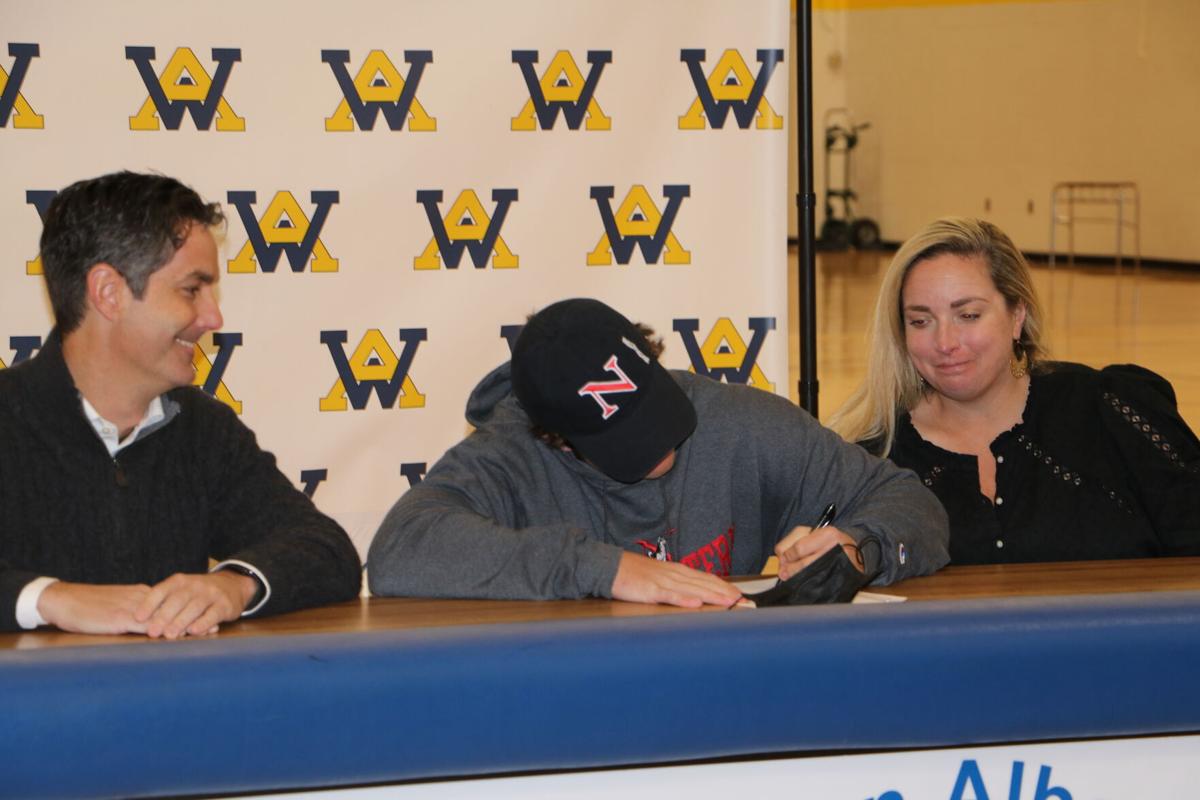 Western Albemarle’s Will DonovanWill Donovan, center, signs his National Letter of Intent to row for Northeastern University on Friday in Crozet.

The Thanksgiving holiday is next week, but three Western Albemarle High School athletes had plenty to be thankful for on Friday as they each signed their National Letter of Intent to play college sports.

Soccer player Catherine Domecq and rowers Will Donovan and Lucas Farmer put pen to paper to finalize their plans for continuing their athletic careers at the next level.

For Domecq, who signed to play soccer at the University of Maryland-Baltimore County, Friday’s signing continues a family legacy.

Her older sister, Christine, was an all-regional performer for the Warriors and turned down larger school offers for an opportunity to win a national championship at Lynchburg in 2014. Her brother, Derek, who had opportunities to play baseball and football, is a pitcher at Radford University.

The family legacy doesn’t stop there.

Domecq’s mother, Julie, was an All-American swimmer at Virginia and led the Cavaliers to their first Atlantic Coast Conference championship. Greg Domecq, her dad, was an assistant basketball coach with the Cavaliers from 1988-92 and helped guide the Cavaliers to an NIT crown.

“Now it is my turn,” Catherine Domecq said, “and I felt I had to continue the family legacy.”

The journey to UMBC was an challenging one for Domecq because of the COVID-19 pandemic. Instead of a normal recruiting period, which includes official campus visits and college coaches watching her play in person, the process occurred through mostly emails and Zoom calls.

Despite the limitations, Domecq earned three Division I offers, a pair of Division II offers and three offers from Division III programs before ultimately choosing UMBC.

“Coach Vanessa Mann is not only an outstanding coach, but an incredible person,” Domecq said. “She emphasized the role UMBC could play in my development, not only as a player, but as a person. It is a team that brought in 14 freshmen last year and are in the early stages of building an outstanding program.”

Domecq credits Western Albemarle girls soccer coach Jake Desch for grooming her and her teammates to play at the next level.

“It’s been great at Western to be a part of a championship tradition, winning four state championships in a row, but I wanted to be a part of making a program great,” Domecq said. “I was blessed to be coached by Jake Desch, who is a proven winner who has established Western and himself as simply the best in Virginia.”

With one final season on the pitch remaining, Domecq will savor her remaining time as a Warrior.

“I have so many emotions,” she said. “I was a ball girl in elementary school and middle school and a varsity player throughout high school. My life has revolved around being a Warrior. Not being in Crozet, with no other siblings to wear the royal blue and gold after graduation is a concept about which I have yet to come to terms.

“I know I will take the remaining seven months and enjoy every moment. I have grown up being taught that working hard is not only enjoyable, but expected and rewarding. When I walk across that stages on June 3, I will know that I was prepared well by my parents and siblings, my coaches and my teachers.”

Donovan and Farmer have been key contributors for the rowing program at Western Albemarle. The duo have set the tone with their performances each year.

Donovan will continue his career in Boston, a hotbed for rowing, at Northeastern University. Farmer is also making the most of this opportunity as he will join the crew team at Wisconsin.

Western Albemarle’s Catherine Domecq, center, signs her National Letter of Intent to play soccer at UMBC on Friday in Crozet.

Western Albemarle’s Lucas Farmer, center, signs his National Letter of Intent to row at Wisconsin on Friday in Crozet.

Western Albemarle’s Will DonovanWill Donovan, center, signs his National Letter of Intent to row for Northeastern University on Friday in Crozet.