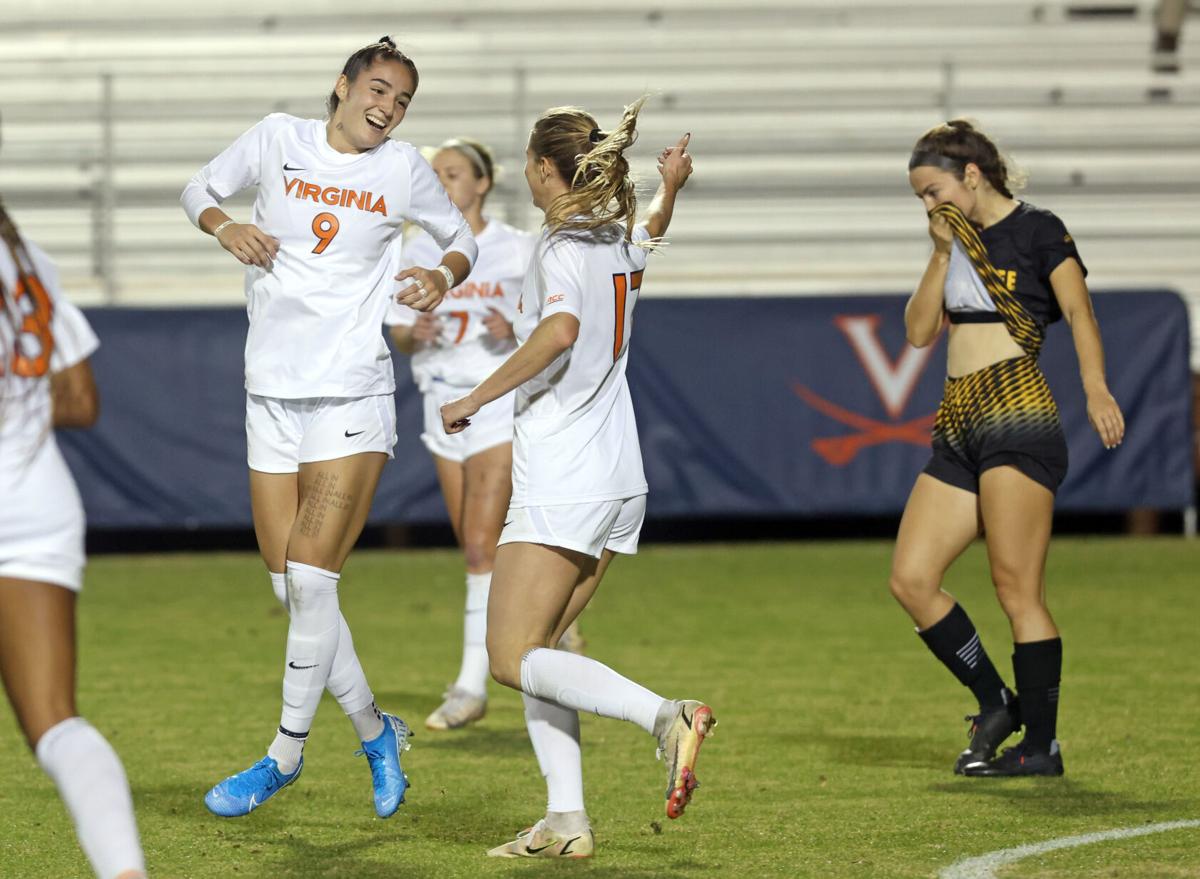 Virginia’s Diana Ordoñez, left, celebrates her goal against Milwaukee with teammate Haley Hopkins during the second round of the NCAA Tournament on Thursday at Klöckner Stadium. See more photos at DailyProgress.com. 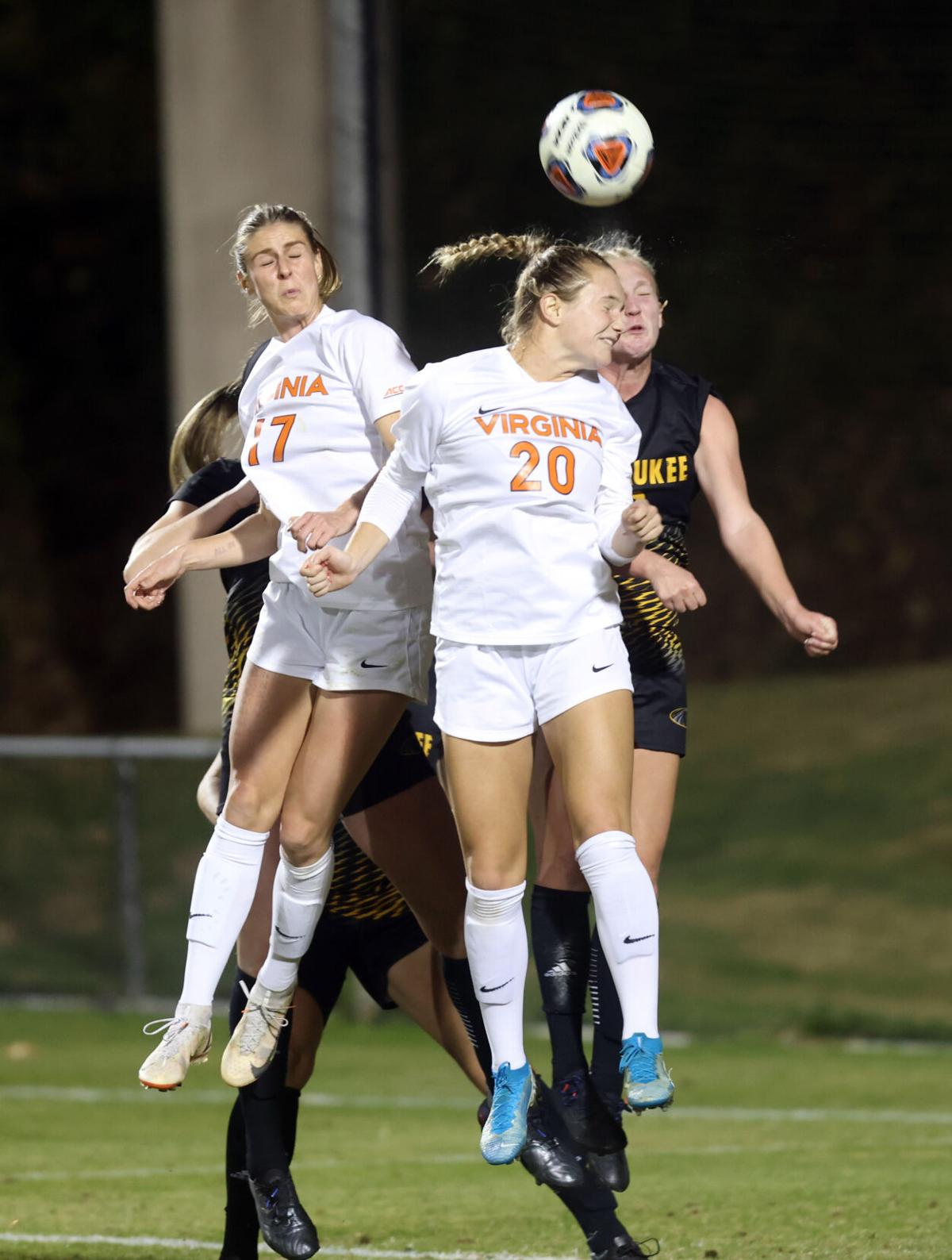 Virginia’s Talia Staude, front, heads the ball next to teammate Haley Hopkins, left, during the second round of the NCAA tournament against Milwaukee on Thursday at Klöckner Stadium.

Top-seeded Virginia is moving on.

The Cavaliers knocked off visiting Milwaukee, 2-0, in the second round of the NCAA women’s soccer tournament on Thursday at Klöckner Stadium.

UVa (18-2-2) outshot Milwaukee (19-2), 17-2, and got its game-deciding goal in the first half from standout junior forward Diana Ordoñez before she polished off the win with another goal late in the second half.

Here are three takeaways from the Cavaliers’ postseason victory:

The Cavaliers spent the early portion of the match creating one opportunity for themselves after the next, threatening to take a lead with each shot.

But Milwaukee defended well, stopping UVa’s first five shots and denying the Cavaliers any clean looks off the three corner kicks they had in the opening 20 minutes.

That much relentless pressure, though, eventually was too much for the Panthers to withstand without yielding anything and Virginia broke through on its sixth shot of the contest when Ordoñez’s header off a well-timed, high-arching lofted pass from sophomore defender Samar Guidry found the back of the net.

It was the 17th goal of the campaign for Ordoñez, who was the Atlantic Coast Conference’s Player of the Year this season. She added her 18th goal later in the match.

She’s scored at least once in six of UVa’s last seven contests and has tallied five multi-goal performances this fall.

The few occasions in which Milwaukee appeared to have chances to move the ball toward UVa’s goal, the Cavaliers’ speed overwhelmed the Panthers and ruined any those potential scoring opportunities before they could start.

A noticeable example came in the first half, when UVa senior forward Alexa Spaanstra chased down a Milwaukee forward, who was dribbling the ball well ahead of Spaanstra, past midfield. But Spaanstra caught her from behind, took the ball and turned it around the other way to provide the Cavaliers with possession again.

When the Panthers passed the ball, UVa players frequently closed on those passes and didn’t allow Milwaukee much room to operate.

Milwaukee went without a shot in the opening half and managed only two shots in the second half.

Spaanstra’s quickness on offense was an issue, too, for Milwaukee. In the second half, with the Panthers worn down, Spaanstra accelerated down the right side with ball before dribbling around a few defenders as she neared the net ahead of setting up Ordoñez for her second goal of the night.

UVa advances to the third round of the tournament and will host No. 4-seed BYU on Saturday in Charlottesville.

The Cougars were 4-1 winners over Alabama on Thursday, using a hat trick and an assist from senior midfielder Mikayla Colohan to eliminate the Crimson Tide. BYU, which captured a West Coast Conference championship leading into the NCAA Tournament, has outscored its first two opponents in the event 10-1.

UVa and BYU last met this past spring in the second round of the NCAA Tournament, and the Cavaliers came away with a 2-0 victory behind two goals from Spaanstra.

“A kickoff return for a touchdown and a punt return that changes field position and then we have our defense out to block a field goal and we jump offsides, so that alone could’ve been the difference.”

PITTSBURGH — This wasn’t the defensive debacle a few weeks earlier at BYU. Nor was it the slew of missed tackles in the first half a week ago …

The Virginia women's soccer team's season comes to an end with a 1-0 loss to BYU in the NCAA Tournament at Klöckner Stadium.

Virginia’s Diana Ordoñez, left, celebrates her goal against Milwaukee with teammate Haley Hopkins during the second round of the NCAA Tournament on Thursday at Klöckner Stadium. See more photos at DailyProgress.com.

Virginia’s Talia Staude, front, heads the ball next to teammate Haley Hopkins, left, during the second round of the NCAA tournament against Milwaukee on Thursday at Klöckner Stadium.