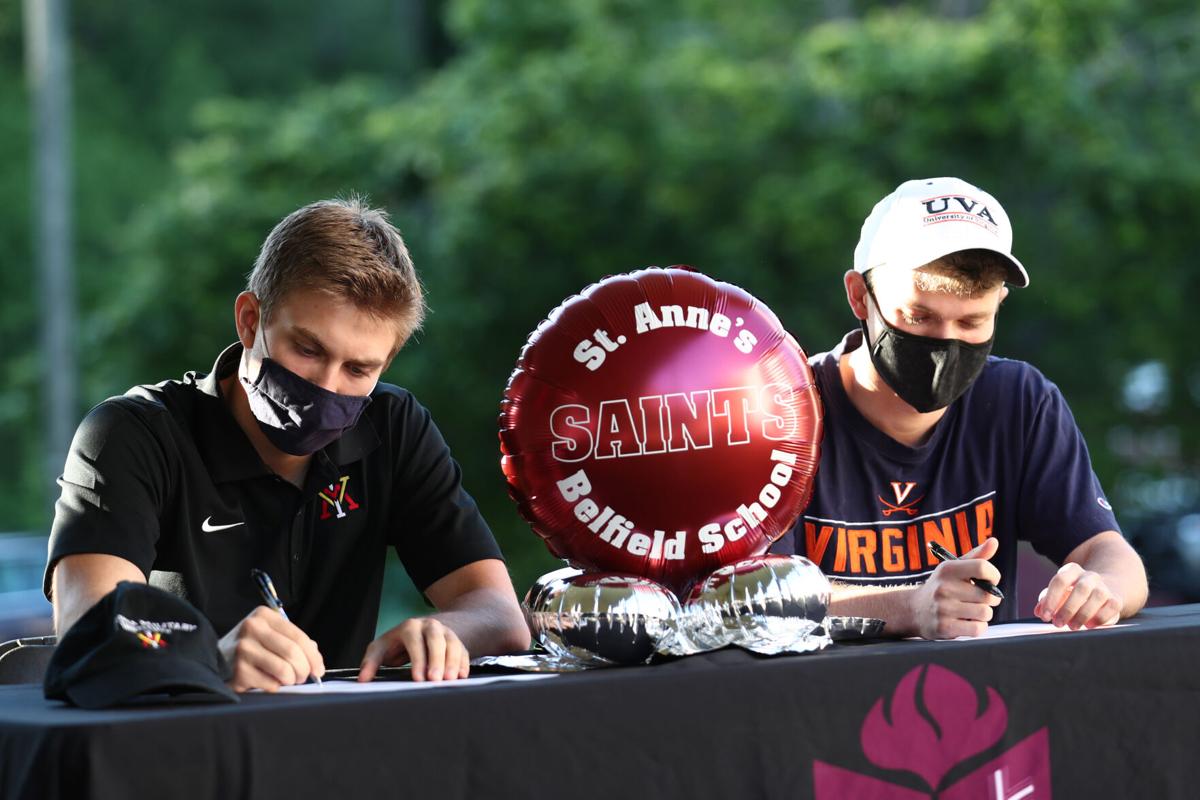 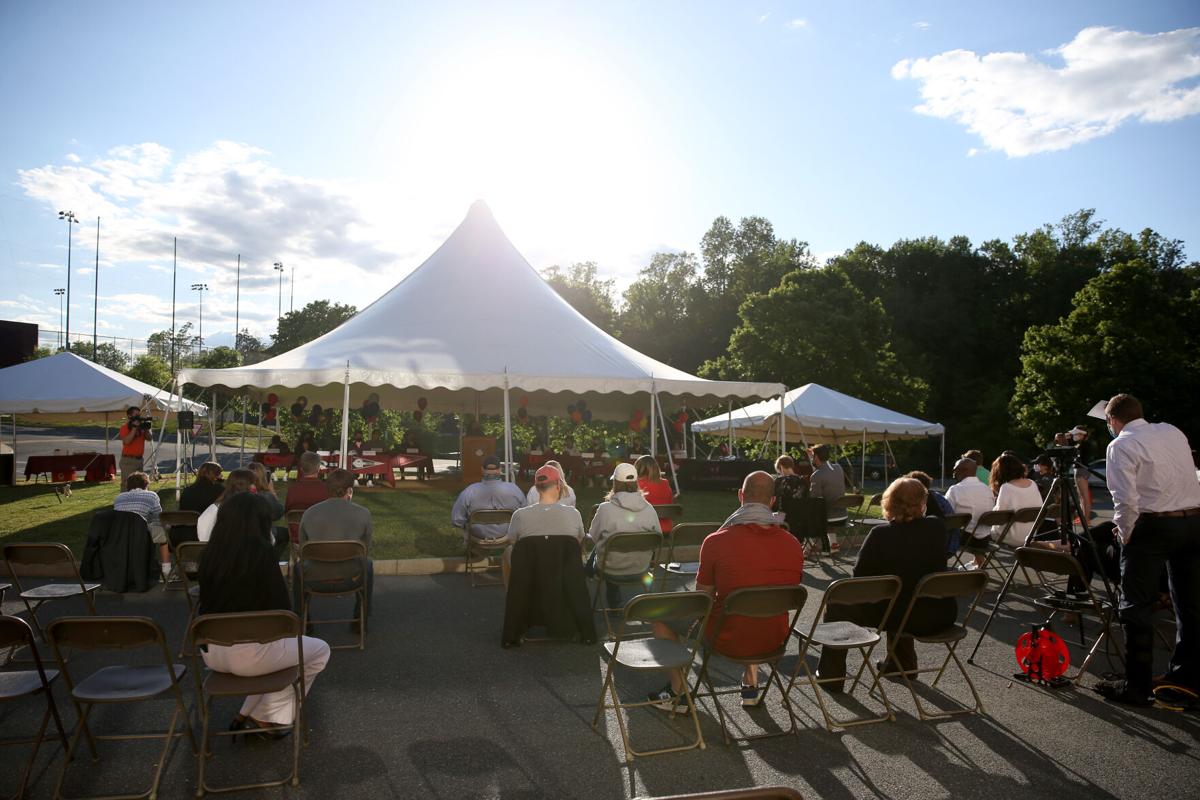 St. Anne’s-Belfield hosts a signing ceremony for their student-athletes on Wednesday.

Injuries and COVID-19 forced Henry van Wincoop to miss out on his final season of high school soccer at St. Anne’s-Belfield.

But the senior forward had a chance to experience some normalcy and solidify his future Wednesday evening as he joined 13 other classmates that took part in STAB’s college sports signing ceremony.

“This day is a huge deal to me,” said van Wincoop, who signed to play soccer at the University of Virginia. “Just being able to celebrate all my hard work is really nice. I’ve dedicated many hours to this sport, so it was nice to have this time to celebrate this accomplishment and it makes all the hard work worth it.”

He’s excited for the opportunity to be a college athlete, particularly for his hometown Cavaliers.

“I expect the next level to be much more intense,” van Wincoop said. “The speed of play will be much quicker, so I’ll have to make quick decisions, on and off the ball. I’m currently recovering from hip surgery, so hopefully I’ll be able close to being fully recovered soon and back playing coming into freshman year. When I’m able to play, some of my goals are to earn a starting spot on the team, win an ACC championship, and of course playing on a top team like UVa, I hope to win a national championship.”

Martin is equally as thrilled for his opportunity to play Division I soccer at VMI.

“I’ve been waiting on this day for a long time,” he said. “This day was always special for me. Throughout high school, I’ve had the opportunity to watch past athletes sign their NLI and it has always made me excited and motivated myself thinking that one day, I would do the same. Now that I have signed, I honestly can’t believe it.”

Like van Wincoop, Martin was a consistent contributor for the Saints throughout his high school career. He’s looking forward to the new opportunity with Coach Max Watson and the Keydets.

“My main goals for next year are to contribute in any way I can to the team,” he said. “I have always been a big team player and I want to continue that mentality. I also hope to improve my leadership skills, on and off the field. Some of my more personal goals and expectations are to have a big role for the team, whether that’s first off the bench or in the starting lineup.”

The recruiting process was unusual for current high school seniors because college coaches were not allowed to recruit in person due to COVID-19 restrictions enforced by the NCAA. That made Wednesday’s accomplishment even more special for Martin and his fellow classmates.

“I was extremely thankful when I got a call from [VMI assistant] Coach [Nick] Regan saying they were interested in me after reviewing some of my film,” Martin said. “I know COVID has not just been tough on myself, it has been especially hard on many others, so being able to gather in a somewhat normal setting to sign really provided me with hope that we are returning to normal.”

Decker and Woods were limited to just one high school football game this season because of the pandemic, but both of their playing careers will continue at the college level.

A two-way standout at linebacker and fullback for STAB, Decker signed to play at Lafayette College in Pennsylvania.

“This day means a lot to me and I know it means a lot to the others that were around me,” Decker said. “I have been working very hard the past four years to get where I am today. [Wednesday’s] ceremony was really nice in a way that I was not expecting to have an event like this during COVID, but the athletics department was able to put together a great ceremony making sure everyone is safe.”

The senior will always value his time with the Saints program.

“It definitely has been an emotional year with only having one game that didn’t turn out the way we wanted,” Decker said. “I was still able to play one last game under Coach Blake, that meant a lot to me. Now knowing that we are starting to come out of these difficult times and come back to sense of normalcy really gets me excited for what the future holds. What this year has taught me is to make the most out of each opportunity because you never know when it could be your last.”

Woods finished his high school football career as one of the most decorated offensive players in STAB program history. The senior running back ranks among the school record holders in nearly every offensive category. Woods will try to continue that success next fall at West Virginia Wesleyan.

“This moment was very special to me,” he said. “I got to be recognized for all my hard work and dedication.”

Woods’ mindset for the next level is simple. He wants to be the hardest worker on the team and will do everything within his power to get on the field and compete as soon as possible and help his team win.

Devin Booker to record a Triple Double in game 2 +1600

Devin Booker to record a Triple Double in game 2 +1600

St. Anne’s-Belfield hosts a signing ceremony for their student-athletes on Wednesday.