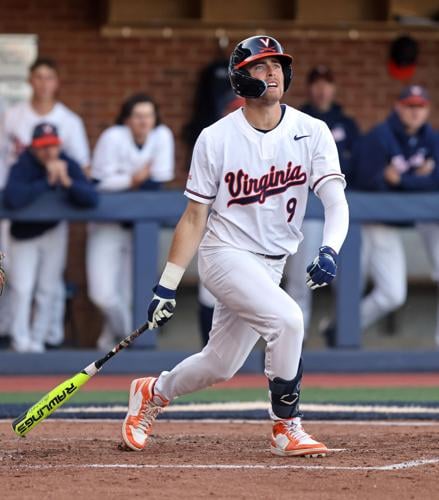 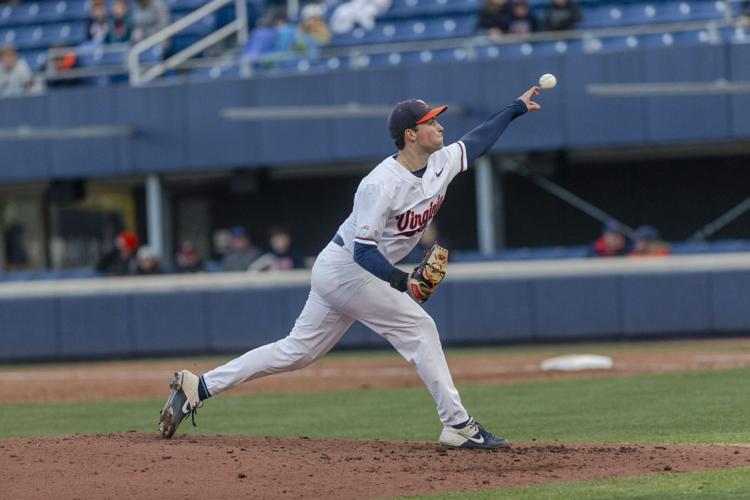 Virginia pitcher Nate Savino delivers during a game against Georgia Tech on April 1 at Disharoon Park. 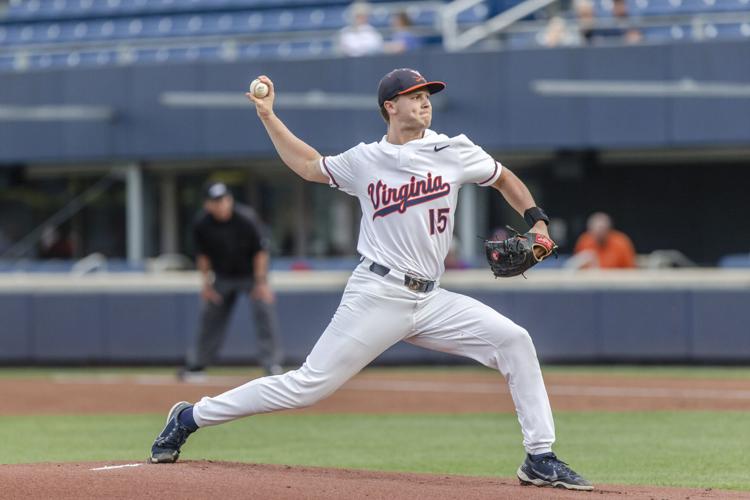 Virginia pitcher Matt Wyatt delivers during a game against VCU on May 4 at Disharoon Park.

The 20-round event begins Sunday night and runs through Tuesday.

In UVa coach Brian O’Connor’s 19 years at the helm of the program, 90 Cavaliers have been selected in the MLB Draft and that includes six picks last year.

Once again, multiple Hoos are likely to be chosen in this go-around. Rounds 1 and 2 as well as a pair of competitive balance rounds are set for Sunday and will air on MLB Network before Rounds 3 through 10 occur on Monday and the last 10 rounds happen on Tuesday.

Here are few Cavaliers, who could hear their names called:

The 6-foot-3, 210-pounder had a strong start to 2022 and an even better finish to the campaign. He logged 6.1 innings and gave up no earned runs to notch a victory in his final start of the year for UVa against Coastal Carolina in the opening game at the Greenville Regional.

“When you get out there and just fill [the strike zone] up, it gives you confidence to keep going the rest of the game,” Savino said after the win against the Chanticleers. “You find the zone and you just continue to pound it and that’s a great feeling.”

And that was the story with Savino this past spring. When he had command, he could be dominant, and when he didn’t, he struggled. His start against Coastal Carolina was the first time he pitched into the seventh inning since March, when he rattled off a stretch of four consecutive starts in which he threw at least six innings.

His best outing came that month at Duke, where he tossed a complete-game shutout, limiting the Blue Devils to just five hits. In the middle of the year, though, Savino had a run of six starts in a row without picking up a win and that coincided with his walk issues.

In spite of the up-down-and-up-again track of his junior season with the Hoos, MLB Draft analysts view Savino as a pitcher with a bright future. The Sterling native and Potomac Falls High School graduate is listed as the 116th best prospect by MLB.com, 63rd best by Prospect Live and 85th best by The Athletic.

He was invited to the MLB Combine at Petco Park in San Diego from June 14-20 and after that, he played in 13 games for the Harwich Mariners in the Cape Cod Baseball League, perhaps, to give scouts another chance to see him play ahead of the MLB Draft. Newell performed well, too, in the CCBL, hitting .289 in 45 at bats with three home runs, a double and a triple.

The left-handed swinging Newell also hit for power with the Hoos this past spring. He launched 12 homers and four doubles, but he also struck out in 34.7% of his at-bats. Beyond his hitting skills, Newell is excellent with the glove in center and can run. He racked up 37 stolen bases over the last three seasons with UVa.

MLB.com lists Newell as the 190th best prospect in this class and Prospects Live ranks him 355th.

Like his teammate Newell, Wyatt attended the MLB Combine in June.

That provided Wyatt, the 6-foot-4 hard-throwing right-handed reliever, a chance to show scouts he was healthy after missing two different parts of the 2022 season with the Cavaliers due to injury.

He was excellent in 2021, though, serving as a reliable, trusted force out of the bullpen for O’Connor during UVa’s run to the College World Series. Across 16.2 postseason innings in ’21, Wyatt tallied 26 strikeouts. He struck out eight batters in consecutive appearances against South Carolina and Dallas Baptist that postseason.

Prospects Live ranks him as the 433rd best prospect.

His move from the starting rotation to the bullpen worked well this spring and Neeck was impactful as a left-handed reliever for the Hoos.

Shortly after the switch, Cavaliers pitching coach Drew Dickinson said Neeck’s fastball velocity range jumped from between 87 and 90 mph as a starter to 92 to 96 mph as a reliever. Neeck struck out 32 batters in 18.1 frames as a reliever compared to just 25 punch outs in 24 innings as a starter.

“That’s a different person,” Dickinson said then. “That’s letting it go and it’s electric. It’s shutdown and it’s strikeouts. It’s all of those things against both lefties and righties.”

Prospects Live lists Neeck as its 446th best prospect. He pitched briefly for the Hyannis Harbor Hawks in the CCBL earlier this summer.

And don’t forget about…

In his final go-around with the Cavaliers, left fielder Alex Tappen proved he could sustain his success throughout a full season. His .366 average to go along with a .421 on-base percentage, 13 homers and 15 doubles showed he’s worth a look even as an older player who wrapped up his college career.

On the other end of the age spectrum, UVa commit Jack O’Connor, a 6-foot-5 right-handed pitcher from Bishop O’Connell High School in Arlington is well thought of. He’s rated as MLB.com’s 126th best prospect for this draft while The Athletic ranks him 86th and Prospects Live slots him at 106th.

“We’ll get a chance when we scrimmage here this Saturday, to get a real picture of who wants to tackle and who can execute at a really high level."

We continue our UVa football opponent preview series with Old Dominion, which will bring a new-look offense to Scott Stadium in September.

Our Virginia football opponent preview series continues with Duke, which has revamped its strength and conditioning program under new head coach Mike Elko in an effort to be more competitive.

A1 Minute! August 12, 2022: 500 volunteers stuffed backpacks for kids heading back to school; New president of VMFA Board of Trustees elected; Top 5 this weekend [A1]

Hokies coach Brent Pry having fun — and it shows

Hokies coach Brent Pry having fun — and it shows

Virginia pitcher Nate Savino delivers during a game against Georgia Tech on April 1 at Disharoon Park.

Virginia pitcher Matt Wyatt delivers during a game against VCU on May 4 at Disharoon Park.