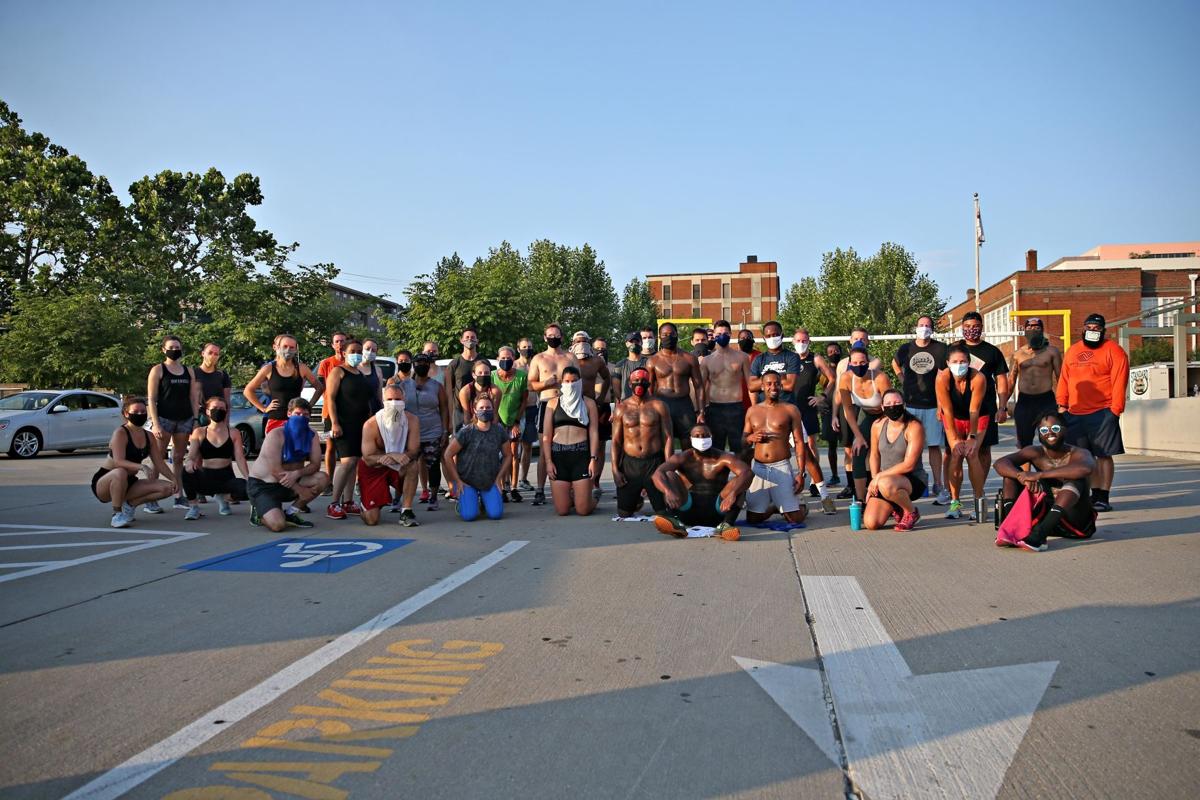 Growing larger every week, the ProlyFyck Run Crew groups together for a photo after every run to document attendance. The running group meets Monday, Wednesday and Friday mornings at 6 a.m. in front of The Jefferson School. See more photos at DailyProgress.com. 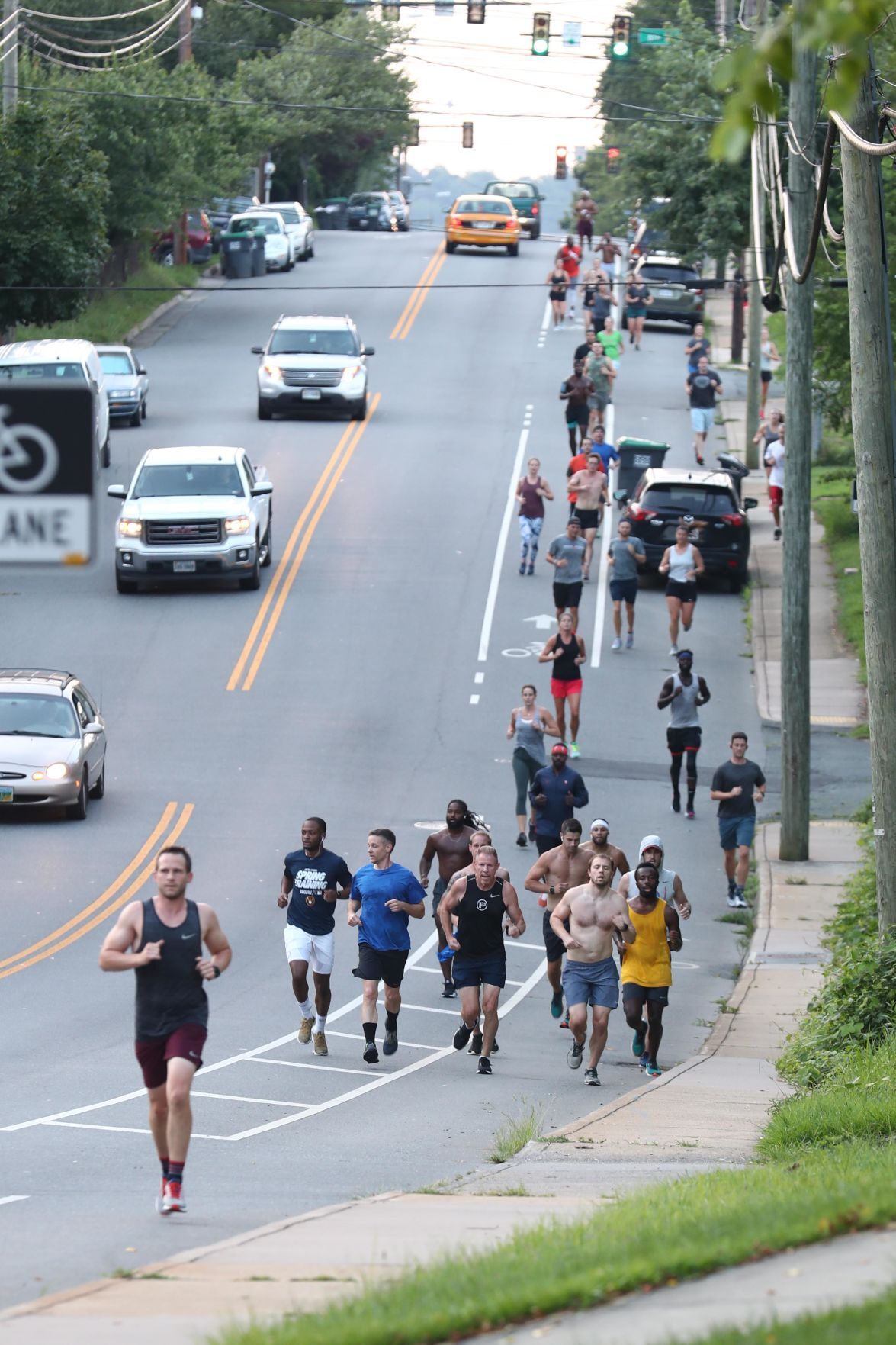 ProlyFyck Run Crew participants run down Elliott Avenue towards First Street on Friday morning in Charlottesville. The running group meets Monday, Wednesday and Friday mornings at 6 a.m. in front of The Jefferson School.

Wes Bellamy stands in the middle of a group of roughly 40 people Friday morning, sharing instructions for Monday’s four-mile run. He breaks down the different running groups and starting times.

“The last group, excuse me, the C group — the cruisers — will leave at 6:15,” Bellamy, the former vice mayor of Charlottesville, said with a smile.

He laughs as people, including Virginia men’s lacrosse head coach Lars Tiffany, excitedly call out “cruisers!” in reference to the C group. Those in the group embrace their speed, which pales in comparison to some of the fastest runners in the group.

Every Monday, Wednesday and Friday the running club, known as the ProlyFyck Run Crew, meets up at The Jefferson School to run a few miles through Charlottesville neighborhoods. The name of the club, which is pronounced “prolific,” pays homage to a Nipsey Hussle lyric from his album “Victory Lap.” The group wants to play a role in building a world where everyone — regardless of their background — can be “prolyfyck.”

Despite the speed differences between participants, the runners who set the pace pause roughly every mile to wait for the C group and others to catch up.

“That’s really a microcosm of what we’re trying to do not only in the community, but we do it through running,” Bellamy said. “Nobody is left behind. No man, no woman is left behind. It doesn’t matter if you’re a super-fast blazer or you’re a jogger or you’re a person who just walks. We’re not leaving anybody.”

As the country grapples with a deadly pandemic that encourages social distancing, as well as social unrest following the death of George Floyd, finding community can be challenging. The club opens an opportunity for those in Charlottesville to join a growing community.

“It’s amazing how together this group truly is,” Tiffany said.

It’s a diverse group of runners. The group of 40 or 50 people features white runners, Black runners, female runners and male runners. There’s even diversity through the age group with college-aged runners as well as runners over 50.

“At first, it’s a little intimidating because I wasn’t a runner,” Hawkins said. “I always think of myself as a sprinter, but it’s just a new challenge. I don’t play football anymore, so it’s something I like forward to – challenging myself.”

Hawkins enjoys the challenge, the health benefits and the strong sense of community within the group.

That togetherness extends beyond the people in the group to the route the crew takes. Everyone runs through public housing sites in the community. That’s by design.

“More than anything, we just want to show — like you look out here, Black folk, white folk — but specifically for the people who don’t spend a lot of time in the public housing sites, we want to show them another side of Charlottesville,” Bellamy said.

Residents in the public housing sites embrace the running club, which starts its runs around 6 a.m. As the runners make their way through the neighborhoods, people come outside to wish the runners well.

“It’s an amazing thing,” David Johnson, a 29-year-old Charlottesville resident, said. “People are literally up at 6 a.m. cheering us on.”

Occasionally, the group takes part in a night run. While those haven’t been frequent this year, that atmosphere may even top the morning runs.

“You have those people out there hanging out with their friends and stuff, and they see us running through,” James Dowell, a 26-year-old Charlottesville resident, said, “and it’s like a block party.”

By running through the community, it opens the eyes of some runners to the public housing situation in Charlottesville. They see new neighborhoods and better understand the community.

Those in the neighborhoods can also see the runners and learn more about the group and the community it creates. The group welcomes runners of all ages and races. Regardless of skill level, the group is happy to have new additions.

“Running through these neighborhoods, a lot of times they’re the people who can’t afford gym memberships, and you don’t need a gym membership to run outside,” Johnson said.

After the club’s latest Friday run, people lingered in the Jefferson School parking lot. They shared conversations and despite most runners being drenched in sweat, nobody was in a hurry to get home to shower.

The group posed for its customary team photo, excited to have a newspaper photographer on scene to take it. Within hours, the photos were posted on social media as members of the group eagerly encouraged others to join the running movement.

“When you talk about truly bringing a community together, what better way than having 40-50 people — socially distancing and with masks of course — getting together getting to know each other,” Bellamy said. “You break down some of the stigmas.”

For Bellamy, Tiffany and others, one of the best ways to form relationships with other people is through athletic activity. They’ve found plenty of others in the Charlottesville area agree. The result is a growing group of friends who meet three mornings a week to watch the sunrise as their feet hit the concrete.

“This is just our way of building community,” Bellamy said.

The ProlyFyck Run Crew meets Monday, Wednesday and Friday mornings at 6 a.m. in front of The Jefferson School. The route flows through predomi…

Growing larger every week, the ProlyFyck Run Crew groups together for a photo after every run to document attendance. The running group meets Monday, Wednesday and Friday mornings at 6 a.m. in front of The Jefferson School. See more photos at DailyProgress.com.

ProlyFyck Run Crew participants run down Elliott Avenue towards First Street on Friday morning in Charlottesville. The running group meets Monday, Wednesday and Friday mornings at 6 a.m. in front of The Jefferson School.