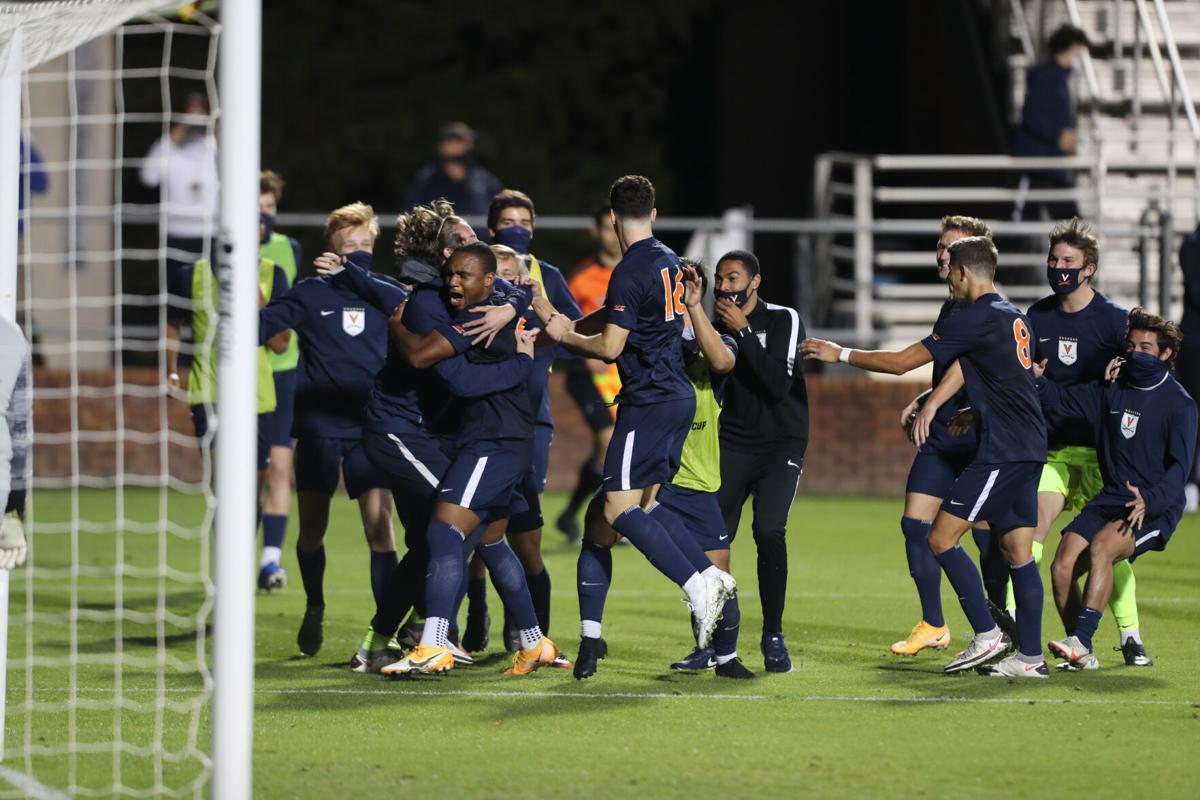 Members of the Virginia men’s soccer team celebrate after their overtime win over Louisville on Friday at Klöckner Stadium. 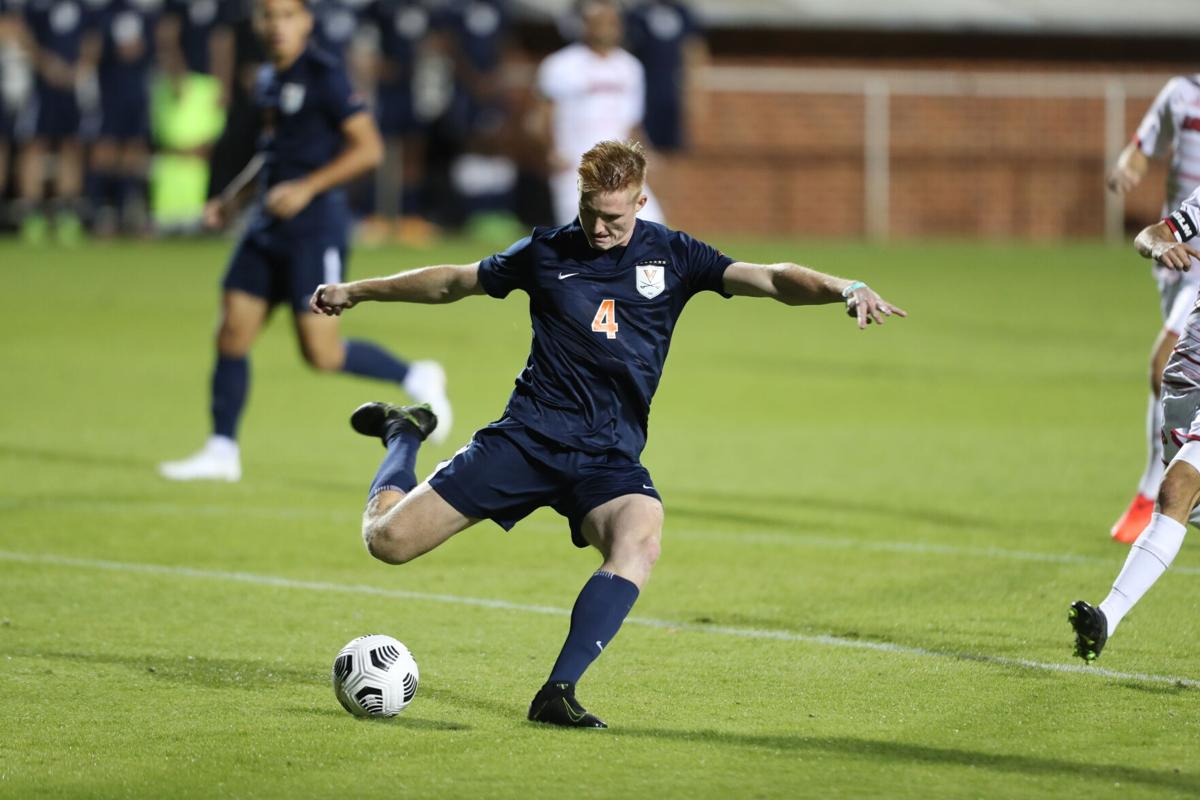 Virginia's Reed Kessler prepares to pass the ball during the Cavaliers' 2-1 win over Louisville on Friday at Klöckner Stadium.

After a pair of postponed scrimmages and a canceled regular season match due to COVID-19 issues affecting opposing teams, the Cavaliers finally played Friday, and they received plenty of playing time.

In its first game back after a long layoff, UVa battled Louisville late into the night. It took double overtime, but the Cavaliers (1-0, 1-0 ACC) won their first match back on the pitch 2-1 over the Cardinals (1-3, 1-1 ACC).

“Hey, listen, we came out of this with three points,” Virginia head coach George Gelnovatch said. “We did not deserve it, to be honest with you, but we got fitness out of it. We’re gonna get a little sharper by playing this game. It meant something. It’s just gonna help us, and then the fact that we got three points probably when we shouldn’t have, tells me a little something about this team.”

Philip Horton’s penalty kick goal pushed the Wahoos over the top in the second overtime. The shot came against freshman goalkeeper Osmar Chevero, who had to take over for starting goalie Jake Gelnovatch, the son of UVa’s head coach. Jake Gelnovatch argued the call that led to the penalty kick and earned a red card.

It was chaotic for just about everyone. Well, except for Horton.

“Honestly, I didn’t even know there was a red card,” Horton said. “I thought they brought the goalie in to try to save the PK. I didn’t notice it, just tried to focus.”

Excellent focus helped Horton cap off a night of ups and downs for a Virginia team featuring plenty of new faces after last season’s run to the national championship match.

The Cavaliers appeared rusty in the opening half.

Louisville moved goalkeeper Colin Shutler out of position, setting up an empty goal for Louisville’s Carlos Sanchis in the first 10 minutes. Unfortunately for the Cardinals, Sanchis smacked the ball over the crossbar.

A handful of minutes later, Shutler came up in the box and made an impressive save. The Cardinals nearly scored again in the 18th minute, but the shot missed to the right.

Eventually, UVa settled into the match. George Gelnovatch’s team showed glimpses of the strategy that worked well last season, controlling possession and looking for the right time to attack. The increased possession helped the Wahoos enter halftime with the match tied at zero despite a slow start.

Virginia looked like a different squad to open the second half.

The Cavaliers started to connect on passes, pressuring Louisville and forcing the Cardinals to make smart defensive plays. A series of passes led to the first goal of the night.

Redshirt freshman Isaiah Byrd fed a pass on the right side into graduate student Joan Gibert. The newcomer from Spain spun around before dishing the ball into Nathaniel Crofts in the box. Crofts ripped a shot past Jake Gelnovatch to give UVa a 1-0 lead.

On a night with many new faces contributing, a familiar one scored the goal. The passes that led to the goal, however, came from newcomers.

“To be honest, not a lot of great performances,” George Gelnovatch said of the newcomers. “Again, because of the lack of games and sharpness.”

UVa’s head coach added that he feels the team is “young and talented” and just needs more games to show more consistent excellence throughout a match.

The lead created by Crofts’ goal would be threatened multiple times by the Cardinals.

A shot in the 67th minute from Ayden Nocus seemed destined to tie the game. He came in from the left side with Shutler on the right side of the goal, but UVa’s goalkeeper jumped back toward the middle and stopped the low shot.

Shutler added another save to his tally in the 72nd minute, this time diving to his left to knock a shot from Pedro Fonesca aside.

Unfortunately for the Wahoos, Fonesca found the back of the net later in the match. With UVa nearly ending the night with a victory, Fonesca put the ball in the upper left corner of the net from the right side of the box with just 45 seconds remaining.

Neither team found the net in the first overtime, but the Cardinals came close on numerous occasions early in the second extra period. Shutler and the defense turned aside a few decent chances.

Eventually, however, it was Virginia that earned the best shot of the overtime. The Cavaliers earned a penalty kick on a Louisville foul in the box. The call infuriated Jake Gelnovatch, who earned a red card for arguing.

UVa’s Horton took advantage of the new goalkeeper and the prime scoring chance, pushing the ball into the bottom right side of the net.

“It’s never an easy situation to be in,” George Gelnovatch said. “Golden goal, sudden death in overtime, emotions flying on both sides, red card and to make the penalty, I give him a lot of credit for taking it and making it.”

It wasn’t easy, nor was it perfect, but after a long time away, it was soccer and it was a win for the Wahoos.

Members of the Virginia men’s soccer team celebrate after their overtime win over Louisville on Friday at Klöckner Stadium.

Virginia's Reed Kessler prepares to pass the ball during the Cavaliers' 2-1 win over Louisville on Friday at Klöckner Stadium.