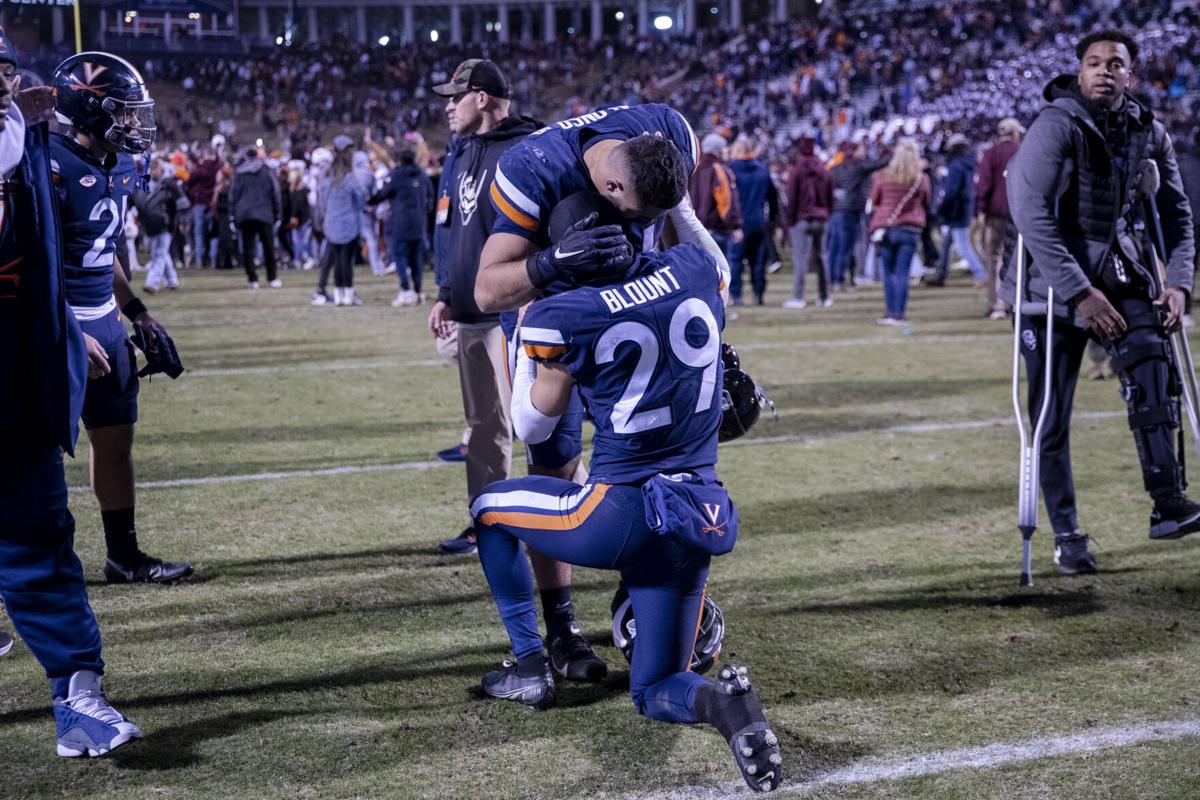 Virginia free safety Joey Blount (29) is hugged by a teammate after the Commonwealth Cup against the Virginia Tech Hokies on Saturday at Scott Stadium. 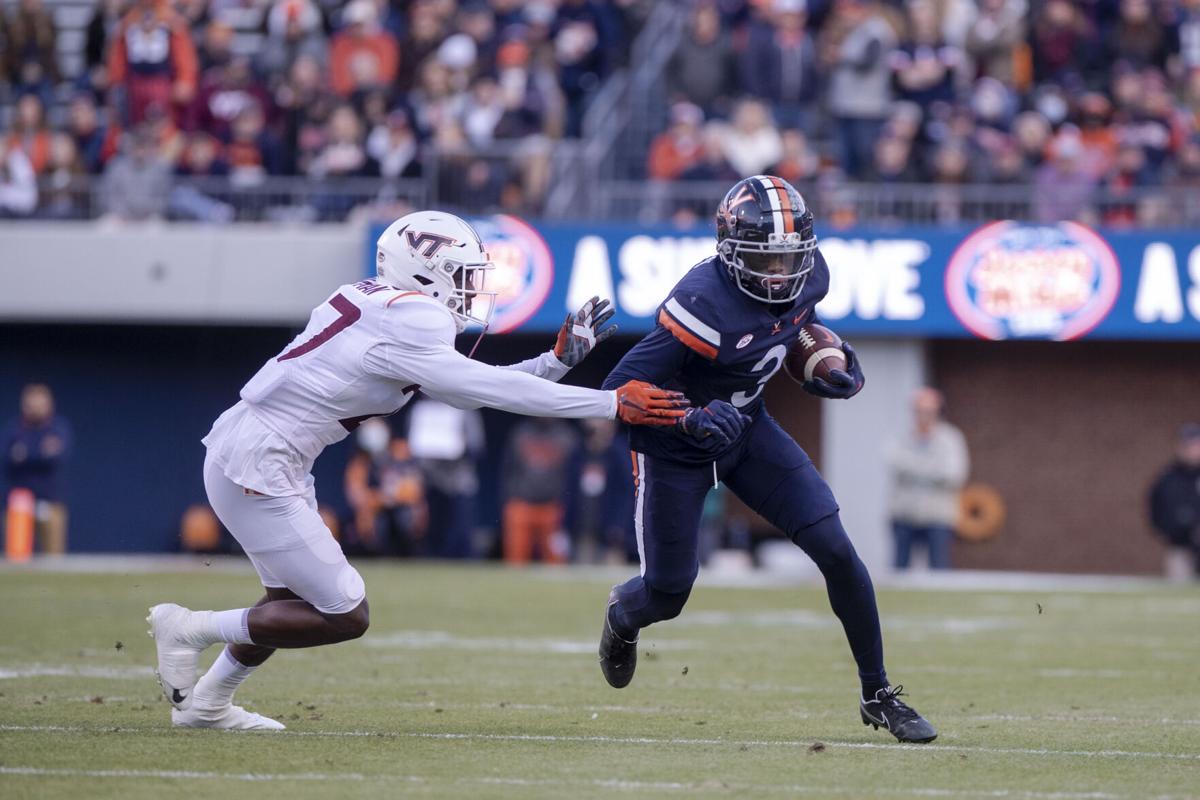 Virginia wide receiver Dontayvion Wicks, right, runs the ball during the Commonwealth Cup against the Virginia Tech Hokies on Saturday at Scott Stadium.

The Cavaliers have lost their last four, including back-to-back heartbreaking setbacks against Pittsburgh last week, which put the Hoos out of Atlantic Coast Conference Coastal Division title contention, and to rival Virginia Tech on Saturday.

“It’s a sour taste,” UVa quarterback Brennan Armstrong said. “This was an important one to us.”

But the Cavaliers’ season isn’t over even though their most important games of the year are behind them.

Armstrong and UVa coach Bronco Mendenhall said the Cavaliers still have aspirations to finish the year with a win.

“I think we just try to forget about it, we have time, people have to deal with it, but we have a lot of time for that. Once we get back practicing, I think we’re just going to be excited to play at a new venue against a different team. We’ve got to get this last one. We have to at this point. We’ve got to end the season on a good note.”

Said Mendenhall: “It takes time just like any anything, especially when you put a lot into it and you come up short. Bowl games matter, and playing them every year matters, and winning them matters and that’ll be the next thing.”

Some potential destinations include the Military Bowl in Annapolis, Md., the Sun Bowl in El Paso, Texas, the Pinstripe Bowl in New York and the Duke’s Mayo Bowl in Charlotte.

Both Armstrong and wide receiver Dontayion Wicks set records during the Cavaliers’ loss to the Hokies.

Wicks’ three catches for 55 yards gave him the school single-season record for receiving yards. He now has 1,203 receiving yards this season, which propelled him past former record holder Herman Moore.

Too much on the ground

Mendenhall said his team gave up too many rushing yards to the Hokies.

“Especially in a close game,” Mendenhall said, “because it allows clock to be eaten up and the game kind of moves with the team that can run it. They have more control of the game.”

Virginia Tech tallied 320 yards on the ground, spurred on by long runs from running back Raheem Blackshear and quarterback Braxton Burmeister.

Blackshear had a 50-yard run in the third quarter that set up the game-tying score and Burmeister netted a 71-yard scamper in the first half.

“They’re a running football team,” UVa linebacker Elliott Brown said, “and our job was to get them in passing situations and put pressure on ‘em like we did, and when we did get in passing situations, we did well. But they just had a few big plays that popped loose on QB runs.”

Transfer Mir McLean, who was making her UVa debut, was the lone bright spot in Cavaliers' blowout loss to Virginia Tech.

He aspires to reach the NFL, and John Paul Flores said his best chance to do so is by spending his final two seasons of college football at Virginia.

Virginia free safety Joey Blount (29) is hugged by a teammate after the Commonwealth Cup against the Virginia Tech Hokies on Saturday at Scott Stadium.

Virginia wide receiver Dontayvion Wicks, right, runs the ball during the Commonwealth Cup against the Virginia Tech Hokies on Saturday at Scott Stadium.