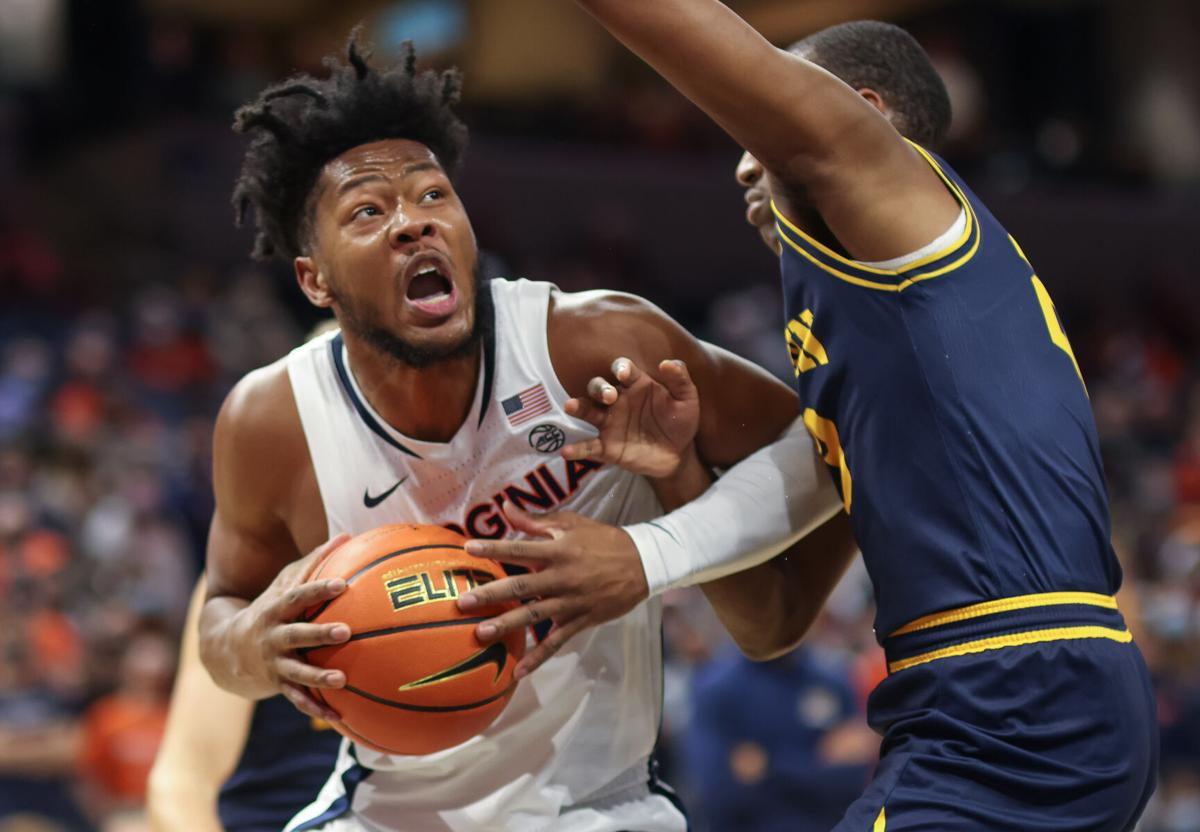 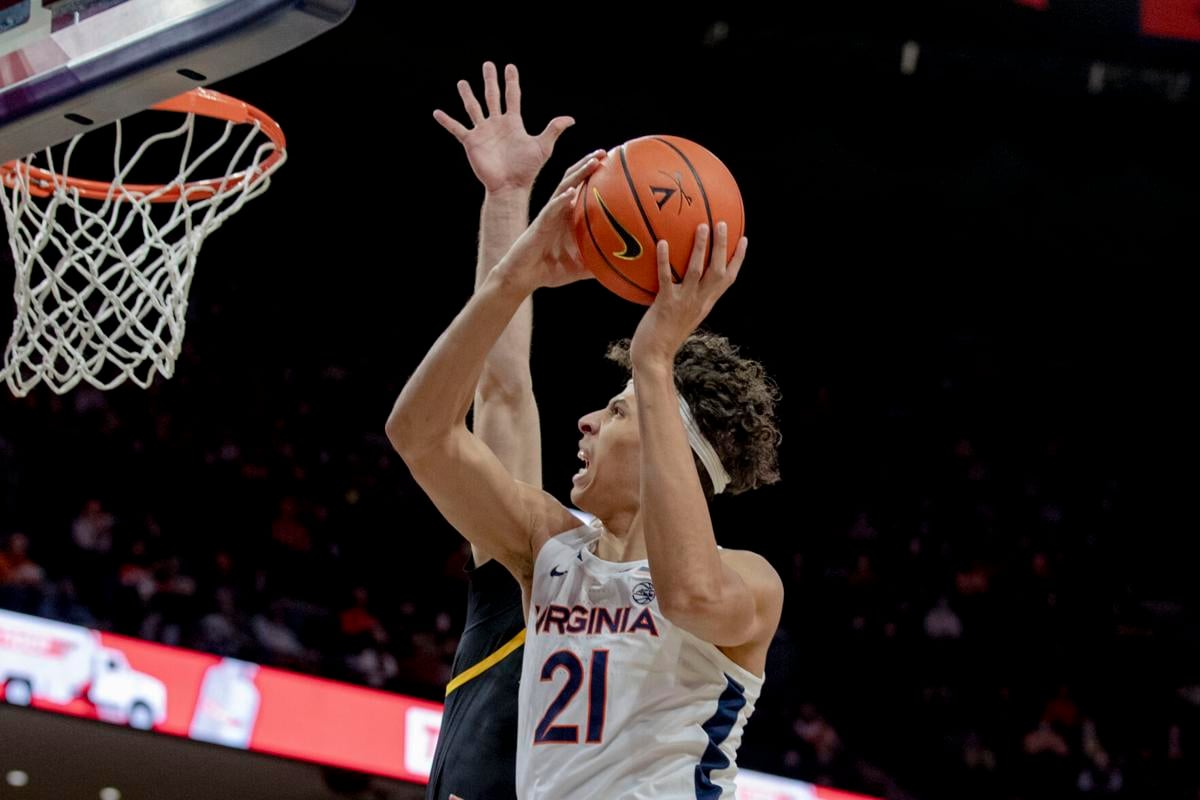 Virginia forward Kadin Shedrick goes up for a shot during the Big Ten/ACC Challenge against the Iowa Hawkeyes at John Paul Jones Arena.

Jayden Gardner’s only other appearance at the Dean Smith Center is unforgettably etched in his memory.

He scored 30 points and grabbed 13 rebounds — one of 70 career double-doubles as a prep star — in the 2018 North Carolina High School Athletic Association 4A state title game.

Gardner and the Cavaliers (9-5, 3-1 Atlantic Coast Conference) are aiming for their third straight victory as they head to North Carolina to face the Tar Heels (10-4, 2-1) on Saturday for a 1 p.m. tipoff in Chapel Hill. That’s about 40 miles west of where Gardner grew up and went to high school at Heritage in Wake Forest, N.C.

He said he’s expecting a contingent of 20-plus family members and friends in the stands, and forward Kadin Shedrick, who is from nearby Holly Springs — about a 30-minute ride to the Smith Center — said he’ll have close friends and family there, too. Shedrick said those he knows have been going through his parents for tickets.

Both natives of the ACC epicenter are eager for their first of a few homecomings over the next month. UVa plays at N.C. State on Jan. 22 and at Duke on Feb. 7.

“I grew up around UNC, Duke, N.C. State and all that stuff,” Shedrick said. “I saw them on TV all the time, but this will be my first time actually playing in the Dean Dome.

“And I never really had a team down there,” he said with a grin. “I just kind of watched the games. The rivalries were always fun to talk about in school because we had the N.C. State fans, the UNC fans and the Duke fans, and they’re all just going after each other.”

Shedrick redshirted two seasons ago and witnessed from the bench during the Cavaliers’ last trip to UNC when they knocked off the Tar Heels, 64-62, on former guard Tomas Woldetensae’s game-winning 3-pointer at the buzzer.

For Shedrick, a third-year sophomore and 6-foot-11 rim-protector, as well as Gardner, a transfer from East Carolina, they’ve each had to make progress uniquely in their respective careers to become fixtures in the starting lineup for this UVa bunch and in order to play in meaningful bouts like the one they’re anxiously anticipating against the Tar Heels.

“I just took it step by step and it’s been a dream,” Gardner, who noted he was born in Duke University Hospital and was a big fan of the Blue Devils as a kid, said. “You dream about playing in the ACC in these types of games and these types of matchups, so I’m living out my dream right now. I’m very excited.”

Out of high school, Gardner earned one high-major scholarship offer and it was from Penn State. He considered VCU, Saint Joseph’s and College of Charleston ahead of committing to and signing with ECU, where he said he always efforted to improve his skills one year after the next.

Gardner averaged 16.3 points and 8.5 rebounds per game as a freshman, and said that was without the versatile game he has now. He primarily scored near the basket then, but the following season, Gardner topped the American Athletic Conference in scoring.

“Sophomore year, I got my jump shot way better,” he said. “Then, junior year I expanded it and now that I’m here, I’m working on having to play both sides all game, so it’s a great challenge and each year has been developing a different side of my game. It’s been a tall challenge, but I’m always excited for new challenges and I’ll keep attacking it.”

His 15.4 points per game leads the Cavaliers this campaign, and his game-high 23 at Clemson on Tuesday helped the Hoos beat the Tigers for their second road win in a row after taking down Syracuse on New Year’s Day. Gardner had 15 points, four rebounds and four assists against the Orange.

His skills have translated well to the ACC.

And even though when Gardner was without any offers from schools in the league, or at ECU and never envisioned himself starring in the conference he watched his whole life, he said he never doubted his ability to play well for the Cavaliers once he decided to transfer to UVa during the offseason.

“I have that confidence in me. I’ve worked too hard at this game to not think highly of myself,” Gardner said.

Shedrick didn’t have the instant success Gardner did as a freshman. Shedrick said he tried to absorb as much knowledge as he could during his first year with UVa while redshirting to be more prepared whenever his game action would come. He said the biggest lesson Cavaliers coach Tony Bennett and his staff taught him during that season was to watch and understand how physical the game is inside and how he needs to be ready for that every time he takes the floor.

It inspired Shedrick to put on more muscle in the weight room.

Coincidentally, Shedrick said he first learned that might be needed at the college level when his Holly Springs High School team met Gardner’s Heritage squad years ago. Shedrick said he was about 6-foot-8 and still growing then, but weighed only about 170 pounds while Gardner — a year ahead of Shedrick in school — was just slightly smaller than the 6-6, 246-pound frame he plays at now.

“I wouldn’t call them good battles. It was before I gained weight,” Shedrick said with a chuckle. “It didn’t go well.”

Last winter, Shedrick appeared in 11 games, was sick at times and didn’t get fully acclimated or comfortable again until this past preseason.

He’s become an excellent complement to Gardner in the frontcourt, strengthening the Hoos’ defense. Shedrick’s 40 blocks are the second most in the ACC. He is averaging 6.8 points per game.

“It feels a lot better to feel like you’re actually contributing to a win in the game,” Shedrick said. “All of our guys contribute every day in practice, but it’s a whole other feeling when you actually get to score the ball or when you’re blocking shots.”

Shedrick said a consequence of having not played in many games over the past two seasons was that the most difficult task he had to overcome was timing his block attempts correctly. He was a natural shot-blocker in high school, averaging four blocks per game as a senior, but said he couldn’t do it as easily earlier this season.

He’s figured it out since, though, tallying five in a November win over Providence and 11 over the last three games.

“And another thing with the shot blocking is having teammates that trust me,” Shedrick said. “They’re going to have to know I’m coming on their backside and they have to trust that I’m going to come block the shot. They don’t try to jump and block it and they don’t foul their guy.”

One of those undoubting teammates in Shedrick is Gardner, of course, and both said they’ve enjoyed playing with each other and seeing the expansion of the other’s game since they were high school stars in North Carolina.

Shedrick said Gardner’s improvement as a shooter has made him so dangerous on offense and that he’s picked up UVa’s Pack Line defense well.

And on Saturday, they’ll work in unison to try to give the Cavaliers a chance to upend the Tar Heels in a venue so close to home.

“It means a lot,” Gardner said, “just because it’s the people that have been watching you and supporting you your whole life. They watched you in high school and now they’re finally seeing you on the big stage. It’s nice to see it all come full circle and to be able to come back home and play. You never take playing the game for granted and you for sure never take for granted playing in front of your loved ones.”

Several names to watch in the transfer portal as the Virginia football team looks to replenish its roster.

It appeared as if Virginia was on its way to a fourth win the last five games until the Cavaliers collapsed in the second half.

Lafayette transfer tight end Steven Stilianos will be in Charlottesville for an official visit with the Cavaliers beginning Friday.

Virginia forward Kadin Shedrick goes up for a shot during the Big Ten/ACC Challenge against the Iowa Hawkeyes at John Paul Jones Arena.