No. 3 UVa women’s soccer team suffers first defeat of season against No. 14 Penn State
0 comments
Share this
1 of 2 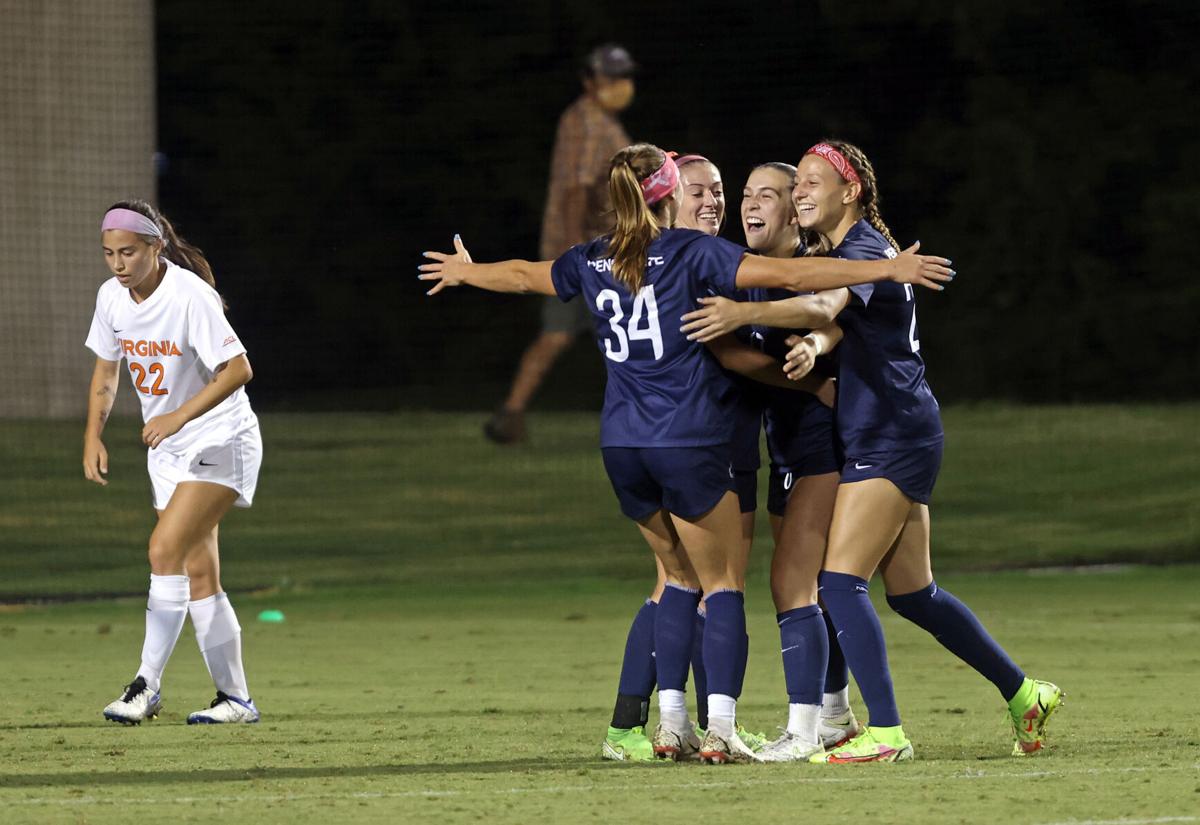 Penn State players react to a first-half goal against Virginia during the game Thursday at Klöckner Stadium. 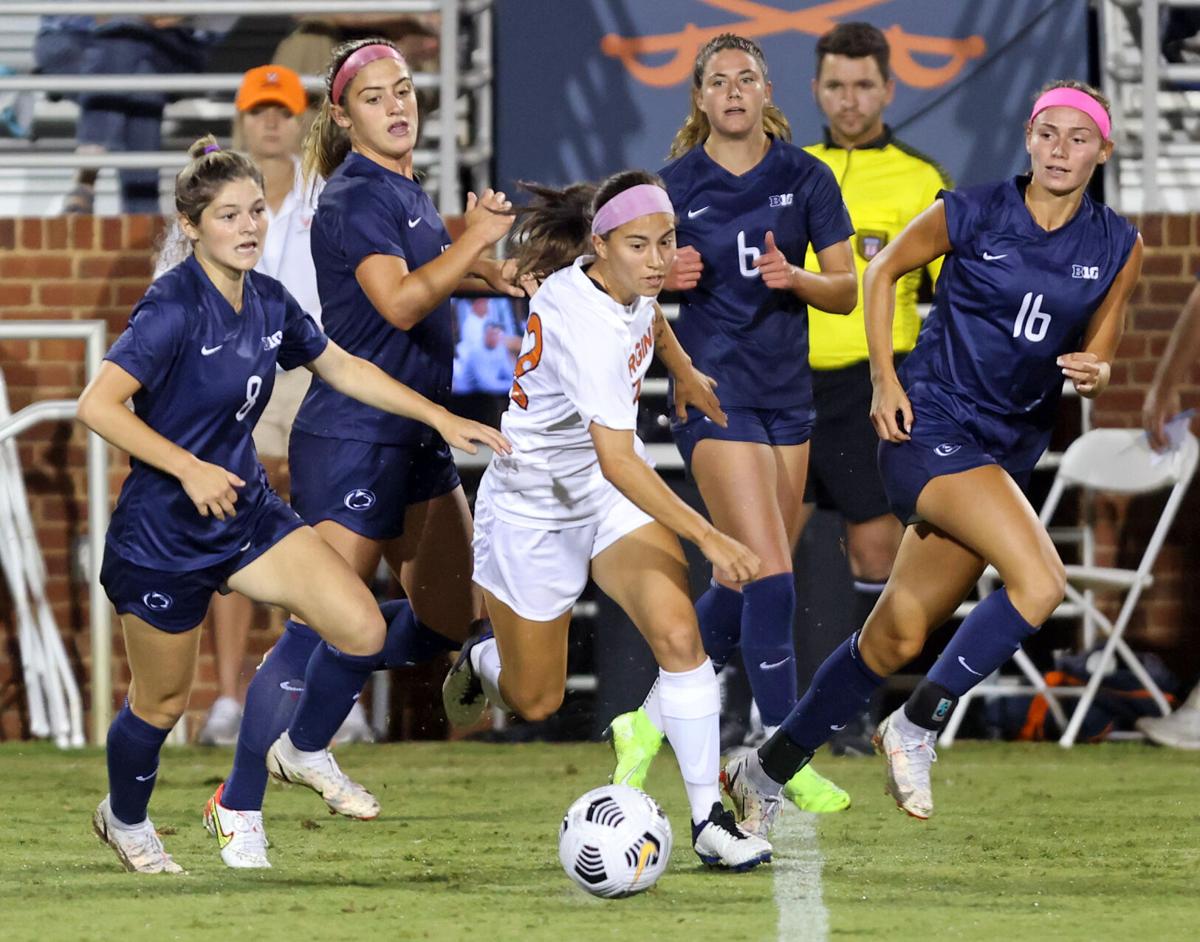 The Virginia women’s soccer team suffered its first defeat of the season Thursday night while uncharacteristically struggling on defense.

No. 14 Penn State scored four goals, including three in the first half, to take down No. 3 UVa by the final score of 4-2.

“We weren’t sharp,” Virginia head coach Steve Swanson said. “I thought we needed to be sharper than we were. I thought there were moments, but against a team like this, it’s not good enough.”

The loss provided Virginia some insights as to where it can still improve in future weeks. Normally stout defensively — five of the team’s six wins have been shutouts — the Cavaliers (6-1) yielded four goals to the Nittany Lions. While Penn State (5-1) was aggressive offensively, UVa players and coaches weren’t pleased with the occasional ease with which the Nittany Lions scored.

“There were a couple goals that I thought were more our doing, but they buried them,” Swanson said. “Good teams do that.”

The Cavaliers looked vulnerable in the first half, showcasing rare moments of sloppiness.

With the score tied 1-1, Laney Rouse attempted to pass the ball back to goalkeeper Laurel Ivory. Rouse didn’t hit the ball nearly as hard as she hoped, stubbing the pass. The mistake set up a one-on-one opportunity for Penn State’s Payton Linnehan, who beat Ivory for a goal.

Several veteran players went over to Rouse to give her words of encouragement before the end of the half and during the halftime break. The team wasn’t interested in finger pointing, even as it made miscues.

“Those things happen in a game,” Swanson said. “You don’t want them to happen, but the mentality is you have to forget about those things.”

Virginia trailed 3-1 at the break, yielding three first-half goals for the first time since a 4-3 loss to Florida State last fall. That’s also the last time UVa allowed four goals in a match.

It was unusual to see the Cavaliers struggle defensively after they had allowed just one goal all season entering the match. The performance came against a quality opponent, but it was also uncharacteristic of a team that prides itself on defensive excellence. Swanson seemed encouraged that many of the mistakes are fixable.

Costly turnovers gave Penn State a few quality transition opportunities, and the Nittany Lions cashed in on those chances.

“When you turn the ball over as much as we did in the buildup, you’re playing right into their transition, and that was a real problem, especially in the first half for us,” Swanson said.

Given the championship quality of the Cavaliers, they didn’t wilt, even when facing their first deficits of the season.

After Penn State’s first goal gave the Nittany Lions a 1-0 lead, Diana Ordonez answered with an equalizer two minutes later. Ordonez also added the first goal of the second half, pulling Virginia within 3-2 when she headed a perfect pass from Alexa Spaanstra into the net.

Unfortunately for UVa, Schlegel scored again about four minutes after Ordonez, putting the Wahoos down 4-2 with just over 25 minutes left.

Offensively, even without forward Rebecca Jarrett, who is out for the season with an injury, the Cavaliers looked strong. Spaanstra created well, and Ordonez was her usual self, finishing near the net. That’s a positive sign moving forward.

The schedule requires consistent excellence from the Cavaliers, who often face ranked teams with national title aspirations. Thursday’s loss likely represents a bump in the road for one of the most talented teams in college soccer.

It’s also a reminder that the Cavaliers, even with their defensive talent, need to be sharp to consistently post clean sheets and pick up victories.

“There’s no question we have to be better,” Swanson said.

Penn State players react to a first-half goal against Virginia during the game Thursday at Klöckner Stadium.