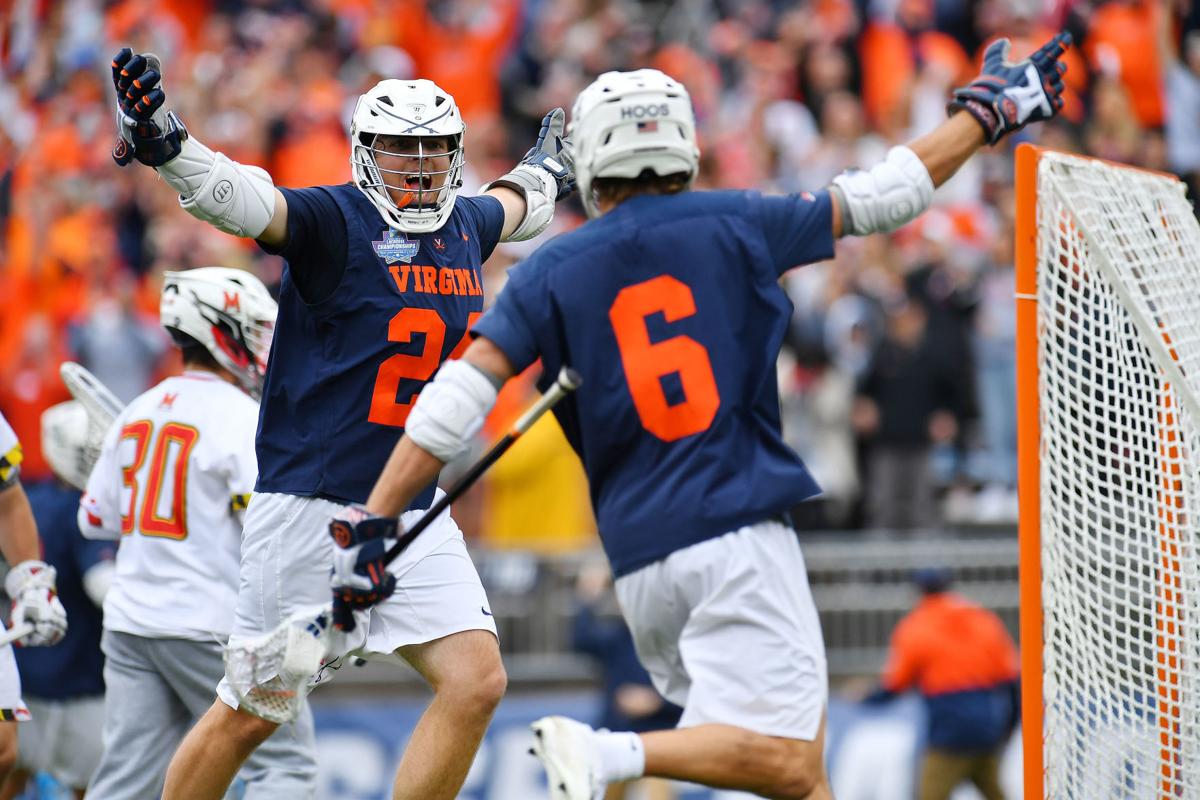 The Richmond Times-Dispatch EAST HARTFORD, CT—MAY 31: Virginia attack Payton Cormier (24) and mid Dox Aitken (6) celebrate a goal against the Maryland Terrapins during the Division I Men’s Lacrosse Championship held at Pratt and Whitney Stadium at Rentschler Field on May 31, 2021 in East Hartford, Connecticut. (Photo by Larry French/NCAA Photos via Getty Images) 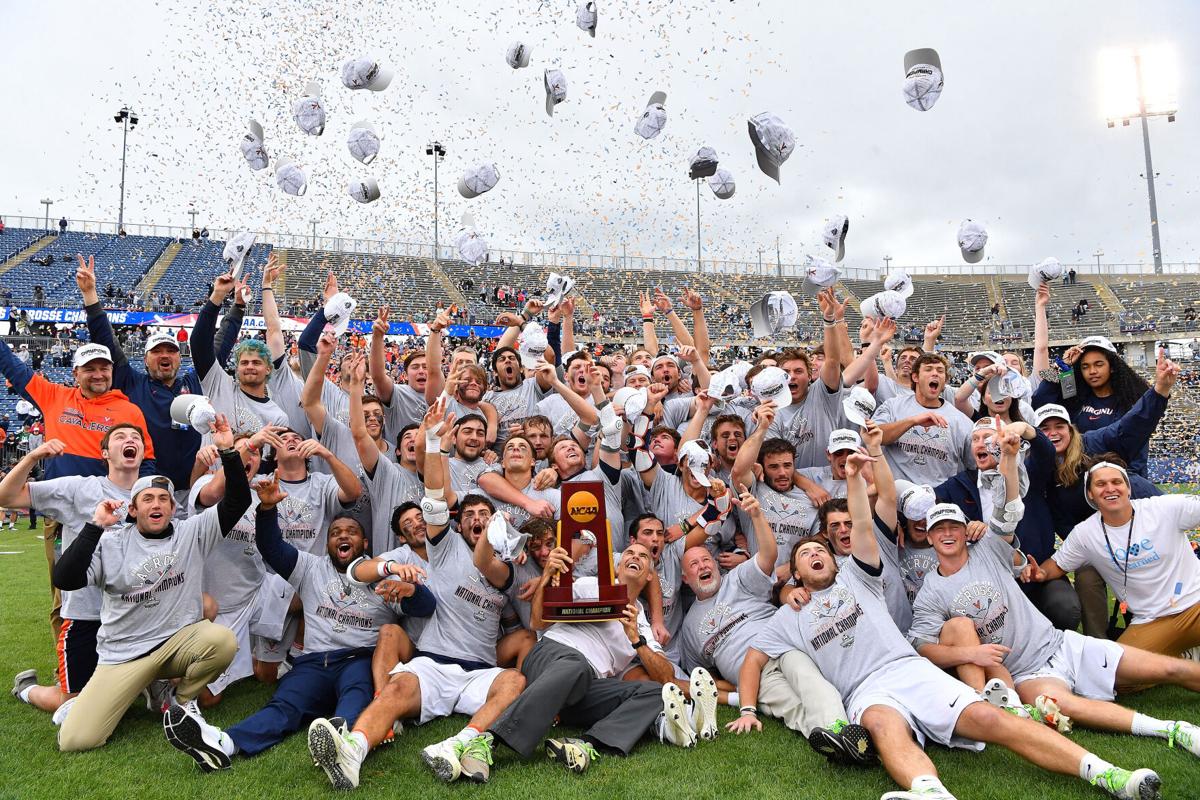 EAST HARTFORD, Conn. — As his players clipped pieces of the net from the cage — national championship keepsakes — Virginia men’s lacrosse coach Lars Tiffany raced across Rentschler Field, got his young daughter from the stands and carried her back to his team, where she clipped her own piece of the history her father had just achieved.

Tiffany has a photograph of himself and his daughter, Charlotte, from a similar scene after the 2019 title game and he wanted to recreate that.

After all, as he warned his team a year ago, it wasn’t easy.

“Cutting that net with her again, yeah, it’s amazing,” Tiffany said. “This is really, really difficult because there’s so many great coaches and great teams out there.”

For the first time in program history, UVa won back-to-back NCAA titles, holding off a furious comeback bid from previously unbeaten Maryland to win 17-16 on Monday, successfully defending the crown it won in 2019.

Two years since winning the title and a year after the pandemic cut short their initial bid to repeat, redshirt freshman Connor Shellenberger and senior Matt Moore each scored four goals to lead UVa to a 17-16 win over the Terrapins.

“I thought they were outstanding today, but really have been outstanding in the playoffs,” Maryland coach John Tillman said. “Just have been playing at a very high level and just were just a handful to prepare for, and obviously a handful today for us. …We did our best to try to keep up with them.”

In 2019, Virginia needed late scores to come back for wins in the quarterfinals and semifinals. This year’s march through May offered a different kind of drama. The Cavaliers grabbed big leads in the semifinal win over North Carolina and the championship victory against Maryland, only to see those edges whittled to one goal in the final minutes.

With the championship on the line, the Terrapins’ Luke Wierman won a faceoff with 10.8 seconds to play and rushed to the cage and fired a potential game-tying shot at Virginia senior goalie Alex Rode. But Rode, as he has so many times during the past two tournaments, made the final save.

“I was a little nervous, thought I owed my team a couple,” Rode said. “And luckily it hit me in the body.”

Junior Jeff Conner scored three goals for the Cavaliers (14-4), who thwarted the Terrapins’ bid to become the sport’s first undefeated champions since UVa turned the trick in 2006. Sophomore Payton Cormier added a pair in what equaled the highest scoring title game in NCAA history.

The game was tied at 11 with 9:11 left in the third quarter when the defending champions seized control with a 5-0 run, one that included two goals apiece from Moore and Shellenberger. But Maryland (15-1) mounted a final, furious comeback to set up the dramatic finish.

Senior attack Logan Wisnauskas scored five goals and had an assist for Maryland, but its star — senior attack Jared Bernhardt — was held to two goals and three assists by a UVa defense that was stifling throughout this NCAA tournament.

Rode finished with 12 saves, none bigger than the game-sealing stop on Wierman. Shellenberger was named the tournament’s most outstanding player.

During a regular season when Virginia opened ACC play with a 20-10 loss to Syracuse, friends of Tiffany repeatedly encouraged him by saying no one would remember how the team played in March if it finished the year strong in May.

And Tiffany’s Cavaliers turned in a memorable May, downing Bryant, Georgetown and North Carolina in the NCAA Tournament to reach their 11th championship game.

“We definitely had our ups and downs,” Shellenberger said. “But whatever it takes to win in May, and that’s kind of how it is. You get in the playoffs and it’s one and done.”

Virginia used a 6-0 run — including two goals each from Conner and Shellenberger — to build an 8-4 lead with 8:33 left in the first half.

Bernhardt brought the Terrapins back, scoring a pair of goals to cut UVa’s lead to 8-6 with 6:25 to go before the break. Maryland was within a goal before Cormier scored his second of the half, putting the Cavaliers up 9-7 heading to the locker room.

Virginia was 11-0 this season when leading at halftime entering Monday’s title tilt.

Maryland threatened that trend, using a 3-0 run early in the third quarter to tie the game 11-11 with 9:11 to play in the period.

But Maryland outscored UVa 5-1 during the final 6:13 to prove the point that Tiffany made to his team going into the 2020 season. Repeating as champions is hard.

Monday, proved that, but it didn’t prove too hard for the Cavaliers.

The Richmond Times-Dispatch EAST HARTFORD, CT—MAY 31: Virginia attack Payton Cormier (24) and mid Dox Aitken (6) celebrate a goal against the Maryland Terrapins during the Division I Men’s Lacrosse Championship held at Pratt and Whitney Stadium at Rentschler Field on May 31, 2021 in East Hartford, Connecticut. (Photo by Larry French/NCAA Photos via Getty Images)