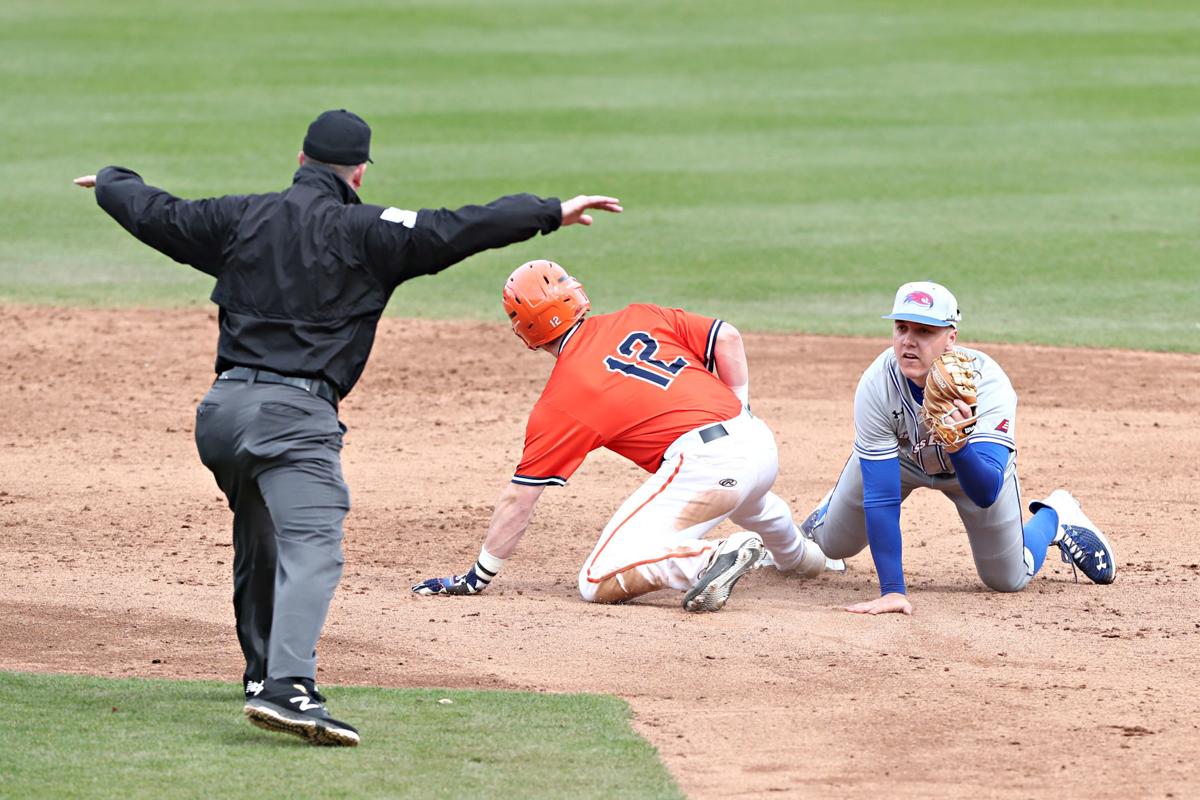 Virginia catcher Logan Michaels (12) is declared safe after stealing during a game against UMass Lowell on March 11, 2020, at Disharoon Park. Virginia won 4-3 in what turned out to be the final game of the 2020 season. 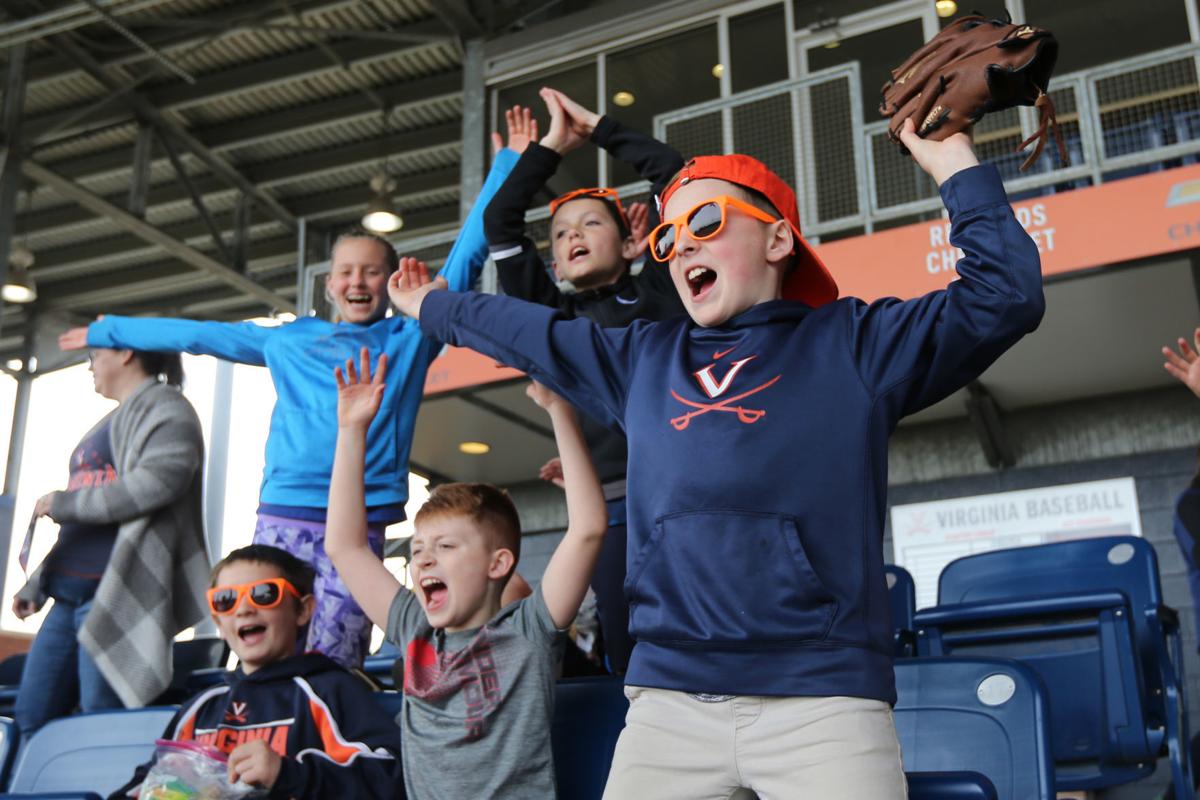 Students from Stone Robinson Elementary School dance during a game against UMass Lowell on March 11, 2020 at Disharoon Park.

March 11, 2020 was a day filled with cautious optimism for the University of Virginia’s student-athletes.

The date turned out to be the last day of athletic competition for six months, but it started with hope and excitement.

The UVa baseball team hosted hundreds of kids for Field Trip Day, and the Cavaliers beat UMass Lowell 4-3 in a surprisingly competitive game. The youngsters, excited to be outside for the day, screamed throughout the first six innings before having to head home.

“I just remember it was really loud,” sixth-year baseball pitcher Stephen Schoch said. “It was the loudest Disharoon Park has been since I’ve been here. It was packed.”

The game was fun.

Schoch, who came into the game in relief and earned the win for Virginia, remembers spending the first seven innings in the bullpen. A graduate transfer from UMBC, he knew UMass Lowell well from his time in the America East Conference. As a result, he wasn’t focused much on the scouting report.

Instead of worrying about the game plan, he felt a sense of gratitude. As hundreds of kids energetically supported his team, he thought about how fortunate he was to be a college student still playing what he calls “a child’s game.”

“I just remember appreciating how lucky I was to have the opportunity to still be playing baseball,” Schoch said.

In Morgantown, West Virginia, the UVa diving teams were competing in NCAA qualifying events. Walker Creedon, a sophomore at the time, excelled on the big stage.

Creedon finished first on the men’s platform to punch his ticket to the NCAA Championships for the second consecutive year. After the event, the team seemed extremely optimistic about the future.

“Walker did a great job competing and winning the event today,” Virginia head diving coach Drew Livingston said in a release after the event. “It seems like he’s been getting better at every meet on platform this season, so we’re looking forward to keeping the momentum up heading into the championships.”

The Virginia men’s tennis also competed on March 11, 2020. The Cavaliers beat William & Mary 7-0 to extend their winning streak to six consecutive matches ahead of ACC play. They were peaking at the right time.

Head coach Andres Pedroso was aware of the looming threat of COVID-19, but he tried to keep his team in the moment in what turned out to be the final match of the season.

“There was a lot of uncertainty around that match and whether it would be our last match or whether the season would keep going,” Pedroso said. “We were just trying to keep the blinders on and focus on the match and assume that we were gonna keep competing.”

Pedroso’s squad learned the next day that all NCAA winter and spring sport competitions were canceled.

The baseball team was traveling to Pittsburgh on March 12 when it learned of the season being shut down. The team was in a mall in Maryland, stopping to grab lunch, when they heard it was time to turn around and head back to Charlottesville.

“I guess it’ll always be talked about, where were you when it shut down?” Virginia baseball coach Brian O’Connor said. “I ended up being in a massage chair somewhere in Maryland.”

While March 11 was filled with hope, March 12 held heartbreak for many of UVa’s student-athletes and coaches.

Fortunately for Schoch and others, the NCAA extended eligibility relief to allow student-athletes to return for another season.

Virginia sports eventually returned on Sept. 12 when the Cavaliers’ women’s soccer defeated Virginia Tech 3-1. After a long hiatus due to the pandemic, UVa sports were back.

After experiencing last year’s devastation, Virginia’s athletic programs feel a sense of gratitude for this year’s events. COVID-19 still leads to postponements and cancellations as uncertainty remains, but unlike last spring, teams expect to compete through the end of the spring.

A year ago, there was cautious optimism on March 11. Those feelings have returned after a turbulent past 12 months.

“I just hope that we never have to encounter something like that again,” O’Connor said.

March 11, 2020 was a day filled with cautious optimism for the University of Virginia’s student-athletes. The date turned out to be the last day of athletic competition for six months, but it started with hope and excitement.

Virginia catcher Logan Michaels (12) is declared safe after stealing during a game against UMass Lowell on March 11, 2020, at Disharoon Park. Virginia won 4-3 in what turned out to be the final game of the 2020 season.

Students from Stone Robinson Elementary School dance during a game against UMass Lowell on March 11, 2020 at Disharoon Park.