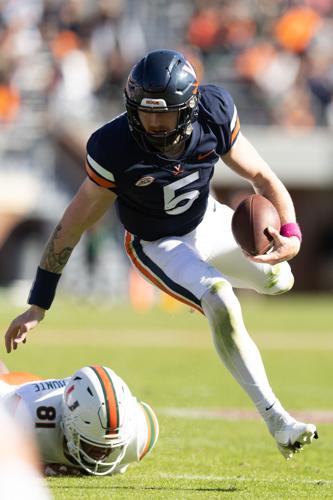 Ex-Virginia quarterback Brennan Armstrong, who has since transferred to N.C. State, jumps over a defender during a football game against Miami in Charlottesville this past October. Former Boston College quarterback Phil Jurkovec (5), who has since transferred to Pittsburgh, looks for a receiver during a game against Florida State this past September in Tallahassee, Fla Former Georgia Tech wide receiver Nate McCollum (8), who has since transferred to North Carolina, runs a route during the second half of an NCAA football game against Clemson on Monday, Sept. 5, 2022, in Atlanta.

It’ll take at least a few weeks into the fall to get adjusted to seeing the left-handed, orange-haired quarterback wearing N.C. State’s bright red or alternate black uniforms instead of the navy and orange ones he wore for the last five seasons.

But while signal-caller Brennan Armstrong’s move from Virginia to join the Wolfpack is, perhaps, the most notable transfer to leave one ACC program for another in the league during this recruiting cycle, he is not nearly alone in doing so.

College football’s first transfer portal window, which opened Dec. 5, officially closed on Wednesday and the spring semester has started on most campuses around the country. So, with 45 days of players departing for fresh destinations in the books, it’s an ideal time to pause and evaluate the comings-and-goings particularly within the ACC.

Of course, it should be mentioned that graduate transfers can enter the transfer portal at any time. But undergraduate transfers needed to enter the portal by Wednesday in order to enroll for the spring semester at a different school. The next portal window doesn’t open until May 1, when there surely will be plenty of player movement again following spring practices.

As for now, Armstrong is one of 18 players to leave one ACC school for another over the last month and a half.

He is one of two quarterbacks to transfer, but to still reside in the ACC along with Phil Jurkovec, who left Boston College for Pittsburgh.

Pittsburgh and N.C. State didn’t lose any transfers to other schools within the league either.

Clemson and Virginia Tech didn’t add any transfers from within the ACC, but the Tigers lost three players to other conference programs and the Hokies lost cornerback Armani Chatman to North Carolina.

Four cornerbacks to change teams – Chatman, Fentrell Cypress II (Virginia to Florida State), Cam’Ron Kelly (North Carolina to Virginia) and Al Blades Jr. (Miami to Duke) – were the most at any position.

Finally, of the 18 intraconference transfers, 12 will face their former teams in ACC action this coming fall.

Here’s a closer look at what each school gained from within the league or lost to conference foes during the six-week window.

Boston College: Lost one, gained one. The Eagles lost Jurkovec, their starting QB for each of the past three seasons, to Pittsburgh. He threw for 5,183 yards and 35 TDs compared to 17 interceptions in his time at BC, but dealt with injuries in each of the last two years. BC added former UVa starting offensive lineman Logan Taylor. The 6-foot-6, 300-pounder started eight games at left tackle and twice at right tackle for the Hoos this past fall.

Clemson: Lost three, gained none. Clemson lost wide receiver Decari Collins to N.C. State, running back Kobe Pace to UVa and defensive tackle Etinosa Reuben to Georgia Tech. Pace produced the most from this trio, and he was especially impactful in 2021 when he rushed for 641 yards and six TDs.

Duke: Lost one, gained one. Securing a commitment from Blades is a big boost for the Blue Devils, whose 257.3 passing yards per game allowed were the third most in the ACC. Blades has 18 pass breakups and four interceptions in his career. Duke lost linebacker Rocky Shelton II to the Hurricanes.

Florida State: Lost one, gained two. Cypress, an All-ACC second-team choice in 2022, was one of the most sought-after players in the portal and 247Sports ranked him as the fourth best transfer in this cycle. He was stellar at UVa and his 1.6 passes defended per game were the fourth most in the FBS. FSU also added former Miami starting D-Lineman Darrell Jackson, but lost edge rusher Amari Gainer to UNC.

Georgia Tech: Lost two, gained two. The Yellow Jackets lost two transfers to North Carolina in wide receiver Nate McCollum and safety Derrik Allen, but gained Reuben from Clemson and running back Trevion Cooley from Louisville. Cooley was a contributor for the Cardinals, racking up 709 rushing yards, 239 receiving yards and six total TDs over the last two seasons. McCollum, though, was GT’s leading receiver this past fall.

Louisville: Lost one, gained two. Cooley was a versatile running back, and his decision to leave certainly thins the position for the Cardinals. Louisville picked up former UVa offensive lineman John Paul Flores, who can play a few different positions on the O-Line, as well as ex-Miami safety/linebacker Gilbert Frierson, who brings with him 113 career tackles to the Cardinals.

Miami: Lost three, gained one. Coach Mario Cristobal has turned over his roster quite a bit since the Hurricanes’ disappointing 5-7 campaign in his first season at the helm. Jackson is probably the most significant loss, but Shelton’s addition is a quality one. The Fort Lauderdale native gets to return close to home and has 48 career tackles to go along with an interception, 4.5 tackles for loss and a pass breakup.

North Carolina: Lost one, gained four. The Tar Heels brought in Gainer, McCollum, Chatman and Allen, and lost Kelly to UVa. Gainer, Chatman and Allen all figure to be part of the reboot defensively, especially Chatman and Allen considering UNC’s secondary was not good last year. The Tar Heels had the worst passing defense in the ACC. Chatman has four seasons of playing experience and logged 22 pass breakups for Virginia Tech and Allen appeared in 31 games for the Yellow Jackets. McCollum will be in the mix as UNC tries to replace standout wide receivers Josh Downs and Antonie Green, who are off to the NFL.

N.C. State: Lost none, gained two. Armstrong, UVa’s career-record holder for total offense, passing yards and passing touchdowns, reunites with former Cavaliers offensive coordinator Robert Anae, who now holds the same job in Raleigh. Off a down season, in which Armstrong had 12 interceptions compared to seven TDs under coach Tony Elliott’s watch at UVa, Armstrong and the Wolfpack have to hope he bounces back and Anae can pull the best out of Armstrong again. N.C. State added Collins from Clemson, too.

Pittsburgh: Lost none, gained one. Like Armstrong, Jurkovec will work again with his former OC at his new school. Jurkovec will pair with Frank Cignetti Jr., who was in the same role at BC during strong 2020 and 2021 seasons for the quarterback.

Virginia: Lost four, gained two. Elliott said he wasn’t looking to add a running back unless it was one who could make a significant impact, and he found that in Pace, who Elliott recruited to Clemson originally. Pace upgrades the talent level in UVa’s backfield and Kelly helps replace Cypress in the Cavaliers’ secondary. The departure of the two O-Linemen to other ACC programs hurt, especially considering Taylor has a bright future.

Virginia Tech: Lost one, gained none. The Hokies lost Chatman. He had 22 tackles, a tackle for loss and an interception this past fall.

Stuck in the portal: Virginia's All-ACC linebacker one of more than 120 ACC players who hasn't found a new home

UVa's Nick Jackson is just one of over 120 players who entered the NCAA transfer portal this offseason and have not found a new program yet going into Wednesday’s national signing day, per a source with access to the database.

As Saturday dawned, Virginia was the only ACC team without at least one player averaging more than 13 points per game. But as the afternoon’s 76-57 thumping of Boston College affirmed, this Cavaliers’ offense is elite and in overdrive.

Ex-Virginia quarterback Brennan Armstrong, who has since transferred to N.C. State, jumps over a defender during a football game against Miami in Charlottesville this past October.

Former Boston College quarterback Phil Jurkovec (5), who has since transferred to Pittsburgh, looks for a receiver during a game against Florida State this past September in Tallahassee, Fla

Former Georgia Tech wide receiver Nate McCollum (8), who has since transferred to North Carolina, runs a route during the second half of an NCAA football game against Clemson on Monday, Sept. 5, 2022, in Atlanta.