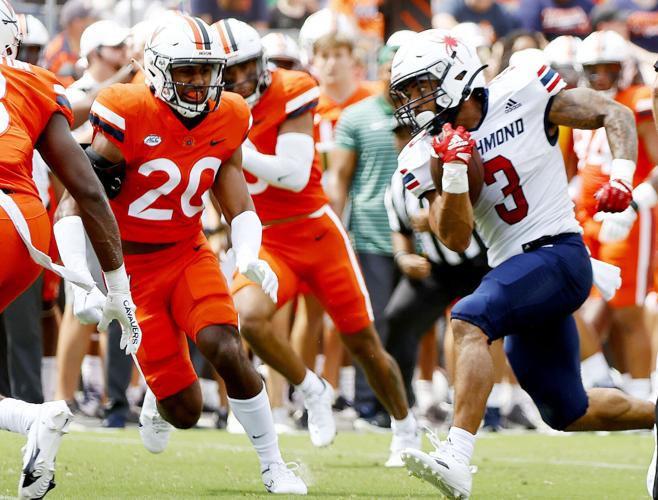 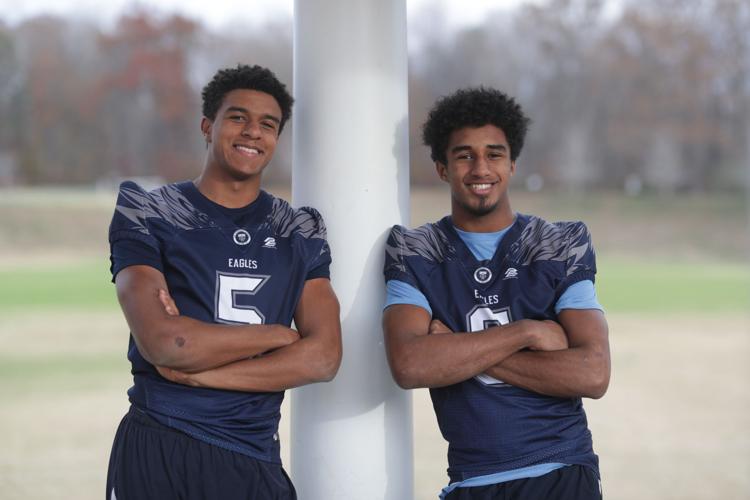 Jonas Sanker, right, and his brother Nic both starred at Covenant before becoming Division I football players

In games scattered throughout the Mid-Atlantic and at various levels of the sport, each sibling made a similar contribution for his respective squad.

The former standout at The Covenant School is in the midst of a breakout campaign in his first as a starter for the Hoos, and during the Cavaliers’ loss Friday at Syracuse, Sanker recorded the first interception of his career. In the second quarter, he leaped in front of a pass thrown by Orange quarterback Garrett Shrader to become the first player to pick off Shrader this fall. The signal-caller had gone 88 throws without one.

And, Jonas wasn’t the only one with the Sanker last name to tally an impactful turnover over the weekend.

Earlier on Friday, his younger brother, Lukas Sanker, a sophomore in the prep ranks at Woodberry Forest, had an interception in his school’s victory at Landon (Maryland).

So, the pressure was on Nic Sanker, a year older than Jonas, when he took the field for Ivy League power Princeton in its home-opening contest on Saturday against Lehigh to complete the brotherly trifecta.

“Our older brother Kendrick took the video of Jonas’ [interception] and was saying, ‘Lukas got one, Jonas got one’ and he said, ‘Are you going to get one?’” Nic said. “I responded, saying, ‘I’ll get one tomorrow,’ but I play outside linebacker and I do some drops [in coverage], but not too many. But I had to get one to keep the Sanker trend going.”

He did just that on the first series of the second half, which led to the Tigers’ go-ahead score on the subsequent possession.

“I was super pumped up that I was able to make a play for the team,” Nic said, “and keep the family trend going.”

Said Jonas: “The family chat was definitely dinging a lot this weekend. … It definitely means a lot and it’s good to know that you have a good supporting cast just in terms of everyone encouraging the other.”

The tight bond between the Sanker brothers has aided Jonas’ superb start with the Cavaliers this season, according to former Covenant coach Seth Wilson, who coached both Jonas and Nic when they were in high school.

“It’s just a culture as a family where it’s, ‘Let’s compete. Let’s train and put ourself in a good spot,’” Wilson said. “From the time Jonas was waking up to the time he was going to bed, he was always getting better at the sport.”

That was even when there was no football to be played during a critical year of Jonas’ development.

His senior season at Covenant was wiped out due to COVID-19, so during the summer and the fall of 2020, Nic said, the two of them constantly leaned on each other to be ready for whenever their teams would return to action.

Nic’s freshman season at Princeton was canceled because the Ivy League scrapped its athletic schedules during the pandemic. All of his classes were all online, so he was home in Charlottesville and trying to prepare himself for his first year in college. Jonas was doing the same in preparation for his first fall at UVa, which would come 12 months later.

They had played all the same sports on all the same teams during their childhood through high school, and during this period, the two were constantly in the gym at ADAPT, an athletic performance center in town, Nic said.

“We trained all day, every day,” he said, “and hitting multiple lifts and workouts and ADAPT helped transform our bodies. They did a really good job building our strength up and taking care of all the little things on our bodies during that summer into the fall with lifting and speed drills and keeping and taking care of our bodies to reach peak performance.

“That helped get my Princeton career off to a good start,” he continued, “and also helped Jonas really get his body right, get him bigger, stronger and faster and ready to compete at the next level.”

Added Jonas: “We were going to motivate each other. I feel a big responsibility in my family to push my brothers to be their best selves, because I know in high school and being at a younger age, it’s definitely not as motivating as when you’re here [at UVa]. You’re playing football for fun, but when you get to this college level you’re still playing because you love it, but you’re tested a lot more.”

He said he tries to instill that message to Lukas, too.

Ready from the get-go

In spite of not having a senior season of high school football, there was no hesitation from Sanker to contribute at UVa as a freshman last fall.

“When he first touched Grounds, you could tell he was a different kind of athlete,” Cavaliers junior linebacker Hunter Stewart said. “I could tell you from the first time I saw him even in the [seven-on-seven] period, he was built a little different athletically.”

The 6-foot-1, 204-pounder appeared in nine games and tallied five tackles in a reserve role in 2021 for former UVa defensive coordinator Nick Howell, who was the lead recruiter on the safety.

Sanker built on those early reps during the preseason last month, and with a new coaching staff evaluating him, he impressed enough to capture a starting role in the defensive backfield. Through UVa’s first four games, he’s played each of the Cavaliers’ three safety positions — strong safety, boundary safety and field safety.

To go along with his interception this past Friday, he racked up 10 tackles, a pass breakup and a fumble recovery against Syracuse. For the season, he’s third on the team with 28 tackles and also has logged a forced fumble.

“He just has a feel for the game that you can’t touch,” Wilson said. “You’d go back and watch the film and you’ll see this is where Jonas should be based on what our scheme says, but he just knows the ball is going somewhere else. And so, he would just know to move himself over to a different spot and blitz through a gap and stop a play.”

Sanker, who led Covenant to back-to-back 8-man state championships playing quarterback and running back on offense on top of his regular safety role, said those opportunities on offense he had with Wilson have translated to assist him as he’s matured into a first-teamer for the Hoos and make the adjustment with ease from the 8-man game to the standard 11-man football.

First-year UVa defensive coordinator and defensive backs coach John Rudzinski said he’s noticed those skills and more from Sanker, who the Cavaliers will need to be at his best as they enter the thick of their Atlantic Coast Conference schedule beginning Saturday at Duke.

“Jonas has great instincts,” Rudzinski said. “He’s a good communicator and you can see that quarterback background with his ability to have grown as a communicator in the backend [of the defense].

“And every opponent from here on out we’re going to see,” Rudzinski continued, “is starting to hit their stride as far as execution, so we’re going to have to do a great job of communicating, getting the next check, passing off motions and aligning to sets that we maybe haven’t put [our defense] through as many times as we’d like to.”

Sanker said he is focused on his responsibilities and wants to continue improving under the watch of Rudzinski and first-year Cavaliers coach Tony Elliott, who noted this week that Sanker, “has a nose for the football.”

“A lot of the goals we have are more team goals,” Sanker said, “but individually, I want to be in the right spots and make a lot of plays. But I’m really trying to be wherever they need me to be. If that’s making five tackles, but doing my job perfectly then that’s what I’m going to do. If it’s making 20 tackles, then that’s what I’m going to do. Whatever we need, I’ll do.”

Wilson and Nic Sanker said that’s been Jonas’ approach to sports for as long as they’ve known him.

Wilson said he can remember a week in which Covenant was shy on offensive linemen and had to have someone on defense or at a skill position volunteer to play guard. Jonas was the first, and actually played guard well in a game.

Nic said he cannot forget how poised his younger brother was when Covenant’s basketball team needed him to sink three free throws after he was fouled shooting a potential game-tying 3 at the buzzer.

“He goes up calmly, hits all three free throws,” Nic said, “gets it to overtime and helps us win the game. Nothing will ever rattle him and I think that’s something that’s special about him. No moment will ever be too big for him.”

And neither is suiting up for the ACC program in his hometown. Jonas Sanker is soaking it up and thriving with the Cavaliers.

“I’m definitely enjoying it and it’s nice to have your community so supportive of you,” he said. “I’m blessed for that.”

Jonas Sanker, right, and his brother Nic both starred at Covenant before becoming Division I football players