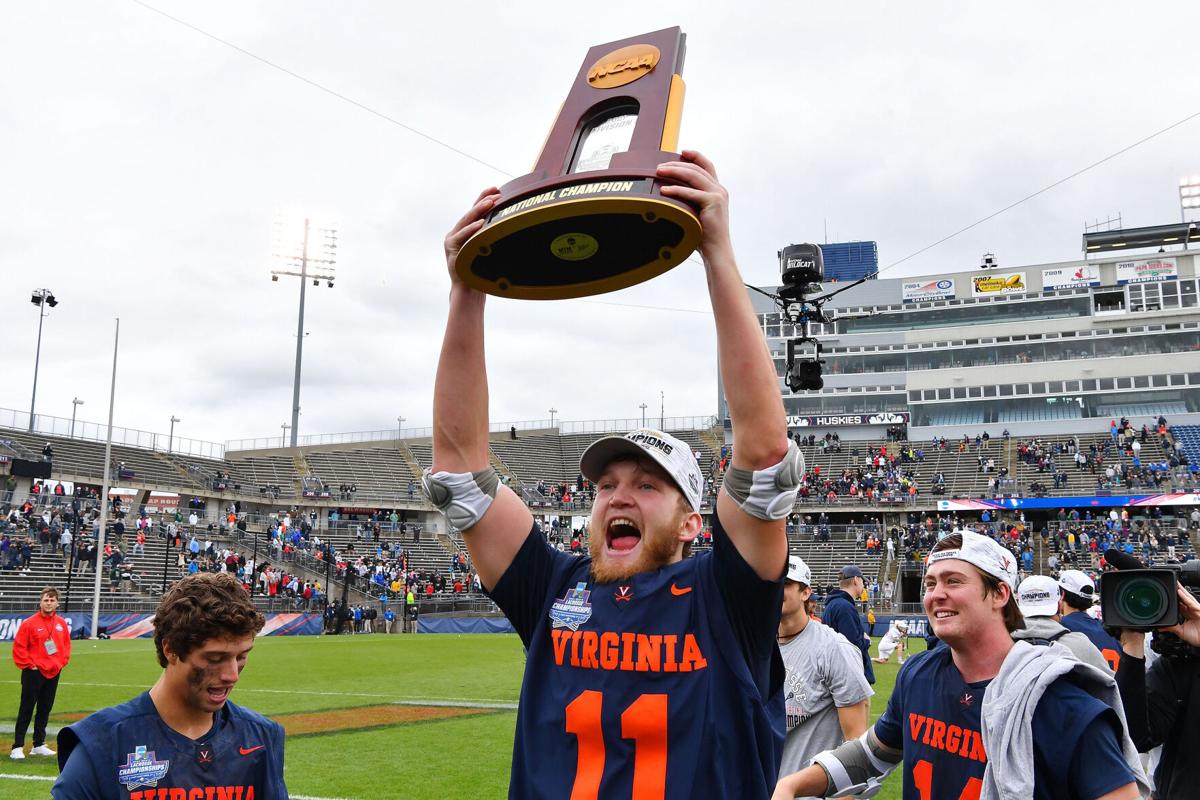 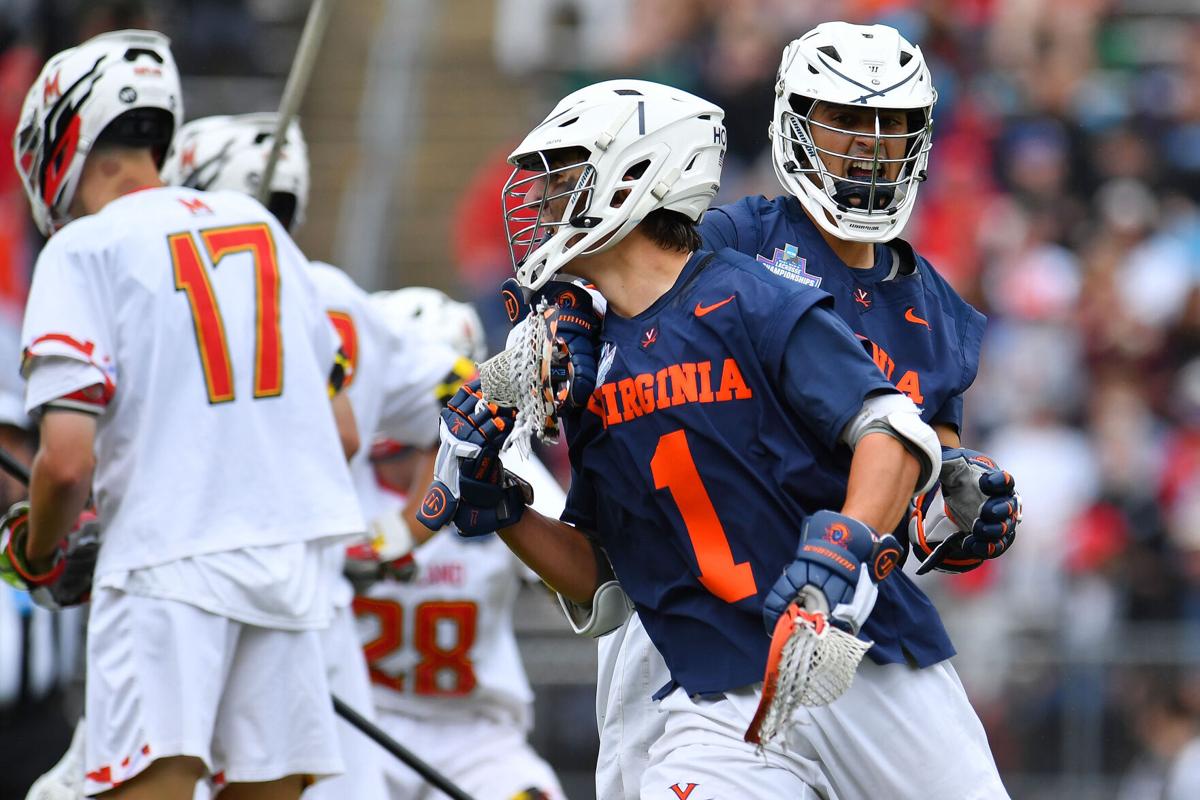 Virginia’s Connor Shellenberger, front, and Ian Laviano celebrate a goal against the Maryland on May 31 during the national championship game in East Hartford, Conn.

The Virginia men’s lacrosse program’s trophy case is getting some brand-new hardware.

Monday’s victory saw an abundance of standout performances from the Cavaliers, both from veteran leaders and a talented newcomer. Redshirt freshman Connor Shellenberger continued to ascend into elite status, while veterans Matt Moore and Alex Rode further cemented their championship legacies at Virginia.

Here are five takeaways from the Cavaliers’ thrilling win over Maryland in the national championship game.

The NCAA Tournament served as a coming out party for Shellenberger, who came to Virginia as the nation’s No. 1-ranked recruit.

After a strong regular season, the redshirt freshman took his game to another level in his first postseason with the Cavaliers, tallying 14 goals and 10 assists in Virginia’s four NCAA Tournament victories.

The former St. Anne’s-Belfield star saved some of his best work for last, finishing with four goals and two assists Monday against Maryland. Shellenberger was named the NCAA Tournament’s Most Outstanding Player.

“Connor is one of the best players I’ve ever seen,” Rode said, “and he’s also an amazing kid, which makes it even better.”

Shellenberger finished his redshirt freshman season 37 goals and 42 assists in 18 games. He will likely enter next season as one of the favorites to win the Tewaaraton Award.

“I’m so happy for him and I can’t wait to see what he does next as the face of this program coming up,” Rode said.

There is just something about championship weekend that brings out the best in Rode. Two years after being named the Most Outstanding Player of the 2019 NCAA Tournament, Virginia’s senior goalie stood on his head again and helped deliver another national championship.

Rode finished with 27 saves during championship weekend, including 12 in Monday’s national championship game win over Maryland.

None were bigger than his final stop of the day.

With Maryland down one in the waning seconds, Rode stopped a point-blank shot from a charging Luke Wierman that would have tied the game and forced overtime.

In the four championship weekend games he has played at Virginia, Rode has a 4-0 record with a combined 58 saves and two national championships.

“Alex Rode is about as clutch a lacrosse player as it gets,” Shellenberger said. “He’s a winner.”

Entering Monday’s national championship game, Maryland had not given up more than 13 goals in a game this season. The Terrapins’ defensive prowess was on full display Saturday in their dominant 14-5 win over Duke in the NCAA semifinals.

But Virginia was able to find cracks in the Maryland defense, using a balanced approach to tally 39 shots and 17 goals. The Cavaliers’ first six goals were scored by six different players.

“They have a great defense, and even just watching the Duke game on Saturday, we knew it was going to be a tough test. Duke has a great offense, and they essentially shut them down,” Shellenberger said. “Really it was just having a lot of belief, a lot of trust in one another and moving the ball. We kind of have this stereotype as an offense that we play hero ball, but we really do whatever the defense dictates us to do. We took it as a challenge and we don’t want to back down from Maryland’s defense, we wanted to go right at them, so that was kind of our mindset going into today.”

Eight players in total scored for the Cavaliers, led by Shellenberger and Matt Moore, who finished with four goals apiece. Jeff Conner tallied a hat trick and Payton Cormier tallied two goals, while Dox Aitken, Petey LaSalla, Jared Conners and Peter Garno each found the back of the net once for the Cavaliers.

Stopping Maryland attack Jared Bernhardt was a top priority for Virginia. The senior standout entered Monday’s game with a staggering 69 goals and 25 assists in 15 games this season. UVa coach Lars Tiffany called Bernhardt “the best player in the game for the last 10 to 20 years.”

“What Jared Bernhardt does to opposing defenses puts you in such a bind,” Tiffany said, “because he’s also such a balance of being able to make his feeds and see the field but yet when he’s going to the goal, there’s nobody tougher to stop.”

The Cavaliers did a solid job defending the Tewaarton Award finalist, limiting him to two goals and three assists. Tiffany credited defenseman Cade Saustad with helping to hold Bernhardt in check.

“Cade Saustad stepped up today,” Tiffany said. “We had several different thoughts and ideas and strategies. It’s just we ended up just sticking with the one of, ‘All right, Cade, this is your matchup; win it.’”

Holding on to history

Had Maryland won Monday, the Terrapins would have finished its season with an unbeaten record.

The last men’s lacrosse team to win a national championship with an unbeaten record was Virginia in 2006. That squad, which was arguably the best of the Dom Starsia era at Virginia, went 17-0 and won all four of the NCAA Tournament games by four goals or more.

Thanks to this year’s version of the Cavaliers, that squad will hold on to a fun piece of lacrosse history for at least one more season.

Virginia’s Connor Shellenberger, front, and Ian Laviano celebrate a goal against the Maryland on May 31 during the national championship game in East Hartford, Conn.