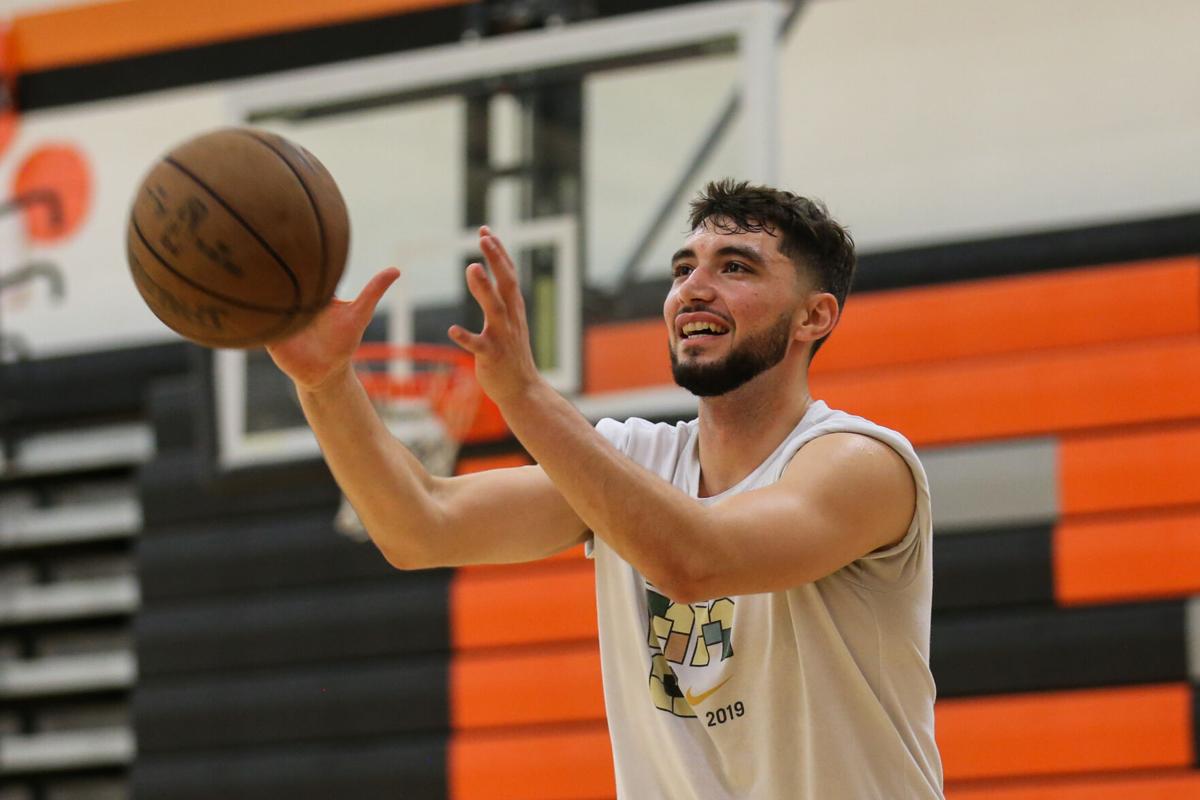 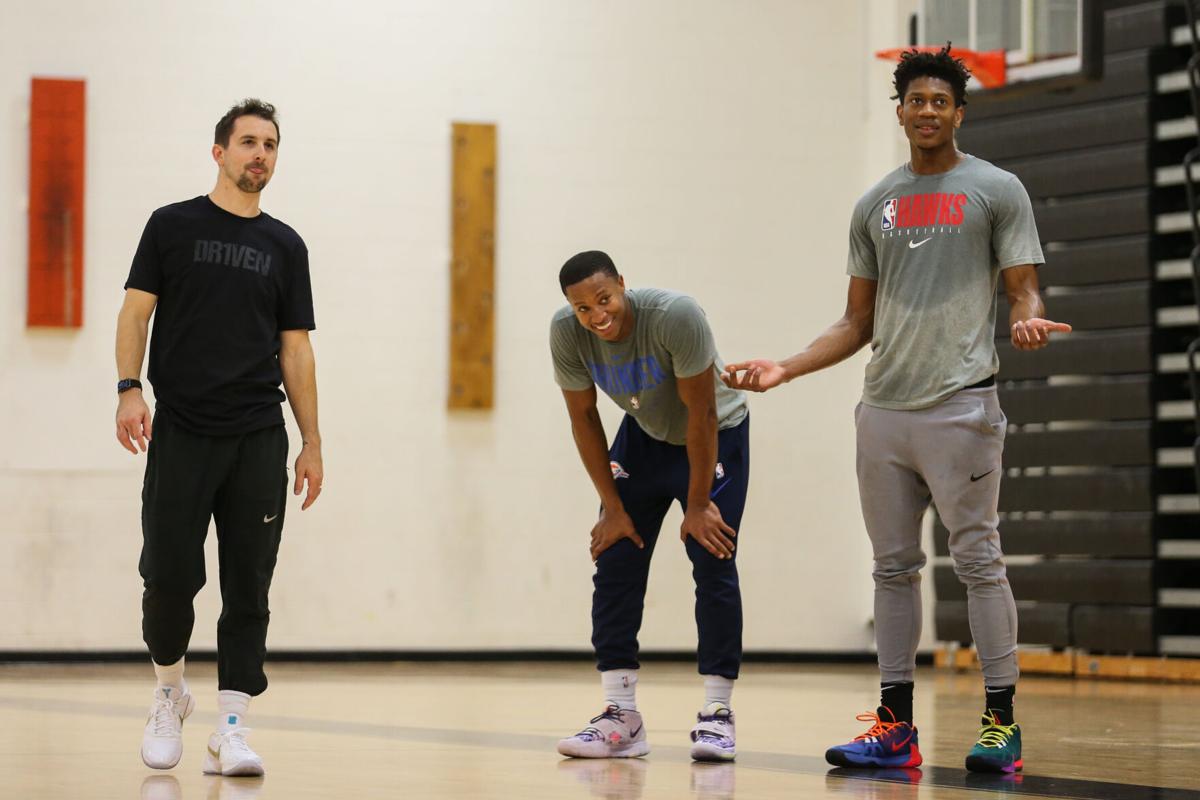 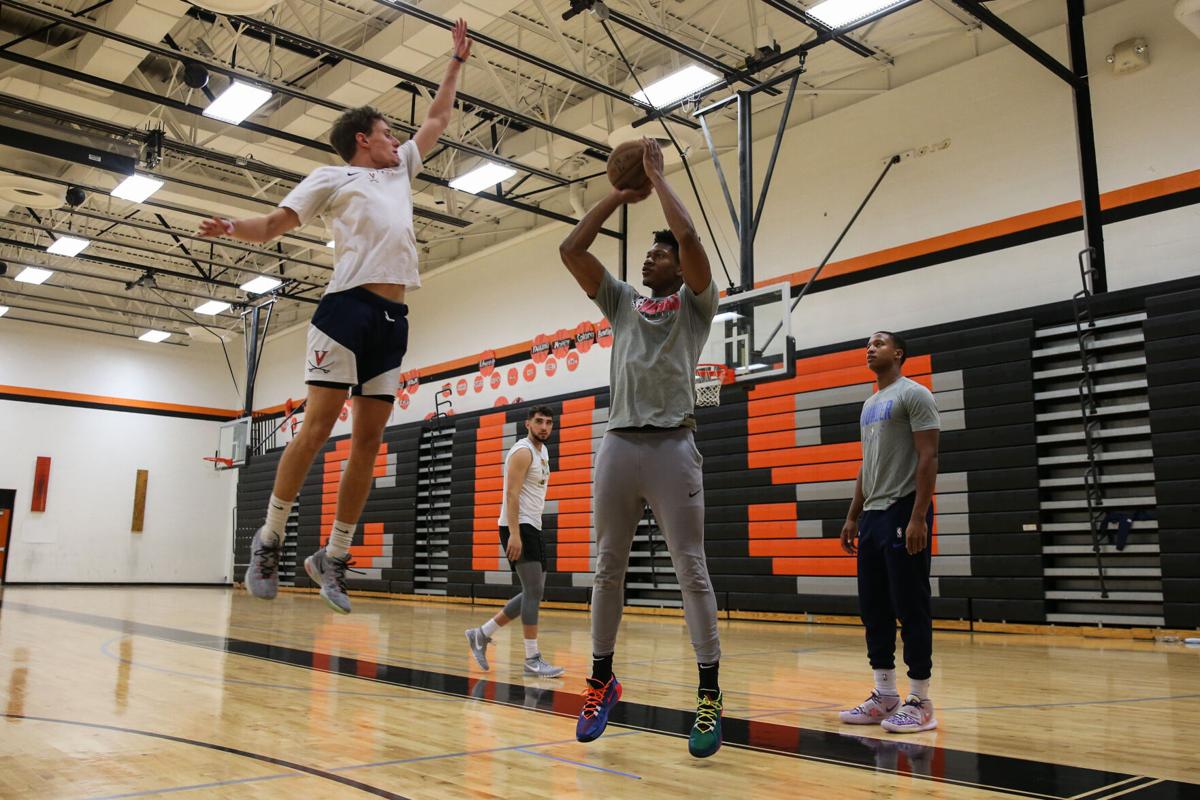 Those words rang true Thursday afternoon, when former UVa stars Devon Hall, De’Andre Hunter and Ty Jerome worked out at Charlottesville High School with Damin Altizer, a player development coach and the head coach of the St. Anne’s-Belfield varsity boys basketball team. Altizer walked on for the UVa men’s basketball team more than a decade ago.

“Because they could be anywhere with anyone, the fact that they come back here is humbling,” Altizer said.

In addition to Hall, Hunter and Jerome, Justin Anderson, Anthony Gill and London Perrantes also spent time this offseason working with Altizer in Charlottesville. The coach feels fortunate that the same players who worked with him in college decided to keep using his services after they joined the professional ranks.

“It’s awesome,” Altizer, who founded the player development organization DR1VEN Training, said. “It’s weird because it gets to the point where it’s like lottery pick, first-rounder, this, that, but for me it’s ‘Dre and Ty. It’s the same kids who came in as awkward 18-year-olds.”

Hall spent the first two years of his professional career in Australia and bouncing between the NBA and G League, while Hunter and Jerome both received significant NBA minutes as rookies. Hunter, drafted No. 4 overall in the 2019 NBA Draft, developed into a key piece of the Atlanta Hawks’ rotation this season.

For the players returning to Charlottesville, they like turning to a coach they’ve seen improve their games over the years.

“He changed my game,” Hall said. “I wouldn’t be here right now; I wouldn’t have gone to where I was if it wasn’t for him. He’s next level.”

Hall, who made his NBA debut and scored his first NBA points this season, currently competes as a member of the Oklahoma City Thunder organization.

Jerome, a member of the Phoenix Suns, credits Altizer for some of his collegiate growth, having worked with him while at UVa. He stressed the importance of Altizer understanding his game and knowing the type of training that will lead to results for the point guard.

“Damin had a big part of my growth throughout my years here at college at UVa, so I know for a fact that it works,” Jerome said. “He sees the game in a great way. I trust his opinion, and he can really dictate workouts to what I need.”

Hunter enjoys practicing with fellow NBA-level talents while also returning to a town he embraced for multiple seasons as a Wahoo.

The loyalty of the various former UVa stars hits home for Altizer. It’s not lost on him how exciting it is to work almost daily — Jerome and Hall have trained with Altizer six days a week for the past two months — with NBA athletes.

They’re among the first NBA players to turn to him regularly as their player development coach.

“I think it speaks to the type of kids that coach [Tony] Bennett has,” Altizer said. “Everything everybody knows about TB’s kids, they’re humble, they’re hard-working, they’re servants, they’re never bigger than the program … they are everything they say they are and more.”

The guys weren’t sure they’d be able to make it to Charlottesville to train with Altizer when the pandemic first hit. Schools and gyms closed swiftly due to rapidly changing health conditions brought on by COVID-19.

Jerome’s agent reached to out to Charlottesville High School athletic director Rodney Redd in hopes of finding a spot to train.

Redd, after discussing plans with school officials, determined the players could use the space to train with Altizer as long as they followed health protocols.

Players wear masks prior to arriving in the gym. Altizer also provides hand sanitizer and ensures balls are cleaned when being used. The players keep their distance from each other and others when possible.

Interactions within six feet are mostly limited to just players, many of which have rented a home in the area and have stayed there when training. Jerome and Hall have both been in town for the past two months or so.

“Without Rodney Redd, these guys aren’t here,” Altizer said. “He’s been a blessing. In March, I didn’t even know him, and since then it’s been like, ‘Man, I’m so, so fortunate to have met you.’”

The NBA athletes stay on one half of the court, while the local athletes remain on the other side. Other times, the NBA players wait for the local kids to wrap up their work before heading onto the court themselves.

Hunter added that interactions are limited due to COVID-19, but if younger players come up to talk, the professionals gladly share a few words from a distance. The exchanges and appearance of the NBA players means a lot to Redd and Charlottesville High School.

“UVa as a whole and their athletes have done so much for the Charlottesville community,” Redd said. “Even though they do not mix with our kids or our athletes for COVID-19 reasons, just to know that our facilities are good enough for them and that’s the type of athletes that train here … it just kind of bridges that gap between what could be and what some of their dreams are to know that those same guys are willing to come back here and train in some of the same spaces that they’re in.”

The facility isn’t anything flashy, but it’s a gym with multiple hoops. That’s more than enough for Hall, Hunter and Jerome.

The man leading the workouts is respected by everyone in the building, from the former national champions to the teenagers learning how to properly handle the basketball.

“From lottery picks to middle school kids just trying to make the team, you don’t really get that a lot of places,” Altizer said. “It’s fun that it’s happening in Charlottesville.”

It’s not lost on Altizer that the budding stars could train elsewhere.

Instead, they choose to come to their college home to train with a guy who worked with them before they were stars.

“So many guys are spending their offseason in L.A. or Miami or wherever,” Altizer laughed. “They’re back here in Charlottesville eating Sedona and Now & Zen.”

For the players, a chance to compete against fellow NBA athletes while returning to a town they love is an easy decision.

“It’s been awesome to just be back here together,” Jerome said. “That’s what you miss most about college, just being with your closest friends, closest teammates. The fact that we can all rent a house together and stay here, work out together, it’s perfect.”