Virginia football coach Bronco Mendenhall likes the makeup of his team this season. 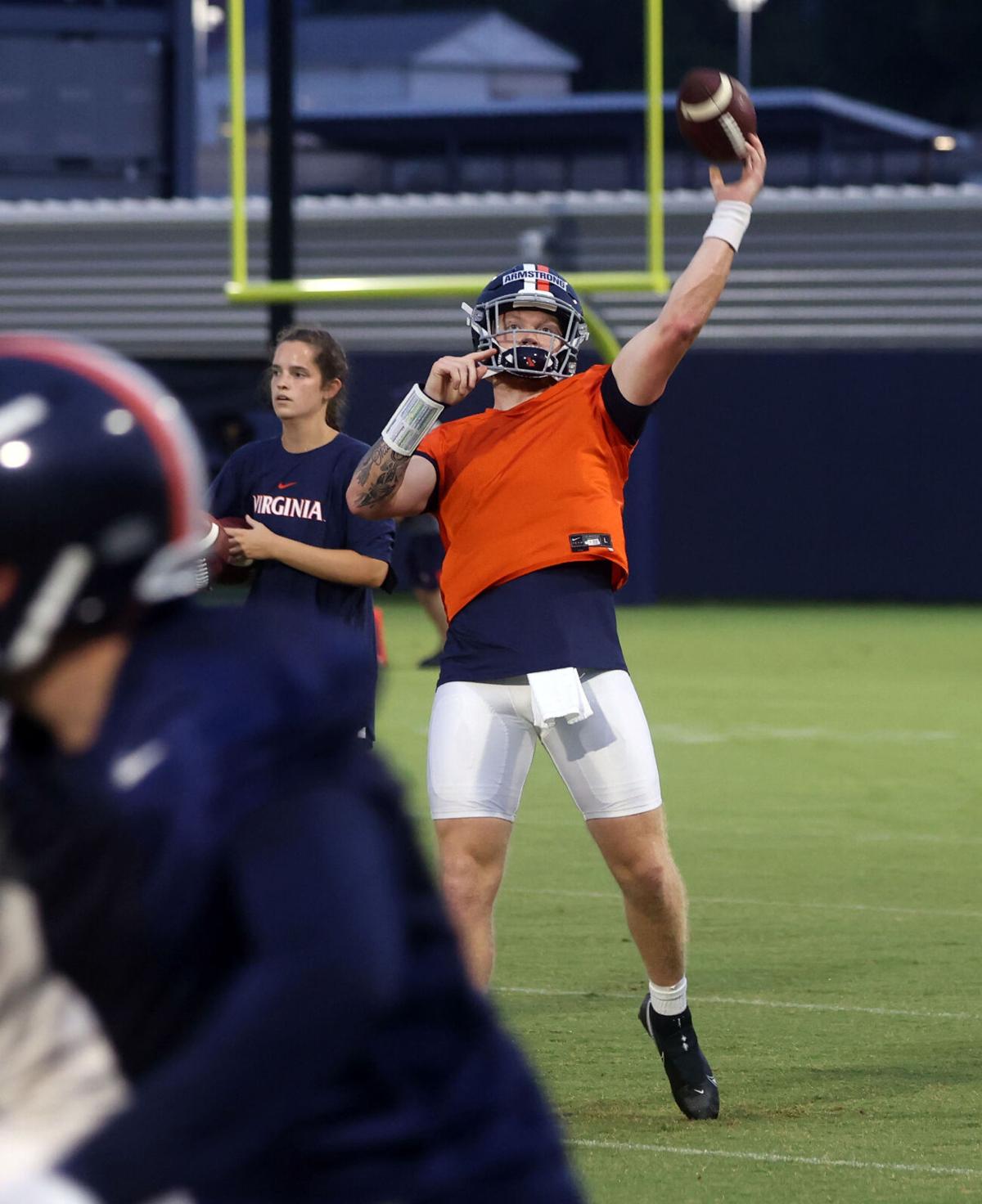 Virginia quarterback Brennan Armstrong throws a pass during practice at the University of Virginia.

Bronco Mendenhall doesn’t mince words when it comes to his football team.

If he feels his team lacks talent and depth, he says so.

In 2018, he told the University of Virginia’s Board of Visitors only 27 of the team’s players were ACC caliber. Last season, he didn’t hide from the team’s secondary issues and turnover problems.

This offseason, especially in recent weeks, Mendenhall has remained blunt. Instead of discussing flaws or areas of improvement, however, UVa’s head football coach has often shared words of confidence.

Offensively, the team returns the majority of its offensive line. Quarterback Brennan Armstrong enters his second season as a starting quarterback with significant promise. Armstrong ranked 18th nationally last season with his 296.6 yards per game. He’s a gifted runner with a strong arm, and he tied for the FBS lead with six games of at least 200 passing yards and 45 rushing yards.

Wide receivers include Keytaon Thompson and Billy Kemp IV, two experienced players who have performed well during offseason practices. Dontayvion Wicks, who missed 2020 with injury, figures to play a key role for the team at wide receiver as well.

Oklahoma State transfer tight end Jelani Woods is expected to be a bright spot. At 6-foot-7, his size makes him a matchup problem. The team boasts plenty of running back depth. Wayne Taulapapa, a senior, is among the leaders at the position.

Last season, the Cavaliers finished seventh in the ACC in scoring offense, averaging 30.7 points per game. UVa expects to surpass that mark this fall.

“We’re gonna score a lot of points,” Mendenhall said. “That’s the No. 1 driver of who wins college football, so I like that.”

De’Vante Cross and Joey Blount return as veteran safeties. The team added Anthony Johnson as a graduate transfer at the position. He’s a big personality, one that fits well in the position group. On the field, he brings a physical presence.

Cornerback also enters the season with depth. Returners Nick Grant and Darrius Bratton are joined by North Dakota State transfer Josh Hayes, who has over 50 games of collegiate playing experience.

After allowing over 300 passing yards per game last fall, UVa believes its secondary can not only improve, but also turn into a difference maker.

The confidence Mendenhall shows weekly in press conference is delivered daily to his players. It’s a contagious confidence, one that’s working its way through the locker room despite mediocre preseason expectations.

Virginia, which is technically the defending ACC Coastal champion after divisions were not used in 2020, was picked to finish fifth in the Coastal this fall. The Cavaliers come in behind North Carolina, Miami, Virginia Tech and Pitt. They’ll face both UNC and Miami on the road in September.

Only Georgia Tech and Duke, two teams expected to struggle to qualify for bowl games, were picked behind the Cavaliers.

Despite minimal outside expectations, Mendenhall is bullish about his program. Even the players sense the confidence stemming from their head coach.

“I think us being more of a veteran group makes him more confident,” center Olu Oluwatimi said.

Confidence doesn’t mean much if the Cavaliers don’t back it up with wins. They went just 5-5 in 2020. By no means was it a terrible season, but it wasn’t particularly noteworthy.

Virginia lost to Virginia Tech by three scores and finished the season with a 4-5 ACC record. There were some triumphs, like a home win over a solid North Carolina team, but the Cavaliers were a middle-of-the-pack ACC team.

The Wahoos believe they’re good enough to win the historically unpredictable ACC Coastal this fall. That belief starts at the top.

“We think a Coastal championship goes through Charlottesville, and we’re the defending champion,” Mendenhall said in July. “Seven teams in seven years, someone’s got to win it again, and I like our chances.”

Virginia football coach Bronco Mendenhall likes the makeup of his team this season.

Virginia quarterback Brennan Armstrong throws a pass during practice at the University of Virginia.