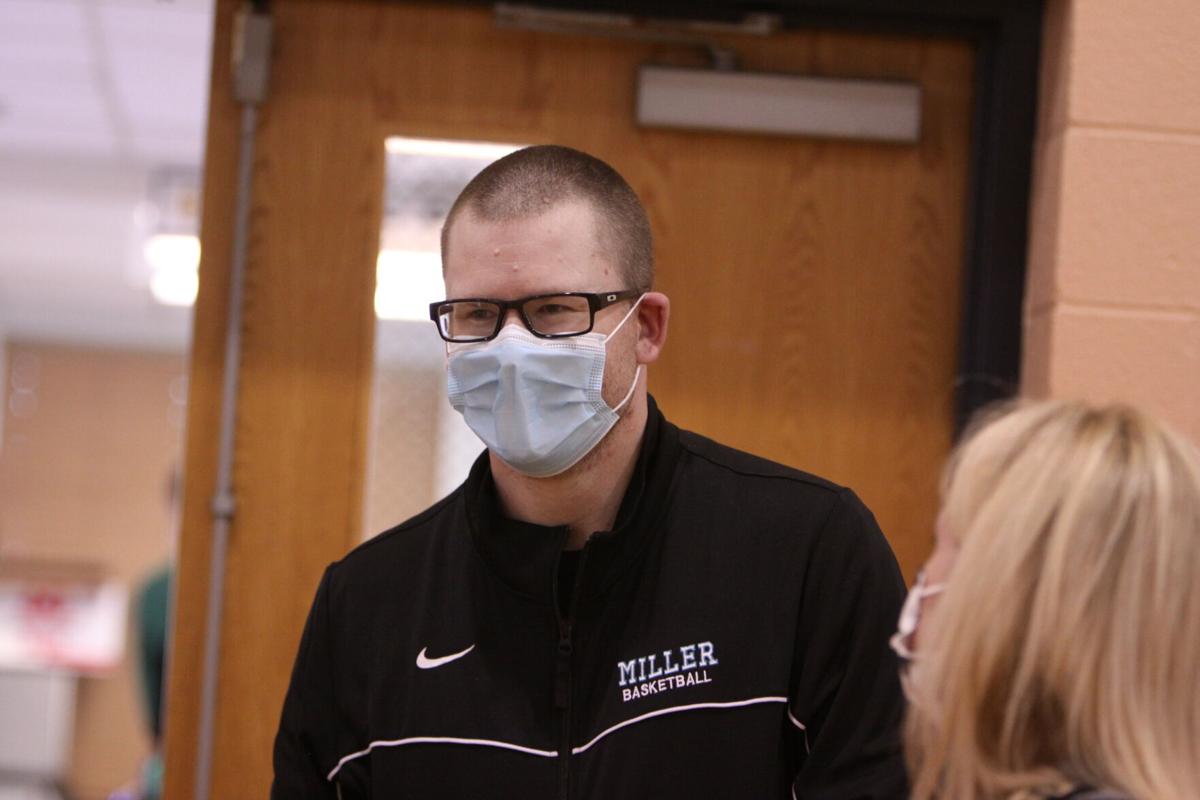 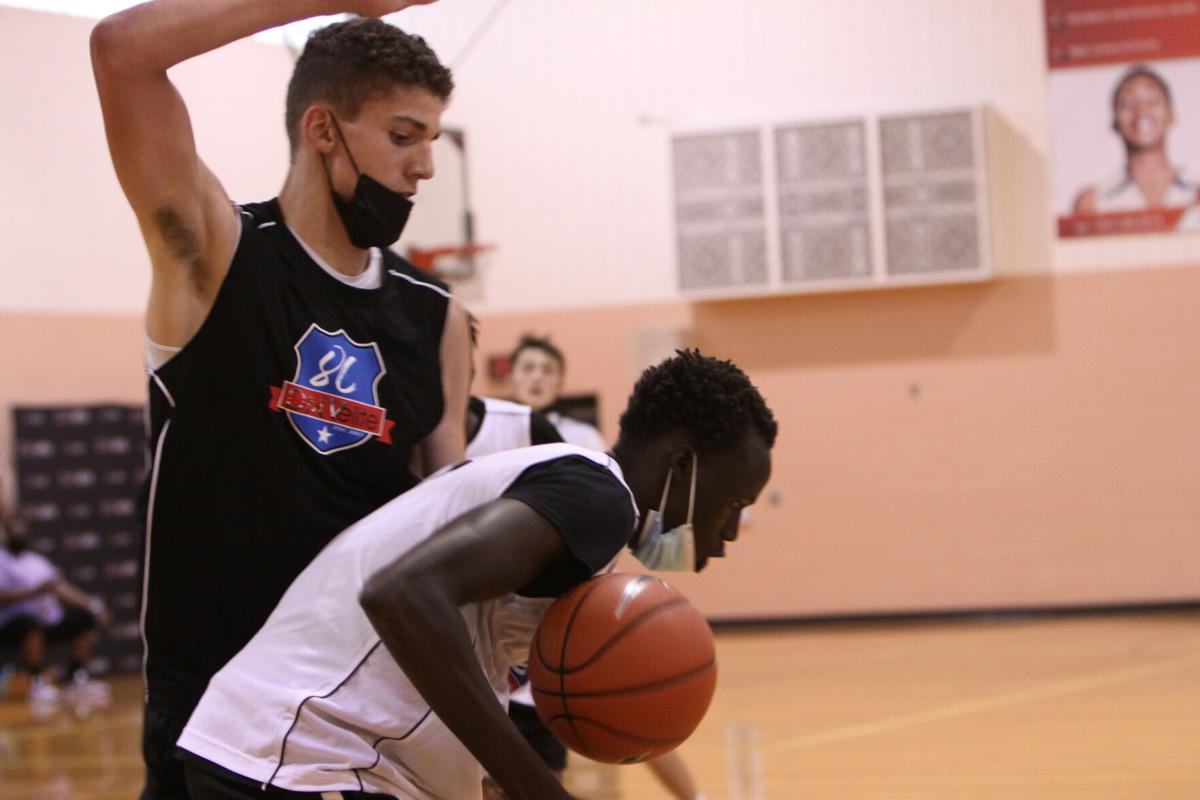 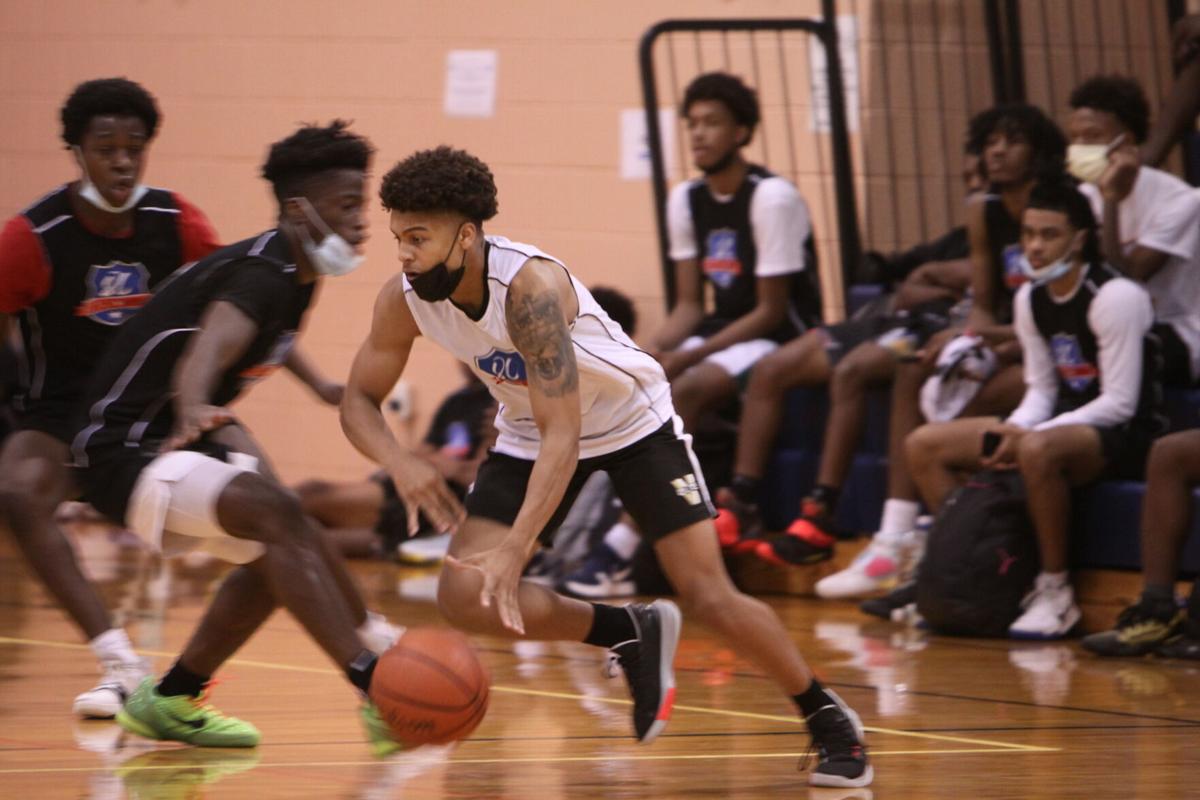 Blue Ridge’s Devin Walker looks to drive past a defender during the DMV Elite 80 showcase in Bowie, Md.

CHRIS LASSISTER For The Daily Progress

BOWIE, Md. — After knocking down three consecutive 3-pointers, Chance Mallory pulled up to attempt a fourth.

It was a heat check.

The St. Anne’s-Belfield sophomore guard gave his new teammates a playful nod. He then pointed to his wrist, signifying that he missed the shot attempt because he was fouled.

At 5-foot-8, Mallory was one the smaller players at the at the DMV Elite 80 basketball showcase. For a four-minute stretch, however, Mallory put on one of the biggest shows.

“I found my shot,” Mallory said, “so I just had to keep shooting.”

Mallory was one of eight Charlottesville-area high school players to compete at the prestigious showcase on Sunday. John St. Germain, a teammate of Mallory’s at St. Anne’s-Belfield, also competed.

The NCAA’s live recruiting period, which allows coaches to be in gyms, started on Sept. 9.

DMV Elite was started by Chris Lawson in 2009 as a way to get more kids exposure. Shortly after its inception, Lawson and staff also started hosting their own events. The DMV Elite 80 is one of the organization’s marquee events, with NBA players such as Markelle Fultz, Luka Garza and Immanuel Quickley among the list of former participants.

“We just want to spotlight kids through events and media,” Helton said. “We’re just trying to help kids get as much exposure as possible. The goal of DMV Elite 80 was to try to get all of the best players in our area under one roof. And, of course, we’re missing some today. Some guys are on recruiting visits and other guys are hurt.”

Started in 2013, the DMV Elite 80 focuses on the top players in Maryland, Washington, D.C., and Northern Virginia. It’s recently branched out to include athletes from other surrounding areas, including Charlottesville.

“It’s all about relationships,” Helton said. “I’ve known Jack Meriwether at Miller School since he was coaching with Boo Williams. He’s brought some of his kids for years, and this year I reached out to other guys I’ve had relationships with like Damon Altizer at STAB and coach Cade Lemcke at Blue Ridge. I’m honored that they would come all the way up here to have their kids take part in it.”

“With the different basketball jobs I’ve had, this event has always been the best talent in this area,” Meriwether said. “For us, to get the chance to play in it, we do whatever we can to get [student-athletes] up there. Most events have some good players and then a drop-off. The DMV Elite 80 is probably the deepest event, where everybody out there on the court can really play. And it’s the best players in this area.”

Miller athletes have a history of participating in the DMV Elite 80. This, however, was the first time for all three of the current players.

“It was good competition,” said Davis, a 6-foot-5 senior guard at Miller. “Everyone was getting after it. There were a lot of good coaches and a lot of good athletes.”

“We had some really good runs,” Ball said. “It’s much better than just playing pick-up ball right now. It was really enjoyable. I liked it.”

It was the first year that athletes from Blue Ridge attended the event.

“It was a really good experience,” said Walker, a 6-foot senior guard at Blue Ridge. “We played against some of the best people in the DMV; a lot of high-level guys. Everybody’s working hard.”

“Being active on the defensive end is something I’m focusing on here,” Emory said. “That’s not something everyone does here.”

The players tried to showcase their talents while playing on a team full of players they met moments before the first tip-off. Brown made the transition easily.

“It was pretty good for my first time being at this camp,” said Brown, a 6-foot-9 senior at Blue Ridge. “I saw lots of new faces. I’m on the court just trying to ball and have fun.”

It was also the first year that St. Anne’s-Belfield had players attend.

“It was a lot of exposure for the players here,” said St. Germain, a 6-foot-2 junior from STAB. “It was good information they taught me on how to approach the game. We pushed the ball a lot. There was no walking the ball, and we were picking up [defensively] full court every time. I just learned to have a high motor the whole game.”

A full recap of the DMV Elite 80 showcase can be found at https://dmvelite.com.

Blue Ridge’s Devin Walker looks to drive past a defender during the DMV Elite 80 showcase in Bowie, Md.