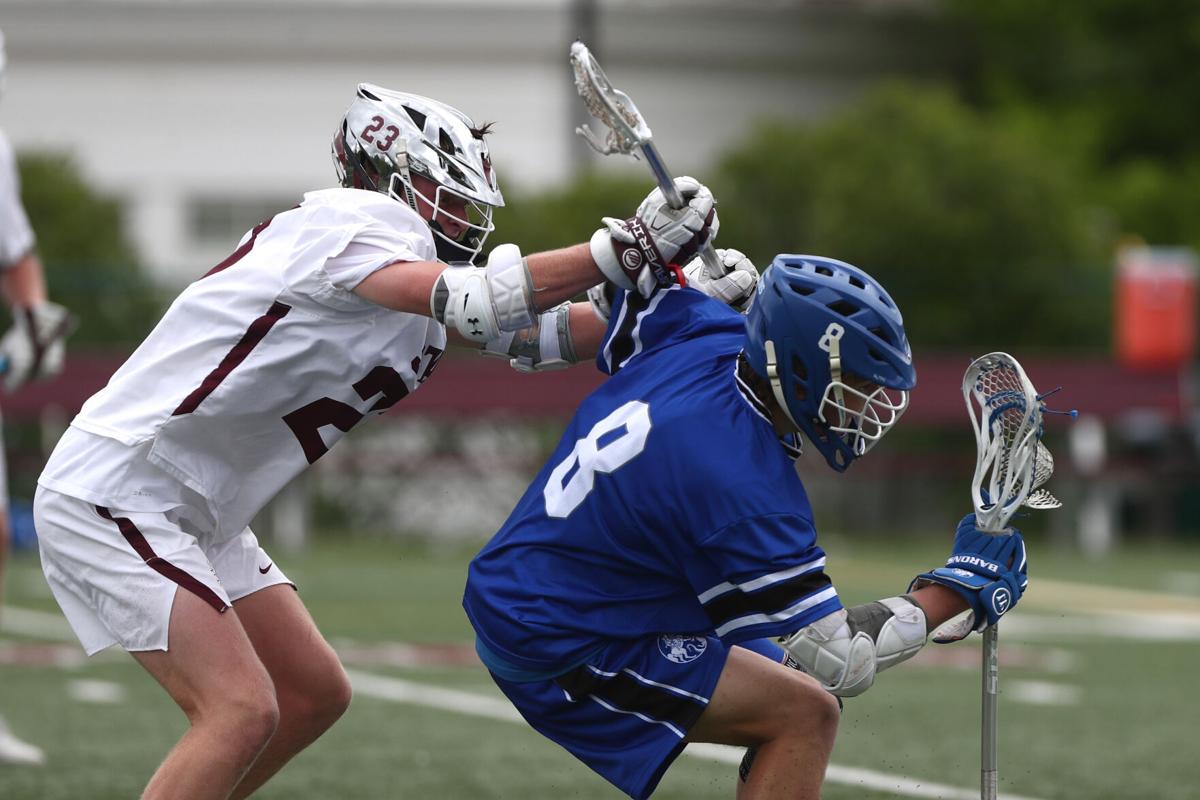 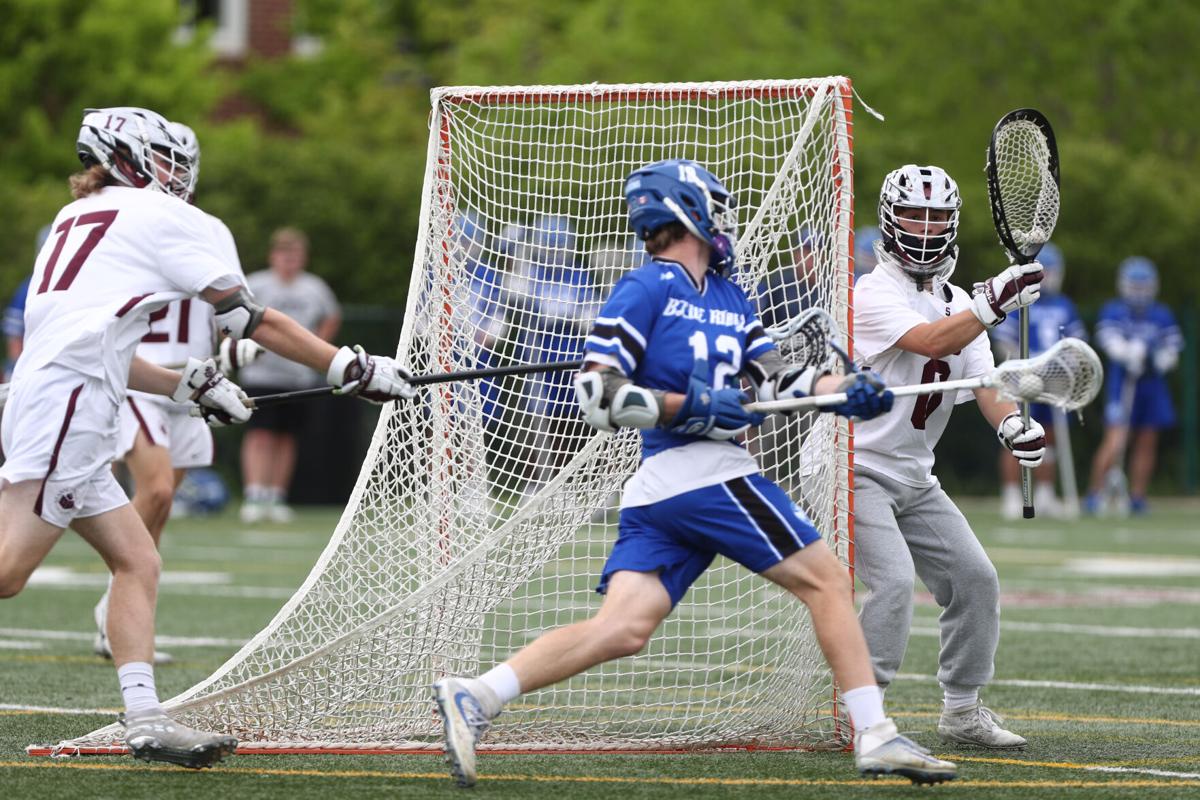 Blue Ridge’s Jack Charboneau (12) carries the ball during a game against St. Anne’s-Belfield on Monday.

Blue Ridge lacrosse coach Dom Starsia doesn’t just teach skills to his players, he also stresses the importance of mental toughness and camaraderie as key cores of his program.

All of those traits were on display Monday afternoon as the Barons rallied from a tough start to post a significant 8-2 road victory over St. Anne’s-Belfield in a showdown of ranked VISAA Division I teams.

Jack Charboneau scored two goals and assisted on another as Blue Ridge (4-6) got back to its winning ways after a long weekend of lacrosse in the Hampton Roads area.

“This is a big one,” Charboneau said. “We haven’t played STAB in a couple of years and to just come here and get a win is big for the guys. A win like this is a big character win where everybody put in a good effort. Guys on the bench getting hype, all the guys out here selling out for loose balls, it was a big day for us.”

Starsia put together a challenging schedule for his team this spring, including a pair of tough matchups with Cape Henry Collegiate and Norfolk Academy this past weekend. The showdown with Norfolk Academy was an intriguing one for Starsia, who had an opportunity to coach against former UVa standout and current Bulldogs coach Ryan Tucker.

The Barons lost both matchups, but came ready to play again Monday against a young, but improving STAB side.

The Saints, who lost to Woodberry Forest last Friday, were champing at the bit to get back on the field and it showed early on Monday with a goal nearly three minutes into the game. Jack Connelly started to his left, spun away from the defender to his right and roofed a shot over Blue Ridge keeper Adam Bland for a 1-0 lead with 9:35 left

The Saints’ advantage would be short-lived. Blue Ridge responded with five unanswered goals to build a commanding 5-1 lead after one quarter of play.

Lucas Shoebridge found Charboneau in transition and the senior buried a shot past STAB keeper Jago Gould to tie the game at 1-1 with 8:36 left in the first.

Two minutes later, Kolbe Hauge got free behind the cage and ripped a shot from the left wing for a 2-1 lead for the Barons. The Blue Ridge offense continued to click on all cylinders and increased the lead to 3-1 with 3:30 left in the quarter on a shorthanded goal from Spencer Amacher.

Charboneau added his second of the half less than a minute later, this time from the right wing, for a 4-1 advantage, then Phoenix Pullen capped the goal-scoring run with a marker through a screen for a 5-1 lead after one quarter of play.

“Coach Starsia has preached adversity and dealing with it,” Charboneau said. “Honestly, we’ve kind of struggled with it the last couple of games, but knowing that we’ve had some adversity early on in this game and then coming right out and banging out five quick [goals], that really helped.”

Defense stole the show in the second quarter, as Gould was locked in between the pipes for the Saints. The STAB senior keeper turned aside five shots, including a great point-blank save on Pullen on a two-on-one chance, to keep his team in the game.

It also gave his teammates a lift. Connelly found Tim Myers at the top of the diamond for a shot inside the right post to trim the Barons’ lead to 5-2 at intermission.

Blue Ridge got back on track offensively in the second half, opening the third quarter with three unanswered goals to put the game out of reach.

Fort Carden found the back of the net with 8:06 left in the quarter to give his team a 6-2 lead. The junior struck again three minutes later when he rifled a shot past the keeper to give BRS a 7-2 advantage.

Pullen added his second goal of the game with 2:32 left in the quarter off an assist from Charboneau to cap the scoring.

Bland had six saves in goal for the Barons to preserve the win. Gould finished with six saves for the Saints.

Charboneau was happy with his team’s performance, which included 18 shots on goal.

“I wish we would’ve put a few more goals up,” Charboneau said. “We had a lot of chances, but the team battled and that’s all you can really ask for. Right from the back, [goalkeeper] Adam Land kept it solid all day. We had a tough couple of games, but we’ll get a couple of days of practice and head into the rest of the season.”

Blue Ridge’s Jack Charboneau (12) carries the ball during a game against St. Anne’s-Belfield on Monday.