James Madison University postpones all fall sports due to COVID-19 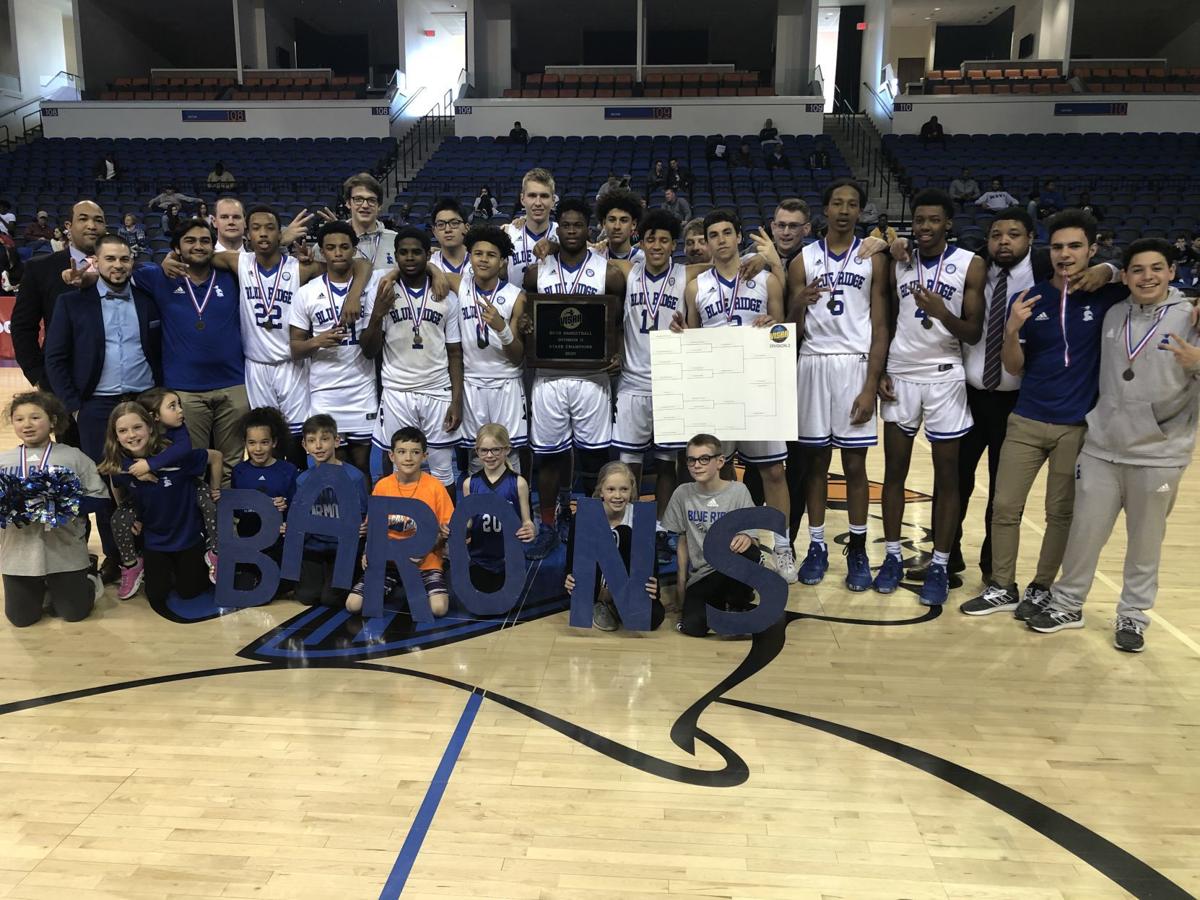 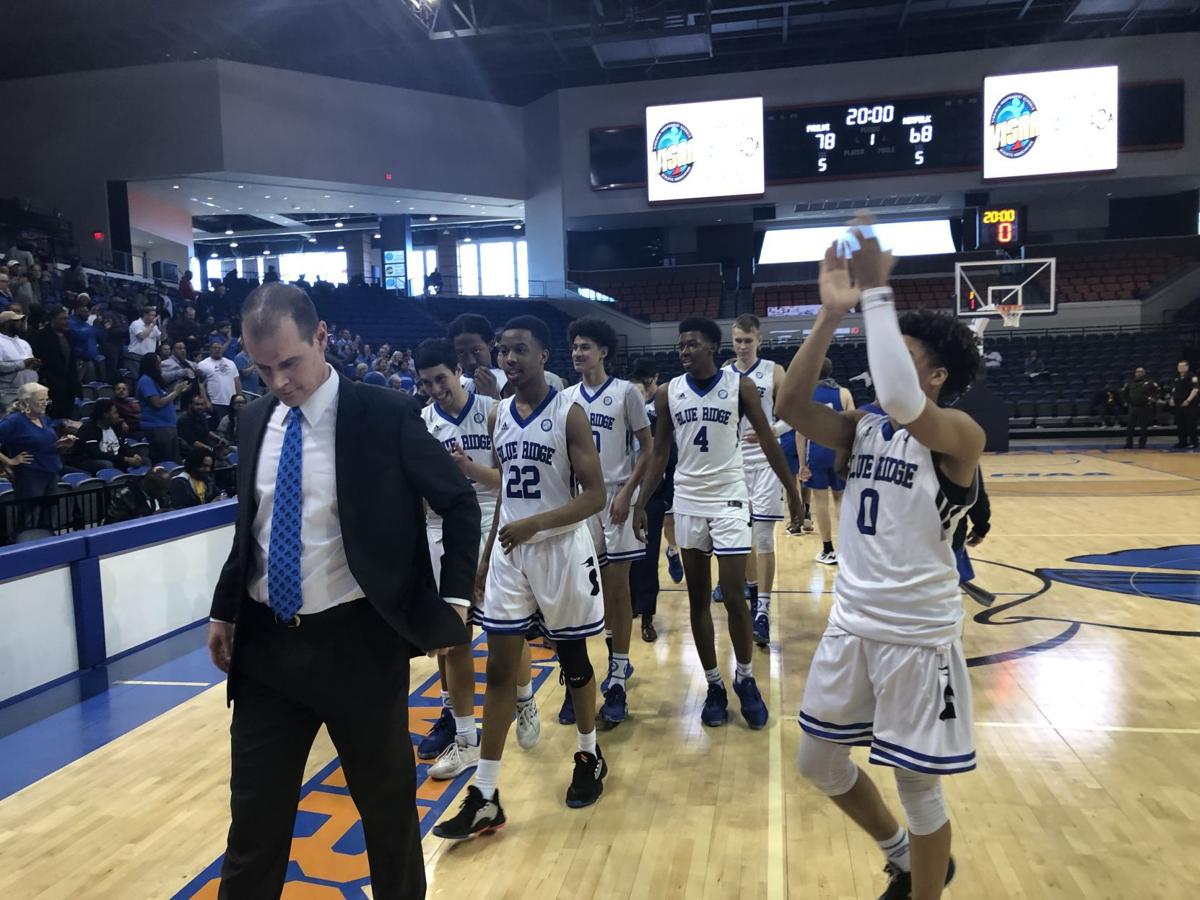 The Blue Ridge basketball team walks off the court after winning the VISAA Division II state championship on Saturday at Virginia State University.

ETTRICK — Coaches preach to their players that one of the hardest things to do in sports is to repeat as champions.

After winning a state championship last season, the Blue Ridge boys basketball team not only believed that they could repeat this season, they embraced the challenge.

Michael Gray scored 20 points as the Barons rolled to a 78-68 victory over No. 3 seed Norfolk Collegiate on Saturday afternoon at Virginia State University to secure consecutive championships for the first time since the 2001-2002 season.

“It’s just as special, because it’s hard to go back-to-back,” Gray said. “Teams are looking at you as the big dog, and just being able to knock those guys down again and getting back here, it’s just crazy.”

The message was delivered back in November during preseason camp as Coach Cade Lemcke encouraged his team to embrace being state champions. Lemcke put “Embrace the target” on the team’s warm-up shirts and they went into every game focused on the task at hand.

Blue Ridge (30-5) left its mark early in the first quarter, bolting out to a 14-6 lead midway through the opening stanza. William Lee sparked the run with a pair of 3-pointers against the Oaks’ zone defense.

“This is my last year and I went out with a bang,” Lee said. “I played exactly how I wanted to. We as a team, we were locked in. We had a great shootaround this morning and we were so focused. I’m so happy I went out like this.”

Norfolk Collegiate (27-4), which is coached by former University of Virginia standout Junior Burrough, answered with an 8-2 run, including four from Nathan Tebay, to trim the lead to 16-12 after one quarter.

The Barons used a 15-5 run, led in large part by their pressure defense, to extend the lead to double digits at halftime. Sasha Glushkov and Gray led the charge with four points apiece as Blue Ridge built a 31-17 advantage.

“We played with great effort on the defensive end,” Glushkov said. “Though they made some tough shots, but our main focus was defense. We made them make tough shots and we played great defense overall.”

The third quarter was more of the same as Glushkov scored six points and Derrick Jones capped a 14-6 run with a two-handed dunk as Blue Ridge built a commanding 45-25 lead with 3:59 left in the quarter. Maliq Brown and Glushkov also joined the dunk party in the third as the Barons led 54-35 win eight minutes to play.

Norfolk Collegiate didn’t go away quietly, thanks to the inspired play of leading scorer Jordan Battle. The senior guard scored 22 of his game-high 28 points in the final stanza to try and spark a comeback.

Jones converted a pair of layups and the Barons went 8 of 10 from the free-throw line over the final 1:45 to seal the victory.

In the final minute, senior Andy Nwaoko made his first appearance in the game to a standing ovation from fans and his teammates. The senior forward suffered a knee injury in Friday’s semifinal win over Middleburg Academy that kept him out of the lineup Saturday.

For Glushkov and his teammates, it was important for Nwaoko to join them on the floor at the end of the game.

“It was special,” he said. “It was special for our boy Andy, who got injured yesterday. We knew we were going to get this ‘W” for him.”

Nwaoko admitted it was an emotional moment for him too.

“Coach always talks about team spirit,” he said. “For me, I just hoped we won. It’s always been about team for me and if we win, I’m happy. We’re a team. Seeing these guys have so much love for me as teammates, that’s a feeling that I’m never going to forget.”

The win gives Blue Ridge it’s 15th state championship overall and seventh in basketball. The seventh title joins Carlisle School as the most in VISAA history.

“It’s a great group of guys,” Lee said. “We’re all disciplined. We’re all ready to learn and ready to work. At practice every day, we brought [the energy] and we were rewarded today.”

Lee finished with 17 points for the Barons in his final high school game. Glushkov and Jones each posted 12 points and Brown added nine.

Gray credited the team’s versatility for making one another better.

“Everybody has something that they’re just super special at,” Gray said. “They can do things that a lot of people in that state can’t do. I’m just so happy I was able to play with these guys.”

“Every practice was harder than the game,” he said. “The way we pushed each other every day at practice, that was the most talented group that I’ve played with for the last three years. The talent level was so high and the fight they played with is something I’ll always remember.”

The Virginia football team's annual rivalry matchup with Virginia Tech will be held in September this season.

The Virginia football schedule, which was revealed on Thursday morning, is unusual in many ways, but these five aspects of the revised 2020 slate jump off the page.

Bernie Floriani, a former UVa basketball walk-on, died Thursday after a battle with ALS. He leaves in his wake an abundance of memories and life lessons for former teammates and young players lucky enough to cross in his path.

The Virginia football team brought in five talented transfers on the offensive side of the football, and there’s a chance all five see playing time the next time the Cavaliers take the field for a game.

UVa commit Jack Witmer recently wrote a letter to his parents, thanking them for everything they’ve done. The result was a nice moment with his family and a chance to watch one of the NFL’s top tight ends break down his game tape.

The UVa men’s soccer program announced its incoming 2020 recruiting class Thursday, bringing in 13 new players to a team that made the national championship match a season ago. Interestingly, five of those newcomers are transfers.

A day after learning what its revised 2020 schedule will look like, the Virginia football team announces that will begin fall camp on Monday.

Ahead of Aug. 12 anniversary, Virginia football program aims to “Take Back Our Grounds”

Virginia’s football program wants to be a catalyst for change in the community, helping to turn the pain of Aug. 12 into a celebration of life, love and unity.

The Blue Ridge basketball team walks off the court after winning the VISAA Division II state championship on Saturday at Virginia State University.