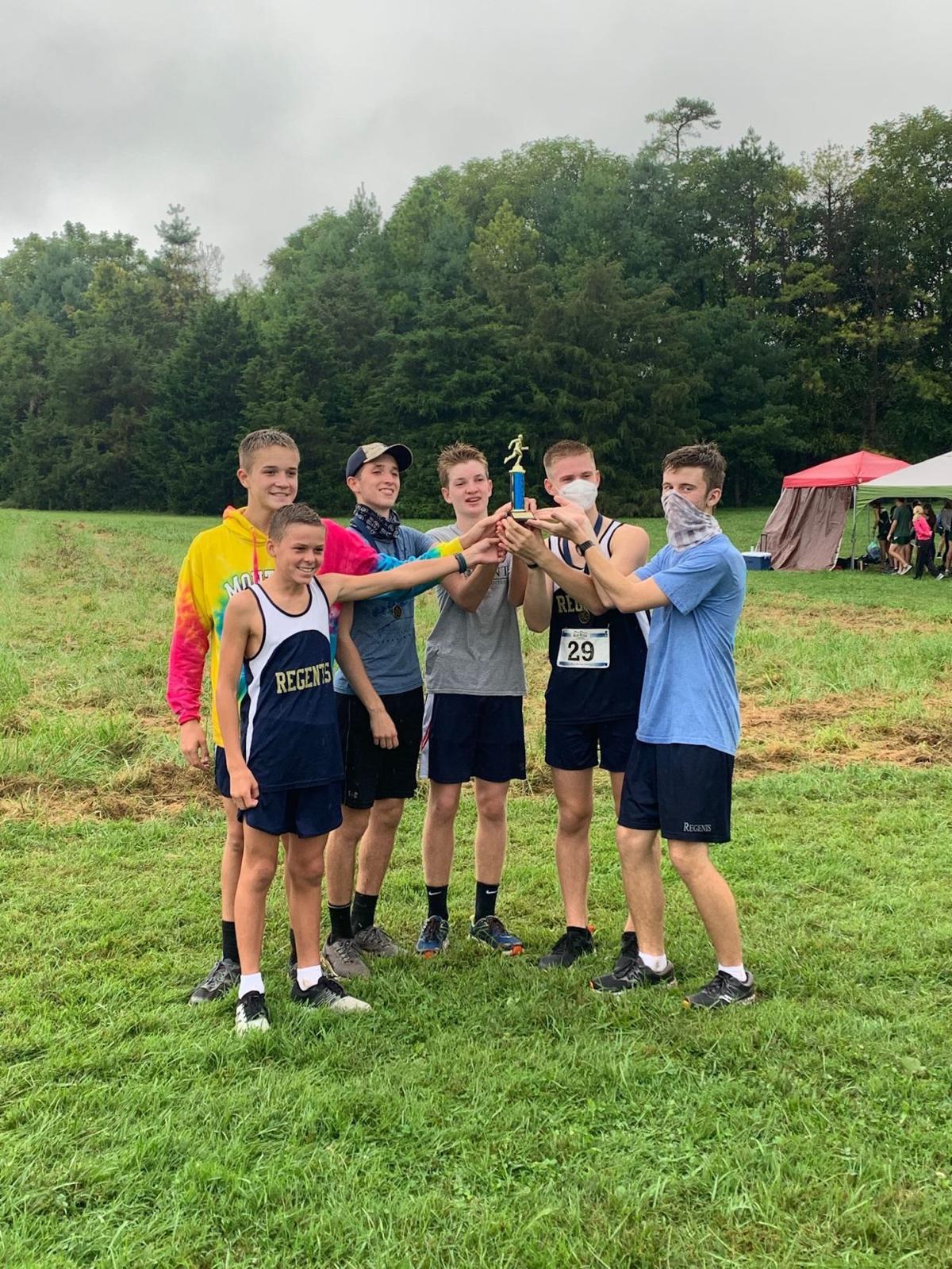 Katie Ratcliffe admitted there were plenty of butterflies floating around in her stomach Saturday prior to the Grace Christian Invitational cross country meet.

It had been nearly seven months since she had competed in a high school athletic event because of the COVID-19 pandemic and was unsure what would happen.

“We have been training since we got out of school and it was, at times, difficult to keep up the intensity with no races in sight,” Ratcliffe said. “When the race director fired the gun, it felt almost like a mini-revival to the pent up competitiveness in me.”

That initial sprint off the starting line rekindled that drive and Ratcliffe’s instincts took over as she captured top honors in the girls race with a time of 19 minutes, 37 seconds to lead the Crozet Crew girls team to the victory.

“I was not only excited, but also nervous to compete again,” Ratcliffe said. “Since I hadn’t [raced] in so long, I almost forgot the feeling and wasn’t sure it would come back. It definitely did and it felt amazing to use some of what I’d been training for. My teammates and I were extremely grateful to have the chance to race again.”

The Crozet Crew is a group of young distance runners committed to continuing their training and racing in a safe manner that is respectful of the greater Crozet and Charlottesville communities. The team, which consists of mostly Western Albemarle High School runners, is not affiliated with the high school cross country program, but serves as a way for runners to train until the public school cross country season begins in late February.

Coach Katie Pugh said the idea for the group came about this summer as the girls were in the midst of offseason workouts, which were shut down in August while the Virginia High School League met to finalize plans for the upcoming school year.

“During those out-of-season practices, the coaches learned how to conduct practices that were safe for the players and coaches,” Pugh said. “Once school practices were canceled, we heard from a lot of parents and athletes that they would like to find a way to continue training in a safe manner.”

That prompted the birth of the Crozet Crew, a club track program affiliated through USA Track & Field for both boys and girls from various high schools in Central Virginia. During the process, Pugh and the club’s coaches went through various training modules to become certified to help runners train safely and effectively during the pandemic.

“Once we established the club, we started meeting three to four days a week with extremely strict safety measures in place,” Pugh said. “Each team member’s temperatures are taken before practice and they must wear a mask at all times, except when they are actually running. They never run in groups, the most that they run together is three people, and they always run side-by-side to avoid drafting. In the club rules, if anyone violates these rules, they are suspended from the team for a week.”

All the practices culminated in a fantastic showing last Saturday as the Crozet Crew girls team turned in a dominating performance to post a victory in the three-team field at Coyner Springs Park in Waynesboro.

The girls took home the top four spots and seven of the top 10 as the Crew (16) edged Grace Christian (49) and Fredericksburg Christian (77) for the team title.

Stutzman raced a few weeks ago at Green Hill Park in Salem, the location of last year’s VHSL Class 3 state cross country championship. She said that experience, even if it was in a slightly different environment was extremely fun and prepared her mentally for last Saturday’s race.

“Finally taking the line after such a long drought was especially exciting,” she said. “To me, that felt like the moment that I would finally see some kind of culmination for the work that I had been putting in since March.”

Pugh and her co-coaches, Cherie and Chuck Witt, were impressed with all aspects of the meet, including eighth-grader Sadie Adams’ runner-up finish in the middle school two-mile race.

“I really learned to value every chance you get to compete,” she said. “It’s not every day right now that you get to compete in any sporting event, so my team and I are just really lucky to be able to have the chance to.”

Pugh said the Crozet Crew girls team will compete in approximately eight competitions this fall, including local races such as the recent Women’s Four Miler to more specific high school meets such as the Fork Union Invitational, which is slated for next month.

“For all competitions, the safety guidelines are extremely strict and masks are worn to the starting line and put on again as soon as they finish,” Pugh said. “Some races are staggered and timed, while other permit the team to run together, but drastically limit the number of participants in any one race.”

In the boys’ race, Regents School of Charlottesville had two runners place in the top 10 as the Lions (28) edged Grace Christian (38) and Fredericksburg (54) for the team championship.

The two seniors were ecstatic with their results.

“For some of us, it’s been over a year since we have competed in an organized sport,” Hoover said. “I missed every part of racing. Not only were we able to enjoy each other, but we were able to support teammates and opponents as well.”

“It was amazing to get back out there and race,” Rose said. “Usually before a race, I get jitters, but this time, I could barely stand up because I was so excited to compete. I was even able to talk to some of the opponents and was embraced by kindness. That is something I’ve missed, the brotherhood aspect.”

Unlike the Crozet Crew, Saturday’s race counted as the start of the private school season for Regents. Coach Mason Muur said the team has scheduled five meets in preparation for the VACA state meet, which is slated for Oct. 2 at Coyner Springs Park.

“Some of our meets will look like traditional cross country races, while other meets will only allow one team to run at a time,” he said. “We are thankful for both of these opportunities.”

“I have struggled to put into words how great it was to see the kids run in the meet,” Muur said. “They have been putting in work for over a month now in practice, so for them to finally get a chance to compete was special. We have really embraced the opportunity to run this year. The students have responded with thankfulness and an eagerness to compete. It was encouraging to see them work so hard and have a blast doing it with their teammates.”

New Zealand native Taine Murray, who listed as a four-star recruit by Rivals, verbally committed to the Cavaliers on Sunday morning.

Stanardsville angler James Maupin reeled in a lot of bass, a first-place trophy and a nice payday last week as he won the Toyota Series at the Potomac River tournament in Marbury, Maryland.

'It wasn't even close': Fuente says COVID was under control for Hokies until students returned

“We have been really, really good all summer long and all through fall camp. I can tell you that much. We were knocking it out of the park.”

Sharing the news of the postponement of the Virginia Tech game wasn't easy for UVa coach Bronco Mendenhall, in large part because of how well the team has done following COVID-19 protocols.

What to expect when the VHSL Executive Committee meets on Thursday

After months of discussions between the Virginia High School League and its member schools, a decision is expected Thursday on the VHSL's championship plus-one schedule proposal for the 2020-21 school year.

Joe Reed stepped onto the field Sunday for the first time in his NFL career and quickly showed what Virginia fans have seen for years: he’s a gifted kickoff returner.

The first AP top 25 poll of the season reflecting the teams not playing this fall was released Sunday. While the Virginia football team was unranked, the Cavaliers sit on the brink of breaking into the top 25.

After originally being moved to the start of the season, Virginia’s rivalry game with Virginia Tech is returning to the end of the season.