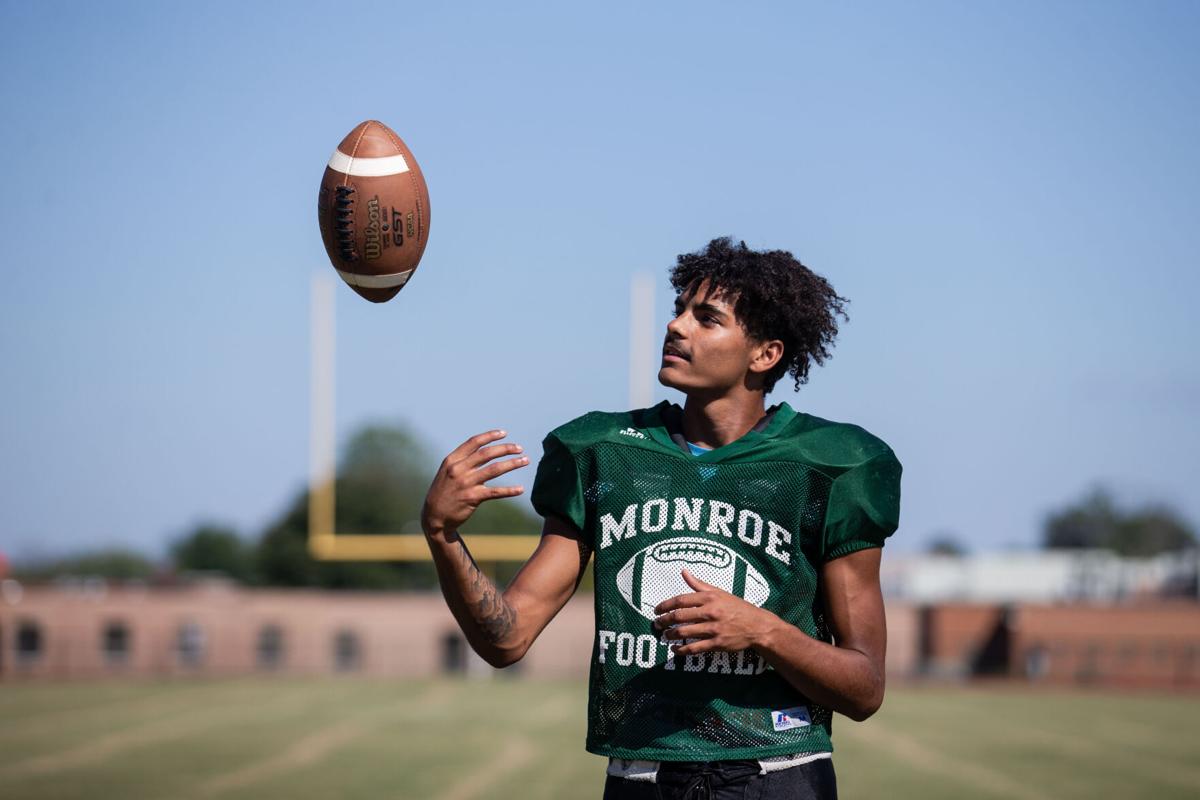 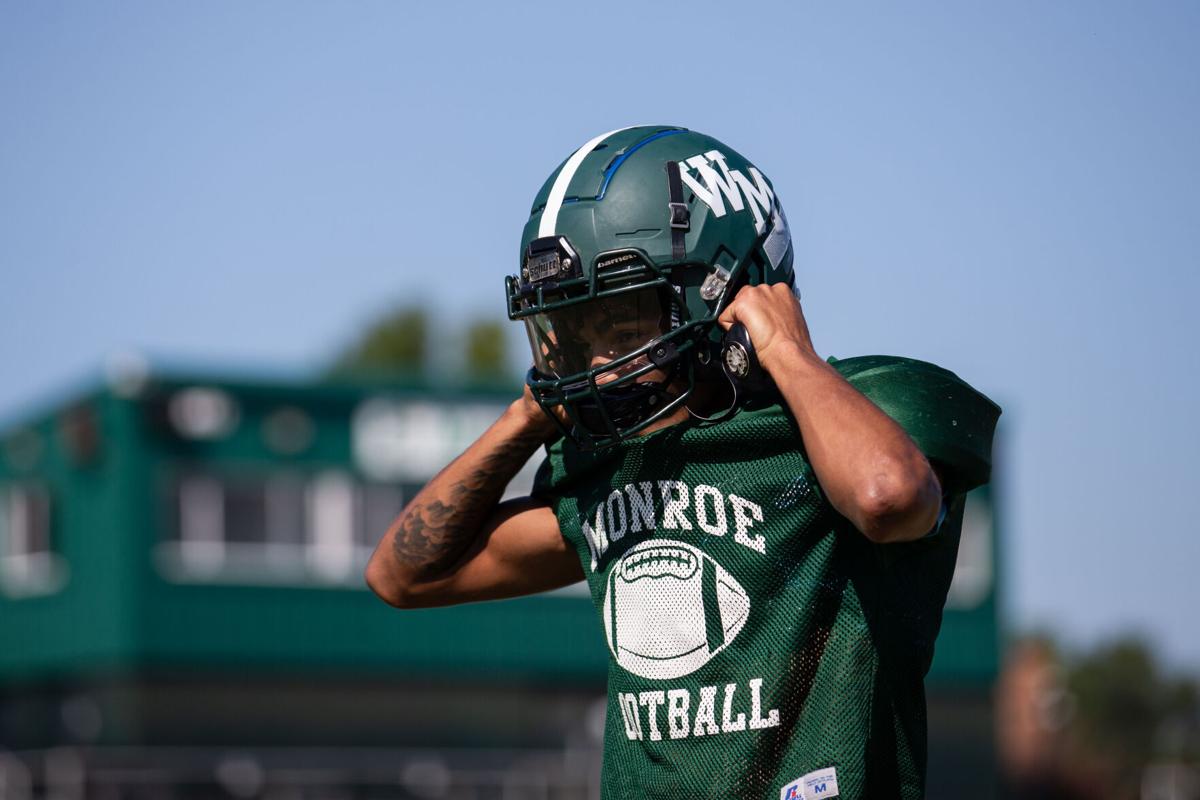 STANARDSVILLE — Two things coaches want from their players, regardless of sport, is effort and attitude.

“He has an energy about him that lifts up everyone around him,” William Monroe football coach Mitchell Morris said. “Even outside of football, he is one of our players that leads the student section at other sporting events. He is the same guy, every day and always shows up ready to work.”

Jones has been a fixture in the Greene Dragons’ boys basketball program for the past three years. Last spring, however, he decided to join the William Monroe football program and become a dual-sport athlete.

It wasn’t Jones’ first experience playing football. He grew up in Pittsburgh and played football from the age of 5 until he was 12 years old.

Jones’ pigskin passion came in large part from his grandmother.

“My Nana and I always watched the Steelers on Sunday and she never missed one of my football games,” he said.

In 2015, Jones lost his grandmother, and his love for the sport.

“I stopped playing when my Nana passed away,” Jones said. “I hadn’t played since because I thought it wouldn’t be the same without her there cheering me on from the sidelines.”

All of that changed last season when Jones made his varsity football debut for William Monroe.

“I have always loved football,” Jones said. “My friends encouraged me to play football for the school. Once I began to play again, I remembered why I love the game.”

Jones made an immediate impact and was a fixture in the defensive backfield as the Dragons made a playoff push before the season was canceled because of COVID-19.

“Troy is a great kid,” said Morris, who is in his first season as William Monroe head football coach. “He decided to come out for football last spring and has picked the game up quickly. Troy has established himself as one of the team leaders and he’s one of the guys on the team that makes us go.”

After a strong first season with the Dragons, Morris has expanded Jones’ role this fall, utilizing him on the offensive side as an option in the backfield. The senior has made the most of that opportunity thus far. He scored a pair of touchdowns in last week’s victory over Spotswood, including the game-clinching touchdown in the fourth quarter.

“I enjoy being a running back,” Jones said. “Anytime I get to put my hands on the football is a great feeling. I mostly have played defense in the past and loved every minute of it. This year is the first time I have been given the opportunity to try offense and I am enjoying every minute.”

Morris said Jones’ impact is felt all over the field.

“Troy does a ton of things for us on all phases of the ball and had a huge impact on all three phases,” Morris said. “Troy has been an instrumental part of the program.”

Jones’ ability to impact a game with his energy draws comparisons to one of his favorite football players growing up.

“I was born in Pittsburgh, so I am a fan of the Steelers,” Jones said. “I watched Troy Polamalu a lot. His energy and speed was amazing. He also was big on hyping his team up, which is one of my favorite things. He also works a lot with children in the community.”

Jones leads by example, but preaches to his teammates the importance of taking advantage of every opportunity they have to play the game.

“I am trying to give 100 percent at all times,” he said. “I want our team to feel that no matter the outcome, we played our hearts out. I want people to say that team played to the very last minute and never gave up.”

That philosophy was put to the test this past summer when his teammate Joshua Johnson died during a family vacation. Jones said Johnson’s death has had a profound impact on him and his teammates.

“It has been hard losing a friend and a teammate,” he said. “Josh was a great friend and a great football player. We know that Josh is watching us and cheering us on. We will play this season for him. He will be a big part of my energy and motivation.”

While he is passionate about competing, Jones also likes to find fun off the field as well.

“I enjoy doing anything adventurous,” Jones said. “I love amusement parks. I enjoy the water. I love trying new things and going new places. Of course, sports is my biggest passion, but I do enjoy camping, boating and kayaking.”

A thrill seeker, Jones has been to a handful of amusement parks during his life, including Kings Dominion and Six Flags, and is always up for an adrenaline rush. His favorite ride is the Dominator at Kings Dominion.

Jones also fancies himself as a handyman. He has enjoyed the trade school classes he’s taken at William Monroe, which have given him career options after high school.

Jones also enjoys helping his grandpa with things around the house. That connection is important to Jones, who has three tattoos that reflect the deep love he has for his family.

“I have always wanted to get one. It took me a long time to decide to do it and what exactly I wanted,” Jones said. “The tattoos that I have mean a lot to me. They are about how important family is. My family is close and they are my biggest fans. I know they will do anything for me and I would do anything for them.”

Jones’ family will be there for him as he continues to consider his options after graduating from William Monroe.

“I would love to continue to play sports after high school, but as of today, I have not 100 percent decided what I really want to do,” Jones said. “I do know that whatever I decide to do, I will continue to play or coach sports. I would love to teach and coach kids in basketball or football, or who knows, both. If college is in my future after high school, I think a physical education teacher would be a great fit for me.”

Regardless of where his future takes him, Jones will take the challenge head on and with lots of energy.

“In my mind, hard work, teamwork, respect, determination and heart are what makes a great football player,” Jones said. “You must put in the effort and sweat and help your teammates and love the game. It doesn’t matter if you win or lose, if you play with heart, you are always a winner.”

It appeared as if Virginia was on its way to a fourth win the last five games until the Cavaliers collapsed in the second half.

Lafayette transfer tight end Steven Stilianos will be in Charlottesville for an official visit with the Cavaliers beginning Friday.