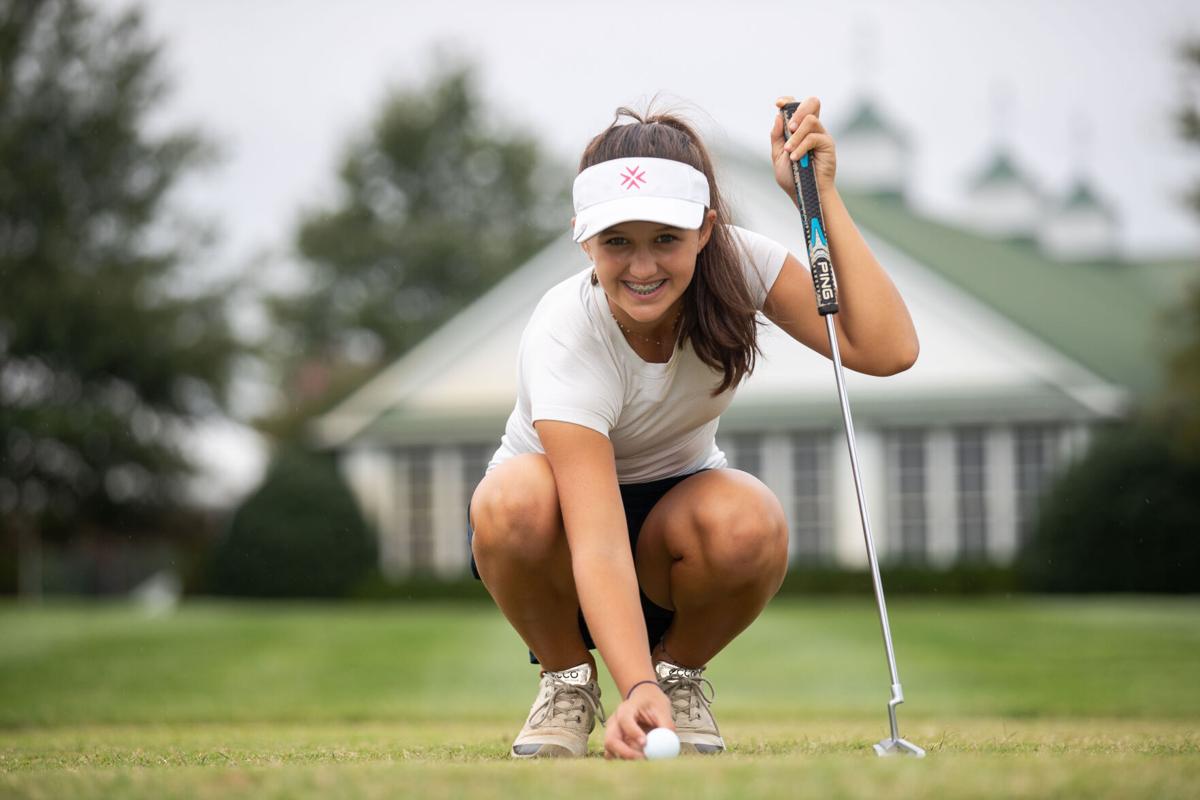 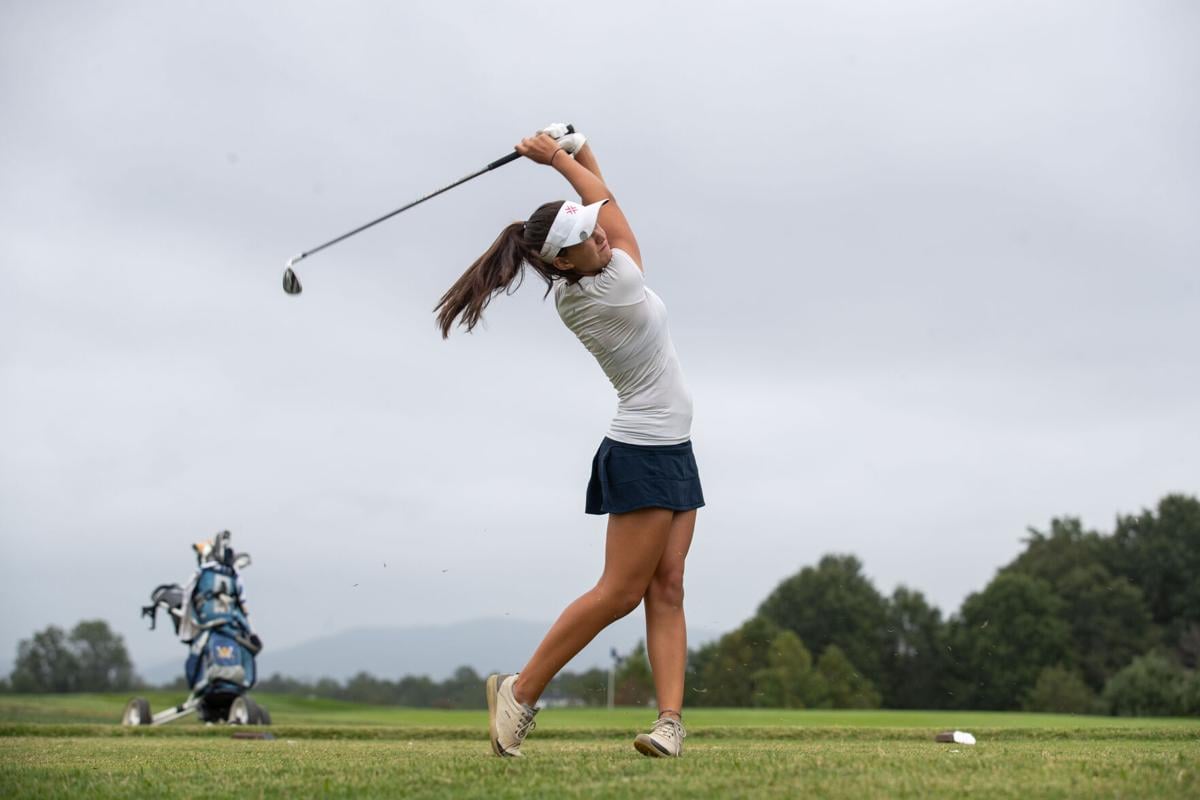 Elsie MacCleery started playing golf when she was five years old as a way to spend more time with her grandparents.

It didn’t take long for her to fall in love with the game.

“My parents signed me up for Kandi Comer’s golf camp and I was hooked,” MacCleery said. “Even though we were just hitting water balloons with plastic clubs, I thought it was the best thing in the world. My parents didn’t play golf, but my grandparents loved the game, so it was something fun that we could do together.”

MacCleery’s first round of golf came shortly after that camp with her grandparents.

“I was pretty young, so I don’t remember everything, but I do remember laughing a lot, hitting balls into the water on purpose and making sand angels in the bunker,” she said.

MacCleery quickly graduated from sand angles to sinking big putts. She took lessons from Comer and became a regular on the PGA Junior League circuit.

“This was my first real experience competing in golf and I came to realize how much I loved the competition,” she said. “I really enjoyed playing with other people and competing against them to see who could play the course better. There were not a lot of young girls playing at that time, so I typically had to play in tournaments with boys, but that never bothered me.”

MacCleery has continued to thrive playing against boys during her first season as a member of the Western Albemarle High School golf team. Earlier this week, the freshman was named Jefferson District Player of the Year after helping lead the Warriors to the district championship at Old Trail Golf Club.

“The district tournament was so much fun,” MacCleery said. “I love the energy of a tournament like that and having all the teams together competing and supporting each other was amazing.”

MacCleery has been a model of consistency for the Warriors this season. On Sept. 13, she set a new program record for the lowest 9-hole score with a 6-under-par 30 on her home course. During Monday’s district match, she carded a 2-under-par 69 over 18 holes to finish tied for second with Charlottesville’s Preston Burton and one stroke behind Albemarle’s Addie Doroh for individual medalist honors.

“I feel like I played very consistently in the tournament. I had four birdies and a bogey during the round,” MacCleery said. “I was one under par after 9 and I knew that I needed to try and get as many birdies as possible on the back 9. I felt like my game was strong and I hit 17 of 18 greens. I was putting solidly, but I unfortunately left one or two birdies out there. Approaching 18, I was one behind the leader and I knew I had to get a birdie. I had a great approach shot three feet from the hole and made the putt. But Addie Doroh sank a long birdie putt to put her 4-under par. It was a great round and I was proud of Addie for her success on the tournament.”

Western Albemarle coach Darren Maynard has been impressed with the poise MacCleery has shown on the links during her freshman season with the Warriors.

“Elsie has great powers of concentration,” Maynard said. “She has a unique ability to focus on her next shot. She plays with a quiet confidence. Elsie may be the most accurate player I’ve ever coached.”

MacCleery made her high school golfing debut in August and felt at home with the Warriors.

“As a freshman, I wasn’t sure what to expect with high school golf. It has been a great experience,” MacCleery said. “The boys on the Western golf team have been incredibly welcoming and it’s been an easy transition.”

MacCleery also enjoys the friendly rivalries between her male teammates and opponents, which bring out the best in her on the course.

“Boys tend to underestimate me as a freshman girl,” MacCleery said. “My favorite comment at a tournament this year on the first tee box was, ‘Ugh, I’m going to have to deal with playing against a girl the hole time. On the first green, I dropped the ball within inches of the cup and he said, ‘Great, now I have to deal with a girl beating me.’”

Maynard said MacCleery takes it all in stride.

“The way Elsie and Addi Ritter have fit in with our team has been fun to watch,” he said. “There’s a lot of friendly banter that goes back and forth and the girls give it right back when they need to.”

Being part of a team on the golf course has been a welcomed change for MacCleery.

“Until now, golf has been a very individual sport for me , which I love,” she said. “High school golf is giving me the opportunity to work as a team for a common goal. Our goal as a team is to make it to states and win.”

Maynard said MacCleery’s team-first attitude is evident on the course.

“She has been a pleasure to coach,” he said. “She is very team-oriented, which is awesome. She cares just as much about her teammates are doing as her own round.”

“I love seeing other girls on the golf course,” she said. “Many of them I have met through out individual tournaments. We are a small and close community that supports each other, on and off the course. I hope that the game keeps growing and that more and more girls will try the sport and not be intimidated by the fact that there is not a girls golf team.”

MacCleery said that helping get more girls involved is golf is one of her primary focuses.

“I want to participate in helping to grow the sport for girls,” MacCleery said. “I regularly volunteer at Orchard Creek in Waynesboro to support young golfers to encourage and inspire them to keep playing the game.”

MacCleery credits Comer, her golf coach and mentor, for cultivating the love of the sport.

“Kandi Comer is my coach and someone that I look up to and admire,” MacCleery said. “I’ve been taking lessons with her since I was five and she taught me everything I know about golf. She’s had a great career in golf and is being inducted in the Virginia Golf Hall of Fame this month. I feel so lucky to have her as a mentor.”

Another person that MacCleery looks up to is her younger sister, Kennedy, a seventh-grader at Henley Middle School. The two siblings share the love of golf and support one another.

“We spent hours together on the course, working on our game,” she said. “She is always encouraging me and challenging me. She is a great golfer with a + 0.4 handicap. I can’t wait to have her with me on the team in two years.”

MacCleery’s favorite course to play is Pine Needles at Pinehurst. Last August, she played in the Peggy Kirk Bell Tour championship there and earned a top-10 finish with a score of 1-under par.

“It’s a challenging course, but it first well with my game,” MacCleery said. “The Women’s U.S. Open is there in 2022 and I will be there. I can’t wait to see how the professionals play it.”

Off the course, MacCleery enjoys spending quality time with friends and family. She’s an avid reader and enjoys working out and getting stronger for golf. She also loves to ski and you will likely find her on the slopes in the winter.

The freshman also is active in her school community. MacCleery is involved with “We the People,” Model UN and Young Life. Recently, she was elected as a class officer. Her favorite classes are Algebra II/Trigonometry and Spanish II. Her goal is to someday become fluent in Spanish.

On the golf course, she hopes to continue to find success with the Warriors as well as in regional and national tournaments and beyond.

“I have really loved being part of a team and I hope to play golf at the collegiate level,” MacCleery said. “My biggest dream has been to play on the LPGA Tour, but I plan on getting an education first. Sports psychology is an area that’s always been interesting to me. The mental game is such an important part of any sport and I would love to be able to work with athletes on this.”

Just like renowned sports psychologist Bob Rotella, MacCleery understands that golf is not a perfect game and there’s always ways to improve.

“There is not a single perfect golfer or game out there,” she said. “But a successful golfer has a strong mental game, killer work ethic and most importantly, a love for the sport.”

2021 Heisman Trophy Market: Where is the value?

Who should take over at LSU?

Who should take over at LSU?

Lamar Jackson has most wins of any QB under 25

Lamar Jackson has most wins of any QB under 25

The Virginia football team shuts out Duke 48-0 to earn its third straight win.

Backup kicker Brendan Farrell breaks the rock after another solid performance, the defense comes up big plus other notes from Virginia's 48-0 win over Duke.

Wake Forest, N.C. State and Pittsburgh sit atop the ACC power poll, while preseason Coastal favorites North Carolina and Miami are near the bottom.

With Saturday’s 48-0 win over Duke, Bronco Mendenhall moved his overall record as Virginia’s head football coach to 35-34. For the first time in his tenure, Mendenhall’s record at Virginia is above .500.

Barber: Virginia gets its 'swag back' in blowout of Duke

“We’re a confident team right now. And I think we’re playing like it.”

Louisa County rushes for 406 yards and four touchdowns in a 27-0 win over Western Albemarle that extended their Jefferson District winning streak to 31 straight games.